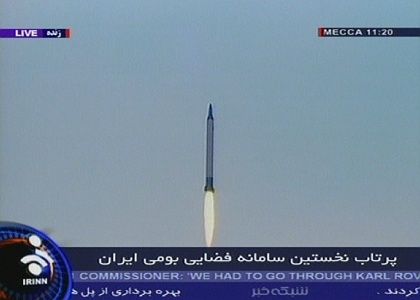 Could Iran be building an atomic bomb? When the US released a new National Intelligence Estimate (NIE) late last year, it seemed as though the danger of a mullah-bomb had passed. The report claimed to have information indicating that Tehran mothballed its nuclear weapons program as early as autumn 2003. The paper also said that it was "very unlikely" that Iran would have enough highly enriched uranium -- the primary ingredient in atomic bombs -- by 2009 to produce such a weapon. Rather, the NIE indicated "Iran probably would be technically capable of producing enough (highly enriched uranium) for a weapon sometime during the 2010-2015 timeframe."

It didn't take long for experts to question the report's conclusion that Tehran was no longer interested in building the bomb. And now, a new computer simulation undertaken by European Union experts indicates that the NIE's time estimates might be dangerously inaccurate as well -- and that Iran might have enough fuel for a bomb much earlier than was previously thought.

As part of a project to improve control of nuclear materials, the European Commission Joint Research Centre (JRC) in Ispra, Italy set up a detailed simulation of the centrifuges currently used by Iran in the Natanz nuclear facility to enrich uranium. The results look nothing like those reached by the US intelligence community.

For one scenario, the JRC scientists assumed the centrifuges in Natanz were operating at 100 percent efficiency. Were that the case, Iran could already have the 25 kilograms of highly enriched uranium necessary for an atomic device by the end of this year. Another scenario assumed a much lower efficiency -- just 25 percent. But even then, Iran would have produced enough uranium by the end of 2010.

For the purposes of the simulation, the JRC modelled each of the centrifuges individually and then hooked them together to form the kind of cascade necessary to enrich uranium. A number of variables were taken into account, including the assumption by most experts that Iran isn't even close to operating its centrifuges at 100 percent efficiency. What is known, however, is that the Iranians are operating 18 cascades, each made up of 164 centrifuges. Iranian President Mahmoud Ahmadinejad himself said last April that the country had 3,000 centrifuges in operation. At the time, most Western observers discounted the claim as mere propaganda. But the International Atomic Energy Agency confirmed Ahmadinejad's assertion in November.

Another variable is the type of centrifuge Iran is using. For its simulations, the JRC assumed cascades using 2,952 P1 centrifuges -- the P stands for Pakistan, where the centrifuges were manufactured. But recent reports indicate that Iran might be in the process of installing so-called "IR2" centrifuges. These centrifuges -- the IR stands for Iran -- are made out of carbon-fiber instead of aluminium and are an estimated 2.5 times as powerful as the P1 devices.

It remains unclear, however, if the new centrifuges can be used in the same way as the old ones. Independent experts doubt whether Iran is able to produce the old-style aluminium centrifuges themselves. Given the strict embargo currently in place against Iran, it is possible that the centrifuges currently in use are still from the stock delivered to Iran by Pakistan. The Pakistani government admitted in March, 2005 that Abdul Qadir Khan, the scientist responsible for the Pakistani bomb, sold centrifuges to Iran.

Despite the uncertainties, however, the scientists at the Joint Research Centre are confident that their simulations are realistic. But, the group is quick to point out, they are theoretical. They don't make any claim to know whether Tehran is currently working toward the production of an atomic bomb.

Just why the new simulations came to such a different result than the National Intelligence Estimate issued by Washington is "a good question," a JRC expert told SPIEGEL ONLINE. The American government, he points out, wasn't clear about the technical details upon which its report was based.

Thin Line between Military and Civilian

Another possible reason for the differences could be the fact that the US intelligence report focused solely on uranium enrichment done in secret and on possible steps taken toward the production of a bomb -- but not on Tehran's claimed civilian nuclear power program. But the line between civilian and military nuclear programs is a thin one, as a number of states have demonstrated. The atomic weapons programs in Israel, South Africa, Pakistan and China all grew out of civilian nuclear programs.

There are a number of indications that Iran isn't just interested in civilian nuclear technology. Just on Wednesday, an exiled Iranian opposition group published satellite images it claims shows an Iranian atomic bomb-making facility. In January, physicist Richard Garwin, who is also a US government adviser, calculated that the Natanz facility -- even were it to reach its maximum capacity of 54,000 centrifuges -- could not produce enough low-enriched uranium for a nuclear power facility. But, he said, the 3,000 centrifuges currently in operation could be sufficient to produce enough highly enriched uranium for a weapon.

Iran's successful launch of a ballistic "research rocket" into space at the beginning of the month is likely doing little to reduce concerns. A rocket that can carry a satellite into space, after all, could be modified to carry a nuclear warhead.

Roland Schenkel, the director-general of the JRC, says it is time for European politicians to re-evaluate. It is time, he said in Boston during a weekend meeting of the American Association for the Advancement of Science, for the world's atomic powers to allow inspections of their nuclear facilities and to take steps toward disarmament instead of modernizing their nuclear arsenals. Both the US and Great Britain have recently invested large amounts of money in their nuclear weapons caches.

Schenkel would also like to see more competencies for the International Atomic Energy Agency. "The IAEA needs a real weapons control program," he told SPIEGEL ONLINE. As it stands now, the IAEA must focus solely on fissile material and on nuclear facilities. "The goal should be checks in the service of non-proliferation," Schenkel says. "The checks need to have more bite."

Many experts likewise believe that more checks need to be carried out in Iran itself -- a position that was not changed at all by the US intelligence report. "We judge with high confidence that in fall 2003, Tehran halted its nuclear weapons program," the report reads. But it is not this conclusion that is the most decisive one in the report. Rather, it was the final sentence: "We assess with high confidence that Iran has the scientific, technical and industrial capacity eventually to produce nuclear weapons if it decides to do so."