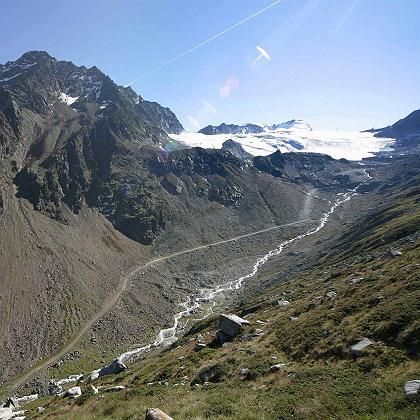 Glaciers across the globe are melting faster than at any point in the last century. Many could disappear within decades, and their decline could cause droughts and chaos for billions of people who depend on rivers fed by glaciers.

This was the sobering message delivered Sunday by the United Nations Environment Programme (UNEP), along with a plea to international leaders to act swiftly and drastically to address climate change, which the UNEP says is to blame for the glacial melt.

Glacial melt is the "canary in the climate change coal mine," said UNEP executive director Achim Steiner in a statement. "It is absolutely essential that everyone sits up and take notice," he said.

The announcement was based on a study that tracked glacial melt at nearly 30 glaciers across the globe. Some of the most dramatic losses were in Europe; Norway's Breidalblikkbrea glacier topped the list by shrinking 3.1 meters (10.2 feet) in 2006.

"The latest figures are part of what appears to be an accelerating trend with no apparent end in sight," Wilfried Haeberli, director of the World Glacier Monitoring Service, a Zurich-based research institute that conducted the study.

According to Haeberli, glacier thickness declined by an average of 0.3 meters a year between 1980 and 1999. But since 2000 the average annual ice loss has increased to about 0.5 meters (20 inches).

The study confims some of the worst-case climate change scenarios outlined in a sobering report released last year by the Intergovernmental Panel on Climate Change.

UNEP executive director Achim Steiner said glacial loss could have serious consequences for people who depend on them for water. Rivers in India, for instance, are fed by water from disappearing Himalayan glaciers.

"Millions, if not billions, of people depend directly or indirectly on these natural water storage facilities for drinking water, agriculture, industry and power generation during key parts of the year," said Steiner.

Steiner urged world leaders to commit to mandatory emissions cuts and to invest in green technology. The UN is currently overseeing negotiations on a climate change treaty to succeed the Kyoto Protocol, which expires in 2012. Those discussions began late last year in Bali, and international leaders are scheduled to gather next year in Copenhagen to finish drafting a succesor treaty.