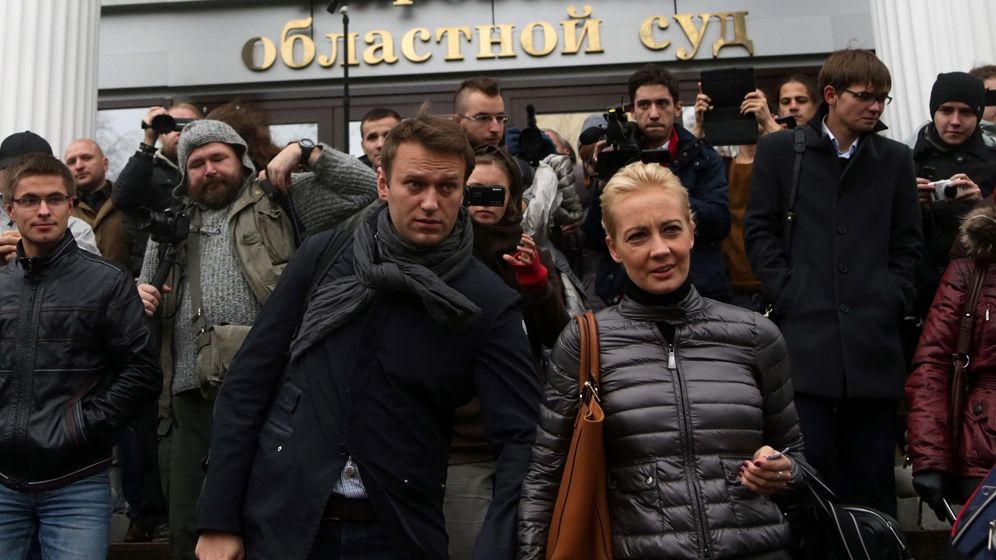 Alexei Navalny, a controversial leader of the Russian opposition who ran in Moscow's September mayoral elections, was given a suspended sentence on Wednesday. The blogger and vocal critic of Russian President Vladimir Putin had been found guilty earlier this summer of embezzling timber during his time as an adviser to Kirov's governor, Nikita Belykh. Many saw the charge as politically motivated. The court did not overturn the guilty verdict, but for Navalny, who was originally sentenced to five years in prison, the court's decision represents something of a victory.

The judge in Kirov announced his decision surprisingly quickly. Navalny had brought a bag, packed with clothing and a toothbrush, with him to Kirov in case he was handcuffed before leaving the court. It ended up being unnecessary.

When Navalny returns to Moscow, supporters may well give him the kind of triumphant welcome he received in July, the day after the judge in Kirov sentenced him to five years in jail. He had been immediately put into custody, but the next day, in a move that stunned the public, the prosecution requested Navalny be released for the duration of the appeals process.

"I don't know why Putin changed his mind either," said Navalny at the end of his appeal. The change of heart by the Kremlin continues to baffle people in Moscow. The only thing people seem to agree on, is that, as Georgy Satarov, the president of the well-regarded Moscow think thank Indem and a former adviser to president Boris Yeltsin, puts it, "the decision didn't belong to a judge."

Satarov told SPIEGEL ONLINE that the wrangling in the Navalny case shouldn't be blamed on contradictory decision-making by President Putin -- but rather on a "battle between different groupings in the ruling elite."

"Many people believe Russia is a dictatorship of one man, Vladimir Putin. But it's never been that -- it's just that over the years, the conflicts within the elite haven't been as open as they have been about Navalny. First, he was illegally convicted, and then a few days later he was set free, which was equally illegal. If those are the decisions of one and the same organ, you'd have to diagnose the state authority as being schizophrenic."

After Navalny received his unexpectedly severe sentence in July, about 10,000 of his supporters demonstrated in front of the Kremlin. According to the Navalny camp, his release on the following morning was a direct result of the protest, which, they claim, scared Putin. But more likely there was a dispute within Putin's leadership team.

Moscow's Mayor Sergei Sobyanin, wanted Navalny as a sparring partner for his election. Sobyanin had surprised the opposition by moving up the election, which was originally planned for 2015, to this year. He was hoping to use Navalny to give the election the appearance of legitimacy, and use a victory to recommend himself for higher posts. Vyacheslav Volodin, the first deputy chief of staff of Russia's presidential administration, supported the plan.

But the Kremlin was worried Navalny could use the trial and his severe sentence to gain political capital and become even more popular. Moreover, the legal argument against him was unconvincing -- even a witness of the prosecution said she thought the trial was "politically motivated."

Navalny Allies in the Government?

Does Navalny have allies in the Kremlin? "Not in the sense that they share his goals and ideals," says veteran Kremlin expert Satarov. He argues that, instead, there are "people who see Navalny as an instrument to use in their struggle against other groups.'

Shortly before the start of the appeal hearing, a reporter for the Moskovsky Komsomolets tabloid asked Navalny whether he "felt used" as a pawn in a bigger game. Navalny replied: "In truth I'm the one who's using all of the others. We're using the system to fight the system."

However it is doubtful that Navalny will readily be able to continue his political career. A suspended sentence is tantamount to "political isolation" thinks Ilya Yashin, an opposition politician and a long-time political ally of Navalny's. As a result of his conviction, Navalny's freedom of movement will be limited. He will be unable to travel abroad and he will not be allowed to participate in elections.

Navalny's fight for his own freedom is not over yet: A further case against him is pending in Moscow. Navalny and his brother ran a logistics business together and are now accused of conning the cosmetics company Yves Rocher out of 1.8 million dollars while providing transport services to the French firm. The Russian Investigative Committee, headed by Putin's confidant Bastrykin, is confident that the charges will be proven.