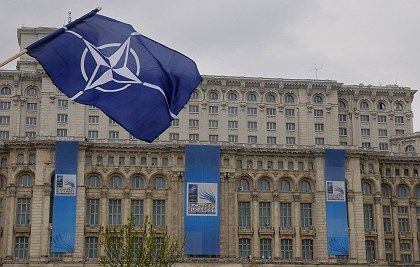 A NATO flag billows in front of the parliamentary building in Bucharest, where the 26 NATO leaders are due to meet for their three day summit.

With the 26 leaders of the NATO alliance gathering in the Romanian capital Bucharest for a three-day summit, it is already clear which issues are more likely to divide than unite the member states. From increasing troop levels in Afghanistan to eastward expansion, the notes of discord have been clanging loudly in advance of Wednesday's opening meeting.

Troop levels in Afghanistan are likely to be one of the biggest sources of tension at the meeting, with France already playing down expectations that it would commit to a significant number of extra troops at the summit.

In a keynote speech on Wednesday in Bucharest, US President George W. Bush called on his NATO allies to "step forward with additional forces" in Afghanistan, saying NATO could not afford to lose its battle with the Taliban and al-Qaida militants. At a later meeting with his Romanian hosts, Bush said: "We expect our NATO allies to shoulder the burden necessary to succeed. The question nations have to ask is, is it worth it? My answer is, absolutely it's worth it."

There had been hopes that French President Nicolas Sarkozy would announce a major new contribution to the 47,000-strong NATO-led force in Afghanistan, but these plans have proved highly unpopular domestically. On Tuesday, his Prime Minister Francois Fillon tried to dampen expectations, saying Paris was just looking to send several hundred more troops, while a French diplomat told the Associated Press that it was "premature" to speak of troop numbers until talks had been held with military planners about requirements.

However, with the Canadians threatening to pull out if major reinforcements are not forthcoming, there is increasd pressure on other allies to step up with more troops. The perceived imbalance between the risks taken by the US, British and Canadian troops in the volatile south compared to the German, Italian and Spanish, who have limited their forces to the more stable north and west, has proved a major source of friction within the alliance.

Another potential source of division is the US push for NATO to accept Ukraine and Georgia into its ranks. Germany and France are threatening to block moves to open up talks on membership with the two former Soviet states, arguing that they do not yet meet the criteria and that such a step would needlessly antagonize Russia.

On Tuesday French Prime Minister Fillon gave the clearest indication of French resistance. "France will not give its green light to the entry of Ukraine and Georgia," he said, adding: "We think that it is not the correct response to the balance of power in Europe, and between Europe and Russia." And on Wednesday, German Foreign Minister Frank-Walter Steinmeier warned against further burdening relations with Moscow, which are already strained over Kosovo, as well as US plans to build a missile defense shield on Russia's doorstep.

These issues are likely to top the agenda when outgoing Russian President Vladimir Putin meets with the NATO leaders on Friday as well as during his meeting with President Bush in the Russian resort town of Sochi on Sunday. Asked Wednesday if the Sochi meeting could be a "diplomatic trainwreck," Bush replied: "You call it a diplomatic trainwreck, I call it an opportunity to sit down and have a good frank discussion again."

Meanwhile Greece is threatening to veto NATO membership for Macedonia unless a last-minute deal is found to change the name of the candidate nation, which it currently shares with a Greek province. "We have said, no solution means no invitation," Greek Foreign Minister Dora Bakoyannis told reporters in Athens on Wednesday.

The dispute should not affect plans to invite Croatia and Albania to join the alliance. However, diplomats told the Associated Press that there were concerns any exclusion of Macedonia could exacerbate tensions in the Balkans, already running high after Kosovo declared independence six weeks ago.