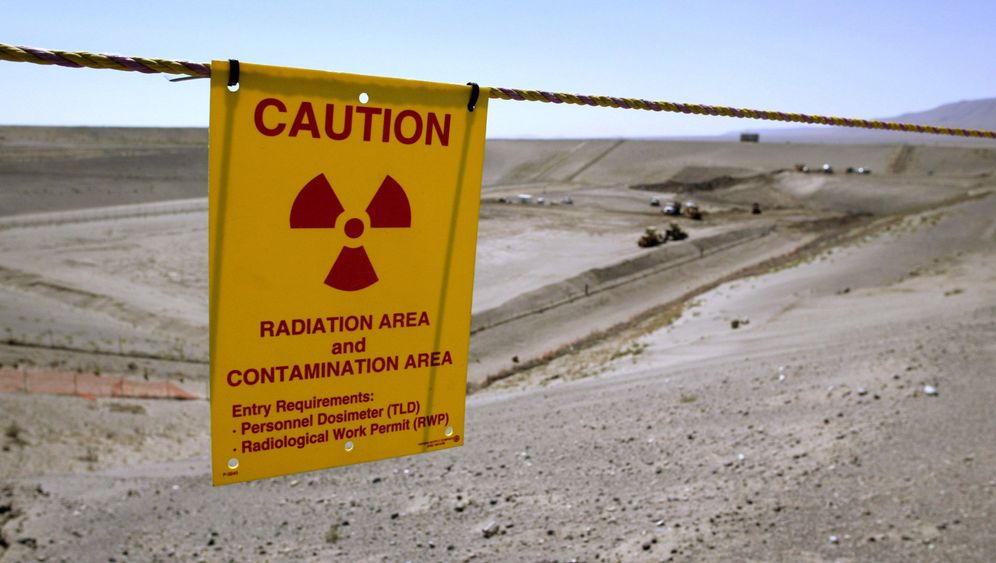 The lambs were born without eyes or mouths. Some had legs that had grotesquely grown together; others had no legs at all. Many were stillborn. Thirty-one were lost in a single night.

On a pasture nearby, a cow was found dead, stiff and with its hooves bizarrely stretched up into the whispering wind. Down by the river, men of the Yakama tribe pulled three-eyed salmon from the Columbia. Trout were covered in cancerous ulcers.

And then the babies started getting sick.

It was in the spring of 1962 that farmer Nels Allison first noticed something was ominously wrong. "Son of a bitch," he said to his wife. Sheep were always "the first to lie down and die" when something was amiss on Allison's farm near Basin City, a rural town near the Columbia River in the far northwestern corner of the continental United States. He started referring to that deadly night "the Night of the Little Demons."

Although the Allisons have long since passed away, the shock endures. As chronicled by journalist Michael D'Antonio in his 1993 book Atomic Harvest, their tale is one of thousands of horror stories that took place in the area surrounding Hanford, Washington, the site of America's first full-scale plutonium production facility. The site haunts the locals to this day -- and imperils them.

Hanford is America's original atomic sin. At this giant facility sprawled over 586 square miles (1,517 square kilometers), a four-hour drive southeast of Seattle into the vast emptiness of Eastern Washington, the United States once produced most of its nuclear raw materials for the Cold War. Though it was decommissioned in 1988, it remains the most contaminated location in the entire Western Hemisphere.

The US Department of Energy (DOE) recently revised its timetable for Hanford's decontamination, the biggest environmental cleanup in American history. The end date was moved back, once again. It now hopes to finally wrap up this Herculean task by September 2052 -- more than 108 years after Hanford was opened.

The nuclear catastrophe unfolding in faraway Fukushima has led many to raise questions about the safety of America's nuclear reactors. But one of the gravest threats lurks deep in the ground at Hanford, one of the final stubborn relics of the Cold War.

Even more worrisome is the fact that an active nuclear power plant -- the only one in the earthquake-prone Pacific Northwest -- sits on the edge of the polluted site. Indeed, Gerry Pollet, the executive director of the activist group Heart of America Northwest, says the combination of Hanford's legacy and potential seismic activity poses a "serious risk of harm."

These fresh worries are nothing new to the people of Richland, the closest town to Hanford, and the roughly 240,000 people living within the sparsely populated surrounding counties. Their grandparents already paid the price for permanent contamination and radiation: miscarriages, birth defects and rare childhood diseases.

Back in the 1960s, Juanita Andrewjewski, a farmer's wife, created a "death map" of the area near her house -- with crosses for heart disease and circles for cancer. Soon, the map was strewn with crosses and circles; at one point, there were 67 of them.

The Price of Peace?

Stewart Udall, who served as secretary of the interior under presidents John F. Kennedy and Lyndon B. Johnson, called Hanford the "most tragic chapter in American Cold War history."

Starting in 1943, an enormous building project created nine atomic reactors at Hanford, all of which still rise from the desert sand like fossilized dinosaurs. One of them, the B Reactor, was the first-ever of its kind.

This is where the United States, under conditions of utmost secrecy, obtained the plutonium used for the Manhattan Project. Hanford supplied the material for the first-ever explosion of an atomic bomb, the Trinity test at the White Sands Proving Ground in New Mexico on July 16, 1945. It also supplied the 14.1 pounds (6.4 kilograms) of plutonium-239 for Fat Man, the bomb that detonated over Nagasaki on August 9, 1945.

In the decades to follow, Hanford provided the plutonium for the entire nuclear arsenal of the US military. The freedom of the Western world depended on Hanford, it was said. It had been instrumental in ending World War II and was now keeping the Cold War cold.

That was apparently more important than people's health.

America was proud of Hanford. As a way of thanking them for their daily sacrifice, the employees and contractors at Hanford got little lapel pins in the shape of a mushroom cloud. D'Antonia recounts how the mushroom cloud was also the mascot of Richland's high school football team, the Bombers, and how there were local businesses called Atomic Bowling, Atomic Foods and Atomic Lawn Care.

But, today, that pride has turned into horror. The farmers in the area and people in Richland and the two neighboring towns, Pasco and Kennewick -- known collectively as the Tri-Cities -- are among the most highly radiated humans on earth.

It is a horrifying legacy. Fifty-two buildings at Hanford are contaminated, and 240 square miles are uninhabitable due to the radioactivity that has seeped into the soil and ground water: uranium, cesium, strontium, plutonium and other deadly radionuclides. Altogether, more than 204,000 cubic meters of highly radioactive waste remain on site -- two-thirds of the total for the entire US.

In one area, discharges of more than 216 million liters of radioactive, liquid waste and cooling water have flowed out of leaky tanks. More than 100,000 spent fuel rods -- 2,300 tons of them -- still sit in leaky basins close to the Columbia River.

The cooling water for the facilities came from that river. Until 1971, it was secretly pumped right back into it after only a minimum amount of treatment. High radiation levels were measured 250 miles (402 kilometers) further west, where the Columbia River flows into the Pacific. It was mostly Native Americans who ate the poisoned fish.

The plants also emitted radioactive clouds, which were carried by the wind all the way to Oregon, Idaho and Montana and even up into Canada. The people affected by the fallout, the so-called "downwinders," suffered the most during the initial phase, between 1945 and 1951, when they were irradiated with iodine-131, which slipped into the food chain through livestock, milk and eggs.

In addition, thousands upon thousands of workers, residents and farmers were deliberately contaminated -- for testing purposes.

On December 3, 1949, Hanford physicists released a highly radioactive cloud through the smokestack of the so-called T-Plant, the world's largest plutonium factory at the time. The radiation was almost 1,000 times more than what was released during the 1979 meltdown at Three Mile Island in Pennsylvania, the worst nuclear accident in American history. Fallout from the experiment, which was called "Green Run," drifted all the way to California. People wondered why they suddenly got sick.

Studies would eventually show that some babies at Hanford were radiated twice as much as the children of Chernobyl. Before the "Green Run," Tom Bailie, the 2-year-old son of a farmer loved to play in the fields. But then he suffered an inexplicable paralysis; later, he wouldn't be able to father children. His entire family died of cancer.

But it wasn't until 1986 that Bailie, with the help of a dogged reporter from the Spokesman Review, a regional newspaper, began to figure out why. It was the beginning of what would turn out to be a decades-long fight between the radiation victims and the US government. The victims sued the government and forced it to open its secret files. Some of the lawsuits have been consolidated into class-action suits and are still ongoing today.

When the Hanford site closed in 1988, the government launched a massive decontamination effort. The administration called it the "the largest civil works project in the history of mankind" -- as if that were something to be proud of.

Even today, the project still costs more than $2 billion (€1.4 billion) a year. For the 2013 fiscal year, $2.9 billion will be needed. The work is constantly interrupted by sloppiness, setbacks and accidents. In 2008, after two decades of cleanup, barely half of it had been completed. Only four of the nine reactors have been entombed. The outer zone is expected to be fully decontaminated by 2020, the tanks by the end of 2047.

And then, of course, there's still the active reactor. Online since 1984, it's considered one of the less safe nuclear reactors in the United States. After the catastrophe in Japan, its operator, the utility consortium Energy Northwest, claimed that the plant has several backup systems and could withstand a 6.9-magnituge earthquake.

Last year, there were 210 earthquakes in the Hanford area, the strongest measuring 3.0. But the fact that they aren't so severe does little to reassure environmentalists. "The leaking underground tanks and the contaminated groundwater moving toward the river mean a radioactive future for the river unless the mess can be cleaned up in time to avoid a serious radiological disaster," says Glen Spain, a regional director for the Pacific Coast Federation of Fishermen's Associations (PCFFA). "The legacy of vast amounts of nuclear waste … is still a ticking time bomb." 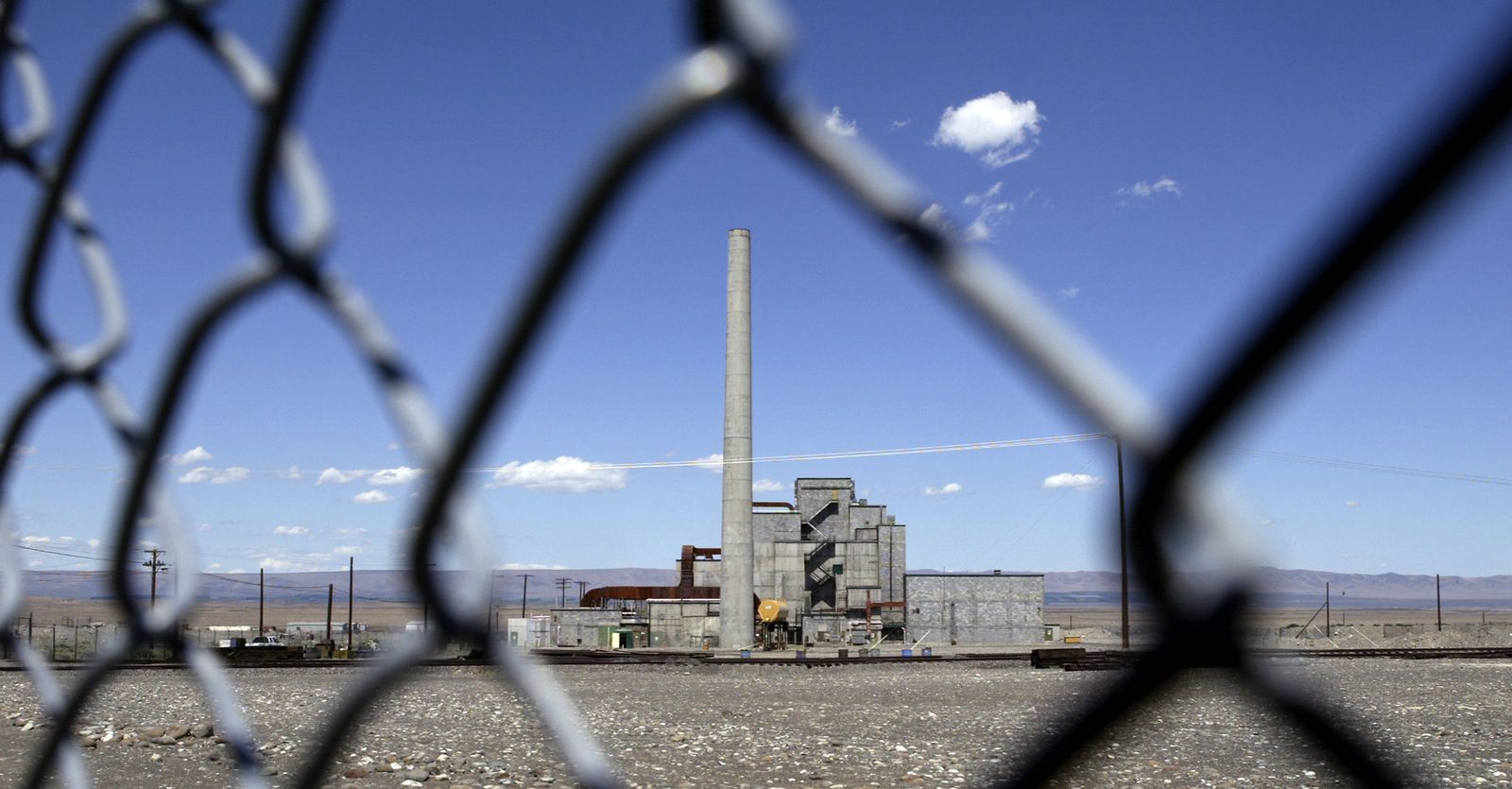 Starting in 1943, an enormous building project created nine atomic reactors at Hanford. One of them, the B Reactor (seen here), was the first-ever of its kind. This is where the United States created the plutonium used for the Manhattan Project. It supplied the 14.1 pounds (6.4 kilograms) of plutonium-239 for Fat Man, the bomb that detonated over Nagasaki on August 9, 1945. During the Cold War, it provided the plutonium for the entire nuclear arsenal of the US military.