Pakistani President Asif Ali Zardari's comments in the Washington Post on Tuesday were clearly directed against the United States. "Some in the US press have suggested that Pakistan lacked vitality in its pursuit of terrorism, or worse yet that we were disingenuous and actually protected the terrorists we claimed to be pursuing. Such baseless speculation may make exciting cable news, but it doesn't reflect fact."

The situation is deeply embarrassing for Pakistan: Osama bin Laden, the world's most-wanted terrorist, was tracked down in the heart of the country and, on Sunday night, killed by US Special Forces. According to US President Barack Obama's counterterrorism advisor John Brennan, bin Laden lived undisturbed for "five to six years" in the lavish compound on the outskirts of Abbottabad.

The Pakistani military was taken by surprise when American helicopters flew into Abbottabad, only sealing off the area after the mission was already underway and one of the US helicopters had crash-landed. "The first statements from the Pakistani army and the Inter-Services Intelligence agency (ISI) must have been made to save face," said an American diplomat in Islamabad.

'We Were Totally Caught by Surprise'

Finally, on Tuesday, ISI representatives admitted to SPIEGEL ONLINE that they had not been informed of the raid. "I have to say, unfortunately, that we knew nothing. We were totally caught by surprise." An ISI official also admitted that mistakes had been made in the search for bin Laden. The property was searched in 2003, when the house was built, but nothing suspicious was found. "We hadn't had it on our radar since then," the official continued. A courier for the terrorist leader had been living in the compound for some time, however, according to US information. The ISI official said the agency would now investigate how bin Laden could have been living undetected so close to a well-guarded military academy.

On Tuesday, the Pakistani government insisted that it was firmly on the side of the United States in the war on terrorism. A statement released by the Foreign Ministry makes it clear that the government of Pakistan knew nothing about the raid before hand. But, it says, "as far as the target compound is concerned, ISI had been sharing information with the CIA and other friendly intelligence agencies since 2009." The "intelligence flow" included information about "some foreigners living in the surroundings of Abbottabad." The assistance provided by the ISI, the statement continues, ultimately led to the killing of bin Laden, "a fact also acknowledged by the US President and Secretary of State," the statement says.

The ISI official reported that the agency had taken into custody a wife and a daughter of bin Laden, as well as "eight to nine children who are not bin Laden's children," whom the US Special Forces unit had left behind in the house after the raid. He was unwilling to specify where they were being held, "for security reasons."

Government officials said, however, that the women and children were being held "either in the ISI barracks in Abbottabad or at headquarters in Islamabad." According to the intelligence agency, investigations thus far make it seem unlikely that they will be charged with any crime. "However, we want to use the opportunity to find out as much as possible about Osama bin Laden." As soon as they had been fully questioned, ISI officials said, they would be released and deported to their native countries, Saudi Arabia and Yemen. In addition, the officials said that "a few documents" had been seized and were now being evaluated. However, the majority of the documents and the information on computer hard drives were in the hands of the CIA.

According to statements by both Washington and Islamabad, one of bin Laden's wives and three other men were killed in the attack. The ISI stated that the Americans captured one person alive, presumably one of bin Laden's sons. Bin Laden's 12-year-old daughter reportedly witnessed her father being killed by two bullets from a US soldier's weapon.

Officials in Washington do not believe Islamabad's claims that it had no knowledge of bin Laden's hiding place. It was "inconceivable" that the terrorist leader had not received any support from Pakistan, said Obama's counterterrorism advisor John Brennan. "We are looking right now at how he was able to hold out there for so long." Members of the US Congress have also expressed doubts over the Pakistani claim not to have known anything about bin Laden's whereabouts.

'The Most Dangerous Country in the World'

In the Washington Post piece on Tuesday, President Zardari wrote that Pakistan is "perhaps the world's greatest victim of terrorism." In fact, in recent years more civilians have been killed in terrorist attacks and more soldiers in counterterrorism operations in Pakistan than in Afghanistan.

On the other hand, the government in Islamabad has its own doubts about how honest the United States is being in the two countries' partnership to fight terrorism. Anti-Americanism has been on the rise in the country since late January, when a CIA contractor killed two Pakistanis in broad daylight in Lahore and then, in response to pressure from Washington, was released after the payment of blood money.

But now Pakistan comes across as the dishonest partner. Either the army and the ISI were truly unaware of bin Laden's hiding place, which would be embarrassing, or they knew about it and are now lying about it, which would be even worse.

For years, the United States has accused Pakistan of playing a "double game," by claiming, on the one hand, to be America's partner in fighting terrorism and collecting billions of dollars in related military aid from Washington while, on the other hand, secretly supporting or at least harboring the extremists. These suspicions are also behind American drone attacks on terrorist positions in western Pakistan, which often kill civilians in addition to the intended targets, thereby putting even more strain on the already fragile relationship between Pakistan and the United States.

In an internal document written a few years ago Bruce Riedel, a former CIA agent and advisor to several US presidents, referred to Pakistan as "the most dangerous country in the world." The magazine Newsweek then quoted Riedel in the title of a cover story. Riedel still stands by his assessment today. Pakistan, he writes, is a country where "every nightmare of the 21st century -- terrorism, nuclear proliferation, the danger of nuclear war, dictatorship, poverty and drugs -- come together in one place." In addition, Riedel points out, the country is critical to the survival and development of the al-Qaida terrorist network, as the strike against bin Laden demonstrates yet again.

The former CIA official's assessment is a pessimistic one. All the same, the overall situation is more complicated. In the 1980s, Pakistan, with American and Saudi help, supported the mujahedeen resistance fighters against the Soviet occupiers in Afghanistan. Even the democratic Pakistani governments under former Prime Ministers Benazir Bhutto and Nawaz Sharif, who were not suspected of being Islamists, funded the mujahedeen, in the hope that their victory would lead to a pro-Pakistan regime in Afghanistan.

'Nothing but Barracks and Weapons Everywhere'

But parts of the mujahedeen developed into the Taliban movement, which had turned against Islamabad by the time Pakistan joined the anti-terror coalition after Sept. 11, 2001. A similar situation applies to Lashkar-e-Taiba, a group that the Pakistani government once supported when its goal was to liberate Kashmir. But the terrorist strategy failed, and the government also lost control over that organization.

For years, enormous economic hardship in the country has contributed to a rise in terrorism in Pakistan. A large share of the population of about 180 million lives in bitter poverty. A horrendous inflation rate of 13 percent creates an additional burden for Pakistanis, some of whom can no longer afford basic foodstuffs like rice and flour and must resort to begging to survive. There is no government social welfare system.

Instead of providing welfare, the government spends massive sums on the military, which is consumed by an ideology shaped by fear of Pakistan's archenemy and more powerful neighbor India, a fear that is as real as it is incomprehensible to Western observers. Military officers are fond of showing graphs outlining all the Indian weapons stationed along the border. "Look," says a general in Islamabad, "nothing but barracks and weapons everywhere. The Indians can say a thousand times that they have no bad intentions. But intentions can change overnight. India is far more ruthless than many believe. Not a single neighboring country has a good relationship with India."

The last few years have offered an ideal breeding ground for corruption -- and for extremists, who offer poor, uneducated people a more favorable outlook with their promises of salvation.

The Pakistanis' biggest concern at the moment is a Western withdrawal from Afghanistan. "The Western countries that are now complaining that we support militants have forgotten us long ago," says the general. "But we are condemned to keep on living here, with all these people the West has fought here in vain." 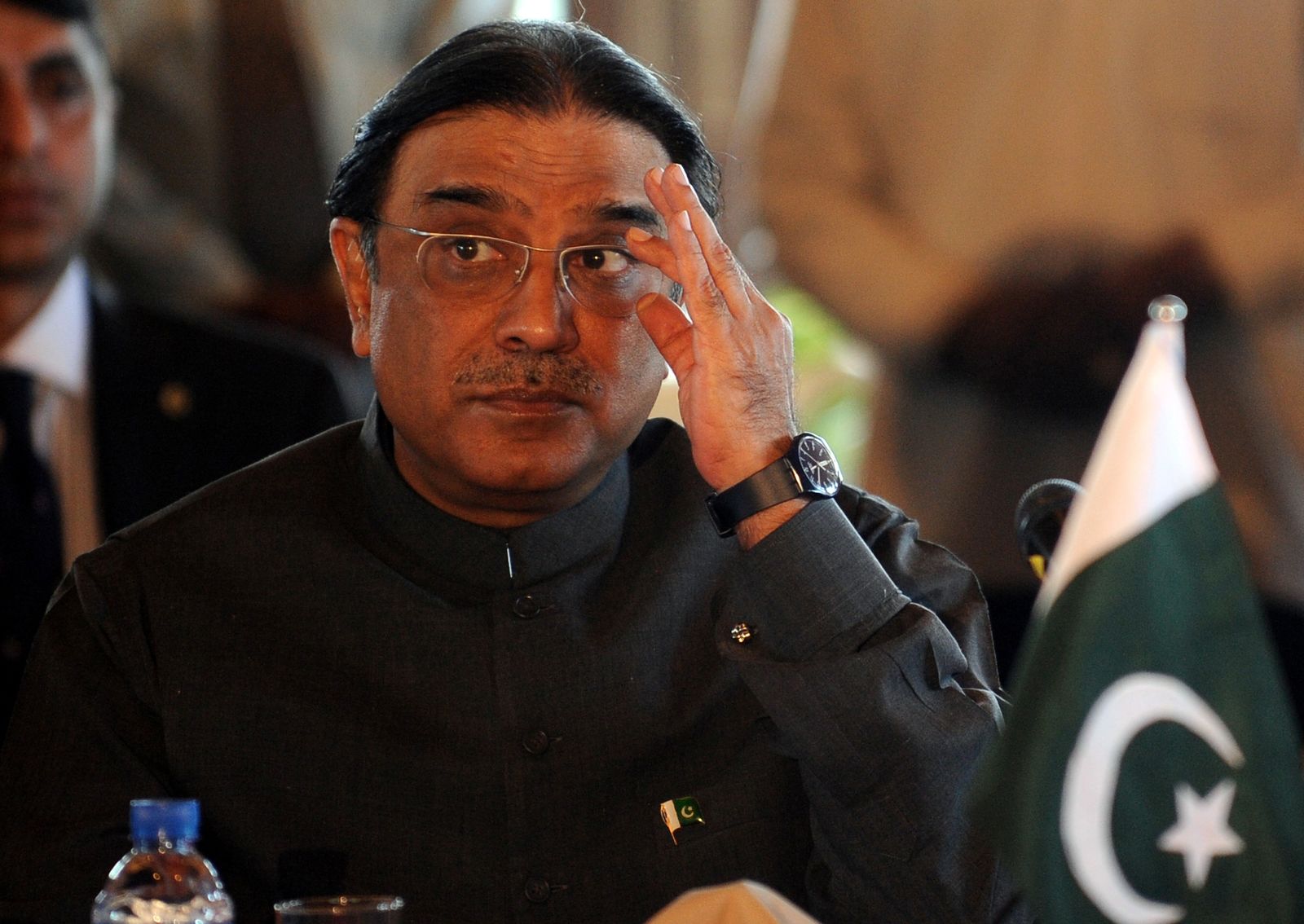 Pakistan President Asif Ali Zardari insists that his country is a valuable US ally in the fight against terror.