A mob in the marble halls of the Capitol. Brandished weapons on the besieged floors of the House and Senate. Representatives and Senators cowering under their desks donning gas masks.

The scenes from Washington are shocking. But they are anything but surprising. The attempted coup by the losers of the election is the grotesque, harrowing conclusion to a four-year-long, autocratic fever-dream held dear by none other than Donald Trump, the self-proclaimed law-and-order president, and aided and abetted by the increasingly radicalized Republican Party and right-wing radical propaganda media outlets.

These are scenes known from other countries – from "failed states" and repressive regimes. But not from the United States, which has for so long vaunted itself as the cradle of Western democracy and its foremost defender.

This is Trumpism, distilled to its purest form.

Trump and his toadies stoked the flames of a right-wing, white, male rage that has long been smoldering beneath America's surface, and they have channeled that rage and instrumentalized it for their own purposes. Like any wannabe dictator, Trump craves power and the adoration of his followers. Republicans crave money and right-wing judges. Their media outlets – from Fox News to OAN – crave ratings. Together, they are responsible for inciting Wednesday's marauding pack.

All of them must be held responsible.

Four years ago, many said naively: It'll be fine. They said: Trump will grow into the presidency, the corset of U.S. democracy will tame him. This country is strong enough to withstand him. They said: The office shapes the president, not vice versa. Those who doubted this were discounted as alarmists, fearmongers and killjoys.

But Trump remained who he had always been.

The man who extols his "genes" at every opportunity, who heaps praise on autocrats, who kept a collection of Hitler's speeches by his bedside, according to ex-wife Ivana – this man has always done exactly what he admires in others.

"He's now president for life," Trump said of Chinese President Xi Jinping. "Maybe we'll have to give that a shot someday."

For that, though, he needed cannon fodder to fight the battle for him. Ever since winning the election in 2016, he has been nourishing and cultivating them, flattering and inciting them with lies and fabrications. He encouraged the neo-Nazis of Charlottesville. He cheered on armed corona-truthers. He told the right-wing extremist Proud Boys to "stand back and stand by."

They only heard the second half of that sentence: Stand by. Which is exactly what Trump intended them to hear.

Their time came on Wednesday, the day that Congress was to formally, solemnly approve the results of the November presidential election. It is a routine event, anchored in the constitution – but Trump's lackeys turned it into a day of "insurrection," bordering on sedition, as President-elect Joe Biden stated plainly.

That insurrection formed on two fronts. One was the floor of the House of Representatives, where Trump vassals like Ted Cruz cynically announced their opposition to the certification of certain election results in order to suck up to Trump's base. It wasn't really an attempt to overturn the election results, they whispered behind closed doors, just a political stunt.

Confederate Flags in the Capitol

The second front in this insurrection ran along the other end of the National Mall, where Trump on Wednesday spoke to tens of thousands of his followers, again prattling on about unproven election fraud, drivel that has been lapped up by his apologists. "We will never give up, we will never concede," he crowed. "You'll never take back our country with weakness! You have to show strength!"

"Absolute banana republic crap," said Republican Representative Mike Gallagher, an Iraq veteran, in a video he tweeted as he was "sheltering in place" in his office.

The last time the U.S. Capitol experienced a comparable lockdown was on Sept. 11, 2001.

Warnings of precisely this kind of escalation had been circulating for several weeks. Plans were being hatched on networks like Parler and Telegram. And yet, the hallowed halls of U.S. democracy were at the mercy of these right-wing hordes. Where was federal law enforcement? Where was the National Guard?

It was a radically different situation than in the summer, when soliders and security forces brutally attacked Black Lives Matter protesters outside the White House gates, using smoke grenades, pepper spray and teargas on Lafayette Square to clear the way for Trump, just so he could be photographed holding up a Bible in front of a church.

Wednesday's insurrection was an eruption of white supremacy, despite shifting demographics and Democratic election victories, such as this week in Georgia. If the rioters had been African Americans, they would never have gotten so close to the Capitol. They would have been tear-gassed, beaten and arrested. Just on Tuesday, Trump had tried once again to depict the "antifa terrorists" as the true danger, warning them in a tweet to "keep away from Washington."

When, in the summer of 2018, dozens of women protested against the Supreme Court nomination of Brett Kavanaugh with peaceful sit-ins, they were immediately handcuffed. When Jane Fonda demonstrated against the Trump administration's climate policies in the building, she was led away by police.

But on this historic Wednesday, this day of shame for U.S. democracy, the country's senior-most white man stood by and did nothing for several hours as he watched the real-life consequences of his reality show. Only to then tweet out a half-hearted appeal ("No violence!") and a video from the Rose Garden – in which he repeated his most egregious lie: "We had an election that was stolen from us."

Later, he went on to sanction the insurrection. "These are the things and events that happen when a sacred landslide election victory is so unceremoniously & viciously stripped away from great patriots who have been badly & unfairly treated for so long," he tweeted. "Go home with love & in peace. Remember this day forever!"

An earlier version said that Trump once had Hitler's "Mein Kampf" by his bedside. It was actually a collection of Hitler's speeches. We have corrected the error. 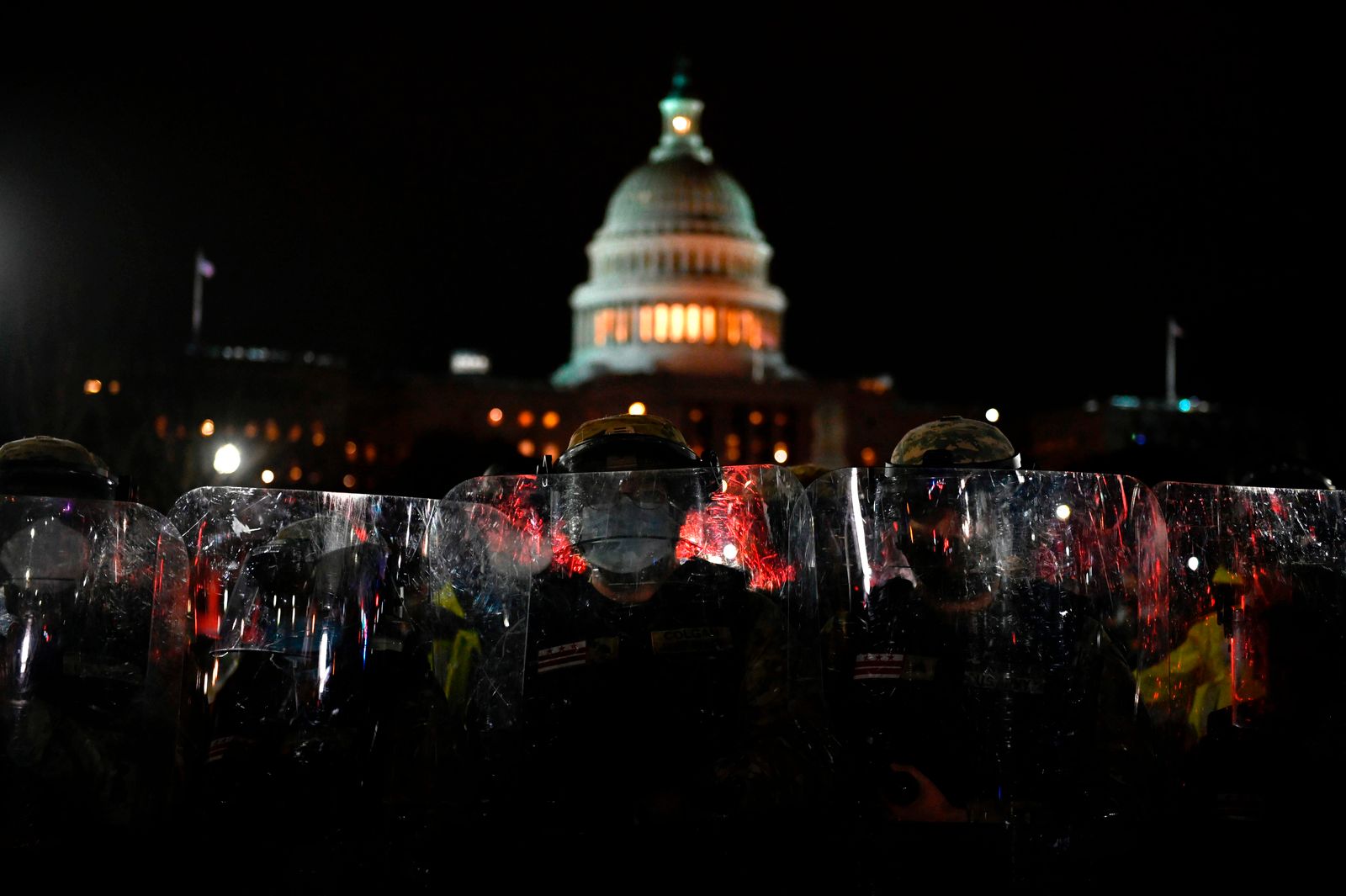 The National Guard in front of the U.S. Capitol 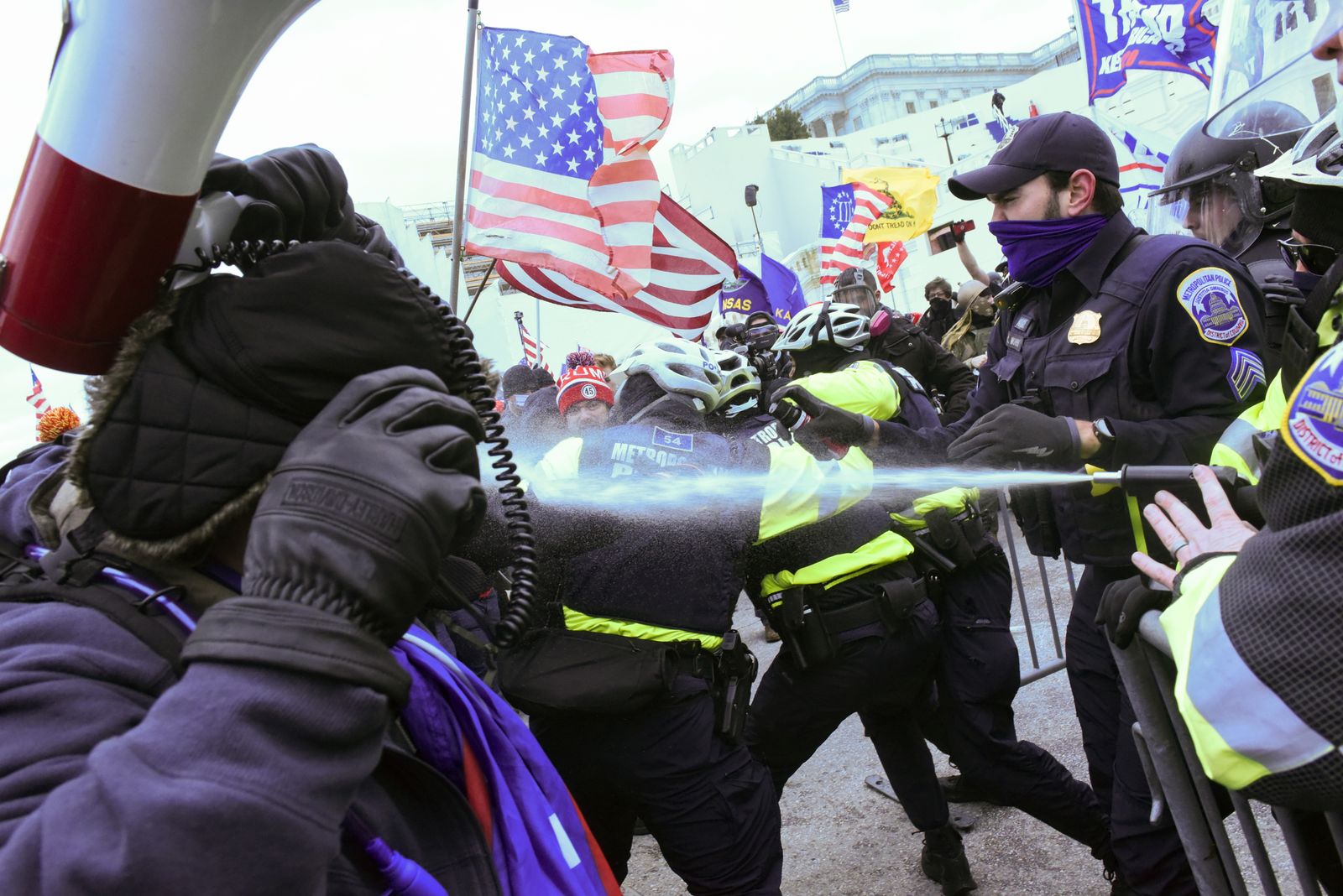 The Capitol Police were quickly overwhelmed by the mob. 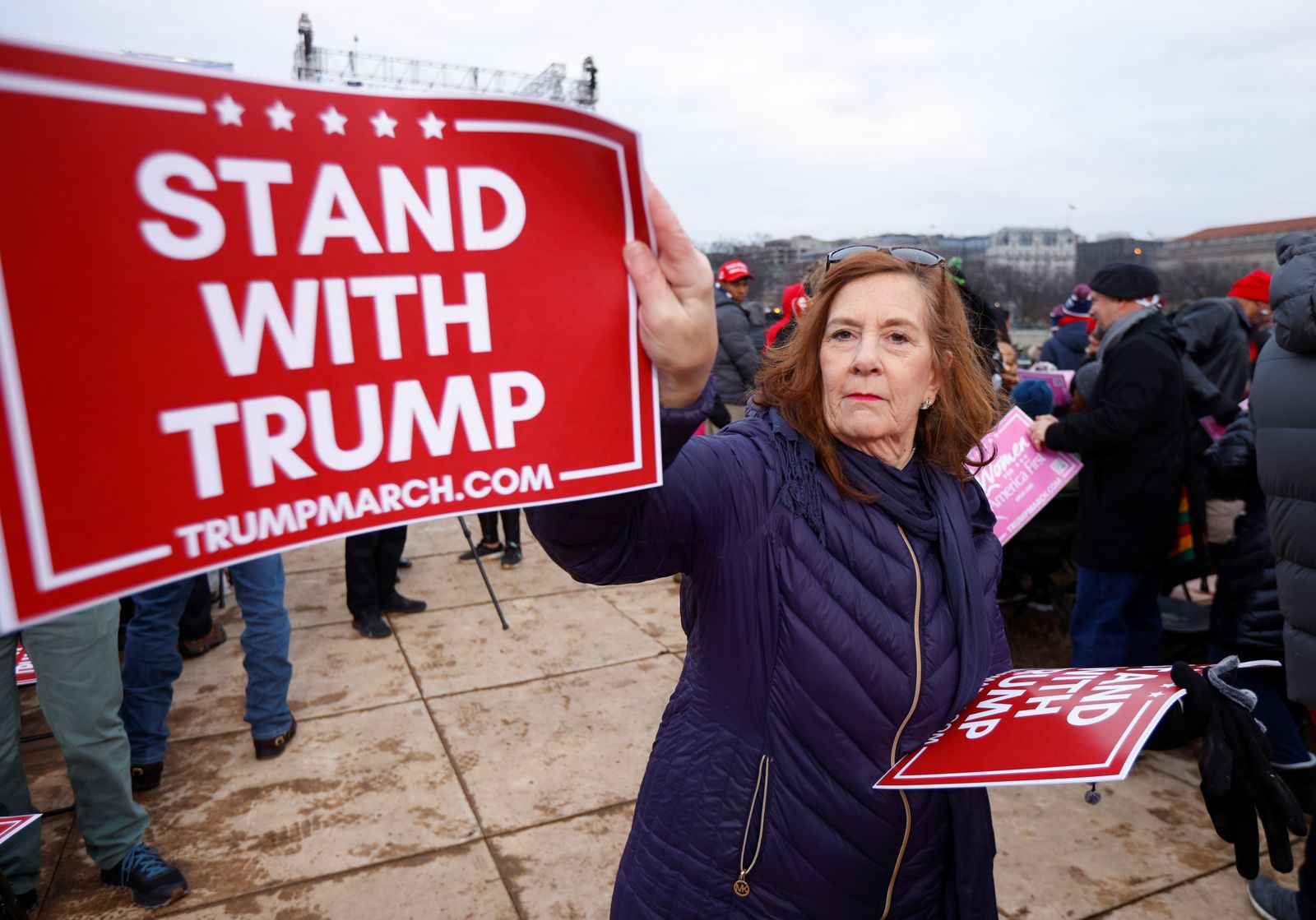 A Trump supporter at the president's rally, in which he told supporters: "You'll never take back our country with weakness!" 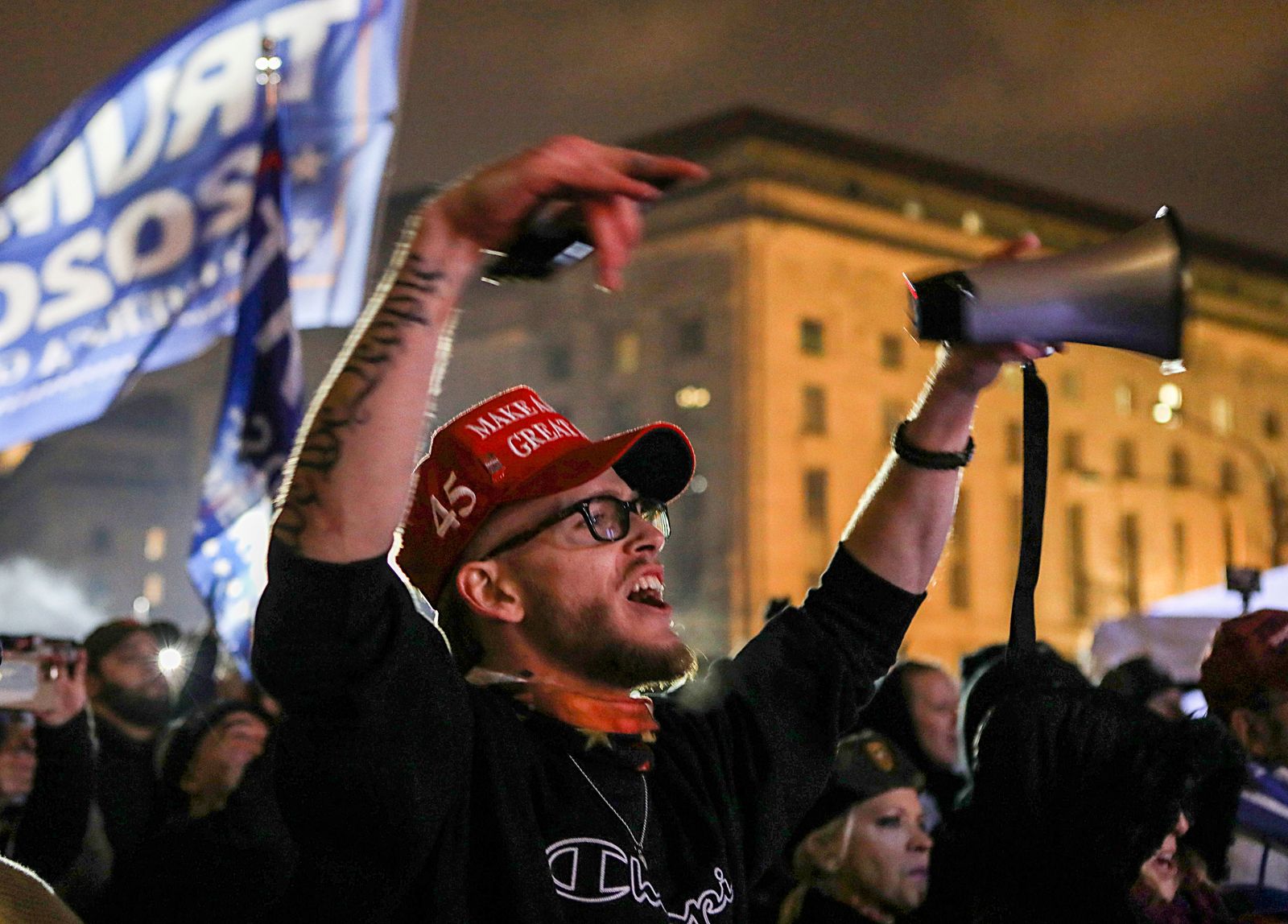 A logical conclusion to a four-year-long, autocratic fever-dream.