When it comes to cursing, the man doesn't hold back. "Son of a bitch" is the mildest cuss word that comes out of the militia member's mouth as he rants furiously about the inferno created by the hours-long American airstrike southeast of the city of Deir ez-Zor. Even as smoke continues to billow from burned out SUVs around them, he and five other men have come to remove the shattered body of one of their fellow fighters from the glowing embers of a bombed-out building.

The scene comes from a two-minute video of the battlefield that one of the fighters took on the afternoon of Feb. 8, hours after the firestorm, and provided to DER SPIEGEL and the Euphrates Post, a news site providing coverage of the region. It's the first photographic documentation of one of the most mysterious battles yet in this increasingly complex war.

Initially, the United States military announced on Feb. 8 it had attacked "pro-regime forces" of Bashar Assad's southeast of the city Deir ez-Zor to ward off an attack on a base belonging to the Kurdish-led Syrian Democratic Forces (SDF), who are allies of the Americans. The U.S. said the pro-Assad forces had attacked the SDF base with tanks and mortars. The U.S. fired back in response, claiming to have killed "more than 100" of the fighters in what was described as an act of self-defense.

The following video scenes from the site after the U.S. airstrike on Deir ez-Zor:

But who exactly were these attackers? And what really happened that night in the small, half-deserted villages on the east bank of the Euphrates River? Did American bombs decimate Russian troops? Could the attack even be a foreboding of coming skirmishes between the Americans and Russians?

A team of DER SPIEGEL journalists spent two weeks interviewing both witnesses to, and participants in, the battle. The team also spoke to a staff member at the only hospital in Deir ez-Zor as well as an employee of the local military airport in an attempt to get a clear picture of exactly what took place during the three-day battle.

The accounts largely corroborate each other and the image of events that emerges is one that contradicts what has been reported in the Russian and international media.

At 5 a.m. on Feb. 7, around 250 fighters south of Deir ez-Zor attempted to cross from the west bank of the Euphrates to the east using a military pontoon bridge. They included members of the militias of two tribes, the Bekara and the Albo Hamad, who are fighting for Assad's regime with Iranian backing, soldiers of the 4th Division as well as Afghan and Iraqi fighters with the Fatimiyoun and Zainabiyoun brigades, which are under Iranian command. A soldier with the 4th Division recounted that the units had spent a week gathering on the property of the military airport. Witnesses say that no Russian mercenaries took part in the attempted crossing.

The Americans and the Russians agreed last year to make the Euphrates River a "deconfliction" line. Assad's troops and its allies are west of the river while the east side is controlled by SDF under the protection of the Americans. The east side is home to a chain of productive natural gas fields generally known as the Conoco field.

As such, the Americans on the eastern banks viewed the advance as an attack and fired a series of warning shots toward to bridge. Nobody was injured and the attackers withdrew.

But they didn't give up. Long after darkness, around twice as many men from the same groups crossed another makeshift bridge a few kilometers north, close to the Deir ez-Zor military airport. They drove without their lights on to prevent U.S. drones from spotting them. Undetected this time, they made it to the village of Marrat on the eastern side. When they advanced further south at around 10 p.m., toward the SDF base in Khusham, the Americans, whose special forces were also stationed there, once again opened fire. And this time they weren't warning shots. The U.S. said in a statement given to CNN that after "20 to 30 artillery and tank rounds landed within 500 meters" of the SDF headquarters, the coalition forces "targeted the aggressors with a combination of air and artillery strikes."

That was putting it mildly. Because right around the same time late that night, another group of Syrian tribal militia members and Shiite fighters came from the village of Tabiya to the south and also attacked the SDF base. And the Americans struck back with their entire destructive arsenal. They deployed rocket-equipped drones, combat helicopters, heavy AC 130 aircraft, nicknamed "gun boats," to fire on targets on the ground, rockets and ground artillery.

They struck in the night, followed by an attack the next morning on a group with a tribal militia in Tabiya that had only come to retrieve the bodies. And on Feb. 9, they once again attacked a unit of the same fighters who had popped up on the eastern side of the river.

A Different Version of Events

It was primarily the second night-time attack from the village of Tabiya that triggered the American paroxysm, said two men belonging to the al-Baqir militia of the Bekara tribe. Because in addition to the deconfliction line, there was also a second agreement which allowed up to 400 pro-Assad fighters, who remained on the east side of the Euphrates following the 2017 battle against Islamic State, to remain. At least as long as their weren't more than 400 of them and they remained peaceful. But exactly that was no longer the case.

Among those stationed in Tabiya was a small contingent of Russian mercenaries. But the two militia sources said they did not participate in the fighting. Still, they said, 10 to 20 of them did in fact lose their lives. They said a total of more than 200 of the attackers died, including around 80 Syrian soldiers with the 4th Division, around 100 Iraqis and Afghans and around 70 tribal fighters, mostly with the al-Baqir militia.

It all happened at night, and the situation became extremely complicated when the fighters from Tabiya entered the fray. A staffer at the only major hospital in Deir ez-Zor would later say that around a dozen Russian bodies were delivered. An employee at the airport, meanwhile, later witnessed the delivery of the bodies in two Toyota pickup trucks to a waiting Russian transport aircraft that then flew to Qamishli, an airport near the Syrian border in the north.

In the days that followed, the identities of the Russians killed would be revealed -- first of six and ultimately nine. Eight had been verified by the Conflict Intelligence Team, a Russian investigative platform, and another was released by the radio station Echo Moscow. All were employees of the private mercenary company Evro Polis, which is often referred to by the nom du guerre of its head: "Wagner."

At the same time, however, a completely different version of events has gained traction -- disseminated at first by Russian nationalists like Igor "Strelkov" Girkin, and then by others associated with the Wagner unit. According to those accounts, many more Russians had been killed in the battle -- 100, 200, 300 or as many as 600. An entire unit, it was said, had been wiped out and the Kremlin wanted to cover it up. Recordings of alleged fighters even popped up apparently confirming these horrendous losses.

It was a version that sounded so plausible that even Western news agencies like Reuters and Bloomberg picked it up. The fact that the government in Moscow at first didn't want to confirm any deaths and then spoke of five "Russian citizens" killed and later, nebulously, of "dozens of injured," some of whom had died, only seemed to make the version of events seem more credible. It has generally been the case, after all, that when something in the Syrian war is denied by the Kremlin, or when the Russians admit to it bit by bit, then it is probably accurate. Besides, Russian losses in Syria are constantly played down.

Relations between the Russian mercenaries in Syria -- it is thought there are more than 2,000 of them -- and the government in Moscow have been tense for some time. The fighters claim they are being used as cannon fodder, are being kept quiet and are poorly paid. For them to now accuse the Kremlin of trying to cover up the fact that Russians were killed -- by the Americans, of all people -- hits President Vladimir Putin's government in a weak spot: its credibility.

The only verifiable sources for the decimation of hundreds of Russians are the photos and videos circulating on the internet or from Russian sources that are passed on to Western journalists. Some of them show footage from eastern Ukraine that was later doctored or even the demo version of a video game that Putin personally showed to Hollywood director Oliver Stone as alleged proof of a Russian attack on an IS convoy.

The situation on the ground between Khusham and Tabiya on the eastern bank of the Euphrates, described by a half dozen witnesses and people who were party to the events, does not confirm Russian mercenary participation in the attack or even that they joined the fighting at all. Ahmad Ramadan, the journalist who founded the Euphrates Post and has since emigrated to Turkey, comes from Tabiya. One of his contacts fights for the al-Baqir militia and took the video at the site of the bombings. "If it had been a Russian attack, with many Russian dead, we would have reported about it," he said. "But it wasn't. The Russians in Tabiya just had the bad luck of being in the wrong place at the wrong time." 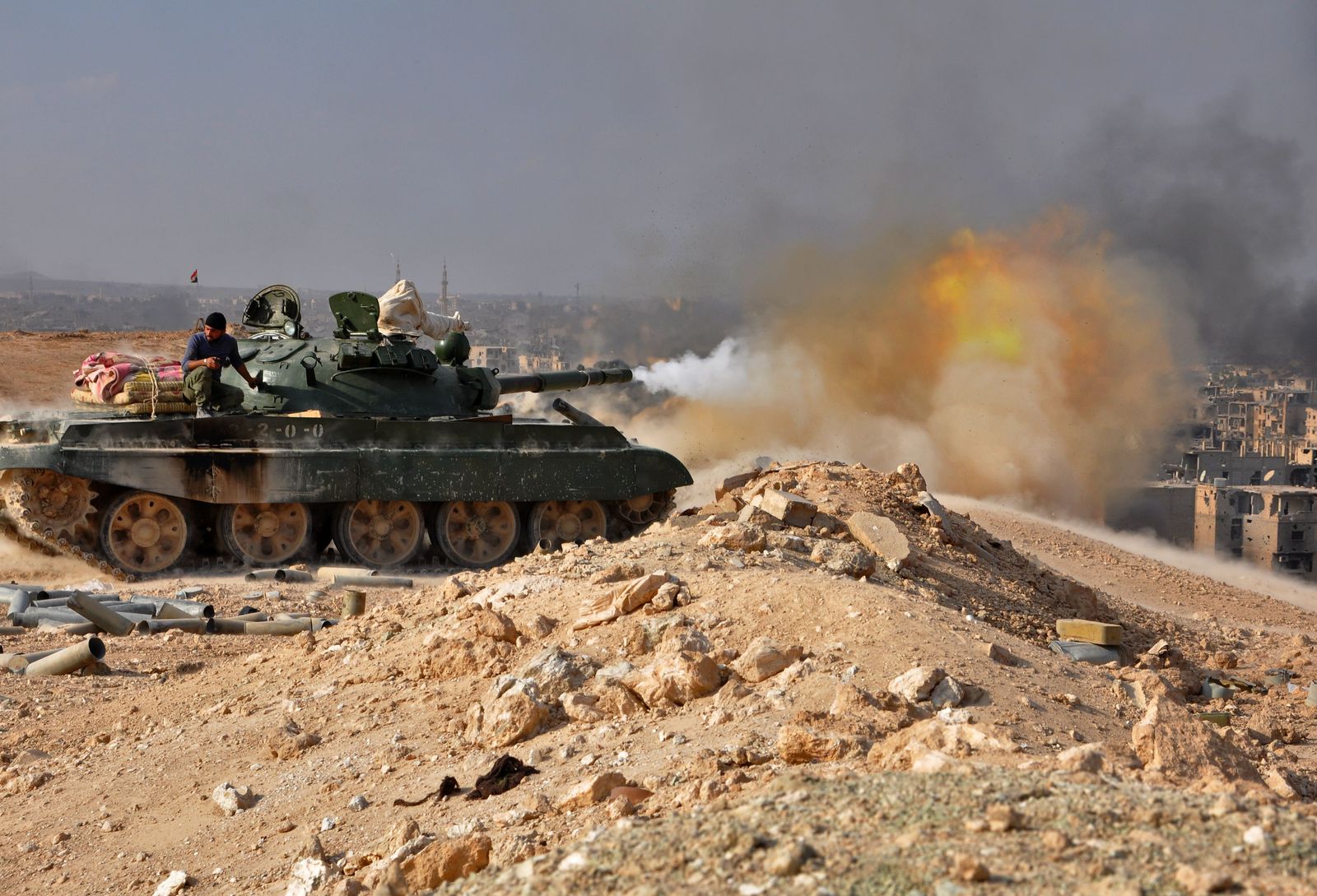