I only spoke to him once on the phone in person. "Come alone," he said, in an unexpectedly friendly voice. I asked if I could just bring along one fellow journalist, the Pakistani man who had put me in contact with him and who could translate from Pashto into Urdu.

Taking a deep, pensive breath, he responded, "Alright. But nobody else, please," before hanging up the phone.

A few days earlier, I'd heard that this senior Taliban commander was supposedly coming here, to Islamabad. He was reportedly arriving from the mountainous Waziristan region of western Pakistan to visit some influential people in the city and ask for their support.

I know a few members of the Taliban. In fact, as a journalist living in Pakistan, it's hard not to get to know a few spokesmen for the radical Islamists at some point or another. Without prompting, they will telephone you, explain the world, announce attacks, condemn the West and deny the claims of Western governments about attacks against their positions -- all in the hope that you will disseminate their points of view and, in the process, maybe even further their cause. Sometimes they just want to figure out the mood. But, whatever it is, you still have to talk to them. Why shouldn't the journalistic imperative of "listening to all sides" apply to them, too?

When I tried to contact upper levels of the Taliban about the reported visit, however, the spokesmen were markedly more tight-lipped than usual. So I asked my friend Iqbal, a Pakistani television reporter with good contacts to the Taliban, whether he knew anything about the visit and could help organize a meeting.

"Sure" Iqbal answered. "I'll call you as soon as I know more."

Two days later, Iqbal called and told me that the Taliban leader really was coming to town. In principle, the man was willing to meet with me, but he still wanted to figure out where to hold the meeting and to learn a bit more about me beforehand. For example, he wanted to know what I was hoping to discuss with him, what I planned to write and whether I was a Muslim.

"Tell him that I just want to have a conversation with him," I told Iqbal, "to find out more about the Taliban's plans. Where do they imagine things will go from here? And whether I write something depends on whether he has something interesting or new to say."

For a moment, I thought about how Iqbal should answer the religion question. My name is Muslim, but it reveals my Shiite background. The Taliban, on the other hand, are Sunnis and regard all Shiites as infidels. With a sheepish look, Iqbal told me that the Taliban commander wanted to speak to me directly and that he was only supposed to make the call and then hand me the phone. Then, he thought for a moment and added: "Say nothing about your religion when he asks you. He will recognize what you are." When the call finally happened, I kept silent about the matter, and the Talib didn't ask me about it.

On the day of the meeting, Iqbal picked me up in the afternoon in his little white car. The Taliban commander had picked a place to meet -- an upscale restaurant in the central part of the city.

By then, I'd already guessed what was going to happen next. Even so, I asked Iqbal if he had understood the instructions correctly. "You'll see," he answered.

Then, we made our way to the restaurant. Iqbal drove slowly because we were very early. He already had his mobile phone on his lap and was checking the rearview mirror frequently to see if we were being tailed.

Eventually, we parked the car, but Iqbal made no move to get out. "What are you waiting for?" I asked. "Let's go wait in the restaurant." His response: "Just wait and see."

Then his phone rang, emitting a horrible jingle from some Bollywood film.

I had been right in assuming that the Taliban commander would name a new place to meet. "So?" I asked Iqbal. "Where are we headed?" Looking at me, he replied: "To a mosque on the east side of town."

That was probably the wrong time to think back on a book I had read a few years ago, "A Mighty Heart: The Brave Life and Death of My Husband, Danny Pearl." Before being kidnapped and decapitated, the Wall Street Journal reporter had also been planning to meet an extremist and had also been redirected from his original meeting place. That was in 2002.

Why was I allowing myself to get drawn into this situation so carelessly, I asked myself. Shouldn't I at least send a text message to my wife to let her know where we were going? Still, I knew she would be worried to death, especially since she didn't know anything about the meeting in the first place. Our agreement stipulates that I won't tell her about any bad things unless I can do so with the benefit of hindsight. So, I decided not to send her a message and to try to dispel all thoughts of Daniel Pearl from my head.

'God Will Protect Us'

From behind the weather-beaten wall, you could hardly see the mosque, an old, run-down building of concrete. As we entered the prayer room, we took off our shoes. There was an old man kneeling with his back to us on a soft, green rug and praying. I wondered if that was the man we were supposed to meet, but when he was finished praying, he stood up, nodded to us and left. Eventually, we sat on the floor, and Iqbal started typing something into his phone.

"Nonsense. Don't you want to meet him?"

"Yes, but I though it was going to be different -- not here in the middle of nowhere."

Nervous? Do journalists get nervous, I thought. "Yeah, I am."

Iqbal laughed. "God will protect us."

I was starting to get a little irked at Iqbal. This wasn't the first time he had gotten me into an uncomfortable situation. Once, when he wanted to learn more about Christians in Pakistan, I had taken him to see a Catholic priest from Islamabad's Fatima Church. Then he went on to waste the whole visit on asking the priest whether he really didn't have sex and what celibacy was like. It was horribly embarrassing. Then, right in the middle of the conversation in the priest's house, Iqbal jumped up and said it was prayer time. He rolled out a prayer rug he had brought along and fell to his knees facing Mecca. The priest was visibly not happy about it.

A long hour passed. And then that Bollywood jingle blared out of Iqbal's phone again. "Got it. Got it. Yeah, we're on our way," Iqbal said into the phone. He then stood up with a moan and pulled me up by the hand since my legs had fallen asleep after sitting on the floor for so long. "C'mon," he said. "We're supposed to go to some gas station on the other side of town."

Once there, we had to wait again, though this time it was only for half an hour. The next call directed us to a park, and the one after that -- which came 30 minutes later -- sent us to a small, inconspicuous restaurant.

"He's afraid we're actually terrorist hunters," Iqbal told me. "In one or more of the places we waited, his people checked to see that we came alone and that we weren't unknowingly being followed by the police."

Well, I thought, at least we were scurrying about like characters in a bad thriller for a good reason.

We entered the restaurant, where we were the only customers. Thinking that it would surely be another while before we got the next call, I ordered some tea. I didn't feel like going anywhere else, and it was already getting dark outside. If he didn't show up at the restaurant, I decided to just blow off the whole thing.

'I'm Happy to See You, Brother'

After five minutes, a man in his early thirties with a long beard entered the restaurant. He was wearing a traditional brown Pashtun hat and an olive-green jacket. He peered around, gave us a penetrating look, nodded almost imperceptibly and disappeared. A minute later, he returned with another man in tow. This one was about 40-years-old, and he also had a long beard and a Pashtun hat. It was the Taliban commander.

"Waleikum salam," the older man answered. Iqbal stood up and hugged them both, and I had no choice but to follow his example. The men were apparently impressed by that. "I'm happy to see you, brother," said the Talib. He is really calling me brother, I thought.

His companion ordered tea and spelled out for me what the preconditions for the conversation would be: no names, no exact places and -- most definitely -- no photographs. Moreover, he also stipulated that the article could only be published five days later, after they had left Islamabad.

At the time, I wondered whether it was right to agree to such preconditions. But, then again, sometimes you don't really have a choice. What's more, you can even find politicians, business executives and pop stars in democratic countries whose stipulations are just as stringent.

Much Ado about Nothing

Though I expected his companion to frisk me, he didn't. They only asked us to move to another table so that they could keep an eye on the door. I wondered whether there were more of his comrades waiting outside. At the beginning of our conversation, the commander frequently looked toward the exit, obviously wary about gunmen storming into the place to arrest or shoot him without further ado. I, on the other had, was afraid that his men would enter and carry me off. It was a curious situation: two men who didn't trust each other sitting together, afraid of the other, with equally fearful companions, drinking tea in a restaurant neither would have visited on his own.

In any case, what followed was disappointing. The commander spouted off the usual stuff about waging "holy war," about how everything was the Americans' fault and about how you have to fight them "till the bitter end." So as to avoid the middleman, he switched from Pashto to a rather halting Urdu. All the while, Iqbal just sat next to him nodding his head as the commander went on and on. If the Americans would withdraw from Afghanistan, he said, things in Pakistan would get "much better." The Pakistani army was a "bunch of traitors," he said, who deserved to be punished. When I asked him if he would ever negotiate with the Americans, he said, "Never," though other commanders would disagree.

A half hour later, the Taliban commander's companion stood up, prompting the commander to stand up as well. "It was a pleasure to meet you," he said. Then he hugged us again before disappearing with a mumbled "Peace be upon you, brother." After speaking for a half an hour, he had said nothing. He hadn't responded to my questions, hadn't mentioned why he'd come to Islamabad. He'd merely rattled off a bunch of boilerplate Taliban ideas.

All that drama for this? All the driving from one place to another? All the preparation, the effort, the fear? For a half hour of self-important banter?

Iqbal and I quickly left the restaurant and drove to another one in the central part of the city. Even though he hadn't said anything, I was still glad that Iqbal had been at my side the entire time.

He was also visibly relieved that the whole thing was over. "Next time," he said with a smile, "we should re-visit that church with the funny priest." 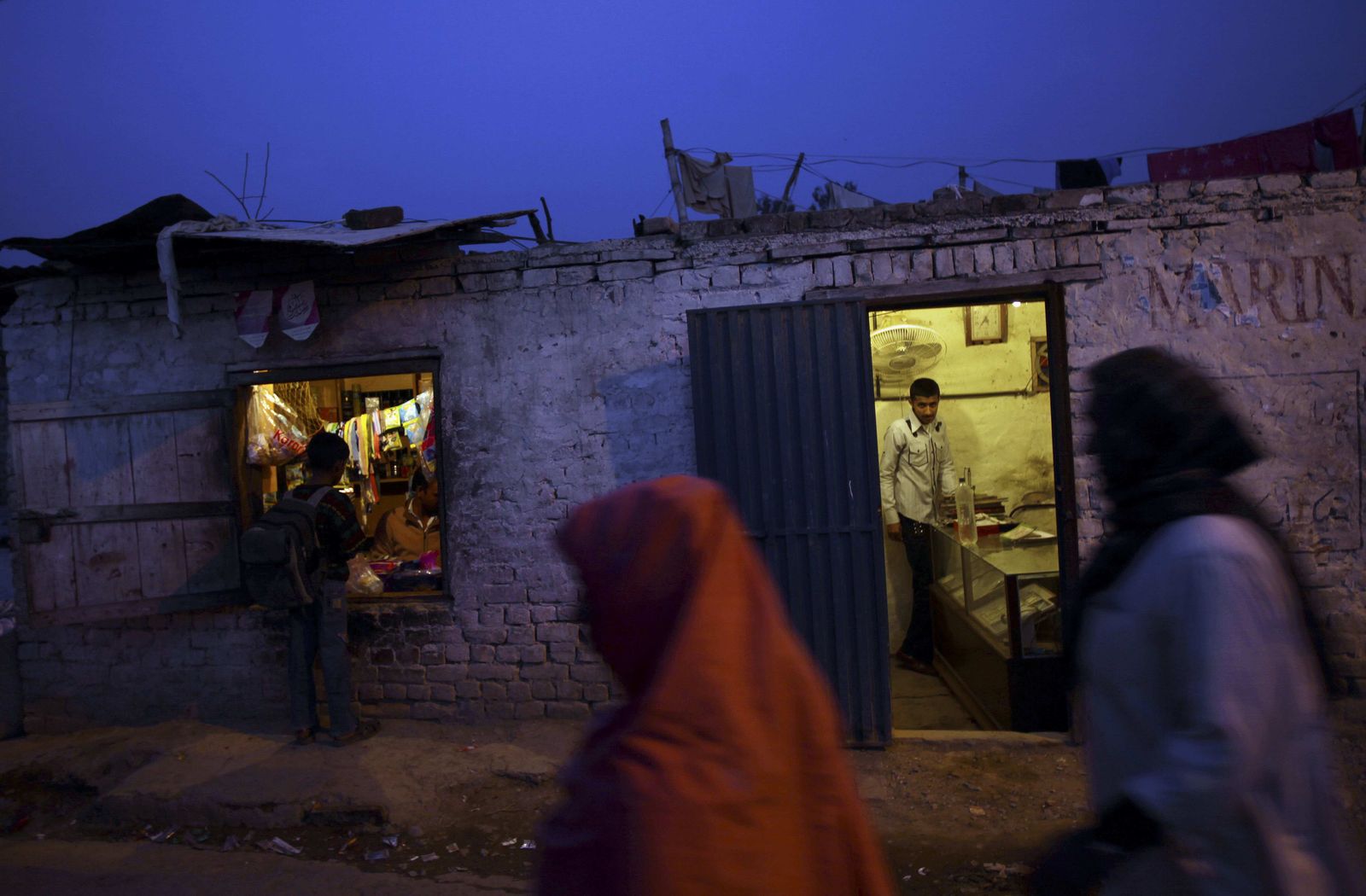 Pakistani women on an evening walk in Islamabad.