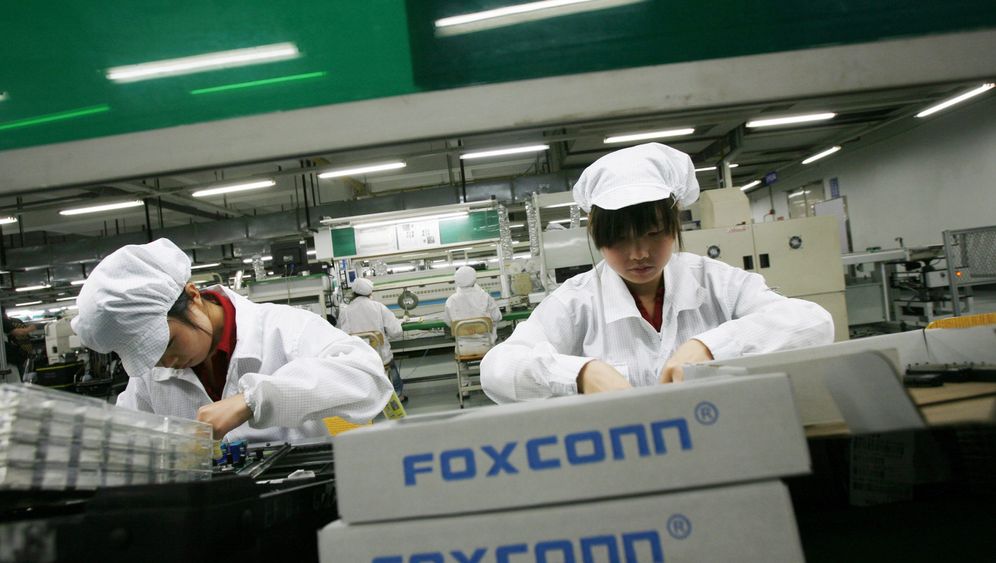 Photo Gallery: Inside the Foxconn Factories

They jog in orderly rows of twos through the industrial area. The young people, who look about 19 or 20, hope to be future builders of the iPad. Each of them holds a brown envelope in his or her left hand that contains their job application. At the foreman's command, they turn a corner onto the steps of the recruitment office.

They are here because of electronic component manufacturer Foxconn, which is hiring tens of thousands of employees. The company has built new factories in the Chinese city of Chengdu to produce millions of iPads for Apple. The supplier is known for the strict rules it imposes on its employees. Last year, that strict discipline may have helped lead to the suicide of 13 workers at a Foxconn facility in Shenzhen. At the time, observers spoke of terrible working conditions there.

SPIEGEL ONLINE paid a visit to the Chengdu plant to examine the question of whether the company is now treating its employees better.

"We are not allowed to talk while we are working," says 19-year-old Wang Cui, whose name was changed for this story. She has prominent eyes and dark skin, and wears a blue vest with the Foxconn logo over her white plastic jacket. Her long fingernails are well cared-for. She does not work on the production line, but instead performs quality control on iPad housings.

Is she bothered by the strict rules? "Work is work, the rest is the rest," says Wang, shrugging her shoulders.

Then she does talk, despite the ban. She says she fears the foremen. "The supervisors do not respect the workers," she says, adding that her colleagues have been punished even for small mistakes. The supervisors forced them to stand between the production lines for all to see -- almost as if they were in the pillory.

Foxconn concedes the possibly that there might have been misconduct. "We do not support it, but cannot rule out that it can happen," the company said in a statement. "But we want to change that."

At lunchtime thousands of workers stream out of the factory and into the area in front of the factory's gate. The food in the factory's cafeteria is not to their taste, so they buy noodles in plastic bowls and steamed vegetables from food stands mounted on bicycles and motorcycles. Trucks with heavy loads squeeze their way through the crowds on their way to the factory, honking their horns.

"I work from Monday to Saturday, 12 hours a day," says Zhang Feng, 20, who also works in quality control. He has combed his dyed-brown hair diagonally across his face, following a Japanese fashion. Two obligatory overtime hours are included in each work day, and Saturdays also count as overtime. "That makes almost 20 overtime hours per week," says Zhang, "and a total of 80 a month."

These working hours are standard at Foxconn in Chengdu, but Chinese labor laws only allow 36 overtime hours a month. "The overtime at Foxconn often exceeds the legal limit by more than 100 percent," says Chan Sze Wan of the Hong Kong-based workers' rights non-profit Sacom. Together with the campaign "Make IT Fair," which is being supported by the European Union, Chan regularly investigates the working conditions at Foxconn.

The company says it is pursuing the goal of limiting overtime to 36 hours per month. Along those lines, it is working in conjunction with local authorities to build more dormitories and factories. "In addition, we are working on making the basic wage high and ensuring that employees do not have to work overtime just to cover their basic needs," says a spokesperson.

City within a City

The construction of factories in Chengdu only began last year, but 100,000 people are already working there. Few outsiders have visited the plants in that time.

Foxconn, which is based in Taiwan, has its main factory in mainland China in Shenzhen, which is 1,500 kilometers south of Chengdu, near Hong Kong. Here, everything looks orderly. About 400,000 people work here in a factory complex that is several square kilometers in size -- a city within a city. In the past, outsiders were not able to visit the campus, but the company now allows visitors to this facility in a bid to improve its image following the series of suicides in 2010.

Dozens of production lines stand next to each other in the brightly-lit factory buildings, which are hundreds of meters long. The shiny floors are painted gray. Everything is extremely clean, almost sterile. The workers who put together the iPhones, MacBooks and other products wear anti-static jackets. Visitors have to wear caps and put covers on their shoes, so they don't bring in any dirt.

Some of the production steps are fully automated. But many employees have to repeat the same monotonous hand movements thousands of times a day. Talking is not allowed unless it is absolutely necessary, and workers have to ask their supervisors for permission to use the restroom.

The main street that leads, past barriers and control points, from the factory gate to the interior of the extensive grounds is lined with palm trees and flower beds. There are banks, stores, libraries, swimming pools and cafés where one can get a good cup of espresso.

Only the safety nets attached to the facades of the taller buildings do not fit so well with the image of a civilized industrial compound. They were installed a year ago to prevent future distraught employees from jumping to their deaths. At the same time, the company opened a "care center" in which advisers are available around the clock to help employees with their personal and work problems.

"We were not a very open company before," says Foxconn manager Louis Woo. "But now we are listening more to our employees in order to learn what they expect from life." A distinguished-looking 63-year-old, he is wearing a shirt with suspenders and has shed his jacket on account of the heat.

He says he knows that Chinese labor law only allows for 36 hours of overtime a month, but explains that a lack of infrastructure makes it hard to adhere to the guidelines. "That should not be an excuse," Woo says. "We don't want to break the rules. In order to abide by them, we are building more factories and more dormitories for the workers, and we are hiring more people."

In other words, the demand from Apple, Nokia, Sony and other big-name companies is so high that Foxconn is simply letting its workers work over the legal limits.

In theory, this business practice violates the code of conduct that Apple requires of its producers. Their policy dictates that working hours should not exceed legal limits under any circumstances.

But when contacted by SPIEGEL ONLINE, Apple spokesman Alan Hely did not address the issue of overtime. Instead, he merely pointed out the improvements that Foxconn has undertaken since 2010. 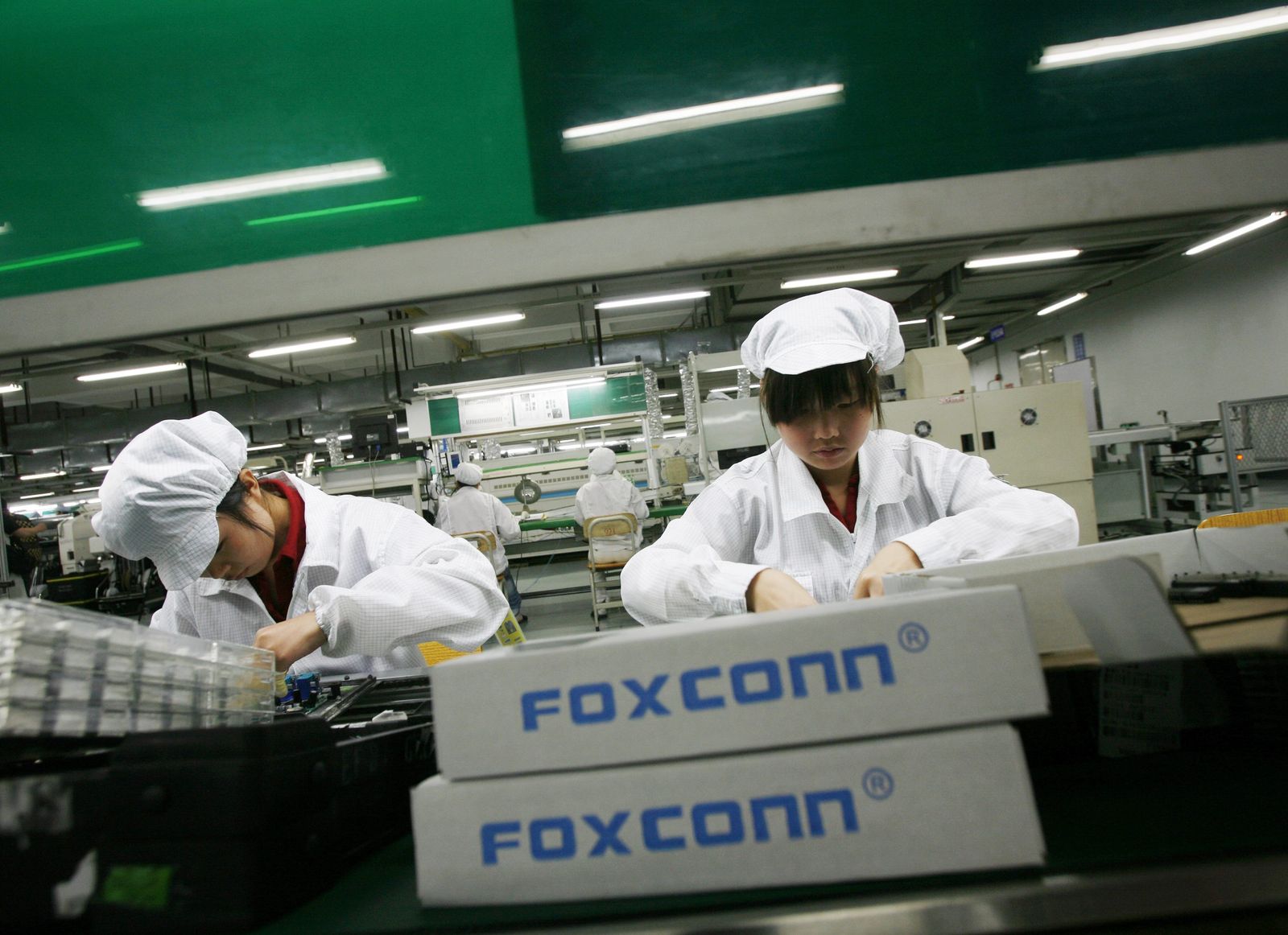 A May 2010 file photo shows employees at a Foxconn factory in the southern Chinese province of Guangdong. Workers say they are not allowed to speak to each other unless absolutely necessary and need to ask for permission to use the restroom. 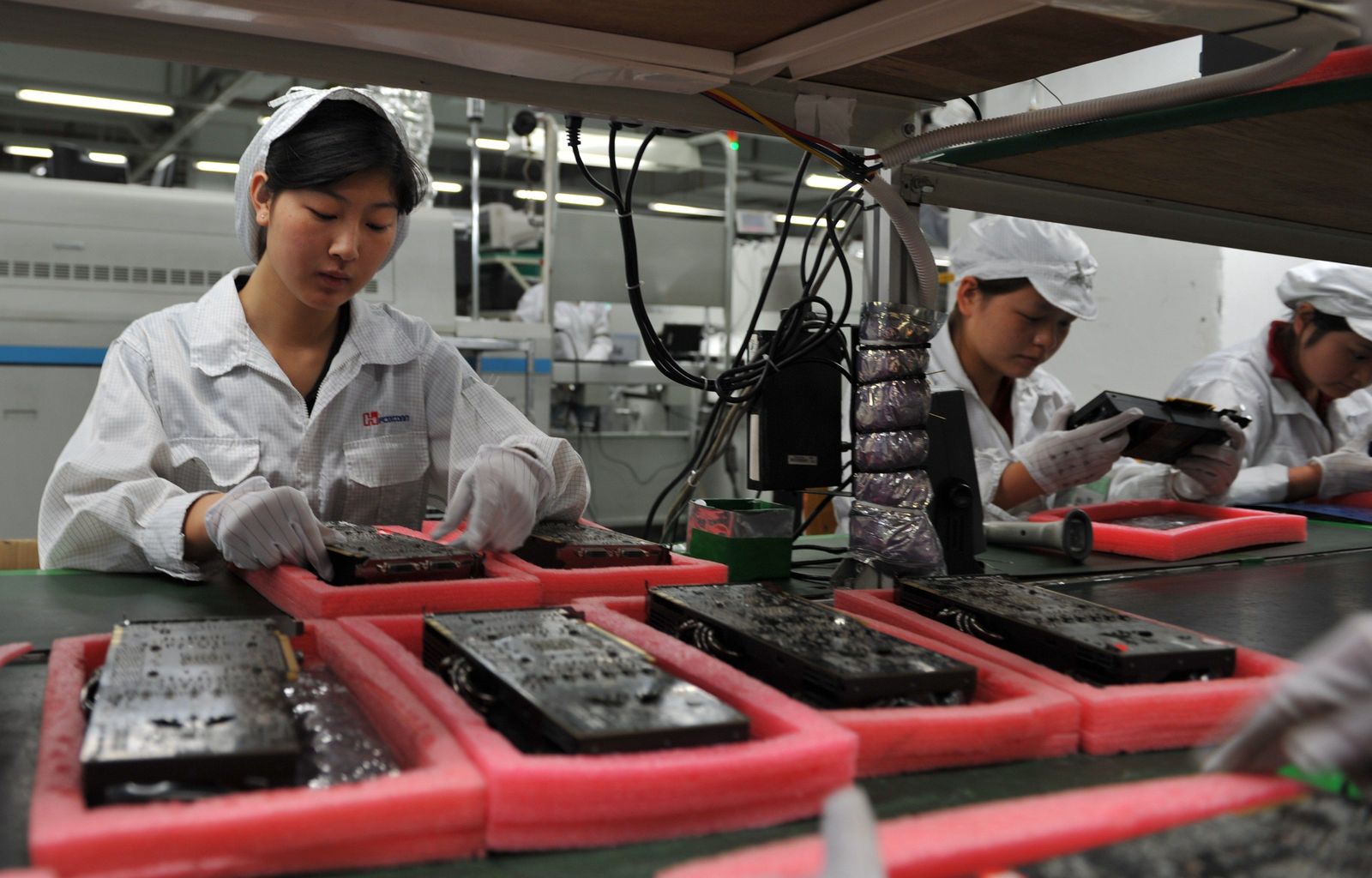 Workers on the production lines may repeat the same movements thousands of times a day. Some employees of a Foxconn factory in Chengdu say they work 80 hours of overtime a month -- more than double the legal Chinese limit. 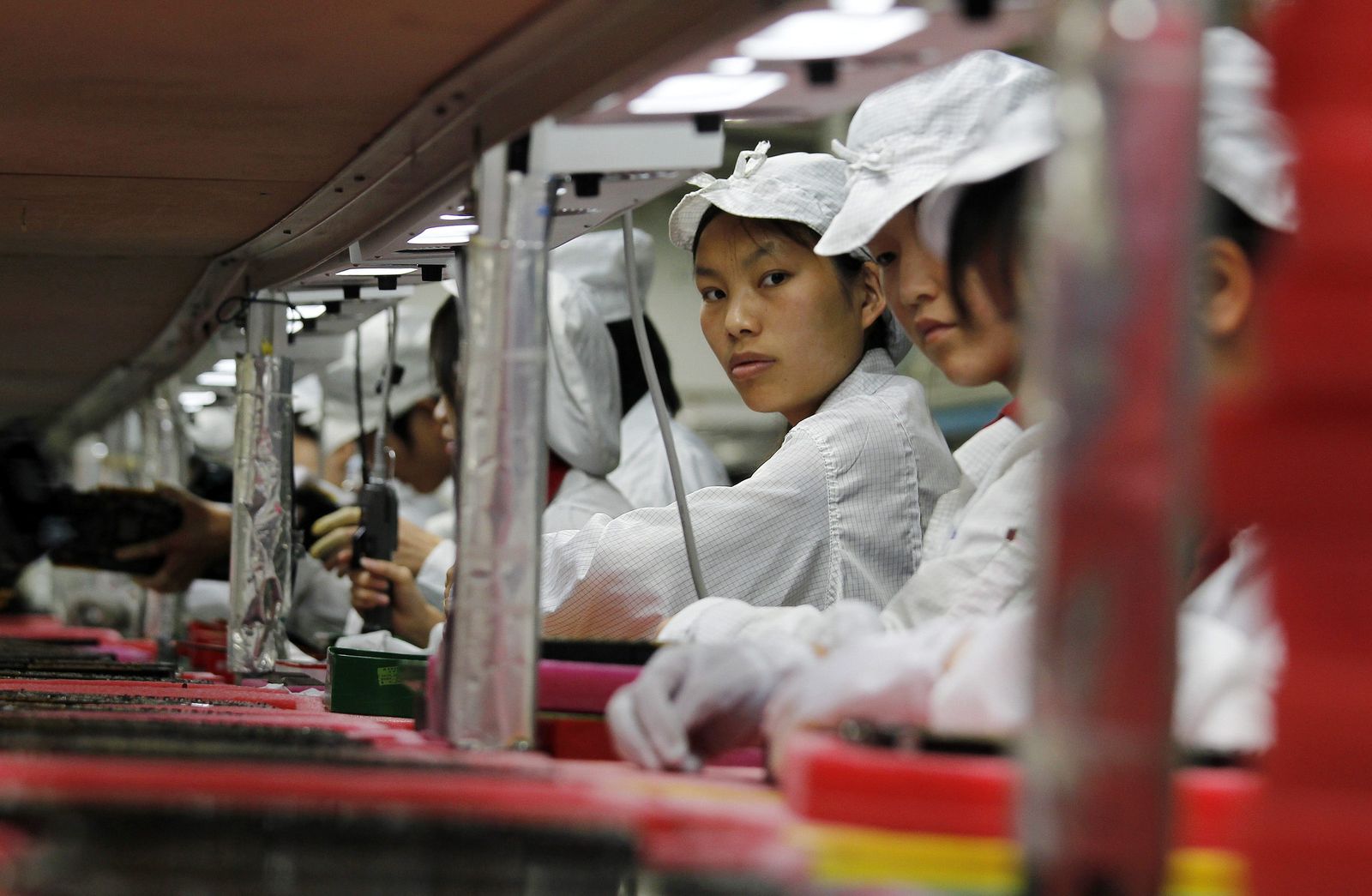 Workers on the production line. "Order and obedience rule here," one woman who works in quality control says.