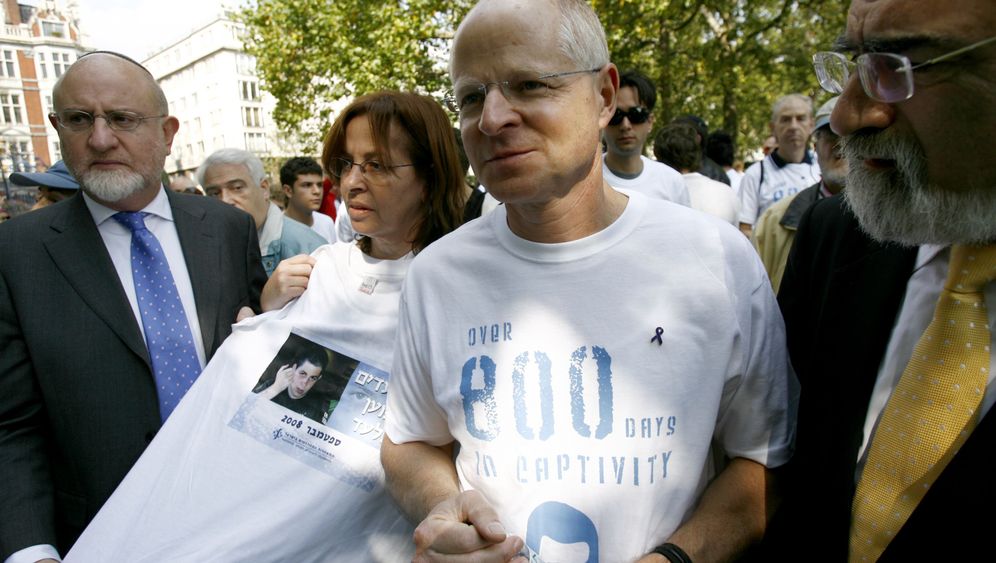 Noam Shalit is sitting on a white plastic chair in a tent in Jerusalem, looking not unlike a Swedish tourist with his straw-blonde hair. He is wearing rimless glasses, jeans and a fleece sweater. "Unfortunately, I'm not very optimistic," he says.

Shalit is referring to his son Gilad, 24, probably the best-known prisoner in the Middle East and something of a national hero in Israel. Almost five years ago, on a Sunday in June 2006, a Hamas commando attacked an Israeli army post, kidnapped Shalit and took him hostage. He is likely being hidden somewhere in the Gaza Strip by the Palestinian group Hamas.

For more than one-and-a-half years, an envoy of German Chancellor Angela Merkel has been mediating between Hamas and the Israeli government. His name is Gerhard C., and he is a senior official at the German Federal Intelligence Service, the BND. Noam Shalit respects the German envoy and has confidence in him, more confidence, in fact, than in his own government.

Shalit points to a white plastic chair in the tent. A note on the chair reads: "Reserved for Gilad Shalit." The tent stands in the middle of Jerusalem, in front of the residence of Prime Minister Benjamin Netanyahu, where Shalit has been camping out since July 8. The tent has become a magnet for Israelis and tourists, a sort of temporary memorial. The father says that he will not leave until his son has been returned to him. Blinking over the edge of his glasses, he says: "The German intermediary is very professional. He is trying everything."

But everything is often not enough in the Middle East, as recently became clear yet again. A few days ago, hardliners within Hamas rejected the BND's most recent offer. Mousa Abu Marzook, deputy head of the Hamas leadership in exile, publicly accused Gerhard C. of siding with Netanyahu and adopting his view. For this reason, Marzook said, Hamas would no longer accept him as an intermediary. It would seem that the intermediary from Berlin may have failed, at least for the time being. It is a serious setback -- for Shalit, for the region and, not least, for the BND, whose strong reputation in the Middle East is partly based on its successful mediation between the sworn enemies.

It isn't the first time the negotiations have seemed deadlocked. In December 2009, after months of shuttle diplomacy between the Israeli government in Jerusalem and Hamas leadership in the Gaza Strip, Gerhard C. presented the two sides with an agreement that provided for the exchange of Shalit for 1,000 Palestinian prisoners in Israeli jails. But Netanyahu put an end to the deal. In a heated session of the Israeli security cabinet, which includes the prime minister and the six most important cabinet ministers, three voted against the Berlin proposal and three voted for it. Netanyahu had the tie-breaking vote, and he turned down the proposal. Instead, he presented a significantly scaled-down offer that included a list of prisoners to be released. But the list did not contain any of the senior militants whose release Hamas was demanding.

Close associates say that Netanyahu, anxious not to hand Hamas a propaganda coup, was afraid to pay too high a price for Shalit. He was afraid of images of murderers and terrorists being welcomed home by a Palestinian crowd and, confident of victory, firing their Kalashnikovs into the sky.

The Israelis hoped that moderate voices within the Hamas leadership would prevail. The head of the political arm of Hamas in the Gaza Strip, Mahmoud al-Zahar, had been seen as a proponent of a deal. It was thought that Zahar, a doctor by training, would even have signed less attractive offers from Jerusalem. But after initial hesitation, the leader of the Hamas political wing, Ahmed Jabari, fought the deal tooth and nail. And as long as the Hamas leadership in the Gaza Strip was in disagreement, the leadership surrounding Khaled Mashaal in Damascus was unwilling to make a decision. Officially, Hamas never rejected the 2009 offer. Nevertheless, the mobile phone that Gerhard C. always keeps with him -- the one reserved for the negotiations in the Middle East -- stopped ringing.

'Who Knows What Will Be Next?'

To increase public pressure on Netanyahu, Noam Shalit and a group of friends began a march on Jerusalem. He took a leave of absence from his job and moved to the city. He tied a banner to a wall across the street from the official residence Netanyahu shares with his wife Sara. It reads: "Sara and Bibi, I have been alone in captivity for 1,731 days. And where are you?

It wasn't until the end of 2010 that the negotiations began making progress again. Early this year, Gerhard C. flew to Jerusalem and met with Netanyahu's chief negotiator, Hagai Hadas. Then he met with Zahar in the Gaza Strip and presented him with the new proposal. The Israelis offered to permit a number of Palestinians who were to be released into exile far away from the Palestinian Territories to return earlier than they had previously stipulated. The new proposal also included additional privileges for other prisoners in connection with the exchange. But to this day Netanyahu remains unwilling to compromise on the core of the agreement, the list of Palestinians to be released.

When he presented his new proposal, the BND official also delivered an ultimatum: The Hamas leadership had until the end of February to decide on the new offer. But the revolts in Tunisia, Egypt and Syria brought turmoil to the Shalit negotiations. A planned trip to Damascus by Zahar, in which the doctor was to discuss the new terms with Mashaal, failed to materialize because of the fall of the regime of then Egyptian President Hosni Mubarak, and a meeting of the Hamas leadership in Cairo had to be postponed several times.

The public rebuff by Hamas deputy leader Abu Marzook is a delayed response to the German envoy's proposal. The Hamas hardliners have apparently decided to keep Shalit as a bargaining chip in their war against Israel.

Noam Shalit knows that Hamas's recent personal attacks on the German envoy are not a good sign. Until now Gerhard C., who once worked for the BND in Damascus, was seen as an honest broker, respected by Hamas and Hezbollah.

It appears that it will take a while longer before Gilad Shalit can sit on the white plastic chair next to his father in the tent. Nevertheless, Noam Shalit remains hopeful. "Something unexpected is always happening in our region," says Shalit. "Who knows what will be next?"