SPIEGEL ONLINE: The European Union hasn't exactly excelled itself in its handling of Tunisia. The deposed president, Zine El Abidine Ben Ali, was fawned over for decades as the supposed guarantor of political stability, while the EU simply turned a blind eye to torture and repression. Do you regard Europe as being complicit?

Alvaro de Vasconcelos: I have to agree there. The European Union, and especially the member states geographically closest to Tunisia, accepted Ben Ali's regime for far too long. They saw the status quo as a safer option than experiments with democracy. The underlying reason for this is the Europeans' fear that Islamists could gain power. Many still consider authoritarian Arab regimes to be the lesser evil.

SPIEGEL ONLINE: Ben Ali used this fear very effectively to win support for his own dictatorship.

De Vasconcelos: The question is which Islamists we're talking about here. The largest Islamist movement in Tunisia, the Ennahda party, is comparatively moderate; it has nothing in common with extremist and jihadist groups at the other end of the spectrum. Political Islam is not a homogeneous bloc. There are significant ideological differences between, say, the Justice and Development Party (PJD) in Morocco, the AKP (Prime Minister Recep Tayyip Erdogan's Justice and Development Party) in Turkey and the Muslim Brotherhood in Egypt. Apart from that, Ben Ali did not only repress the religious opposition, he also did away with the secular opposition. He nipped any possible manifestations of democracy in the bud -- which actually tended to strengthen the extremists as a result.

De Vasconcelos: Well, the northern EU member states also cooperated with Ben Ali, even if the southern states certainly benefited more directly. When it comes to France, it seems to me the fundamental question is how a former colonial power should interact with its former colony. I'm Portuguese, and my country has very similar difficulties in finding a balanced relationship with its former colonies.

SPIEGEL ONLINE: But who should have used its ties to Tunisia to push for more reforms, if not France?

De Vasconcelos: Of course former colonial powers are always more present and influential. They're the ones who need to defend the EU's values on the frontlines. But on the other hand, this is not just about France. In fairness, we have to acknowledge that nearly all the EU's members discussed the "Tunisian model," with its mixture of authoritarian rule and halfway solid economic development, as a model for success. Even in Morocco, some people were starting to praise Ben Ali. But no one in Europe or North Africa can do this seriously anymore after the revolution in Tunisia. The Ben Ali model has failed permanently.

SPIEGEL ONLINE: Does that mean it's high time for the EU to concern itself with the observance of human rights on its own doorstep, and not only with setting up functioning market economies?

De Vasconcelos: We need both. It's wrong to focus only on economic cooperation and then to hope that a sufficiently stable system will become democratic more or less by itself. The EU needs to urge its neighbors to pursue both economic stability and political modernization in equal measures.

De Vasconcelos: No. The European Neighborhood Policy is at its core a highly effective tool for bringing the south and east closer to the EU. We have simply focused too narrowly on the economy. We also employ a double standard: We believe that democracy will bring stability to Belarus or Ukraine, while fearing that the same in North Africa would lead to chaos and terror. That's fairly humiliating for Tunisians.

SPIEGEL ONLINE: But we don't know yet how the Jasmine Revolution in Tunisia will turn out.

De Vasconcelos: There's a real chance for democracy here, but also the risk that the revolution could fail. The country is in turmoil, and much depends on Europe during this phase. The EU should consider Tunisia its highest strategic priority. If this democratic transformation succeeds, we will no longer be able to talk about the "Arab exception" -- we will see that democracy is possible in this part of the world too.

SPIEGEL ONLINE: Do you see this as the start of a domino effect in the region?

De Vasconcelos: It's too soon to say. In any case, Tunisia's neighbors now recognize that an extremely repressive police state with a liberal façade is not guaranteed to last either. The Jasmine Revolution serves more or less as a fatal blow to those who have flirted with the Ben Ali model.

De Vasconcelos: There's a great deal Europe can do. For example, we can help in setting up political parties, just as Germany helped after the toppling of the Salazar and Franco regimes in Portugal and Spain. We can also provide financial assistance. Tunisia is extremely dependent on economic conditions in Europe, which is why it also experienced shockwaves from the euro crisis. One possibility is emergency aid, to be increased depending on progress. Giving such aid might seem a hard sell given the current financial situation, but we shouldn't forget what is at stake here. 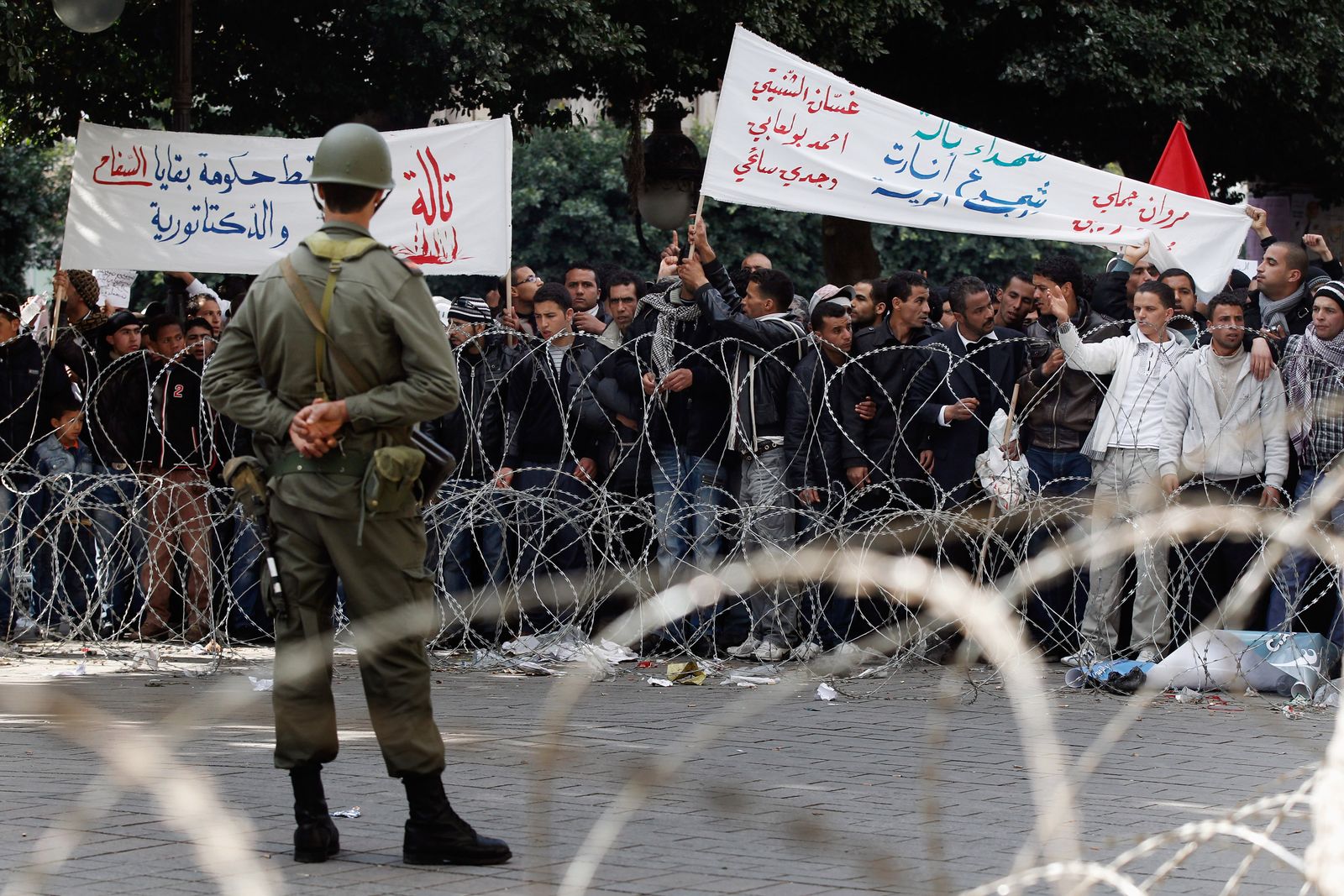 Protesters outside the Interior Ministry in Tunis on Monday