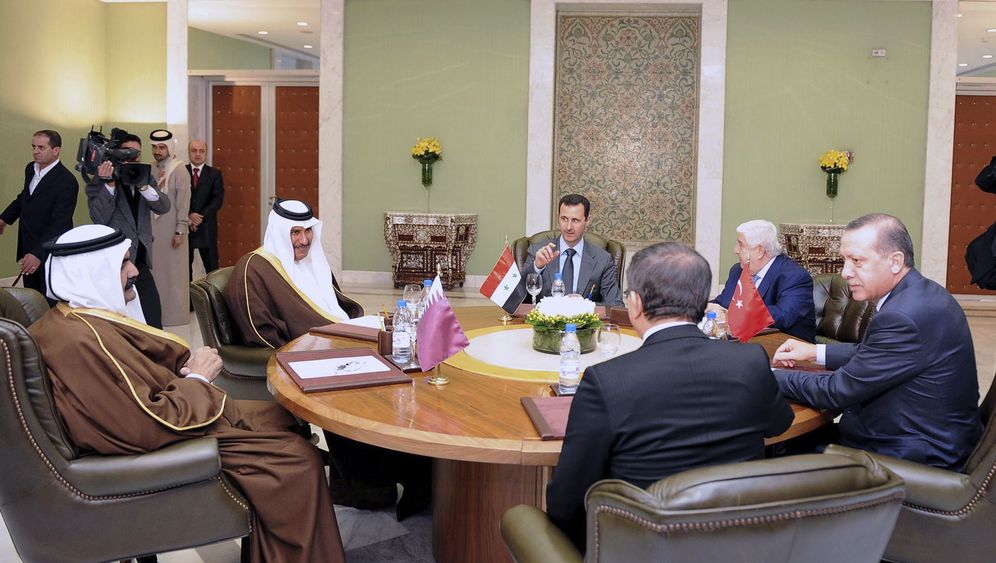 A magnificent building from the 1980s, but only four stories tall and 70 meters (230 feet) long? It was too old, too small and not tall enough. Bulldozers demolished the building a few weeks ago.

The structure in the capital of Doha that once housed the Foreign Ministry of Qatar in a prominent location along the waterfront promenade, the Corniche, next to the emir's palace, is now a pile of rubble.

Qatar's 59-year-old Emir, Hamad bin Khalifa Al Thani, has built a new headquarters for his diplomats. It is a glass tower in a neighborhood of skyscrapers at the opposite end of the bay, a building so large that each of the ministry's three top officials received an entire floor to himself. Each chose the impressive view he would have from his desk: overlooking the roundabout popularly known as the TV Roundabout, because of its location next to studios run by Al-Jazeera, the Arab world's most important television network; across to Khalifa Stadium, where the opening ceremony for the 2022 FIFA World Cup will probably be held; or out to Al Udeid Air Base, the largest air base in the Middle East, where a US military jet takes off for Iraq or Afghanistan every few minutes.

The emirate is too small for its emir. Hamad is the ruler of a country only about half the size of the US state of New Jersey, with a population of only about 250,000. Nevertheless, Qatar currently has more diplomatic clout than most of its much larger neighbors.

As the holder of the rotating chairmanship of the Arab League, Qatar is not only pursuing its own interests in Libya, Egypt and Tunisia, but is also pressing ahead with negotiations on the most important issue in the Middle East today: What is the Arab position on Syria?

No two countries in the Arab world are as drastically different today as the calm, rich emirate on the Gulf and the police state on the eastern shore of the Mediterranean, which is currently coming apart at the seams. There is now only one way to interpret the news coming out of Syria since last week: An armed insurrection is beginning.

Last Tuesday night, a unit of Syrian army defectors attacked an intelligence base on the outskirts of Damascus. According to eyewitness reports, the battle lasted four hours. The rebels reportedly fired on the base with rocket-propelled grenades, while the regime troops returned their fire from combat helicopters. There were 70 casualties on last Monday alone, while some 300 people were killed in the first two weeks of the month. It already seems clear that November will likely be the bloodiest month of the insurrection.

So far, Syria's neighbors have done little more than criticize Damascus and threaten to impose sanctions. They had feared that the country, divided both ethnically and along religious lines, could descend into a civil war, much like Lebanon in the 1970s and Iraq after the fall of Baghdad in 2003.

This concern now seems to have given way to the realization that Syrian President Bashar Assad is no longer viable and, as his regime will not step down voluntarily, a violent end to the crisis can no longer be averted.

"If I were in his shoes, I'd step down," Jordanian King Abdullah II said last Monday. Prince Turki bin Faisal, Saudi Arabia's longstanding intelligence chief, said: "There will be growing popular opposition to him, and killing every day. I think it's inevitable that he will have to step down in one form or another."

Turkish Prime Minister Recep Tayyip Erdogan launched the sharpest attack against the Syrian leader, saying: "Bashar Assad should see the tragic ends of the ones who declared war against their own people," adding that history tends to remember men like Assad as "bloodsuckers." When a Syrian mob attacked the Turkish embassy in Damascus soon afterwards, even the otherwise moderate Turkish president, Abdullah Gül, issued an open threat of war, saying: "If Syrian authorities do not take the necessary measures, if these attacks are repeated, then our reaction will certainly be a different one." The pro-government Turkish newspaper Zaman followed Gül's statement with the headline: "The countdown for Assad has begun."

There has only been one other instance in the recent past in which the region's leaders have so openly called for one of their own to step down: In mid-March, when an international coalition joined forces to bring down then Libyan dictator Moammar Gadhafi.

As in the case of Libya, the condemnation of Assad was preceded last week by a surprising resolution on the part of the Arab League, which was pushed through by Qatar. For weeks, the emir and his cousin, Foreign Minister Hamad bin Jassim al-Thani, had urged fellow Arab League members, from Rabat to Muscat, to eject Syria, one of the organization's founding members.

On the Saturday before last, the Arab League issued a resolution that carried far more weight for Damascus than any appeals or threats from the West: If the regime did not withdraw its troops from Syrian cities within four days, and if it did not allow international observers into the country and enter into a serious dialogue with the opposition, it's membership would be suspended.

The Syrian foreign minister reacted with an angry outburst. The Arab League's decision was "shameful and malicious," he said. "We wanted the role of the Arab League to be a supporting role, but if the Arabs wanted to be conspirators, this is their business." He added that when the Syrians mentioned "Arabs" in this light, they were referring to the residents of the Arabian Peninsula.

The Arab League suspended Syria last Wednesday and gave the country another three days before imposing economic sanctions. But this deadline could now be the last. "We want solutions, not more speeches," Qatari Foreign Minister Hamad bin Jassim said threateningly.

Does this mean that the Syrian regime could end in much the same way as the Gadhafi regime in Libya?

Though the West wants to see a new government in Damascus, the inclination to attack Syria militarily is much less pronounced in Washington, Paris and London, even after the enormous death toll of the last eight months. The country is more complex than Libya, its population is almost four times as large, and its army of 300,000 men is much stronger than Gadhafi's was.

The Assad regime also has a strong ally in Russia. Although Russian Foreign Minister Sergey Lavrov met with a delegation of the opposition Syrian National Council last Tuesday, the criticism he voiced two days later was not directed at the regime, but at the opposition. The attack on the intelligence base near Damascus was an act of "civil war," Lavrov said. He also warned the insurgents and the West against forging "plans for acts of war."

Most of all, however, even the Syrian opposition has shied away from calling for intervention by an international coalition. "The people do not want Western intervention," said Mohammed Riad Shaqfa, the leader of the Syrian Muslim Brotherhood and a member of the Syrian National Council.

But he could very well imagine Turkey intervening, Shaqfa continued. Strategists and diplomats in Doha and Ankara have been weighing this possibility for weeks. In addition to a no-fly zone, they are also considering the establishment of a buffer zone that would extend up to 30 kilometers (19 miles) into Syria from the Turkish border, and that could offer the growing numbers of refugees safe haven and serve as a military base for Syrian army defectors.

"We hope that there will be no need for these type of measures," Turkish Foreign Minister Ahmet Davutoglu said last week, "but there are certain universal values all of us need to respect and protecting citizens is the responsibility of every state." According to the pro-government newspaper Sabah, Ankara had informed the Syrian opposition that there were three conditions: that a no-fly zone be supported by a United Nations mandate, that the initiative be introduced by the Arab League and that the European Union and the United States serve as guarantor powers.

German UN Ambassador Peter Wittig plans to submit a resolution threatening Syria with economic sanctions to the UN General Assembly this week. Qatar and other Arab countries support the measure. This is "progress," Wittig told news agency DPA, noting that it shows "what fundamental changes the Arab Spring has brought about."

Even China, which voted against a Syria resolution in the Security Council in early October, would likely vote in favor of the Wittig resolution this time. Until now, Beijing has persistently adhered to a principle of non-intervention, says Chinese Middle East expert Ma Xiaolin, but if the Arabs themselves are willing to avert a humanitarian catastrophe in Syria, China will also have to support sanctions. "Beijing doesn't want to antagonize the Arab League."

The Arab League, officially called the League of Arab States, was founded 66 years ago. It took a generation before the League's summit meetings no longer served the sole purpose of satisfying the Arab officials' appetite for pageantry, but also could arrive at political decisions that reflected the needs of their people. "Perhaps we are now seeing how our civil uprisings and revolutions are reaching the elite for the first time, the ones who still control the majority of governments in the region," says Lebanese journalist Rami Khouri. "It looks as though the regimes were beginning to recognize the sentiments and moral values of their people."

So far only two governments in Arab League countries have emerged from free elections. They are not the governments of Qatar and Syria. 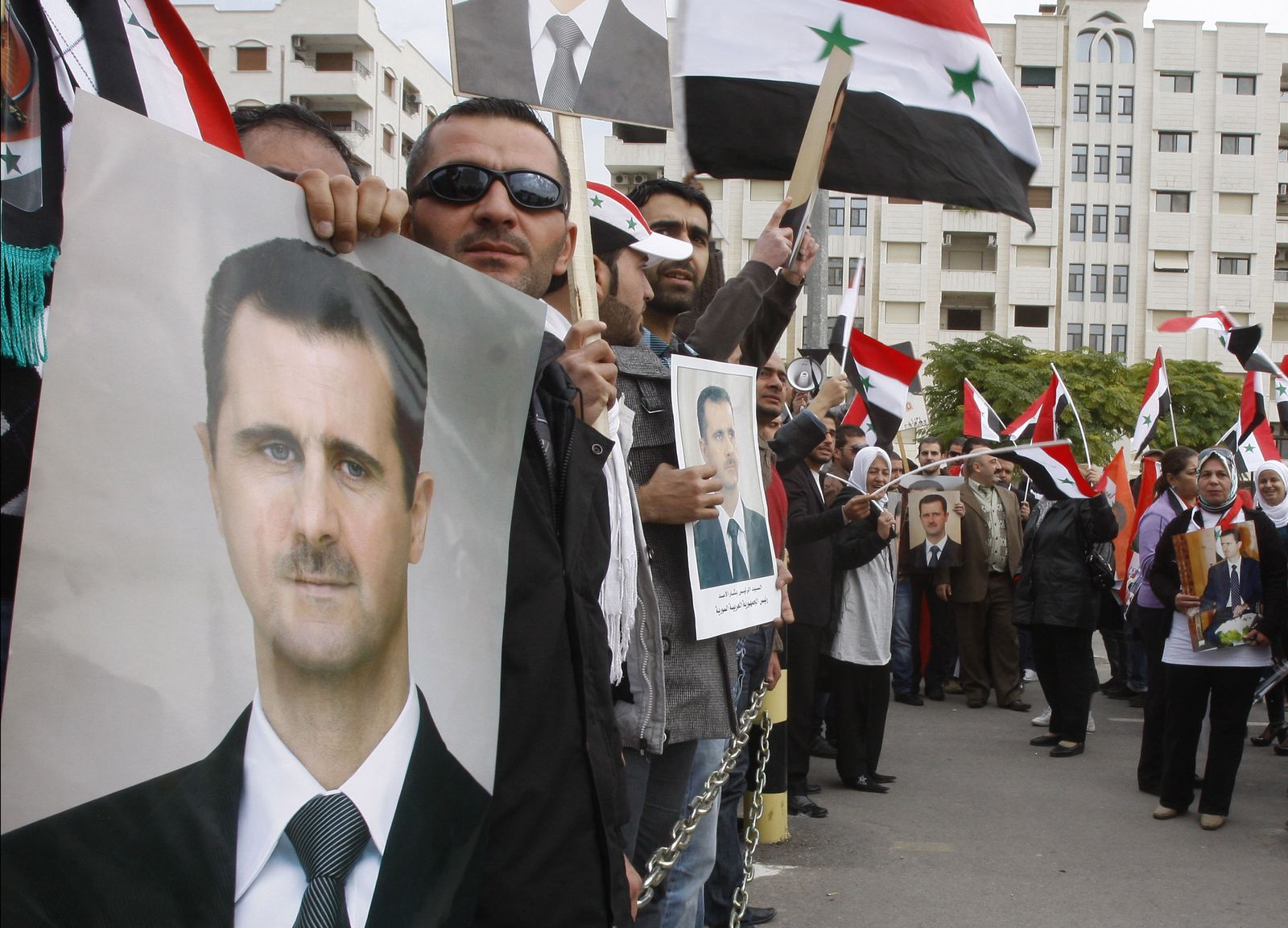 Pro-regime demonstrators are pictured here in Damascus on Nov. 14. They shouted slogans against the Arab League, which Assad has accused of conspiring against his country after they voted to suspend its membership due to his violent crackdown on anti-governemt protesters. 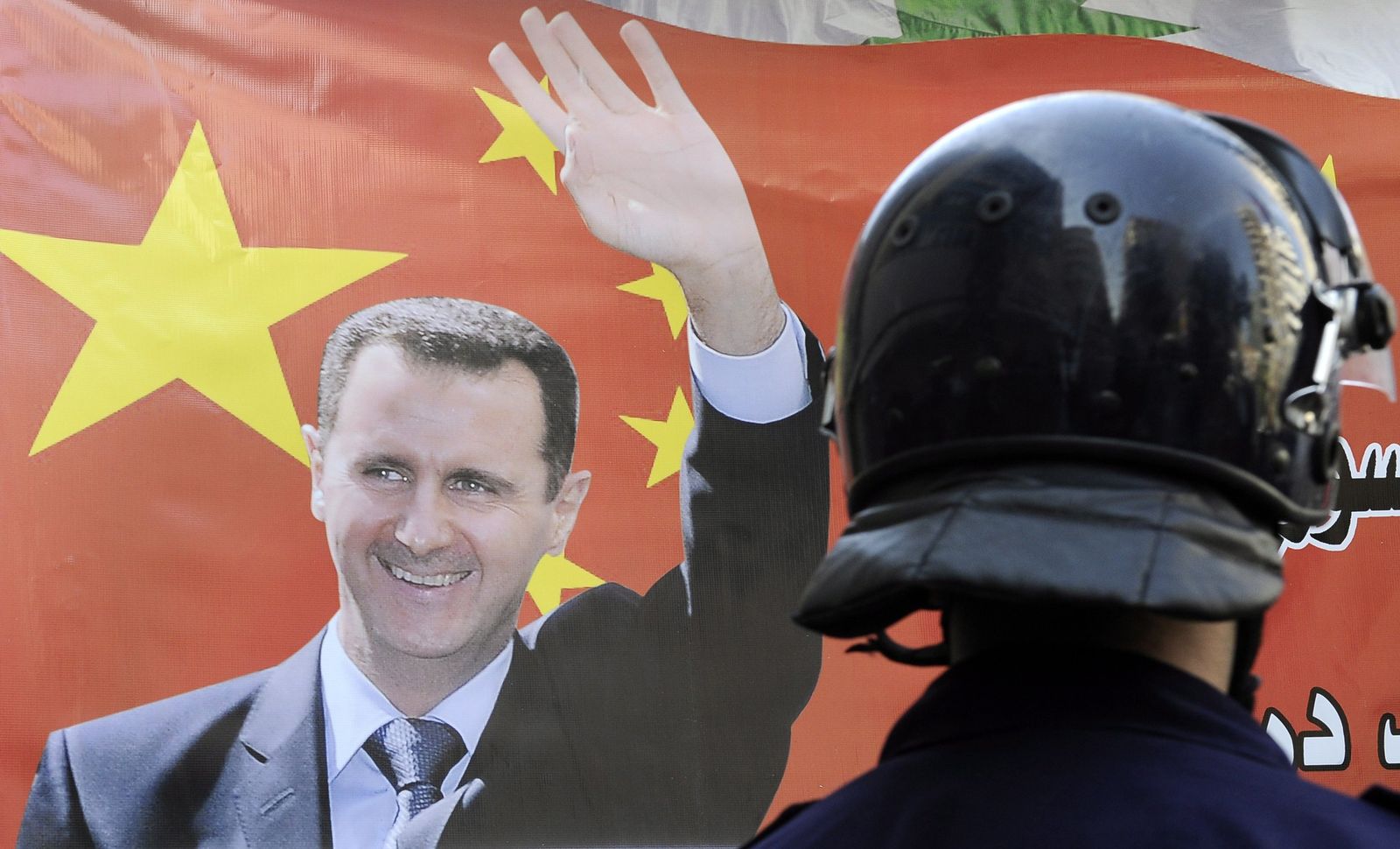 Until recently, Syria's neighbors have done little more than criticize Damascus and threaten to impose sanctions. They had feared that the country, divided both ethnically and along religious lines, could descend into a civil war, much like Lebanon in the 1970s and Iraq after the fall of Baghdad in 2003. Here, a police officer keeps watch at a pro-government event.