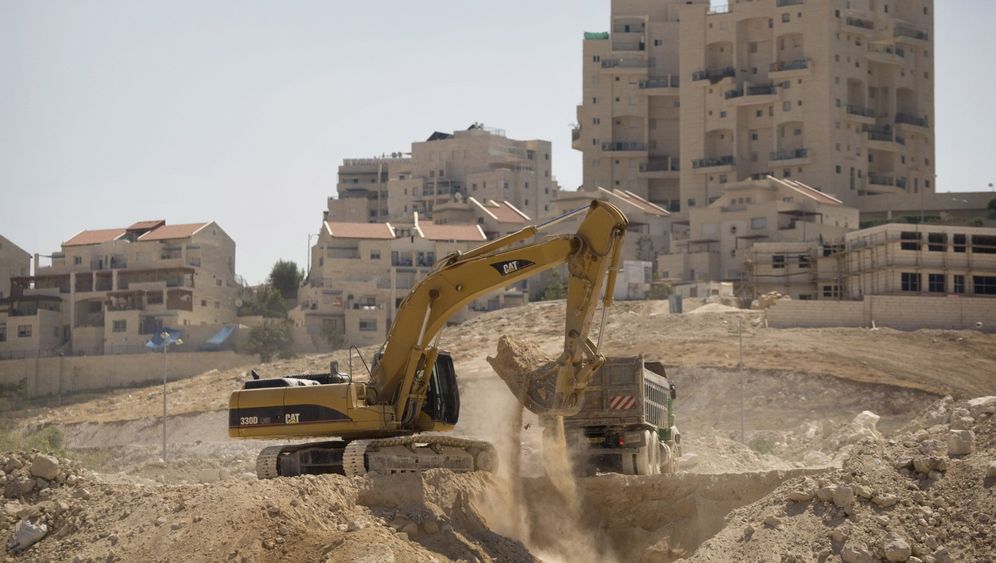 Officially, at least, this is the hour of diplomacy. For the first time in two years, Israelis and Palestinians are meeting for direct peace talks. United States President Barack Obama has invited Israeli Prime Minister Benjamin Netanyahu and Palestinian President Mahmoud Abbas to Washington. Settlement construction is one of the most sensitive issues at the talks.

It's also an issue where the fronts are growing increasingly tense. "As far as we are concerned, we will continue building after we have buried our dead," Naftali Bennett, the general director of the settlers' association Yesha said hours before the start of peace talks. Just a short time after his announcement, the settlers began erecting several symbolic settlements in the West Bank. In an interview with SPIEGEL ONLINE, Bennett had threatening words. "It is not good enough that the moratorium will end on Sept. 26," he said. "Ehud Barak needs to act to approve 3,000 new housing units -- 1,500 of them right now."

The message is clear: After Hamas terrorists shot four Israelis near Hebron, the settlers no longer want to adhere to the 10-month construction stop that expires at the end of September. An army commander told the newspaper Maariv that the settlers threatened to "flood" the West Bank "with thousands of homes." He said he was concerned that dozens of cement mixers would drive in at night to pour the walls and that there was nothing the military could do to stop it.

And why should they if they have the impression that the government doesn't even support the moratorium?

Construction work could soon begin again in 57 settlements. The peace talks that began on Thursday with an official reception thrown by US Secretary of State Hillary Clinton won't change that. After all, construction of settlements also continued during previous rounds of peace talks. From the start of the Oslo peace process in the 1990s until today, the number of Israeli settlers living in the West Bank has tripled -- growing from 110,000 to more than 300,000 people living in 121 settlements and 100 outposts. In addition to that there are 200,000 more settlers in East Jerusalem.

The Land Is Practically Free

Construction may even proceed at a faster pace than before. In the West Bank, there are few signs that the moratorium has even been put in place. In dozens of settlements, excavators and cement mixers are a regular sight, and Palestinians work in temperatures of 40 degrees Celsius (104 degrees Fahrenheit). Around 2,000 homes are currently under construction -- and in most cases, work had begun shortly before or after the start of the moratorium.

One such place is Anatot, a settlement near Jerusalem, that is dotted with flower beds, trees, cute street signs at every entranceway and a street lamp every few meters. Anatot is the perfect suburban idyll. And it's just one of many settlements where inhabitants can quickly forget that they are settlers.

Now there are plans to expand Anatot. A new neighborhood is being erected with 70 apartments, as the construction manager proudly states. The settlement is being expanded by one-third from its current population of around 200 families.

A few of the new homes have already been completed. They're attractive cubes build of creamy white Jerusalem sandstone. A colorful sign at the entrance to Anatot advertises "cottages with quality of life." It's a dream that costs 1.02 to 1.4 million shekel (around €280,000) -- less expensive than a small apartment in West Jerusalem. The construction in the West Bank is massively subsidized by Israel. The land is practically free. After all, it is "state" land. The development costs are paid by the state, and the residents get affordable loans.

Nevertheless, construction is not actually permitted here. The building project is not included in the list of 490 "legal exceptions" which the government managed to make to the settlement moratorium.

The Moratorium 'Was a Fiction Right from the Outset'

"The construction boom here began shortly before the building freeze," says Dror Etkes, who is perhaps the Israeli who knows the most about the settlements. For years he has been documenting settlement construction and submitting complaints against illegal projects.

Etkes is sure that active construction is taking place in at least 46 out of 120 settlements. Building projects have only actually been frozen in five settlements, he says. Even government inspectors have found violations of the moratorium in 29 settlements. So far, however, no construction firm has been called to account over those violations. That is despite the fact that the building freeze, for the first time in Israeli history, is not just a "political" requirement, but is actually enshrined in law -- meaning that any violation should be legally punished.

Additionally, infrastructure projects are not included in the building moratorium. As a result, a number of sewage treatment plants and water reservoirs are being built in settlements -- including on Palestinian land. In Beitar Illit, a new road is being built.

Neither were the associated financial incentives -- the only reason that many Israelis choose to live in the West Bank -- affected by the moratorium. Those benefits include cheap loans, subsidized rents, tax breaks and countless other perks, all of which could easily be cancelled.

"The difference between the level of construction before and during the moratorium is much, much less than the settlers claim," says Etkes. "It's not just that the building freeze has been undermined -- it was a fiction right from the outset." One of the consequences, he says, has been that construction activities have become even more focused on the eastern settlements -- in other words, those small, isolated and often radical settlements that would need to be evacuated if a peace agreement were reached. It is expected that the inhabitants of those settlements would defend themselves with force against such a move.

Construction work is also going on in Kfar Adumim. The settlement is significantly larger than the norm -- 2,700 people live here in the hills between Jerusalem and Jericho. Among them are two members of the Knesset, the two hardliners Aryeh Eldad and Uri Ariel. 30 houses are to be built here and 50 Palestinian workers are employed on the site. One man, who is busy laying bathroom tiles, says they started work a month before the building freeze came into force. In the beginning, they had 300 men working at full speed to lay as many foundations as possible in the short time.

Etkes sees the circumventing of the building freeze here as a "classic example of the cooperation between the settlers and the government": Some of the foundations were hastily laid before the building freeze came into force, some afterwards -- but nobody bothers to police it. "The building freeze was discussed for half a year, that was enough time for all parties to prepare."

This is no different from other settlements. Once the moratorium comes to an end, the settlers immediately begin to build. Or, if they do not need housing right away, they can save the foundations as a "reserve" in case of future building freezes. In addition, dozens of settlers' organizations have submitted building applications to local authorities that could be approved in the coming months.

The tiler will not give his name because he is afraid of losing his job, which pays him a minimum of about €30 a day. But he did say that many of his colleagues began work on the site two days before the construction moratorium in the settlements came into force. He also said that building work is still going on in Har Homa in Bethlehem, even though the building freeze is in force there. Carpenters work at night so as not to draw so much attention.

With Each Project, the Future Clearing of Settlements Becomes More Difficult

Whether that bothers the man as a Palestinian? "What should we do? As long as they are allowed to carry on building here, we'll be here too," he says with a shrug. It is the pragmatism of those who do not believe the Israelis will be leaving the West Bank anytime soon. It is the same almost everywhere near Jerusalem. But what about the isolated settlements, with those near Nablus, near the Jordan Valley, near Hebron. "It's a similar situation," says Etkes.

Ten apartments here, 40 there. In no other place are the projects as massive as at Ramat Shlomo, the Jewish settlement in East Jerusalem where, earlier this year, 1,600 new apartments were approved -- just as US Vice President Joe Biden was travelling to Israel. The Americans were irritated and insisted that the Israelis obide by the construction moratorium. But even small projects bring with them thousands of new settlers -- and with each, the later clearing of settlements becomes even more difficult. And without clearing the settlements there can be no viable Palestinian state.

All it takes is a few figures from Israel's statistical office to determine that no reduction of construction activity worth of mention has taken place. Israel's Channel 10 TV, for example, has reported that 8,000 Israelis either moved to the West Bank or have been born there in the past six months. Projected over the remaining months of 2010, that would be 16,000 people. In recent years -- without the construction moratorium -- the average growth rate was 5.5 percent, which with 300,000 settlers in the West Bank, would mean an annual increase of around 16,500 people. "In other words, the much-discussed construction moratorium has brought us 500 fewer settlers," Etkes says.

For the Palestinians, the time elapsed since the start of the construction moratorium hasn't been a good one. According to Human Rights Watch, the Israeli civil administration in West Jordan has torn down a total of 267 Palestinian homes in recent months, more than ever before. The homes had been built without permits, but that's the case with most new Palestinian homes because they are hardly ever approved.

By contrast, says Etkes, he has no doubt that the homes in the settlement that have been built illegally during the moratorium will, at least some of them, be legalized later. "At the end of the day, there will still be another 1,000 homes more in the West Bank." 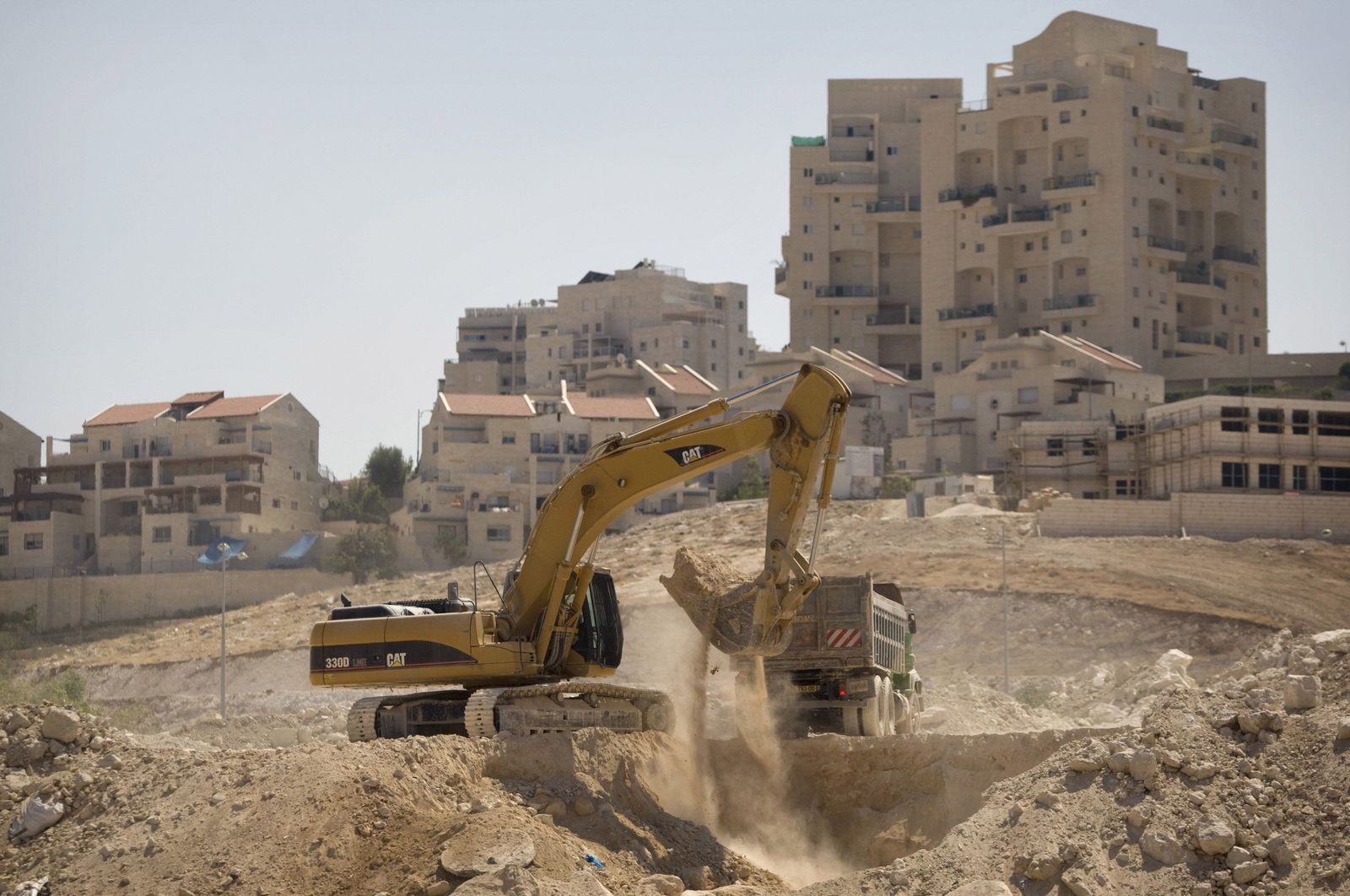 Construction work in the Jewish settlement of Maaleh Adumim near Jerusalem. Officially there is a building freeze in force until September 26th. However many settlers are not complying with the ban.