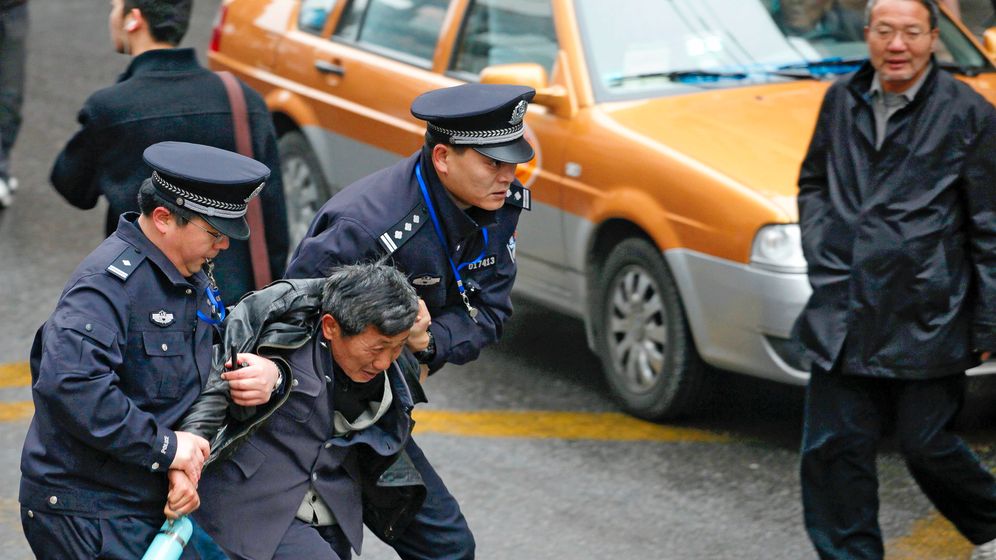 Everything is bright red, from the carpets to the chairs to the flags. In painstakingly determined sequence, Hu Jintao, the Chinese president and general secretary of the Communist Party, and his fellow members of the Chinese leadership walk into the Great Hall of the People, cheerfully applauding each other to the beat of a military band. The brightly colored costumes of national minorities, like the Tibetans and the Uyghurs, are included as an obligatory ethnic interlude.

At first glance, everything was just the way it is every year, when the National People's Congress, Beijing's show parliament, convenes and China's communists celebrate their successes. But something was different this time. It was as if an uninvited guest were disturbing the artificial show of harmony, someone who couldn't be mentioned by name but makes everyone nervous all the same.

Only in the Mind

The chimera that has the entire country on edge is called the "Jasmine Revolution." Activists on the Internet chose the term, inspired by the Tunisia rebellion of the same name, for a series of demonstrations in which the Chinese were to take to the streets to demand more freedom of expression. So far, however, such upheavals exist purely in the nervous minds of the country's leaders. The fascination with freedom that triggered the popular uprisings in faraway North Africa has not resonated in any measurable way with the 1.3 billion Chinese. This is because there is a world of difference between China's outlook for the future, a result of its economic successes, and the hopelessness the subjects of many Arab dictators face.

Nevertheless, it is telling how Chinese party leaders relate to the fates of the Arab autocrats who have already been ousted. They have increased surveillance of their own people with the help of a massive security operation of a magnitude the People's Republic has not experienced since the 2008 Summer Olympics in Beijing.

Reacting to the unrest in the Middle East, Communist Party leader Hu called together top officials from the provinces and the military for a retreat in February. Vice President Xi Jinping, who is expected to replace Hu soon, was also present. The subject of the meeting was how the authorities can prevent social conflict and guide public opinion on the Internet in the desired direction.

The group came to the conclusion that unrest and demonstrations of the sort that have taken place in North Africa must not be allowed to happen in the first place. Since then, words like "jasmine" have been completely blocked on the Internet. Even a traditional folk song that sings the praises of the fragrant blossoms of the "Mo Li Hua" ("Jasmine Flower") fell victim to the censors. The authorities also placed more than 100 dissidents, attorneys and activists under house arrest.

The budding superpower appears to be chasing a phantom. On several weekends, the police sealed off shopping areas in China's biggest cities, including Wangfujing, the famous pedestrian zone in Beijing, whose name also ended up on the Internet black list.

But instead of the feared protesters, only large numbers of police and plainclothes thugs have appeared and hunted down foreign reporters. Some police officers came with attack dogs, while others were disguised as street cleaners. The police also disabled targeted segments of the mobile wireless networks for periods of time. Some foreign correspondents, including reporters with Germany's ARD television network and Stern magazine, were interrogated for hours. A TV journalist with Bloomberg News was even beaten.

The Chinese security forces also harassed a few representatives of the Western media in their apartments, using nighttime visits to intimidate reporters into behaving "cooperatively." Otherwise, they warned, the authorities would refuse to extend their work permits at the end of the year.

The regime believes that heightened pressure on Western media will close the last few gaps in the Chinese wall of censorship, with which the giant country is successfully sealing itself off from the rest of the world. Twitter, Facebook and YouTube have long been blocked.

Now Beijing wants to tighten the reins even more. The government will "improve management of information networks," Premier Wen Jiabao announced in his progress report to the National People's Congress.

The planned measures are part of a comprehensive security plan, with which the Communist Party intends to enforce the "social harmony" it is constantly evoking. This year the government plans to increase expenditures for the police, state security, the paramilitary police, courts and prisons by 13.8 percent, to 624.4 billion yuan (about €68 billion, or $95 billion).

In doing so, the regime is beefing up the police even more than the military, which reports directly to the party. According to official figures, government spending on the People's Liberation Army will be increased by 12.7 percent, to 601.11 billion yuan (about €65 billion, or $91 billion).

But even the military budget -- which barely reflects the development of new weapons systems like stealth bombers and aircraft carriers -- is ultimately in place to preserve power. The money is being provided to increase the standard of living of China's 2.3 million soldiers, thereby securing their loyalty.

But do Beijing's rulers have any reason to be nervous? China surpassed its competitor, Japan, as the world's second-largest industrialized nation last year, when its economy grew by 10.3 percent. A new study by McKinsey, the American management consulting firm, predicts that the People's Republic could become the world's biggest market for luxury goods by 2015.

But the Chinese leaders know better than anyone else that the economic miracle with which they legitimize their power is in danger. For instance, provincial officials are fueling the real estate boom by selling more and more land, and stirring up resentment in the process. Farmers who protest against the expropriation of their land are tormented by police officers and government thugs, or even thrown into so-called "black jails" without being charged.

Despite these risks, thousands of Chinese subjects rebel against the communist authorities year after year, almost always in protest against the same chronic abuses: corruption, land-grabbing, environmental pollution and low wages.

To address these ills, the government is trying to change the recipe for China's continued development in its new five-year plan, which runs until 2015. Under the plan, the economy will grow more slowly and more sustainably in the future -- by 8 percent this year. Premier Wen also promises to curb price inflation, stimulate consumer spending and enact greater protections for an already damaged environment.

But the change in course also comes with risks for the regime. This is especially applicable to the steep price inflation in the real estate market, which the Communist Party has been trying to curb for some time. Condominium owners recently protested in the eastern part of Beijing, because apartments in new buildings in the neighborhood were being offered for sale below the market price. The citizens feel cheated of the amount of money they invested in the apartments they bought a year ago for more money.

Such protests in the capital are a cause of concern for the party leadership. Until now, it has counted on the nouveau riche middle class as one of its most loyal pillars of support against potential troublemakers like migrant workers and national minorities.

Now China's rulers are in a predicament. The harder they crack down on legitimate protests, the greater the resentment their actions will trigger. But since the Tunisian revolution, China is taking a hard line until further notice. "Stability is the place all hearts yearn to reach," writes Jiefang Ribao, the Communist Party mouthpiece in Shanghai.

Meanwhile, the surveillance state continues to build up its forces. The city of Beijing plans to shortly introduce a mobile phone technology that uses positioning signals to automatically detect large gatherings of people. The system is designed to untangle traffic jams, say its inventors.

That may be true. But it's also clear that the system will enable the security forces to reach potential hotspots of unrest even more quickly in the future.