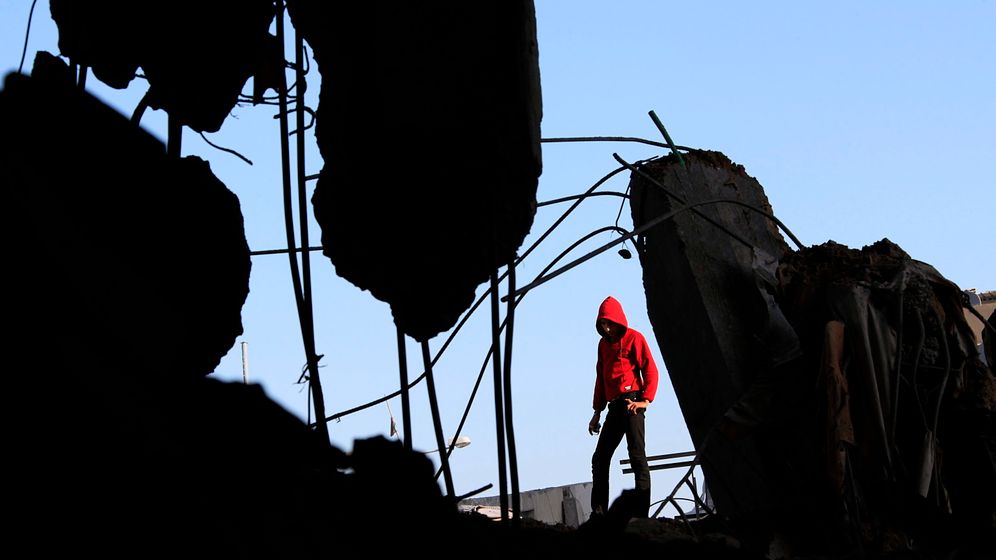 The arsenal of Hamas in the Gaza Strip has been under constant fire recently. For six days the Israeli air force -- which claims to be the best in the world -- has bombed targets in the area until the ceasefire, which is due take effect on Tuesday night. So it's almost astonishing that there are any missiles left that can still be fired at Israel. But in Ashkelon and other Israeli cities near the coastal strip ruled by the Islamists, the air raid sirens sounded again earlier on Tuesday.

It seems that the military power of Hamas has only been weakened, not broken. Some of their rocket positions appear to be so well concealed that the Israeli air force hasn't been able to destroy them. The Israeli government says some 1,000 rockets have been fired from Gaza since last Wednesday. The air force has said it destroyed several times more on the ground, but some -- presumably underground -- rocket launchers were still working on Tuesday.

Such clues are the only way to assess the size of the rocket arsenal of Hamas, the types of rockets and the quality of the concealment. The Palestinian radicals boast about their military capabilities and have in the past given journalists tours of workshops where young men built Qassam rockets -- but for tactical reasons, Hamas wants to leave Israel and the rest of the world in the dark about how many rockets it can fire at Tel Aviv and Jerusalem.

Weapons From Iran and China

One can only speculate about the firepower Hamas and other extremists in Gaza have at their disposal in this unequal battle against Israel. Israeli sources believe that the arsenal was well-stocked with domestic and foreign makes at the start of the current conflict.

The Islamists are believed to have had some 100 Iranian Fajr 5 rockets and rocket launchers. The Fajr 5 is six-and-a-half to seven meters long and the warhead weighs over 175 kilos. It has a range of up to 75 kilometers, which puts Tel Aviv and Jerusalem within range.

Several Chinese WS-1E rockets are believed to have been in its arsenals as well. They have a range of some 40 kilometers.

Hamas is also known to have several hundred Grad rockets of various types. They can be equipped with different warheads and have a range of 20 to 40 kilometers. The Grads too are believed to have come from Iran.

In addition to the imported weapons, Hamas has thousands of rockets produced in Gaza. The mortar rounds and primitive Qassam rockets made with fertilizer and explosives smuggled into Gaza have a range of just 10 to 15 kilometers. Iranian engineers are believed to have been advising the weapons builders for some time, and better models with bigger ranges are being built.

The ample weapons stocks were thanks to one man: Hamas military chief Ahmed Jabari. His killing in an Israeli missile strike last Wednesday triggered the current conflict. Jabari knew how to exploit the changed political situation in the Middle East. After the Muslim Brotherhood, the mother organization of Hamas, came to power in the Arab Spring, the path was clear for the delivery of heavy weapons to Gaza.

Observers say the Fajr 5 has been smuggled to Gaza in the last 18 months, flown from Iran to Sudan and driven by trucks through the Egyptian desert to the border with Gaza. It seems inconceivable that this happened without the knowledge and tacit approval of Egyptian officials. The launchers are more than 10 meters long and the weapons system weighs 1.5 tons. Once they had arrived at the border, the rockets and launchers are believed to have been dismantled and brought to Gaza through tunnels. There are also reports that weapons from plundered arsenals of former Libyan dictator Muammar Ghadafi found their way into the Gaza strip.

Israel had tried to put a stop to the arms build-up before its current campaign. At the end of October, there was mystery air raid on a weapons factory in Sudan that is believed to have been carried out by Israel. Before that in April 2011, an air raid killed a Palestinian man in Sudan. He is reported to have been the successor of the weapons procurer of Hamas, Mahmoud al-Mabhouh, who was killed by Mossad in Dubai in early 2010.

In March 2011, Israel is also reported to have attacked a weapons convoy in Sudan. In addition, the Israeli air force has mounted repeated bombing raids against tunnels used to smuggle goods and weapons into Gaza. Rocket launch sites have also been repeatedly attacked in recent months. But Israel's attacks have also targeted the men who procure and fire the rockets. Jabari was the most prominent weapons specialist of Hamas. But in the months before, Israel had killed dozens of men who it suspected of belonging to the rocket militia.

There is no doubt that the military capabilities of Hamas have been severely curtailed. But the attacks haven't broken the organization's power. As long as the supply route Iran-Sudan-Egypt remains intact, the Islamists' arsenals will soon be replenished.

But it will be hard to persuade Cairo to put a stop to the weapons smuggling through its territory. It will take long, extensive negotiations. The Palestinians and Egypt will demand that Israel and the United States make concessions. The ceasefire between Israel and Hamas is only the start.