One of the most bizarre verbal exchanges in Syrian President Bashar Assad's war against his own people recently took place in the Damascus suburb of Douma.

An opponent of the regime struck up a conversation with an extremely young soldier from the eastern part of the country: "After hesitating for a long time, the soldier accepted a sandwich and was amazed that someone was speaking Arabic with him," recalls the activist. "He asked where he was and was totally amazed when he found out that he was in Damascus. His commanding officer had told him that they were going to Israel to fight against the Zionists. But then he wondered why the Israelis were speaking Arabic with a Syrian accent."

Assad is keeping his troops in the dark. To prevent them from defecting, the soldiers are deployed to new locations every few days, primarily in the sprawling, poor northern suburbs of the capital city -- with no mobile phones and no knowledge of where they are. Living on scant rations, often going unpaid for months and totally exhausted, many take donations of bread from local residents and, time and again, accept a discreet offer to join the rebels.

After engulfing the cities of Homs, Idlib and Aleppo, the brutality and chaos of war has now also spread to the capital Damascus. The rebellion has reached the outskirts of the inner city -- Mezze in the west, Kafr Souseh in the north. Shots and explosions can be heard at night. Everyone knows, says a businessman who fled to the Jordanian capital Amman, that the fighting has entered its final stage: "But how long will it last? A month? A year?"

The war in Syria is a war with opposing trends.

On the one hand, the regime's military machine is taking city after city. After capturing Baba Amr and now Idlib in the north, it is now attacking Daraa in the south. Residential neighborhoods are shelled by tanks and artillery. There are reports of people executed with shots to the head, corpses found with their eyes poked out and children beaten to death.

The borders with Lebanon and Turkey are being transformed into minefields where fleeing civilians are maimed or killed. A recent report by Amnesty International lists 31 methods of torture used by the regime, including electric shocks, rape and the so-called "German chair," which can result in permanent damage to backs and limbs.

Even with a death toll of 8,000 people, at least according to a conservative estimate by the United Nations, the US, Europe, Turkey and the Arab states are still shying away from doing more than issue sanctions and stern warnings as long as Russia and China, which both hold permanent seats on the UN Security Council, continue to block every resolution against Syria. There are no plans for military intervention or supplying arms to the rebels.

On the other hand, instead of dying down, the rebellion is growing. Contrary to assumptions that the pitifully armed Free Syrian Army (FSA) is weakened with each defeat, Assad's troops can barely keep large areas of the country in check. Government forces were able to shell Baba Amr, a suburb of Homs, on three sides, yet the big Sunni quarter in the heart of the city remains largely in the hands of the rebels. There are now daily protests even in Aleppo, the once calm financial and commercial center in the north.

The Syrian government's announcement that it intends to hold elections on May 7 is nothing but a bluff. The ruling clique, consisting of the Assad family and a number of generals, is repeating the policies of the dynasty's founder. Following his putsch in 1970, Hafez Assad also pledged more democracy and introduced a new constitution. When resistance mounted in the late 1970s, he had cities besieged and shelled, entire villages razed to the ground and hundreds of prisoners executed in a campaign that lasted three years. At the time, virtually none of this was leaked to the outside world until the brutal destruction of the old city of Hama in 1982. Afterwards, there was utter calm in the country -- until a year ago.

In its apparent helplessness, the Western world is acting as if diplomacy still has a chance. But last Friday UN special envoy Kofi Annan was still waiting for a response from Damascus. It is "a basic misunderstanding" to view the Syrian dictatorship according to the standards of a normal government, says one of the few remaining European ambassadors in Damascus, choosing his words with caution. Indeed, the regime more closely resembles a mafia cartel, which is doing everything it can to defend its turf.

Until recently, a sign at Damascus International Airport greeted new arrivals with "Welcome to Assad's Syria," and that's exactly what it is: a country whose leading family acts as if it belongs to them. All branches of government, as well as legal and illegal business transactions, are directly or indirectly controlled by family members. If the Assad family were to lose its grip on power, it would spell disaster for the ruling Alawis, who make up less than 10 percent of the population, but control all key positions.

The rebellion is to be put down "using all means," a phrase that defected soldiers and officers say continuously crops up in military commands, and has even recently surfaced in Assad's hacked e-mail correspondence.

This shedding of all restraint is also illustrated by the return to influence of two of the president's cousins, whose criminal activities once even went too far for former dictator Hafez Assad. Fawwaz and Munzir Assad, the sons of Hafez's inconspicuous brother Jamil, used their influential names to forge a mafia empire in the northern port city of Latakia during the 1990s. They controlled the arms and drugs trade, along with the smuggling of predominantly Russian prostitutes to Syria.

Even back then, their smuggling gangs and groups of thugs went by the name of Shabiha: ghosts that the police and intelligence services cannot touch. Eyewitnesses from Latakia recall violent incidents involving the two men: how Munzir used a weapon to threaten a traffic cop who was trying to stop him, and then forced the officer to clean his car with a Kleenex tissue -- and how Fawwaz was dining in the city's finest fish restaurant when he saw a smudge on a glass and started shooting in all directions.

In 1998, Munzar was arrested on the orders of Hafez Assad and kept in jail for a while. In the early years of Bashar's rule, these two godfathers, with their short haircuts and penchant for wearing sunglasses, were seen as the black sheep of the family. Now, it's a different story. Their Shabiha have become pro-government militias that are allowed to beat, murder, rape and pillage at will. In addition to their daily pay, equivalent to some $40 (€30), this carte blanche for violence and personal gain has caused their ranks to swell by tens of thousands. The Shabiha are primarily Alawis, but also include a number of Sunnis and Druz, and in the Kurdish areas, it is high-ranking officials in the Kurdistan Workers' Party (PKK) who assault protesters at demonstrations.

Assad's regime has created a monster that is slipping out of its control. The Syrian pound is rapidly losing value, and this is impelling the country's rulers to continue their violence. As soon as the Shabiha can no longer be paid, the only alternative is to have additional cities attacked to create opportunities for looting.

Even inside the intelligence services, which are completely commanded by Alawi officers, greed is taking the upper hand and overshadowing all political objectives. At first, arrested demonstrators and activists were occasionally released in exchange for ransom money.

Now, according to statements by former fellow prisoners, businessmen are being thrown into prison, above all at the detention facilities run by the Syrian Air Force's intelligence service -- not because they oppose the regime, but because their families are able to raise massive amounts of money to purchase their freedom.

Syria is in the process of sinking into a nightmare, which, despite all of today's horrors, has only just begun. There can be no going back, for either side: Assad's regime has to fear that revenge will be exacted by its victims if it now shows signs of weakness. For their part, the rebels fear that they will be wiped out if the regime regains control of the situation.

"It's a question of numbers," says Abd al-Bari, a wounded religious fighter from Homs, who is now being treated at a hospital in the northern Lebanese city of Tripoli: "There are 18 million Sunnis against him. Assad must kill them all. Otherwise, we'll win and kill him and his henchmen." 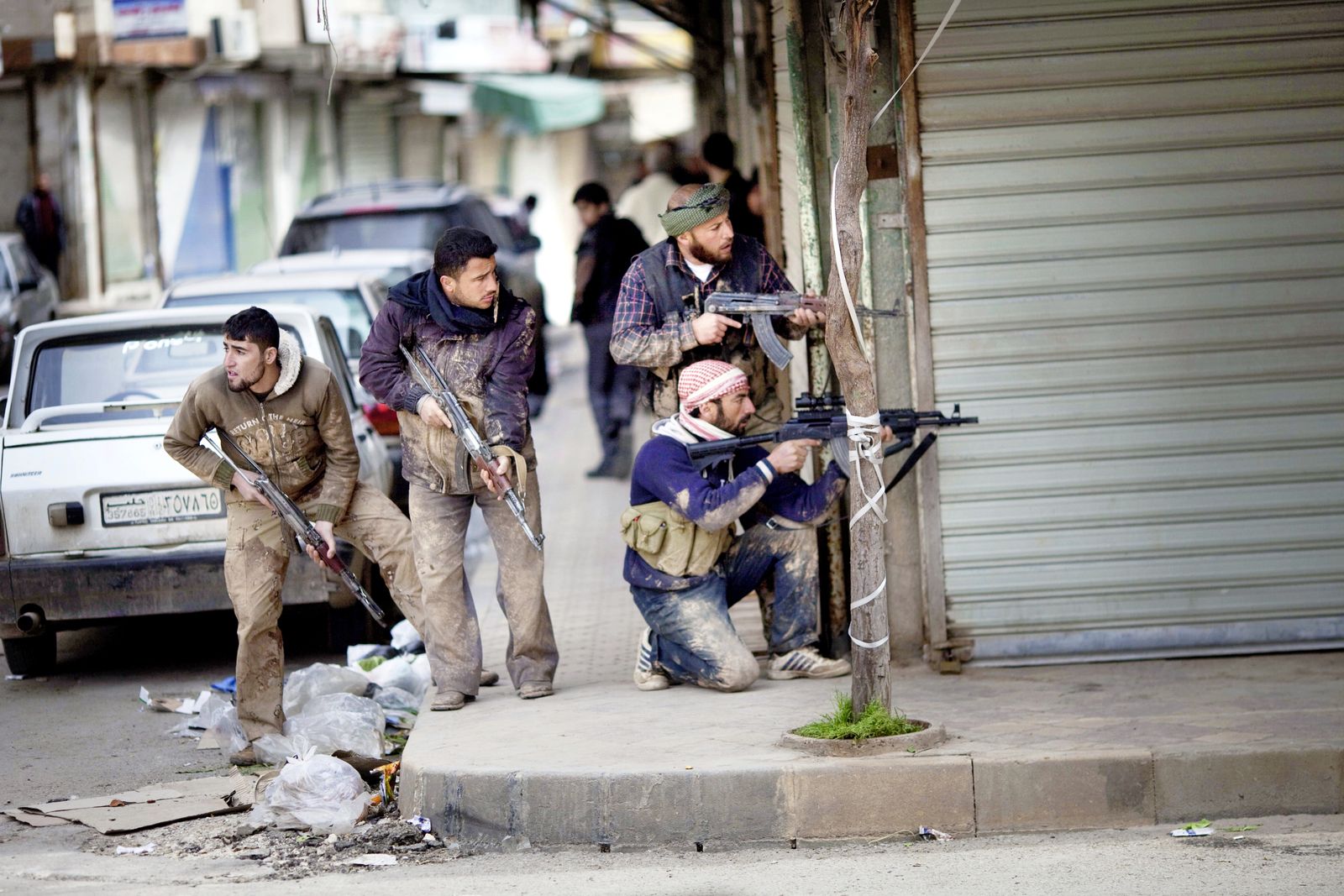