German Chancellor Angela Merkel has continued to send friendly signals to Kiev despite Ukrainian President Victor Yanukovych's rejection of the planned Association Agreement signing with the European Union. Merkel said on Wednesday the offer for closer cooperation remains: "On the strength of the Eastern Partnership, we have offered Ukraine an invitation. This invitation stands."

With regard to the decision in Kiev, Merkel spoke of "structural problems" in the relationship with Russia. "At the moment, a turn towards Europe is always seen as a turn away from Russia." This "one-or-the-other mentality" must come to an end, she said. The chancellor called for the Kremlin not to pressure former Soviet Republics like Ukraine. "The Cold War is over. Countries must be able to make decisions freely."

Meanwhile, Lithuanian President Dalia Grysbauskaite accused the Kremlin of blackmail. "The actions of Russia towards countries like Ukraine, Moldova or Georgia show that this country still employs uncivilized methods," Grysbaukaite told the German newspaper Die Zeit. It is inconceivable "that a country in the 21st century would still blackmail other countries in this way," she said.

Russia had threatened trade sanctions if Ukraine signed the Association Agreement, which was supposed to take place on Friday. The leadership in Kiev had not resisted the pressure, the Lithuanian president argued, saying Ukraine may now face the same fate as Belarus which is now almost entirely dependent on Russia.

In the wake of Yanukovych's decision, there have been several days of street protests in Ukraine. In a TV interview on Tuesday, the Ukrainian president said his country only wanted to secure better conditions from the EU for the treaty and argued the dispute over the imprisoned former prime minister Yulia Tymoshenko shouldn't hamper rapprochement efforts between Kiev and Brussels. The EU had made Tymoshenko's release from prison and access to better medical treatment a condition for the Association Agreement.

In a statement read by her daughter Eugenia on Wednesday evening, Tymoshenko called for the EU to abandon its condition that she be set free. She said, "I fervently call upon you to sign the agreement on Friday without hesitations and conditions -- including the one calling for my release."

Her statement argued it is not only necessary for "political prisoners" to be released, but, more importantly, for "Ukraine to be freed." The agreement would allow her country to "overcome a chasm of civilization" which was created "through false ideologies and aggressive empires."

'We Underestimated the Drama'

On Thursday, European Parliament President Martin Schulz admitted EU officials made mistakes in their negotiations with Ukraine. "I think we underestimated the drama of the domestic political situation in Ukraine," he told German public radio station Deutschlandfunk. Ukraine, he said, "has been in a deep economic and financial crisis" since the introduction of democracy. "They desperately need money and they desperately need a reliable gas supply," he added.

Schulz said he understood why Ukraine moved towards Russia. "It is not especially popular in Europe to help states which are in a crisis ... and if you look at Moscow's proposals, they would offer Ukraine short-term assistance that we, as Europeans, cannot and do not want to afford."

German Chancellor Merkel is traveling on Thursday to an EU summit in Lithuania with its eastern neighbor countries. Yanukovych is expected to attend as well. 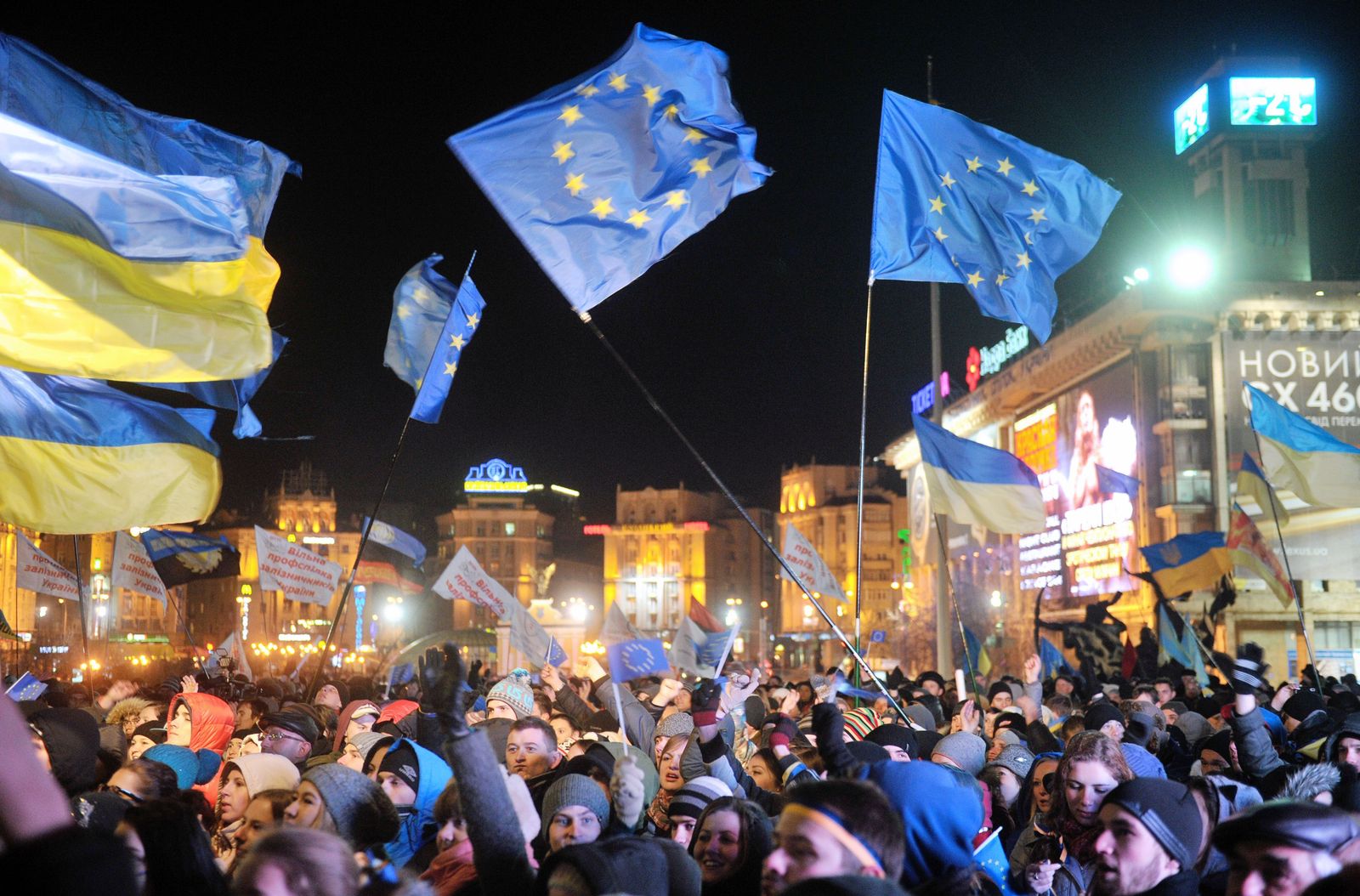 Ukrainians wave flags of Ukraine and of the European Union in central Kiev on Wednesday.