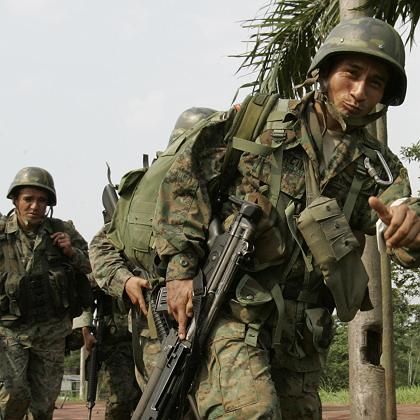 Ecuadorean soldiers heading for the border with Colombia on Monday.

Raúl Reyes, the bearded No. 2 of the Revolutionary Forces of Colombia, or FARC, was always a welcome guest in the Ecuadorian capital of Quito. He visited the city repeatedly to meet relatives and to recover from combat missions in his home country, Colombia.

He had especially close contact with the interior minister of Ecuador, Gustavo Larrea. "Larrea is interested in establishing official relations with FARC on behalf of President Rafael Correa," Reyes wrote in a letter to the "Secretariat," the top decision-making body of the guerrilla group.

That letter was reportedly stored on Reyes' laptop, which Colombian soldiers seized over the weekend after an air strike and ground assault on a FARC base camp in Ecuador. The operation killed 17 FARC fighters, including Reyes. The Colombian government celebrated the attack, which had doubtless been prepared with the help of American surveillance technology, as the "most severe blow against FARC since its inception."

It's true that Reyes' death is a major blow against FARC. The stocky rebel boss -- who wore a Rolex watch -- was the group's second most important leader, after their legendary commander Manuel Marulanda. He was also one of the most radical. He defended the kidnapping of politicians and other civilians as part of the group's combat strategy. He was also the main contact for journalists and the French government, which is desperately trying to secure the release of French-Colombian hostage Ingrid Betancourt.

Reyes forged an international alliance which participated in FARC's high-publicity release of eight hostages in recent months. The group's most important partner was Venezuelan President Hugo Chávez, who ordered a minute of silence on television to honor Reyes. Nicaraguan President Daniel Ortega, a former leftist guerrilla himself, also outed himself as a "comrade" of the Colombian rebel leader on Sunday.

And now Rafael Correa, the populist left-wing president of Ecuador, can apparently also be counted among FARC's friends, if the data on Reyes' laptop are to be believed -- something Interior Minister Larrea denies.

Correa was quick to reject Colombia's apology for the military strike on its territory, and sent troops to the border with Colombia. He had evidently coordinated his response with his alter ego Chávez, who threatened to declare war on Colombia if it conducted a similar strike on Venezuelan soil. On his TV program "Aló Presidente," Chavez said he was dispatching tank units to the border and putting the air force on alert.

Colombia's strike was indeed a clear breach of Ecuador's sovereignty. The FARC camp was located in the Ecuadorian jungle, 1.8 kilometers (1.1 miles) from the border with Colombia. But Colombian President Alvaro Uribe has been warning Quito for years that FARC operates on Ecuadorian territory. The rebels have well-established camps in Ecuador, they smuggle large quantities of cocaine out of Colombia via Ecuador, and they probably held several of their hostages in Ecuador, at least for a time. That is according to former senator Luis Eladio Pérez, who was released by FARC last week. Simon Trinidad, one of FARC's most important commanders, was arrested in 2004 in Quito on the Boulevard Amazonas, the Ecuadorian capital's main shopping street.

If the information on Reyes' laptop is true, the guerrillas have such good contacts with Ecuador's government that they even had the audacity to ask Correa for a favor: they wanted him to withdraw soldiers and police who didn't like FARC from the border region and replace them with troops who were more favorably disposed to the guerrillas.

Is South America on the brink of war? Venezuela's President Hugo Chávez has announced that he will back his friend Correa "unconditionally." A little war might help Chávez distract his people from domestic problems. His opinion poll ratings have fallen to an all-time low. The poor used to back him unquestioningly, but many of them now blame him for supply shortages in this oil-rich economy. The people of Venezuela have to stand in line for milk, meat, eggs and other staple foods -- a result of Chávez' economic policy errors.

Analysts say many military commanders may refuse to obey Chávez if he actually declares war. The armed forces are unhappy with the gradual increase in political influence in their ranks. Venezuela is traditionally peaceful and has never waged a war against a neighbor. The country wouldn't stand much of a chance against battle-hardened Colombian troops, despite Venezuela's new Russian-made weapons and aircraft.

Besides, Venezuela and Colombia depend on each other economically. Venezuela gets most of its food from Colombia, and without Colombian immigrant laborers the oil-dependent economy would face collapse. Whenever anything works in this laid-back Caribbean nation, it's usually thanks to a hard-working Colombian.

Nevertheless, one can't rule out the chance Chávez might hurl himself into a military adventure. He's a soldier, has a military mindset, and would probably love to enter the history books as a martyr.

It wouldn't be the first war in Latin American history. In 1995 a border dispute between Peru and Ecuador led to skirmishes between those two countries, and memories of the Falklands War between Britain and Argentina remain fresh.

It's now up to the big regional powers Mexico, Argentina and Brazil to defuse the situation. Brazil's President Luis Ignácio "Lula" da Silva in particular must prove that he's a suitable peacemaker in times of crisis. On Sunday there was intense telephone contact between the governments of Argentina and Brazil as Lula and Argentinian President Cristina Kirchner discussed how to respond. Mexican President Felipe Calderón has also offered to mediate.

Reyes' death may end up speeding up the resolution of the hostage crisis, contrary to initial fears. Reyes was regarded as a hardliner in the FARC Secretariat. Colombian experts have blamed his intransigence for FARC's refusal to agree to a prisoner exchange. Reyes may now be succeeded by Commander Ivan Márquez, who is seen as more ready to make concessions.