It was a good week for Syria's Foreign Minister Walid al-Moualem. Last Tuesday, he was part of a group of Syrian and Turkish politicians that met at Oncupinar, a border crossing between Syria and Turkey, to mark the removal of entry visa requirements between the two countries.

It was a big step. As recently as the late 1990s, the two neighbors were on the verge of conflict due to Syrian support for Kurdish resistance fighters in Turkey. Parts of the Turkish-Syrian border are still mined. Times, though, have changed: These days, the two countries cooperate on joint military maneuvers and have created a High Level Strategic Cooperation Council.

A 'Spectacular' New Relationship Between Turkey And Syria

Indeed the fact that Ankara and Damascus are planning to work together militarily shortly after signing the visa exemption agreement is nothing short of spectacular. It is also a sign of just the sort of neighborly relationship that the European Union likes to see from its membership candidates. Still, the gathering on the Turkish-Syrian border would likely have generated little attention were it not for the news that immediately preceded it: Israel, a sworn enemy of Syria, was uninvited from a planned international military exercise on Turkish territory.

The reaction was prompt. Both the US and Italy immediately cancelled their participation in the maneuver, code-named Anatolian Eagle. Turkey tried to put a brave face on things, saying merely that the "international elements" of the exercise had been cancelled and tried to explain it away as being the result of "technical problems."

Later, though, it was rumored that the Turks were angry with the Israelis because of the late delivery of unmanned Heron surveillance planes. And then Turkish Prime Minister Recep Tayyip Erdogan joined the fray, indicating that the exclusion of the Israelis was indeed politically motivated -- a response to Israeli air strikes in the Gaza Strip. Turkey, Erdogan said in an interview on the television channel al-Arabiya, was merely acting "in accordance with his people's conscience." His people, Erdogan assured viewers, "were rejecting Israel's participation." Additionally Turkish Foreign Minister Ahmet Davutoglu noted that Turkey cannot afford to be seen as Israel's military partner at a time when there are no efforts being made for peace.

These are strong words -- and cause for unease in Israel. Israel is too small to conduct air force exercises of its own, and the relationship with Turkey -- Israel's only Muslim ally in the region -- is vital. "Our relationship with Turkey is long-standing, important and strategic in nature," the Israeli Defense Minister Ehud Barak said on Wednesday in an attempt to downplay the crisis.

Israel Has Betrayed Turkish Trust More Than Once

Still, the Turkish-Israeli relationship is worse now than it has been in a long time. Ankara remains piqued that Israeli troops marched into the Gaza Strip late last year -- just as Turkey was trying to mediate indirect peace talks between Israel and Syria. Just a few days prior to the attack, then-Israeli Prime Minister Ehud Olmert reportedly told Erdogan that no offensive was planned.

The Turkish prime minister did not hide his annoyance. At the World Economic Forum in Davos in January, Erdogan referred to the Israeli operation in the Gaza Strip as "barbaric" during a podium discussion with Israeli President Shimon Peres. He then stormed off the stage in anger, claiming the moderator had not given him as much time to speak as Peres.

Erdogan has used this argument, about "the voice of the (Turkish) people," before. And when it comes to the presence of Israeli military forces in Turkey, it is not terribly far-fetched. Particularly since the Gaza offensive, the appetite for Israeli armed forces in Turkey is minimal, even beyond religious-conservative circles. Erdogan's decision to uninvite Israel has all the characteristics of an about-face.

There is more behind Turkey's Israel policy than just Erdogan's vanity and populist tendencies. Retired Turkish General Haldun Solmazturk says that the Turkish military -- the Kemalist antipode to Erdogan's conservative-Islamic politics -- has also become increasingly dissatisfied with its Israeli counterparts. A primary cause for the distrust is the 2007 Israeli air attacks on suspected Syrian nuclear plants -- strikes flown from Turkish territory. Israel, though, says Solmazturk, never bothered to inform the Turks.

"Unreliable trade relations" when it comes to military equipment is another reason, says Solmazturk. Only two of the 10 Heron surveillance drones ordered have been delivered to Turkey, he says -- and they both crashed during test flights. Still, Solmazturk doesn't see any major reason to end the "traditional partnership" with Israel. He criticizes Erdogan's conservative-Muslim administration for adopting the wrong tone.

Under Foreign Minister Davutoglu, though, Turkey has tried to strike more of a balance between its Western allies and its Middle Eastern neighbors. Davutoglu is the spiritual godfather of a new, more multi-dimensional foreign policy for Turkey, one he hopes will make the country more influential on the world stage.

Part of that is the forging of stronger relationships with their Muslim neighbors. Davutoglu says he has "fundamental misgivings" about Israel's current foreign policy. "When these doubts are taken seriously," he says, then the peace process can be quickly re-started.

It is a position which has been well received in Syria. "We very much welcome that decision," Reuters news agency reported al-Moualem saying. "This decision is based on Turkey's approach towards Israel and reflects the way Turkey regards the Israeli attack in Gaza."

And, Syria has indicated, Turkey won't have to look long in the search for new partners with whom to conduct military exercises. After one successful maneuver conducted by Turkish and Syrian troops in April, the Syrians have indicated that another will soon follow. 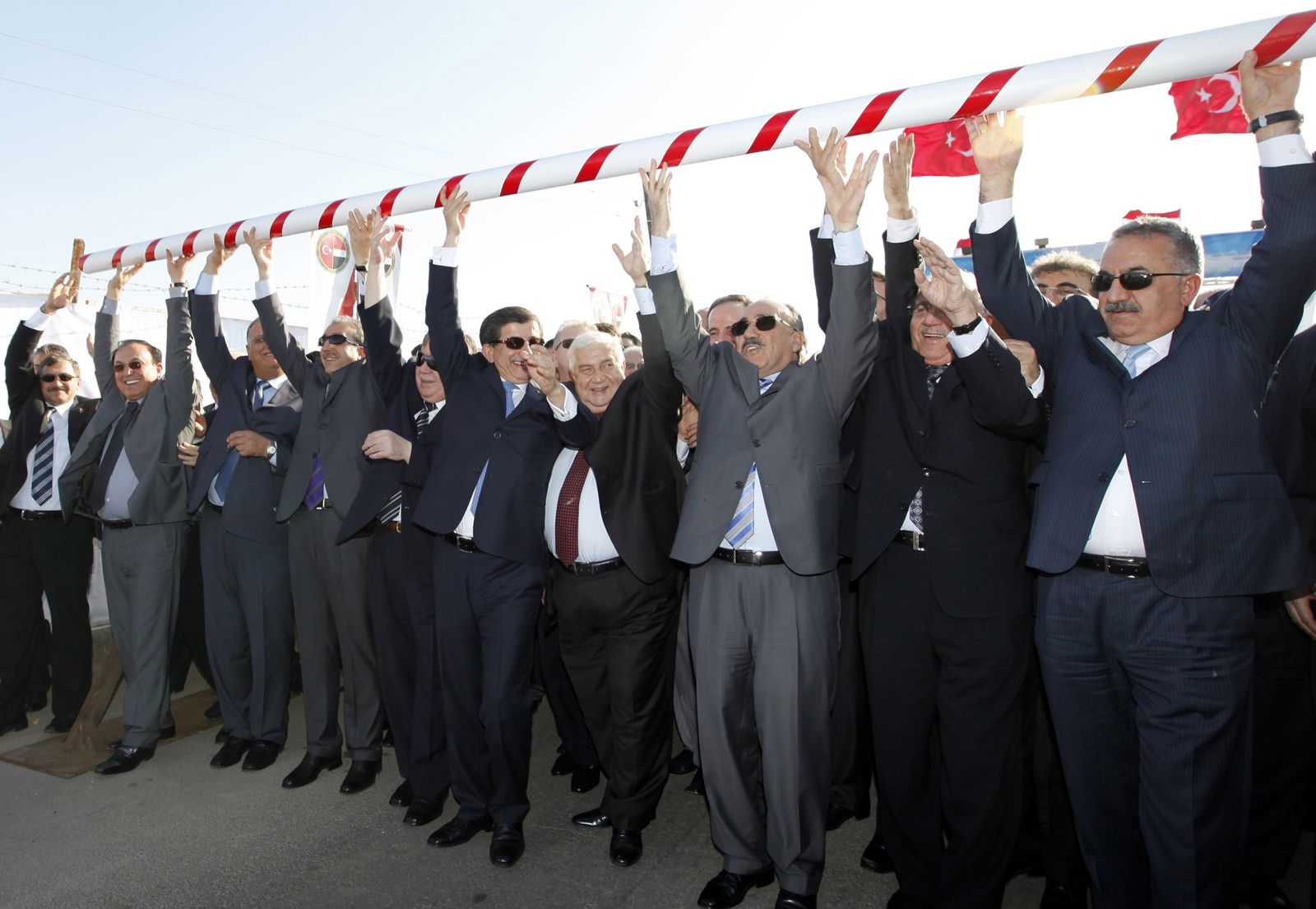 New friendships: Ministers from Turkey and Syria lift up a barrier to celebrate the visa exemption agreement between their countries last week.