A few days before Bolivia's ex-President Evo Morales fled into exile in Mexico, a group of angry townspeople stormed the city hall of a small city in the country's hinterlands. The men made their way to the office of Patricia Arce, the mayor and a member of Morales' party. They cut off her hair and sprayed her with red paint before setting the building on fire. The mob then forced Arce to walk through the town barefoot, under a hail of insults, like a prisoner of war.

The images are horrific and hard to watch, but they might just be the most vivid symbols of how the situation not only in Bolivia, but across the entire South American continent, is going off the rails.

In Bolivia, people took their anger about a supposedly rigged presidential election into the streets. Almost simultaneously, an increase in subway-ticket prices in Chile led to country-wide unrest.

After the president of Ecuador announced plans to cut, among other things, oil-price subsidies, protesters threw Molotov cocktails at government buildings. In Argentina, people likely only remained calm because the presidential election had recently taken place in October.

Each country is a unique case -- with a unique history, unique problems and unique key players. Yet these uprisings have something in common: An anger against corrupt, detached elites is forcing its way to the surface. It is an anger aimed at politicians who persistently ignore the rules and the institutions of democracy and cling to power. And it is an anger about the social inequality that is tearing many of these societies apart.

So many things are happening all at once that people aren't even bothering to vent their frustrations on social media. They're going right to the street, grabbing rocks and hurling Molotov cocktails.

Their message is this: Enough! Things can't go on like this!

The protests mark the end of a cycle. South America experienced two decades of relative stability thanks to a global boom in natural resources. In places like Bolivia, Brazil, Ecuador and Venezuela, left-wing governments financed generous social programs through income from exports. Poverty decreased. Millions of people ascended into a new middle class. Participation in globalization spurred not only a new sense of identity, but also new expectations that are turning into fears of social decline now that the boom is ebbing.

As poverty levels rise, there is a growing cross-border "sense of frustration," says the Brazilian economic scientist Monica de Bolle. The countries failed to create a safety net that could catch vulnerable citizens in times of crisis. As a result, their social progress remains precarious.

One sign of that precarity is that a three-cent rise in Chile's subway prices would have pushed many citizens into existential crisis.

Meanwhile, members of a small and increasingly prosperous upper class are leading sealed-off, luxurious lives. Their homes are monitored by private security agencies. They send their children to private schools and universities. When they get sick, they go to private hospitals.

This had made them blind to the reality on the ground. Shortly before the unrest, Chilean President Sebastian Pinera, who earned billions in the credit card industry, described his country as a "true oasis with a stable democracy."

The increasing inequality and many people's impression that their countries' wealth was not being fairly distributed was reflected in a study by the Latinobarometro polling institute last year. The pollsters found that 79 percent of Latin Americans thought their governments acted in the interest of a small number of powerful groups.

It was 18 percent more than 10 years ago, which means that most people are skeptical that democracy can still deliver on its most important promise: equal opportunities for all.

This process of alienation between the people and its elected representatives is accompanied by a dramatic decrease in respect for state institutions. Only 13 percent of Latin Americans trust the political parties, given that they have often simply been vehicles for corrupt politicians to access public funds. And only a quarter of citizens trust the courts, which generally don't punish such crimes.

Indeed, abuse and manipulation of institutions isn't tied to any political ideology.

Contempt for the Constitution

When Evo Morales held a referendum in 2016 to ask the Bolivian people whether he could run for a fourth term -- in violation of the constitution -- a majority of citizens rejected his request. So, Morales turned to the compliant courts, which deemed his renewed candidacy a human right and therefore above the constitution. Right-wingers pushed back, and with the help of the military forced the president to step down before the legally proscribed end of his time in office -- a move that tipped the country into chaos.

In Nicaragua, Daniel Ortega had the constitution rewritten so that he could be re-elected ad infinitum. In Venezuela, Nicolas Maduro had a new constituent assembly elected, though it was entirely made up of his supporters. He then declared it to be the new parliament. Democracy, it seems, is often nothing more than a facade that is maintained only as long as it delivers the desired results.

The people understand this, even if many state media portray it differently. They are turning away. It is no coincidence that in these times of anger, churches have become increasingly popular -- especially the evangelical ones with their simplistic messages. These are old Latin American reflexes, just like the yearning for a strong man who will save the fatherland.

In countries whose social center is being torn apart by increasing polarization, the pendulum is increasingly swinging far to the right.

These days, the caudillos include Brazilian hate-preacher Jair Bolsonaro, who portrays himself as a clean alternative to a political establishment that has lost its credibility via endless corruption cases. Bolsonaro, a captain in the reserve army who sat in the backbenches of parliament for 27 years, weaves together various public discourses, from a connection to god to an increased role by the military, which in the eyes of many Brazilians not only represents a guarantor for discipline and order, but also an open expression of disdain for a democratic system that could not fulfill citizens' hopes.

Bolivia has its fair share of political posturing as well. One man in particular, Luis Fernando Camacho, often waves the Bible during public appearances and had called for Morales' resignation for weeks. He is a sharp-tongued lawyer from the economically powerful eastern part of the country. His base is an amalgamation of right-wing citizens' committees, which he would ideally like to lead into a government junta together with the military.

Camacho and Bolsonaro are a new phenomenon. They owe their rise to social media. They lead professional, digital militias that take up and fuel people's anger through targeted fake news or incendiary, hate-driven campaigns. This has allowed them to create a hugely powerful vehicle for mobilizing people.

But these new populists lack the most important thing: An idea of how they can reform their fragile economic model, which is based on the exploitation of natural resources, to make it more independent from the fluctuations of global prices. Instead, they are often acting like Donald Trump's little brothers.

All of this bodes ill for the future. These protests are no South American Spring. The only thing that will be visible when the tear-gas fog lifts is chaos. The ruts dividing society will be deeper. It appears as though democracy's major contemporary crisis has now also reached Latin America. 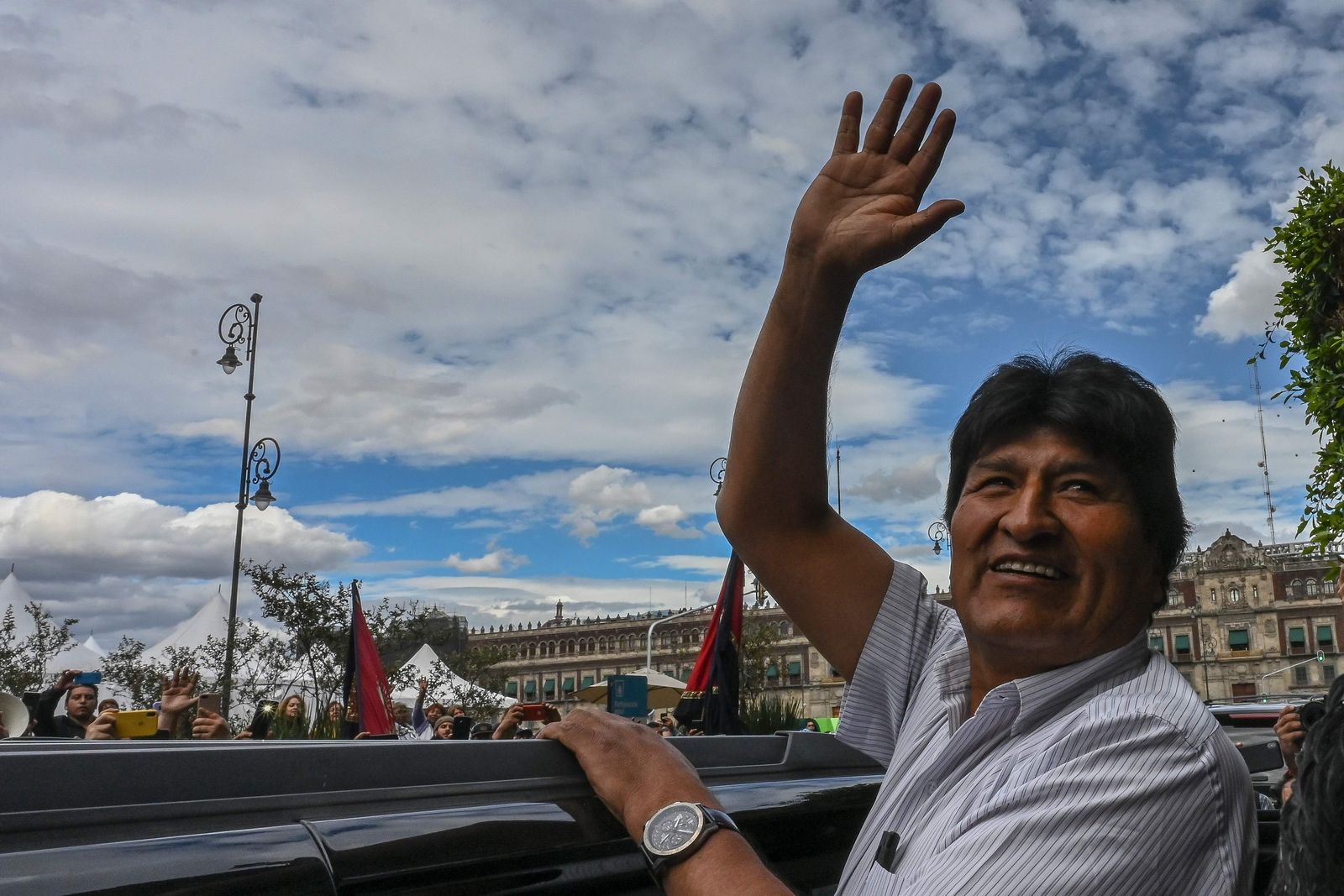 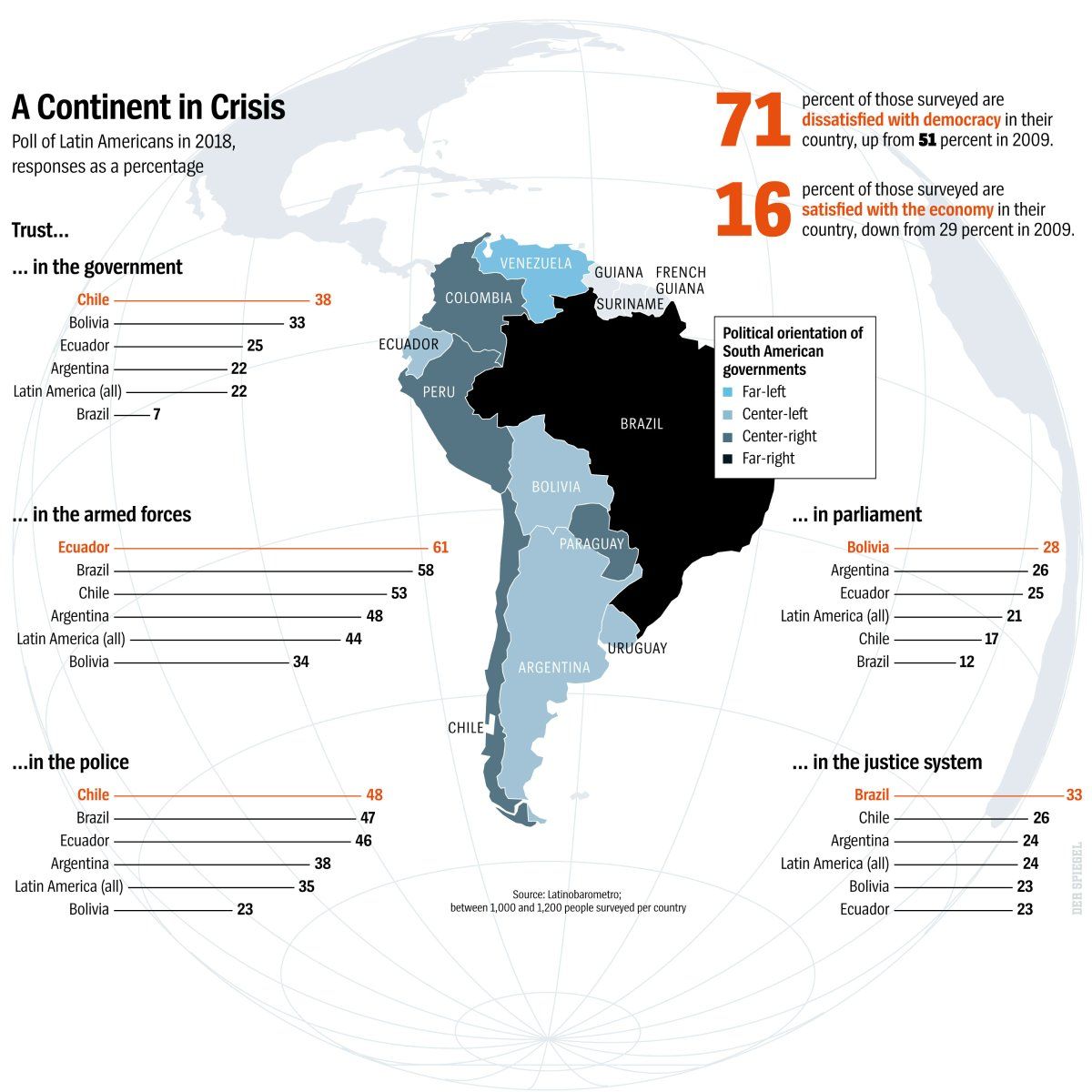