When I became the chief prosecutor for the military commissions at Guantanamo in September 2005, I arrived having heard the same stories Bush administration officials like Secretary of Defense Donald Rumsfeld had been telling the public: The Guantanamo detainees were the worst of the worst, a bunch of totally committed terrorists that were all closely connected to Osama bin Laden. I recall especially the claim a senior official made that the detainees were so vicious they would gnaw through the hydraulic lines of the airplanes carrying them to Guantanamo just to kill Americans. They painted a picture of men that were so bad you thought -- thank God they are locked away at Guantanamo.

Then I began reviewing files -- some of them like the ones that have now been published on the Internet -- and talking with people who had been involved with the case for a long time. I began to understand that, in large part, the government's narrative had been a lie and that the picture of the detainees as a homogenous group of extremists so committed to terrorism that they all had to be locked away forever was distorted.

There clearly were -- and there clearly still are -- some incredibly bad men held in detention at Guantanamo. But it was equally clear that a significant number were simply teenagers, old men, or foreigners captured walking around in Afghanistan with a Casio watch like the ones that al-Qaida handed out in its Afghan training camps -- people who did not come close to matching the label of "the worst of the worst."

While I had doubts about some of the cases, I honestly believed that the cases we would choose to prosecute, a few dozen out of a detainee population of several hundred at the time, would get full, fair and open trials. I said a number of times in comments to journalists and in other public presentations I gave that televising the trials on Court TV would be fine with me so everyone had the opportunity to watch. I believed we were committed to doing this right and, therefore, we had nothing to be ashamed of or try and hide from public view.

Proud of Our Efforts

Shortly after I became chief prosecutor, I instructed the members of the prosecution team that we would not use any evidence obtained by torture or any of the enhanced interrogation techniques they thought were unduly coercive. I told them that if they saw something that made them uncomfortable or felt morally or ethically wrong to come see me and we would talk about it. We were not going to see how far we could press the issue and get away with it. We were going to do this so someday our families would look back and be proud of our efforts.

General John Altenburg was the convening authority, the official in charge of the military commissions, when I arrived and he supported me in that decision. I had a tremendous amount of respect for General Altenburg. I was convinced that he was intent on preventing Bush administration political appointees from meddling in the military commissions and giving military law and military lawyers a bad name. Looking back, the beginning of the end for me started with General Altenburg's departure in late 2006.

The atmosphere changed within a few months of Ms. Crawford taking control of the military commissions. A new attorney joined her staff, Brigadier General Tom Hartmann, and he out-ranked me; a point he made clear again and again. General Hartmann began to question my authority to exclude evidence obtained by waterboarding or any of the other methods many call torture. He told me, "President Bush said we don't torture, and if the President says we don't, what gives you the right to say we do?"

He said the use of those interrogation methods produced good evidence and we should be using it. I asked Ms. Crawford for help, but she refused. I asked Defense Department General Counsel Jim Haynes for help, but he refused, too. The fact that Haynes wrote the memo authorizing the "enhanced interrogation techniques" should have told me, I suppose, that he was not going to find fault after those techniques were used.

The fundamental problem in the effort to prosecute detainees is that no one was sent to Guantanamo to face prosecution. They were sent there to be exploited for intelligence. At the end of World War II, when people were taken to Nürnberg, the war was over and the sole objective was to prosecute those suspected of war crimes. When detainees were sent to Guantanamo, on the other hand, the war in Afghanistan was, and still is, ongoing. The objective was to get information out of the detainees that would have intelligence value to the soldiers battling the Taliban and al-Qaida. Developing evidence to prosecute detainees for war crimes was just not a high priority.

There was real tension between the intelligence community and the law enforcement community, something I did not appreciate at first. They have different perspectives and different ways of conducting business. The intelligence community is not necessarily concerned with what you did yesterday, they want to know what you are planning to do tomorrow so that they can stop it from happening. They usually operate unseen and their rules are largely secret.

Law enforcement, on the other hand, is concerned with accountability for what you have already done, not necessarily what you are thinking about maybe doing at some point in the future. Their operations are usually more apparent and their rules are generally well known. Sometimes the intelligence and law enforcement efforts are complimentary, but at Guantanamo they were often in conflict.

Connecting Dots that Shouldn't Be Connected

Another problem was that the military was unprepared to take on the large-scale interrogation mission it inherited after 9/11. We had trained hundreds of pilots and tank drivers, but we did not have a squadron of seasoned interrogators ready to spring into operation. So we largely contracted it out to commercial companies who provided us interrogators, often young people with minimal relevant experience.

I think you can see evidence of that in the case assessments that are available to the public on the Internet: faulty logic, weak analysis, and connecting up dots that should not be connected. Some useful information was developed, but a great deal of the huge volume of information was irrelevant and in many cases it was just wrong. Unfortunately, as a result, some people that should not have been imprisoned for any longer than it took to figure out that they were not the worst of the worst, or even close to it, are still at Guantanamo nine years later.

I was aware that some of the detainees were waterboarded. That happened before I was involved with the military commissions. It was part of a CIA program, not a military one.

I know a lot of people think the military waterboarded detainees at Guantanamo -- and to this day they probably think that it is still happening -- but that was not the case and to my knowledge no one was ever waterboarded at Guantanamo. We had what I believe was complete access to information, particularly CIA information. I actually had a harder time getting information from my own colleagues in the Defense Department for some reason. And we were briefed on interrogation techniques that were used by the people who conducted the interrogations.

We had spent months assessing the information available on the high-value detainees and what parts of it we thought we could use in court. Because of the treatment they received in CIA custody and because of concern about exposing CIA personnel or the roles other countries had played, we wanted to separate the intelligence effort from the law enforcement effort to the extent we could.

In early 2007, we created so-called clean-teams made up of military and civilian law enforcement personnel that would try to interview each of the high-value detainees. It was an opportunity to explain to each detainee that he was in a new place, with new people, and under new rules. If the detainee wanted to talk, fine, but it was the detainee's choice. The sessions I observed looked like a couple of people sitting around a table having a casual conversation. At times there were smiles and laughter.

There was nothing coercive that I saw in those sessions, but the question remains whether after you cross the line can you ever walk it back to the right side. Once you ring the torture bell can you ever un-ring it? We did not know then if the clean-team effort would produce anything useful or if judges would permit it in court, but we thought we had nothing to lose if we gave it a try. That was more than four years ago and we still do not know the answer.

One case where torture clearly took place at Guantanamo is the case of Mohammed al-Qahtani, the man I believe was supposed to be the real 20th hijacker on 9/11. It was the dirtiest of the cases prior to the arrival of the high-value detainees and I was working on it personally. Once the personnel at Guantanamo realized the detainee they had in custody was the same person that had been turned away at the airport in Orlando, Florida while Mohammed Atta was waiting, they turned up the pressure to get information out of him.

Secretary Rumsfeld approved a harsh interrogation plan and over a period of weeks, Qahtani was separated from the other detainees, held in isolation in the brig, subjected to extreme temperatures, constant loud music, sleep deprivation, forced to stand nude in front of females, restrained in stress positions, threatened with rendition to a country where he would be tortured, threats to his family, and on and on. In an interview published in the Washington Post in January 2009 in the final days of the Bush administration, Ms. Crawford explained why she never sent the Qahtani case to trial. She said: "We tortured Qahtani. His treatment met the legal definition of torture."

He is still at Guantanamo. The Obama administration has completely ignored its obligation under domestic and international law to investigate and prosecute allegations of torture. Apparently we are looking forward and pretending nothing bad happened in our past.

The final moment for me was in October 2007. My dispute with General Hartmann over torture and evidence and meddling with the process reached Deputy Secretary of Defense, Gordon England, and he issued an order that said my chain of command was Hartmann and then Jim Haynes. Hartmann did not believe we tortured -- remember, President Bush said we didn't -- and Haynes had given legal approval for torture, the memo Secretary Rumsfeld signed. I read the order, saw who had command authority over me, and I resigned. 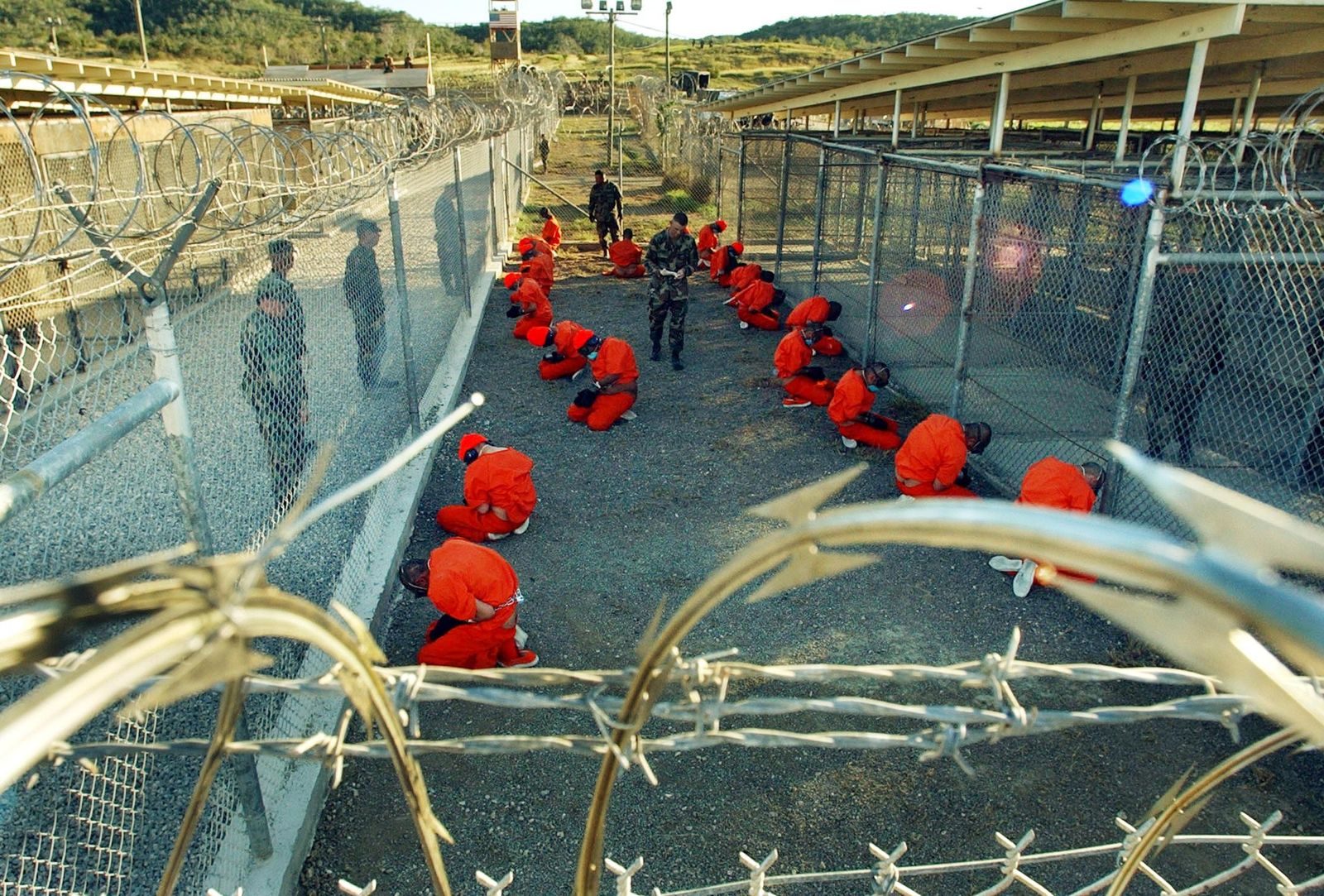