The Abdul Qahir Koran school is located just a few hundred meters from the scene of the slayings, the United Nations mission in the northern Afghan city of Mazar-e-Sharif. The massacre took place inside the building complex, which is secured with high walls. Seven UN workers were shot dead by an angry mob. "That isn't what we wanted," school master Qahir says today.

The 40-year-old teacher of the shariah is surrounded by school boys as he sits on a dark sofa. It would be hard to find another prayer leader who spewed out as much hatred during the Friday prayers of April 1 in the Blue Mosque as Qahir did. He called on all Muslims to join the fight against the infidels after American pastor Terry Jones publicly burned a copy of the Koran in Florida.

"Use every weapon, the word or the club to defend the Koran," Qahir called out. But now he disputes that account vigorously.

Ten kilometers away from Qahir's madrassa, German Major General Markus Kneip leads the ISAF troops in northern Afghanistan at Camp Marmal. The gray-haired artilleryman has served as the base commander here since 2006. Kneip is considered to be a cautious officer, one who always confers very closely with the German mission's command back in Potsdam near Berlin before making decisions. Kneip claims that he offered assistance to the Afghans before the tragedy unfolded, but says it was rejected. In an e-mail, he wrote that he was only asked for help when it was already too late.

But why, the general has been asked since then, didn't he and his troops simply deploy when the outrage over the Koran burning threatened to spiral into violence? It is this question that the Germans have so far not been able to find a good answer to.

Many Muslims consider the destruction of their holy book to be an attack on their very identity. "That is a form of racism and it leads to the clash of civilizations," said President Hamid Karzai's security advisor, Rangin Dadfar Spanta. Seldom has a catastrophe been as predictable as this one.

The protest in Mazar had been announced in advance and the ISAF troops had also been warned. An internal report by the Deployment Command of the Bundeswehr in Potsdam states: "At 4:15 p.m. local time, the command post of the North Regional Command under German leadership received the first message that the UN base had been under attack." But it was only an hour later, at 5:30 p.m. that Kneip dispatched a reconnaissance drone to fly over the UN building. By this point, it was likely that the UN workers were already dead. A German general in Berlin criticizes his comrades in Afghanistan saying, "such a drone is really just an alibi. When the United Nations needs help, you send in a team of soldiers, you go there and protect them."

Shortly before 5 p.m., the attackers broke through the door to the inner courtyard of the UN mission, tore the weapons off of four Nepalese guards and killed them. Just before that, the security guards had refused to allow Afghan police into the building to protect the workers. Four UN workers initially fled to a safe room in the basement. Pavel Ershov, the UN mission's Russian chief, saved his own life by pretending to be Muslim and reciting the traditional profession of belief in Islam.

Three female staff from Romania, Sweden and Norway reached the rooftop, but they were immediately shot and killed. The Norwegian worker's body even fell from the roof.

One German worker at the mission had the fortune of being away in a guest house at the time of the massacre.

The internal report by Germany's armed forces, the Bundeswehr, stated that General Kneip first made a unit available around 5:30 p.m. in order to "be able to quickly respond to a request from the Afghan security forces." The fact that no request was made marks the part of the catastrophe for which the Afghans are responsible.

Fears of Sending out the Wrong Message

At first it was an issue of pride. The police believed they had "everything under control." The Afghan army commander, General Zalmai Wesa, offered to investigate the matter but was then turned down by Governor Mohammed Atta Noor. General Kneip also appears to have telephoned directly with Atta.

The Germans' inappropriate hesitation appears to have been largely politically motivated. In mid-July, the Afghans are due to take over responsibility for providing security in Mazar and, in the extremely tense situation, no one wanted to impose foreign soldiers on them to help. Stefan Paris, spokesman for the German Defense Ministry, believes that a timely intervention failed to take shape because it might have "sent the wrong message."

Currently, no official complaint has been issued against the Germans. But some don't understand why. "In emergencies, on should expect that they will do something," says Thomas Ruttig, co-director of the independent Afghanistan Analysts Network in Berlin. 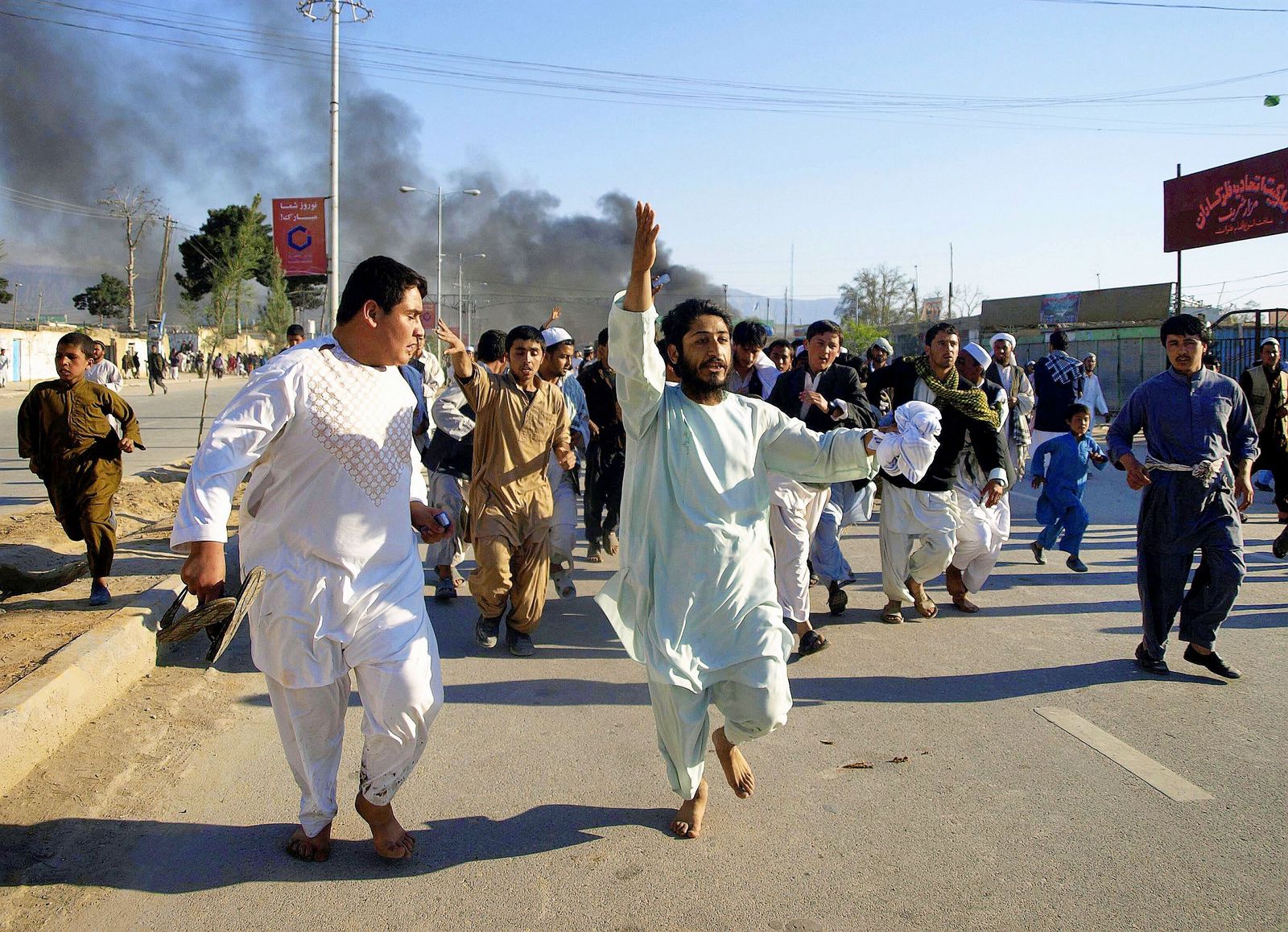 Afghan protesters at an April 1 demonstration to condemn the burning of the Koran by an American pastor: ""Use every weapon, the word or the club to defend the Koran."