SPIEGEL: Libya has been liberated from Moammar Gadhafi's autocratic rule. Tensions in Syria, meanwhile, have already claimed more civilian lives than the revolutions in Egypt and Tunisia combined, and yet the Arab League is holding back. Why are you going easy on the Syrian regime?

Elaraby: Syria isn't Libya. Libya has always been largely isolated. What happened there had little effect on neighboring countries. It's a completely different situation with Syria. The country holds a key position in the region. What happens there has a direct impact on Lebanon and Iraq. In addition, Gadhafi used heavy weapons from the start, but Assad hasn't.

SPIEGEL: Yet tanks have been deployed in Hama, Homs and Latakia for some time.

Elaraby: When I flew to Syria 10 days after taking office, they also tried to tell me that there had been no riots in Aleppo or Damascus. I was told that gun battles had only occurred in a few towns near the border, because rebels had fired on security forces there.

SPIEGEL: That, of course, is far from the truth.

Elaraby: I delivered a clear and unambiguous message to (Syrian President) Bashar Assad. I called on him to institute reforms, stop the violence and facilitate a peaceful transition into a new era.

SPIEGEL: We're hearing that for the first time.

Elaraby: It was a sensitive issue that I couldn't make public at the time. Assad promised me that he would introduce changes. But now almost two months have passed, and I don't see any reforms.

SPIEGEL: What are you asking for? Regime change?

Elaraby: That's something for the Syrian people to decide for themselves. No one can dictate to a sovereign nation how it should change.

SPIEGEL: What would have to happen for the League to take a stronger position against the Syrian regime, as it did in Libya?

Elaraby: Things are still in flux. Only the United Nations has the right to make decisions on the use of force. Even the Arab League has no mandate to bring about change by force in a member state.

SPIEGEL: Still, the Arab League has been militarily active in the past. In 1961, for example, it sent a special force to Kuwait to protect it from an imminent Iraqi invasion. Don't you need this kind of a strike force, not unlike the UN peacekeeping force?

Elaraby: Given the majorities within the League, I don't think that's realistic. But I do insist on compliance with human rights. The people, the citizens, have to be protected, and not just in Syria.

SPIEGEL: Many Arabs now feel that your institution is not very efficient.

Elaraby: The historic moment of change has gripped the entire region, and sooner or later it will change all Arab countries. The League will certainly need to adjust to that. We must be capable of reacting quickly to unexpected developments.

SPIEGEL: Surely there are a few member states, most notably Saudi Arabia, which will hardly support such changes.

Elaraby: I too have my doubts there. Nevertheless, we still have to try, and we have to take seriously the human rights established by the UN, which all countries in the League have recognized.

SPIEGEL: How does Saudi Arabia's foreign minister explain that his country supports the Syrian opposition, on the one hand, while at the same time sending troops to Bahrain?

Elaraby: I don't ask him these questions. That's your job. You're the journalists.

SPIEGEL: Do you support the Palestinian Autonomous Authority in its aspiration to have the UN General Assembly give its blessing in September to the establishment of a State of Palestine?

Elaraby: UN Resolution 181, adopted in 1947, is the birth certificate for two nations, Israel and Palestine. What's wrong with the Palestinians appealing directly to the UN after 20 years of negotiations with Israel? They could spend another 20 years negotiating without results, because the Israeli government doesn't even want to put an end to the conflict. The Israelis are only serious about gaining more land and expanding the settlements.

SPIEGEL: So you support the Palestinian initiative?

Elaraby: Support? We are doing everything in our power to back it.

Elaraby: That's an unacceptable position for us! The strongest and richest country in the world is incapable of making a commitment. Instead, someone from Tel Aviv or Jerusalem is telling them what to do.

SPIEGEL: Won't this stance lead to tensions between the Arab League and the United States?

Elaraby: I hope it doesn't come to that. If the Americans had fulfilled the promises they made many years ago and had forced the Israelis to engage in serious negotiations, the problem would have been solved already.

SPIEGEL: The German government has also announced that it will not support the Palestinians' plan.

Elaraby: Has Israel recognized Hamas? That sort of thing is based on reciprocity.

SPIEGEL: But the Islamists in the Gaza Strip are the ones firing rockets at Israeli cities.

Elaraby: That shouldn't be happening. It's wrong, and we do say that to them. Palestinian President Mahmoud Abbas constantly implores them to stop condoning the firing of rockets. The fact is that there are extremists on both sides.

SPIEGEL: Will there ever be another war between an Arab country and Israel over Palestine?

Elaraby: Completely out of the question.

SPIEGEL: You took the position of secretary-general two months ago, during a turbulent time. Do you think it's possible that you will resign if the pressure becomes unbearable?

Elaraby: Yes, absolutely. It's in my nature. Indeed, I'm not sure that I can stand it much longer. 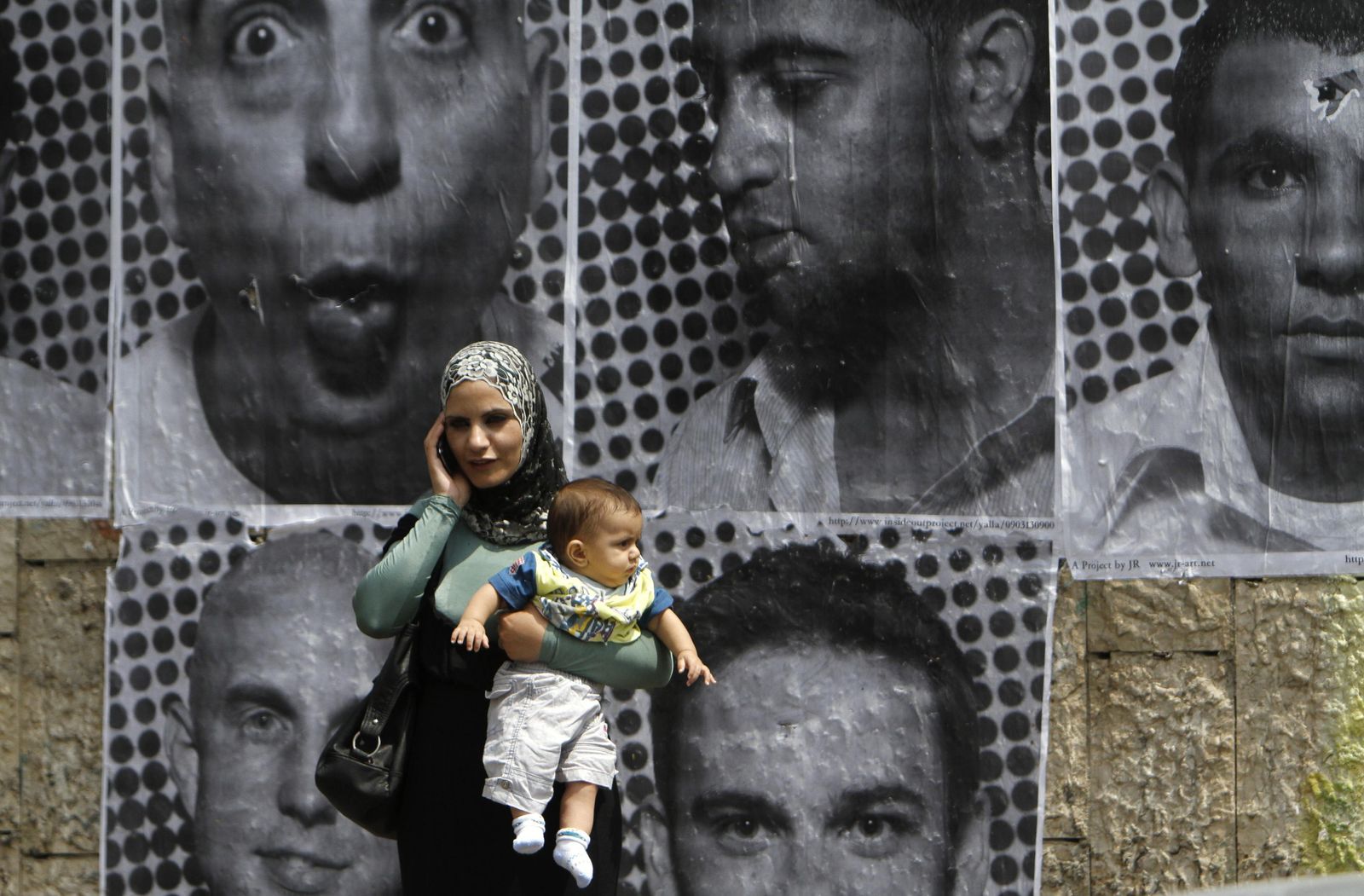 A woman standing in front of portraits of Palestinians in Ramallah, part of a project by French street artist JR.