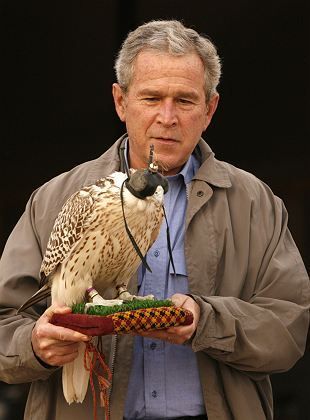 US President George W. Bush: "Unfortunately, the focus of this epoch-making visit to Abu Dhabi and Dubai has been on the US preoccupation with Iran."

He came bearing gifts. His adminstration informed Congress on Monday that it intended to sell Saudi Arabia $20 billion worth of arms. His message, though, has focused consistently on the need for piece between Israelis and Palestinians and on the dangers posed to the region by Iran.

It was the latter message that commentators in a number of papers in the region chose to focus on.

"This black caricature of George W. Bush in (Bahrain capital city) Manama is a fitting conclusion to the Arab tragedy. It's an absurd, sadistic image: the sheikh of Bahrain welcoming his exceptional guest with  a golden sword -- the symbol of loyalty and submission, meaning: "Bleed me white my lord, if my death pleases you!"

"The explicit aim of the lame duck visit to the region is to foster hatred for Iran among Arab countries ... and to urge them to stand together with Israel against what the American president calls 'terrorism' -- as if there was anything more dangerous for the region than Israeli terrorism. A responsible Arab delivered the necessary response. Prince Saud al-Faisal of Saudi Arabia insisted that 'Iran will always remain a friend, a partner and a neighbor for the Arab region.'"

"George W Bush's visit to the United Arab Emirates is a watershed event in every sense of the term. This is the first visit by a United States president to the country, despite the close historical and strategic relations the two countries have always enjoyed."

"Unfortunately, the focus of this epoch-making visit to Abu Dhabi and Dubai has been on the US preoccupation with Iran, rather than America's strong and healthy relations with the UAE and other Gulf allies."

"Just as the Gulf countries have healthy relations with the West, including the US, they also have historical, cultural and economic ties with Iran. The UAE happens to be Iran's biggest trading partner. This is why the UAE and other Gulf countries wouldn't want any more confrontation and conflict between the US and Iran. The Middle East and Gulf region, already suffering from two conflicts, cannot afford any more tensions. Peace and only peace is the way forward."

"This is a new chapter in the series of lies that has characterized the Bush administration. He wants us to believe that he seeks peace and that Iran, and not Israel, is the danger. America does not want peace for the Arabs, but rather their surrender. It doesn't seek democracy but the control of the whole region. And it doesn't want to confront Iran for the sake of the Arabs -- it does so for Israel's sake. Neither is Bush seeking stability for the region -- he just looks for stability for Israel. But he would be better advised to pressure Israel to help prevent a nuclear arms race in the region rather than asking Arab countries to confront Iran over the development of its civilian nuclear program."

"The positions Bush expressed in interviews with major Israeli television channels and newspapers last Friday are even more shocking than Israeli actions on the eve of his visit. They mark a clear regression from the stances Bush declared in his opening speech at the Annapolis meeting. In most interviews, Bush said he no longer thought it was possible for an agreement to be reached on establishing a Palestinian state before the end of 2008 and that the most that could be hoped for was an 'agreement on the definition of the Palestinian state,' leading Aluf Benn, a political commentator with Haaretz newspaper, to write that 'it appears Bush's vision has shrunk from trying to establish a Palestinian state to merely formulating a definition of it for inclusion in the dictionary.'"

"The mechanism Bush suggested for resolving the difference between the Palestinian Authority (PA) and Israel over the settlement issue is highly problematic -- he had proposed setting up a committee with American leadership to supervise the implementation of the first stage of the roadmap, whereby Israel is obliged to freeze settlement and the PA is obliged to quell and disarm the Palestinian resistance movements and halt incitement against Israel. Bush does not, however, object to the Israeli position that freezing settlement building can only take place after the PA fulfils its obligations, which means that implementation of this stage might continue forever."