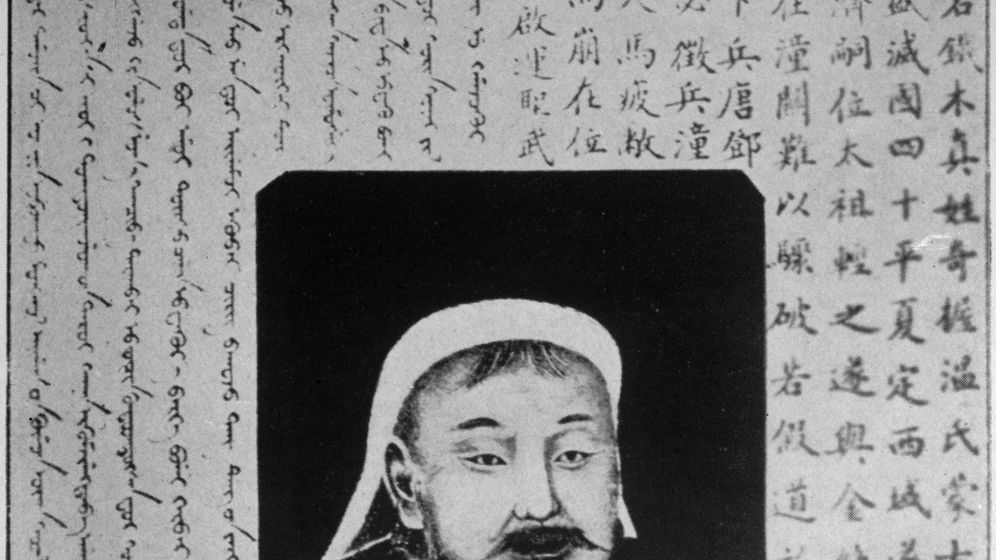 His end didn't begin heroically. The Mongolian ruler simply fell off his horse. His hands and legs must have lost their strength. It was an embarrassing incident from which Genghis Khan never recovered.

Shortly thereafter, a procession of slaves and warriors escorted the ruler's body, wrapped in a white felt blanket, to its final resting place. Slivers of fragrant sandalwood were placed in the grave to prevent insects from gnawing at the body of the Great Khan.

But where exactly did the subjects bury the body of this tyrant, who is still revered by Mongolians today? Over the past century, scores of adventurers and archaeologists have searched in vain for Genghis Khan's grave.

Today, expeditions with high-tech equipment are racing to make the find. Not surprisingly, Mongolians claim their national hero's grave is located within the borders of their own country. A Russian historian, though, claims to have discerned from old sources that the nomadic leader was buried near the Mongolian border -- but on the Russian side, in the Republic of Tuva.

Meanwhile, Chinese researchers have sent an expedition to the foothills of the Altai Mountains, with the assumption this is where Genghis Khan was buried after he died during his last military campaign against the Tangut, in modern-day northern China.

The surly old Mongolian would have probably found pleasure in knowing that, nearly 800 years after his death, hordes of archaeologists are still wandering the steppes and deserts in search of his final remains. And it's certainly no coincidence that the search has proven so difficult.

According to one legend, Genghis Khan's underlings were given strict orders to eliminate all evidence that could lead to the spot where the ruler was rather humbly laid to rest. His loyal followers allegedly planted a grove of trees over his tomb, then Mongolian soldiers slaughtered the slaves who had dug the grave. After they returned home, these warriors were subsequently massacred by their own military comrades so no one could divulge even the slightest clue.

The most recent attempt to track down the Mongolian's tomb has been launched by 30-year-old Albert Lin from the University of California, San Diego. Pictures show the young, American scholar galloping on horseback across the magnificent Mongolian grasslands and posing in his adventure garb.

But despite what these images suggest, Lin isn't planning on using a pickax and a spade to dig up the earthly remains of the fabled Mongolian. The researcher is using radar and high-resolution satellite imagery to comb through the area around the holy mountain of Burkhan Khaldun, in the Khentii range in northern Mongolia -- where he believes Genghis Khan's grave is located.

The use of such high-tech equipment in the field is a novelty for technophile researchers. But in this case, veteran archaeologists doubt modern gadgetry will lead to the desired results.

"I can't imagine how this could produce convincing proof. Simply finding a large burial complex in the Khentii region doesn't mean this is actually Genghis Khan's grave," says Hans-Georg Hüttel, who has been directing one of the most prominent excavation projects in Mongolia for many years.

Christina Franken, who is currently doing excavations in the medieval city of Karabalgasun, built by the nomadic Uighur people, sees the search for the grave as a "sensational treasure hunt."

This opinion may also be fueled by a dash of frustration. Indeed, virtually unbeknownst to the general public, German and Mongolian archaeologists have made a sensational discovery 320 kilometers (200 miles) west of the capital Ulan Bator, where they have apparently found the remnants of the palace that Ögödei Khan built in the middle of the steppes.

Tragically for the researchers, hardly anyone has ever heard of Ögödei Khan.

This relatively unknown ruler wasn't even designated to ascend to the throne -- and his rise to power sheds light on the tangled circumstances of one of the most fascinating imperial dynasties of the Middle Ages.

As Genghis Khan's third son, Ögödei was not a prime candidate to succeed his father. This privilege was reserved for the firstborn son, Jochi. But while Genghis was exceedingly brutal and unscrupulous with his opponents, he was something of a pushover as a father.

Jochi and Chagatai clashed so violently over the planned succession that they tussled on the carpet of the Great Kahn's felt yurt, pummeling each other with their fists, while their father, the great warlord, pleaded with them to stop.

This episode ultimately led a man who, by the today's medical standards, could easily be described as a hardcore alcoholic, to become the ruler of the Mongolian Empire. Compared to his father's fiery temperament, though, Ögödei was a rather gentle soul.

Historians see the youngest son as an ingenious reformer. He introduced paper currency and even established a postal system. But Ögödei's greatest accomplishment was building a city on the steppes that could be used to administrate his ostensibly ungovernable kingdom of nomads.

The idea dates back to his father, Genghis -- who, opulent marauder that he was, preferred to continue spending his nights in the familiar shelter of traditional Mongolian tents. In the steppes of the fertile Orkhon Valley, archaeologists have found the stony remains of the famed settlement of Karakorum, which Marco Polo mentioned in his travel accounts.

By all appearances, Ögödei envisioned the satellite town as a multicultural city right from the start. "There was a Muslim and Chinese quarter here, Buddhist temples and mosques, and even a Christian church," says Hüttel, the archaeologist.

Thanks to geomagnetic surveys, researchers have discovered that the northwestern part of the city had no permanent buildings. This was presumably an early sort of camping ground, where the Mongolian city-dwellers pitched their tents. The tent residents weren't driven to pursue a trade or work in the fields -- two activities that help develop a fledgling community. Instead, the nomads-turned-city-dwellers into a leadership clique that surrounded the ruler of the city, Ögödei.

The plan to build a city in the middle of nowhere was, of course, almost absurdly ambitious. Archaeologists have found the remains of large cottage industry workshops on the banks of the Orkhon River, all built by order of the ruling Khan. Agriculture and animal husbandry were also energetically pursued on the fertile pastures surrounding Karakorum. But these initiatives were far from enough to feed the city. The Mongolian ruling elite had to bring 500 ox carts filled with food from China every day in order to keep the project from rapidly turning into a fiasco.

Experts now agree that Ögödei was at least as important as his father. With his marauding campaigns of conquest, Gengis Khan had created the vast Mongolian Empire, which extended all the way to Europe, yet it was Ögödei who first succeeded in stabilizing this complex political entity by establishing a central administration. Hüttel says: "Without Ögödei, today's Mongolia would not exist."

His father may have risked his health by riding recklessly on his conquests, but Ögödei cultivated an entirely different vulnerability: He lived the high life and manically squandered his wealth. A few years before his death in 1241, the Mongolian ruler was bankrupt.