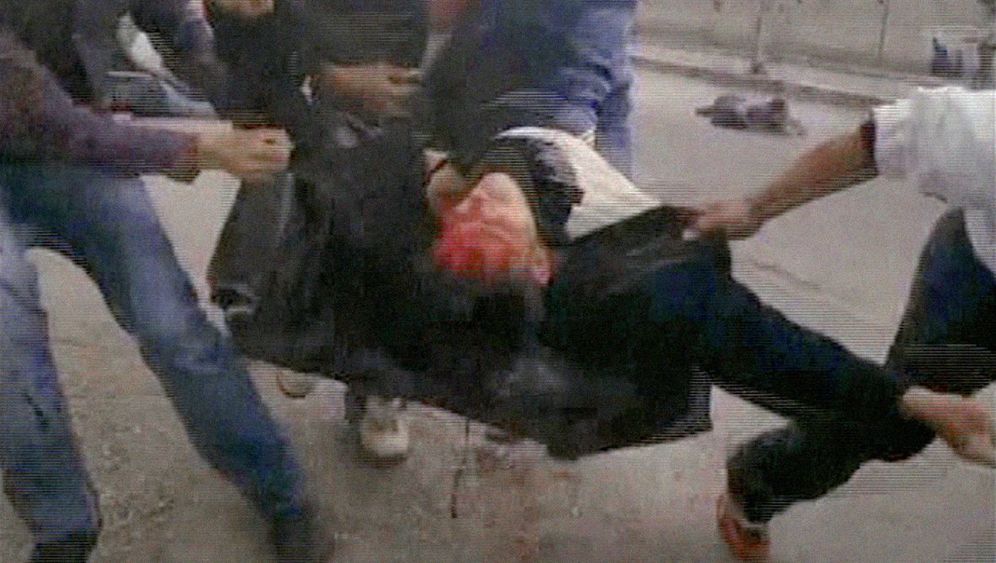 Of course he wants to talk about what is happening in Homs, where he lives. But it's complicated. He has to keep himself hidden and conceal his intentions, the man says hoarsely on the phone, because he is being watched. "Call me Abu Kamil. I'm about 60 years old."

Abu Kamil was at the large demonstrations in Homs last week, as were tens of thousands of other people -- including a friend of his who was shot in the head and is now at home. "I can't take him to the hospital," says Abu Kamil. "Anyone who is brought to the hospital with a bullet wound will be arrested."

Instead, he called a doctor he trusts. The doctor said that the friend needed surgery, but explained that could only be done in the hospital. "Now he'll die at home," Abu Kamil says quietly.

Heba, 37, also attended the protest, spending 12 hours on the square. "The mood was friendly at first," she says. "We did not expect the security forces to attack us so brutally."

On the next morning Heba, a mother of three children, wanted to go the hospital to donate blood for the wounded. "But the police had blocked off the hospital," she says. "They were literally waiting for the wounded so that they could arrest them." Doctors complained that the 25 people who died on that day could not be identified, because their relatives did not contact them.

"The parents of people who were shot to death were forced to go on television and state that their children were radical Islamists," says Heba. "That's why no one is coming forward anymore."

The Arab revolution reached Syria unexpectedly late -- and the regime is striking back with unexpected brutality. More than 80 people died on April 22 alone, a casualty figure not seen in the region since the bloodiest days in Baghdad. Human rights activists have counted over 550 people dead since the unrest began about six weeks ago. They are painstakingly examining the trickle of information still coming from cities like Daraa, Latakia, Banias and Homs.

Just on Sunday, 10 people were killed by security forces in Daraa and almost 500 arrested in house-to-house raids, according to an army spokesman. Syrian tanks shelled the old quarter of Daraa on Sunday, which has been under siege since Monday of last week. On Tuesday, a leading Syrian human rights activist told the Associated Press that authorities had arrested over 1,000 people in raids since Saturday.

Not even Libyan dictator Moammar Gadhafi has sealed off his country from the international media quite as thoroughly as Syrian President Bashar Assad, a supposedly modern-minded ophthalmologist who has ruled Syria as a police state for the last 11 years. The wall of silence lends credibility to the accounts of the activists communicating via Skype and Facebook, who ask: If the regime has nothing to hide, why is it hiding?

Reports by independent observers have become rare. One of them has been given by Günter Gloser, a member of the German parliament for the center-left Social Democrats and a former senior Foreign Ministry official. He returned to Germany from a trip to Syria last Wednesday. According to Gloser, intelligence agents are everywhere, and there are roadside checks on the edges of restive neighborhoods like Duma in northeast Damascus.

But the country did not feel like it was in an all-out civil war, Gloser said. "The center of the capital was still quiet, and so was Aleppo, another major city," he said, adding that pictures of Assad were on display in many places there. "Assad is not equally hated by everyone. Many Christians, for example, view the possible demise of the regime with concern."

Based on his conversations with people in Syria, Gloser concludes: "We cannot close our eyes to what is happening in Syria. The West should announce sanctions." But simply saying Assad must go, as in the case of Gadhafi, doesn't do much good, Gloser believes. "He should be given a chance to implement the reforms he has announced."

British Foreign Minister William Hogue said the same thing last week (before uninviting the Syrian ambassador from the royal wedding), noting that it was "not too late" for Assad to implement reforms. Even US Secretary of State Hillary Clinton was still defending Assad in late March against comparisons with his notorious father, Hafez Assad. A German government spokesman was just as ambiguous when he referred to the Assad government as a "brutally oppressive regime," while at the same time warning against cutting off ties altogether.

Russia's and China's decision to block a United Nations resolution against Damascus may be a result of their economic interests in Syria. But there is a fundamental reason why the Europeans and Americans will be unwilling to go beyond the sanctions announced on Friday: Syria may be much smaller than Egypt, have less oil than Libya and be farther away from Europe than Tunisia -- but its importance in terms of stability in the Middle East is enormous.

The events of last week alone show how almost all lines of conflict in the region come together in Damascus. Last Wednesday, the two warring Palestinian factions, Hamas and Fatah, made the surprising announcement that they intended to pursue reconciliation. This is partly because the Hamas leadership doesn't know how much longer it can hold on in Damascus, where it enjoys Assad's protection. The agreement between Hamas and Fatah puts pressure on Israel, because the reconciliation brings the Palestinians closer to their goal of achieving recognition for a Palestinian state by the United Nations.

On Thursday, Yukiya Amano, the head of the International Atomic Energy Agency (IAEA), announced that a complex of buildings on the Euphrates River in Syria which the Israeli Air Force bombed in 2007 was indeed a nuclear reactor under construction. This show how strong the Syria-Iran axis already is, and how far along Damascus was in developing its own nuclear program.

Also on Thursday, Egypt announced that it was normalizing its relations with Iran, a country that has had only one Arab ally until now: Syria. Cairo also plans to open its borders to the Gaza Strip, which will weaken Israeli control over the area. It is clear that Egypt is beginning to play a new diplomatic role that will no longer necessarily take the interests of the United States and other Western countries into account. It's a role that could change the entire balance of the Middle East.

'The Assads Run Syria as a Family Business'

How will this affect the Assad regime and its alliances? Damascus supports the radical Islamic group Hezbollah, the key political force in Lebanon, but the Iraqi leadership also has very close ties to Damascus, where Iraqi Prime Minister Nouri al-Maliki lived in exile for several years. Saudi Arabia's princes are looking to Syria with concern, because many of them own weekend homes there. The Israeli military is also worried, because they cannot be sure how much longer the cease-fire in the Golan Heights, in effect since 1973, will last.

For years, Bashar Assad threatened the West with chaos if it attempted to bring about regime change in Damascus. Now the possibility of his ouster has indeed triggered uncertainty, at least temporarily.

Governments in the West have long known who they are dealing with in Syria. Diplomatic cables from the US Embassy in Damascus, which were leaked to the whistleblowing website WikiLeaks last year, paint a picture of a power elite so shameless that the fury of the protesters makes immediate sense. But they also raise the question of why it didn't erupt in January, when the first Arab regime fell, in Tunis.

"The Assads run Syria as a family business," reads a classified diplomatic cable from 2006. The country, according to the cable, was "dominated by a 'corrupt class' who use their personal ties to members of the Assad family and the Syrian security services to gain monopolistic control over most sectors of the economy, while enriching themselves and their regime benefactors."

'The Poster Boy of Corruption'

The Americans describe Bashar's cousin Rami Makhlouf as "the poster boy of corruption in Syria." According to the diplomatic cables, his family has built "a vast financial empire," with Makhlouf exploiting his connections to his cousin, the president, and squeezing out his competitors, for example in the case of a power-plant construction project worth €430 million ($632 million). "Having previously obtained exclusive rights to represent Siemens, Rami profited again when additional power infrastructure projects were awarded to the German company," reads an embassy cable from January 2008.

According to one of the cables, the president uses four confidants to "make and move money." One of them is apparently Makhlouf's father Mohammed, who is Assad's uncle. "If Rami is the face of corruption, Mohammad is the brain," reads the cable. A US report on a case that happened in the summer of 2008 indicates the sums of money involved, even among marginal figures in Assad's circles. A security adviser to the president had been shot, and when the police searched his house, they found $80 million -- in cash.

It should be noted that the US State Department has had this information for years. Nevertheless, Washington continued to favor the Assad regime. The Europeans were also aware of the clan's shady dealings. Rami Makhlouf, for example, was once a guest of the Berlin-based German-Arab Association. Nevertheless, the West has counted on the Assads until now, and is having a tough time separating itself from a dynasty that was a relatively predictable force in the Middle East for 40 years.

But the more blood that is shed in Homs, Daraa and Latakia, the more imminent is the fall of the House of Assad. And unless the regime changes course drastically, the remaining lifespan of the government will probably be measured in weeks rather than months or years.

'A Beacon of Culture and Secularism'

As recently as February, when former Tunisian President Zine El Abidine Ben Ali was already in exile and Egyptian President Hosni Mubarak had been deposed, the magazine Vogue published a profile of Assad's wife Asma. One of the world's top photographers had traveled to Damascus to photograph the Syrian first lady, a woman who, according to the magazine, "is on a mission to create a beacon of culture and secularism in a powder-keg region -- and to put a modern face on her husband's regime."

Eight weeks later, a paragraph at the end of the Vogue story, in which Asma's husband joins the conversation, appears to take on a whole new meaning. When asked why he became an eye surgeon before embarking on his political career, Assad replied: "Because it's very precise, it's almost never an emergency, and there is very little blood." 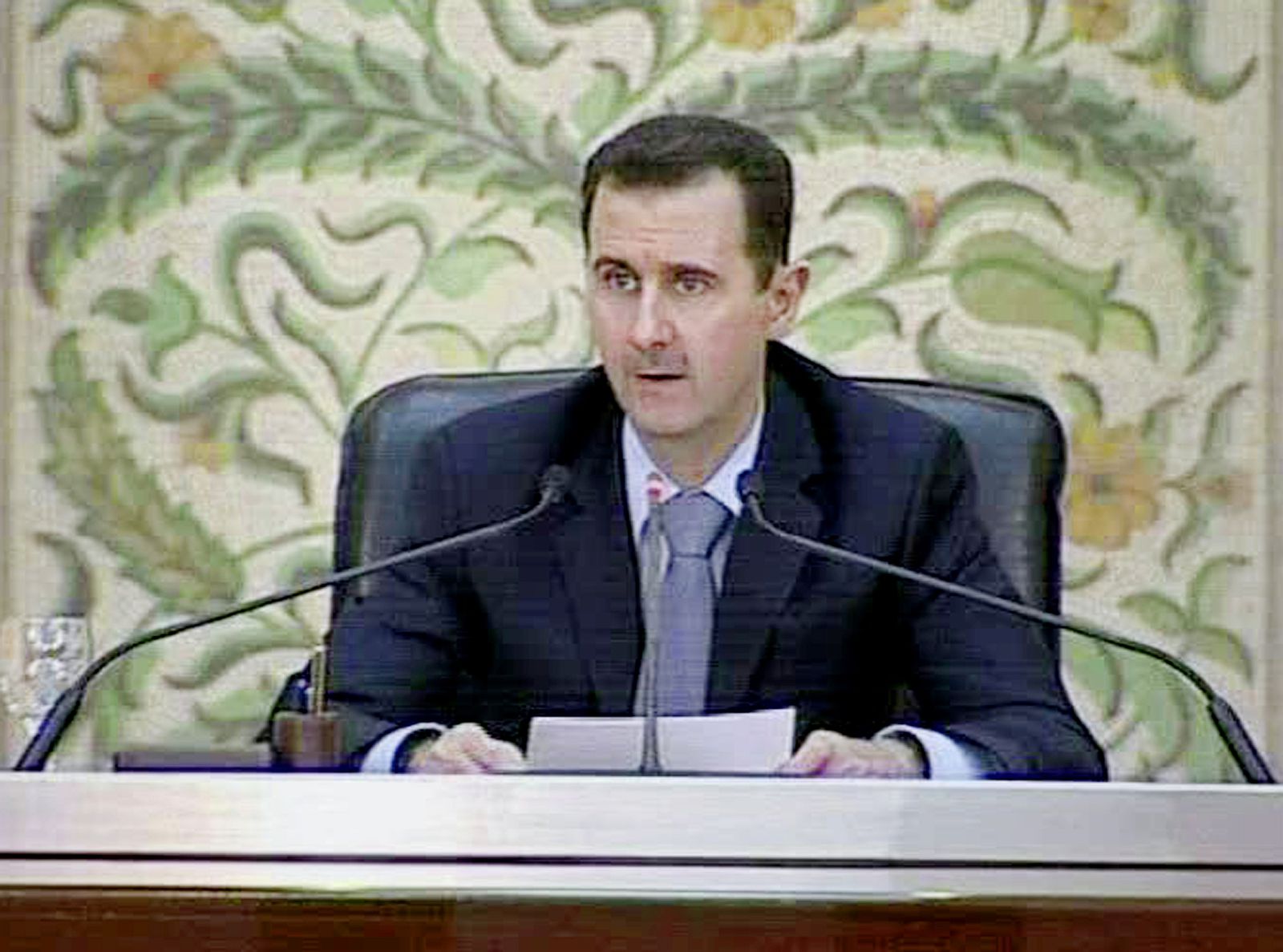 President Bashar Assad. The country's neighbors are greatly concerned about the future of the strategically important state.