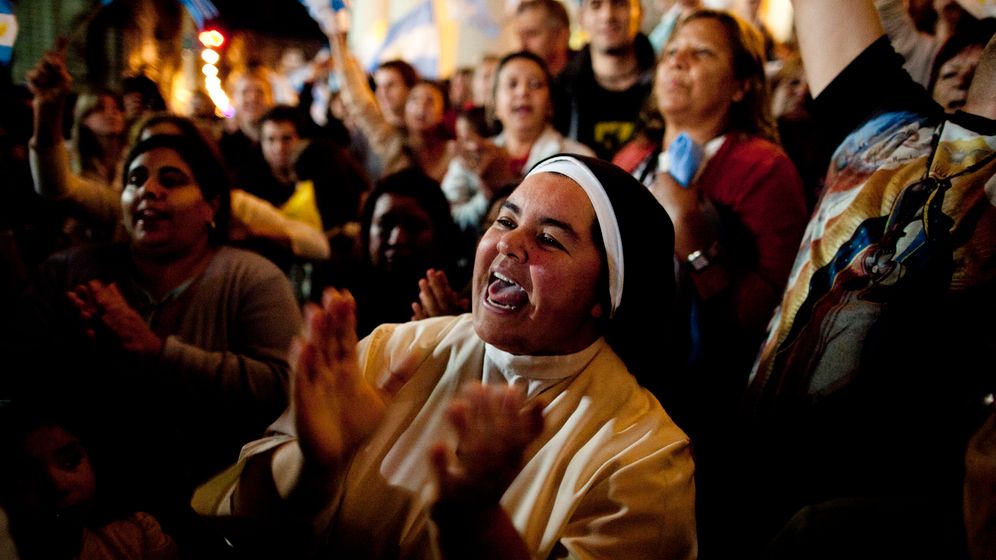 It was a good thing the pope wasn't chosen on Tuesday evening, the first night of the conclave. During that day in Buenos Aires, the city's main cathedral, Metropolitana, was surrounded by an angry mob protesting recent funding cuts made to public schools in the city. The cathedral was the target of their anger because private schools, many of them run by the Catholic Church, were to get more state money as part of the reform. Indeed, the city's cardinal, Jorge Mario Bergoglio, even intervened with the mayor of Buenos Aires, suggesting that perhaps the money earmarked for private schools should be sent to public institutions instead.

It was one of Bergoglio's final acts as cardinal. On Wednesday evening, he was chosen by the 115 cardinals gathered in the Sistine Chapel at the Vatican to become the successor to Pope Benedict XVI.

Cardinal Bergoglio was transformed into Pope Francis . And the square in front of the cathedral was transformed from a sea of anger on Tuesday to a scene of tumultuous joy on Wednesday, as the faithful gathered to celebrate. A light rain was falling and the temperature stood at just 20 degrees Celsius (68 degrees Fahrenheit), unusually brisk for a summer day, but that didn't stop Argentines from celebrating the first ever Latin American pope.

Many of those who streamed into the cathedral were waving Argentinean flags, while others held the Vatican banner aloft. Singing echoed through the building as though it were a football stadium: "Olé, olé, Francisco, Francisco!" It might not rhyme, but nobody seemed to care. Ultimately, the crowd swelled to the point that the street outside was closed as the church bells rang without pause. At 7 p.m. local time, a huge mass was celebrated in the cathedral.

A Child of Buenos Aires

The worshippers were deeply moved, almost as though they had known Cardinal Bergoglio personally. For many, that was no doubt true. A Jesuit, Bergoglio is seen as a simple and modest Catholic leader, one who was occasionally seen riding the subway. The fact that he is the son of financially insecure Italian immigrants only serves to strengthen the impression. Just a few minutes after his election was made public, a friend of his appeared on Argentine television to talk about the childhood they shared together. Bergoglio came across as just another child of Buenos Aires.

It was clear that those celebrating on Wednesday night were cheering Bergoglio not just as a Catholic leader, but also as a representative of their country. His genial manner of speaking -- which was on display during his first papal address on St. Peter's Square -- is a key element of his popularity back home. And one comment he made from the balcony of St. Peter's Basilica after being introduced to the world was constantly repeated in Buenos Aires on Wednesday: "My brother cardinals have gone almost to the ends of the earth to get (the next pope)." The comment quickly became a headline for Argentine newspapers and T-shirts were also immediately available online with the slogan "I come from the end of the earth."

One Argentine, however, seemed not entirely pleased with the choice: President Cristina Fernández de Kirchner. As cardinal, Bergoglio repeatedly criticized her leadership, to the point that she avoided coming to services in his cathedral. When the big news arrived from the Vatican on Wednesday, Fernández de Kirchner's Twitter account exploded with tweets, but they were all about a new natural gas pipeline in Patagonia. Only hours after Pope Francis was presented to the world did the presidential palace release a congratulatory statement. It was formal and respectful -- and cold. Later, the president appeared on state television to announce the handover of new homes for the poor. Only toward the end of the program did she mention the new pope, requesting that he encourage global powers to engage in dialogue -- a clear reference to the ongoing conflict with Great Britain over the Falkland Islands. Next up on state TV? A football match.

It was a noticeably reserved reaction in comparison with the patriotic fervor on display elsewhere. The choice of Bergoglio, after all, came as a shock. Few seriously thought that an Argentine, and a Jesuit, had a serious chance at the papacy.

Yet it shouldn't have come as such a great surprise, commentators around the world said on Wednesday evening, though few had Bergoglio on their list of favorites prior to his election. Bergoglio, they now pointed out, was Joseph Ratzinger's most serious competitor during the last conclave in 2005. He ultimately withdrew his candidacy "almost in tears," paving the way for Ratzinger to become Pope Benedict XVI. Now that Bergoglio has become Ratzinger's successor, the media has been rushing to point out how predictable it all was.

For the observant, there were other signs. The new pope is an avid football fan, a supporter of the Buenos Aires team San Lorenzo (from the neighborhood of Almagro, not far from where Bergoglio was born). His father, a railway worker, is said to have taken him to the stadium regularly. One of the team's nicknames is "Santos," or "Saints." And if that weren't enough, the team was almost relegated to the second league last season, but managed to avoid the fate at the last moment. Clearly a sign from the heavens.

And it works both ways. In Argentina, Diego Maradona is worshipped as a god. Lionel Messi is seen as the Messiah. But the country had been missing a pope, until now. Surely the football World Cup is now theirs in 2014, the Argentines say. Saint Francis will make sure of it.