Twenty men meet in a backroom in the Argentinian provincial capital La Plata every Tuesday evening. They greet each other with kisses on the cheek and hug as if they hadnt seen each other in years. Then they sit down around a long table, set with dishes made of tin. The meals are simple -- pasta mostly, with cheap wine and lemonade.

None of the men ever forget the weekly dinner. Its been their ritual for more than 20 years. Their experiences in the Falklands War unite them. They fought together on the Malvinas -- as the archipelago in the southern Atlantic is called in Latin America.

Dug into muddy trenches, they fought over every rotting biscuit. They secretly stole sheep from the islanders and, unable to make a fire -- it was wartime, after all -- they devoured the meat raw. "The months on the islands have marked us for life," says 45-year-old Norberto Santos.

Argentinas dispute with Britain over the Malvinas continues to this day. On the eve of the anniversary of the war Argentina suspended a cooperation agreement with London on oil exploration around the islands, announcing that such cooperation could only continue if Britain agreed to "renew dialogue over sovereignty."

Stocky Norberto Santos weighed 86 kilograms (190 lbs.) when he was sent to the Malvinas on April 8, 1982. He was 18 years old, had just completed his military service and was studying economics. "Our superiors told us it was a kind of excursion. No one expected war," he remembers. Two months later he was just skin and bones. His officers were hoarding the supplies arriving from the mainland. Those caught begging or stealing sheep were pegged to the ground and exposed to the icy cold for days.

"Our own officers were our greatest enemies," says 44-year-old Ernesto Alonso. They supplied themselves with whiskey from the pubs, but they werent prepared for war. "They disappeared when things got serious." Many of the officers had previously worked as torturers for the Argentianian dictatorship. "They used us recruits for their sadist phantasies," Alonso says.

Twenty-five years later, the veterans are trying to take their tormentors to court. "Argentina has come to terms with the dictatorship's human rights violations," says Alonso, "but the crimes commited during the Malvinas War are still taboo. The country owes us."

Only the top echelons of the ruling junta -- General Leopoldo Galtieri and the high command of the navy and the air force -- were convicted of war crimes. The recurits were locked inside a barracks in Buenos Aires for a few days following their return from the war, and they were sworn to secrecy. Many pressed charges against the officers who had abused them but the relevant documents are classified, buried deep in the militarys archives.

Nor is there much photographic or video footage documenting the misery of the soldiers. The footage produced by the militarys camera men is reported missing and journalists and civilians were not granted access to the remote islands. "Malvinas was a war without images," says Alonso. 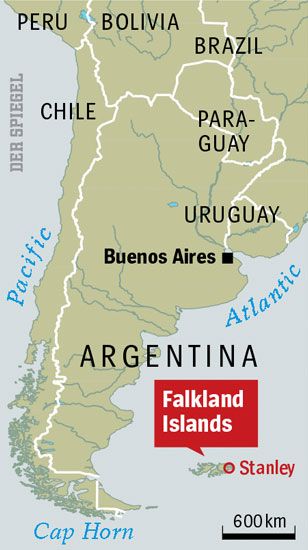 The ownership of the Falkland Islands, a British dependency in the southern Atlantic, has long been disputed by Argentina.

Only a feature film produced two years ago -- "Iluminados por el fuego" ("Lit by Fire") -- portrays the recruits' story. Some of them worked as advisors to director Tristán Bauer on the set. The veterans of La Plata could live through their days in the mud and trenches one more time in the cinema.

Santos lost his left arm during a bombing raid: "The cold saved me. It prevented the stump from getting infected." Another soldier fired a bullet into his chest to put him out of his misery, but he survived the mercy shot. He spent two years in a Patagonian hospital before he was able to return home.

Forty-four-year-old Gabriel Sagasfume lost the soles of his feet to frostbite in the trenches: The military didnt have enough boots and many recruits were sent to war in just loafers or sandals. A total of 450 Argentinian Falklands veterans have commited suicide since the war -- more than died during the actual fighting.

"The war was improvised," says Alonso. "The junta wanted the invasion to distract people from resistance to the regime." On March 30, 1982, the unions had called for a mass demonstration against the dictatorship. Three days later, the Argentinian invasion of the Malvinas began. "We were cannon fodder in a war we couldnt win."

Today the war is considered a national humiliation, just like the dictatorship under which about 30,000 people "disappeared." "Most Argentinians have never been to the Malvinas. The war hardly touched them," says sociologist Pedro Brieger. The veterans received no pension until 1991 and many were forced to go begging. They collected money for wheelchairs and artificial limbs on the suburban trains and buses of Buenos Aires.

It was only years after the war that most of the veterans began to organize. Santos cleared a garage and started holding weekly meetings with his fellow veterans there. For the first time, they were able to share their war-time experiences -- "the meetings were a collective therapy." They took to the streets, demonstrating for financial assistance from the government. In 1991, then President Carlos Menem granted them a war pension equal to half the minimum wage. Today they receive 1,200 pesos a month, about €300 ($400). The pensions are so in demand that many people use fraud to get one. Roughly 10,000 of the 25,000 pensions are considered "truchas" or fraudulent.

The veterans of La Plata have only managed to secure relatively stable living and working conditions for themselves over the past few years. They have set up their own association center and -- following tough negotiations -- the city administration has given them public jobs. They also meet with a psychologist once a week in order to deal with their war trauma.

Most would like to travel to the islands once more to visit the graves of their fallen comrades and walk across the former battlefields. But the journey is expensive and complicated, as the only flight there goes via Chile.

Ernesto Alonso went to Stanley with two of his friends in November, courtesy of Chilean national television. At Mount Longon, where the decisive battle was fought and where most soldiers died, he climbed into the same muddy hole that was his refuge during the war. He found his rusty soldiers cutlery and a dented water bottle, which he took back with him.

In Stanley he met Carol Thatcher by chance -- the daughter of former British Prime Minister Margaret Thatcher -- who was shooting a documentary film on "Mummys War."

He posed in front of the camera with some British veterans, who were all highly decorated. "But where are your medals?" the British asked the Argentinian veterans.