Business is not good in El Calafate. Everything is on sale in the shops, and young locals spend their days killing time in tourist cafés. The weather is overcast, and the constant drizzle has deterred all but a few Brazilian backpackers. "The crisis has arrived in Patagonia," says Cristiano Romero, 28. 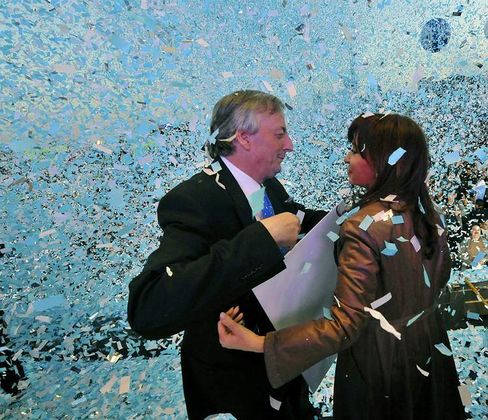 Argentinian President Cristina Kirchner hugs her husband Nestor, who is running for Congress, at a campaign rally in Buenos Aires.

Four years ago, Romero moved from Buenos Aires to El Calafate, deep in the south of Patagonia. He is a tour guide whose business consists of chauffeuring tourists to the Perito Moreno, the country's most famous glacier, 70 kilometers (44 miles) away. The tourists normally provide a good source of income; since the government sharply devalued the peso seven years ago, visitors from around the world have been coming in droves to the southern tip of South America. But those days are gone with European tourists now staying home. Argentina has become too expensive for them, now that inflation has wiped out the benefits of a favorable exchange rate.

The best hotel in town, the Los Sauces, which sits on the shore of the glacier-fed lake Lago Argentino, is empty. But the lights are on in a small wooden building next to the hotel, where two policemen are stationed. A high wall and a dense row of poplar trees block the view of the estate the two officers are here to protect, a purple villa where the most prominent part-time residents of El Calafate live: President Cristina Kirchner and her husband, former President Nestor Kirchner. They own the entire block.

When the lights are on in the guardhouse, the neighbors know that "la Presidenta" is home, and the lights have been on relatively often in recent months. In fact, the president has fled to her refuge 2,700 kilometers (1,690 miles) south of Buenos Aires almost every weekend.

The Kirchners have built a real estate empire of sorts in El Calafate over the years. The presidential family owns half the town, including several hotels. One of them is the Los Sauces, where Cristina herself is said to have selected the furnishings of the posh Evita Suite, named after the Argentine icon Evita Peron, the wife of former President Juan Domingo Peron, who ruled the country in the 1940s and 50s, plus a brief stint in the 1970s. Some residents of El Calafate claim that the president used her official plane, the Tango 1, to transport the furniture for the luxury suite from Buenos Aires to El Calafate. Her husband Nestor is said to own an enormous piece of lakefront property and an asphalt factory. His former chauffeur and a host of friends own other buildings and hotels.

Thanks to tourism and the Kirchners, El Calafate, once a god-forsaken village in the Patagonian wilderness, has been turned into a picturesque small city of 20,000. Luxury boutiques line the main street and local restaurants charge European prices.

President Kirchner often drags her state guests on a visit to Perito Moreno, one of the few glaciers that are still growing and among the world's largest, rising to an impressive height of 60 meters (197 feet) along its escarpment. Prominent visitors have included Brazilian President Luiz Inácio Lula da Silva, the Spanish royal couple and, recently, Venezuelan President Hugo Chavez and his entourage.

This time "la Presidenta" is flying in from Tierra del Fuego, where she has just visited an electronics factory in Ushuaia, at the southern tip of South America, and christened the expansion of the local airport before taking off for El Calafate. It is election season in Argentina. Citizens in many parts of the country will vote for new members of the National Congress on Sunday, and in doing so will also pass judgment on the performance of their president. "If Cristina loses the majority, we could face a crisis like the one in 2001," warns her husband Nestor, her predecessor and the man who came up with the idea of keeping the presidency in the family. "Then the country will explode."

Savior of the Nation

Most Argentineans have nightmarish memories of the serious crisis in 2001, when the economy collapsed, the peso plummeted and hundreds of thousands lost their jobs. Five presidents came and went in the space of 10 days, and Buenos Aires summarily defaulted on its payment of foreign debt. Since then, the country has been hard-pressed to qualify for any international loans.

Nestor Kirchner, a Patagonian native and the leader of the Peronists, guided the country out of the chaos, but despite his success, he decided not to run again in 2007, sending his wife into the race instead. Nevertheless, he still appears to be the pulling the strings in Argentina. In the current election, he is running for a seat representing the important province of Buenos Aires. When debating with political adversaries, he has a tendency to portray himself as the savior of the nation.

Doctored statistics have played an important role in the election campaign, as the government paints an overly rosy picture of the country's economic development. "It is lying to the people about the true scope of inflation," says economic expert José Luis Espert. He predicts a 9 percent drop in agricultural production in the second half of the year. "Our recession is homegrown. It has nothing to do with the global financial crisis. The government is trying to gouge the farmers, our most important economic sector."

During his presidency, Nestor Kirchner tangled with the country's powerful farmers' associations, and the conflict has escalated into a national crisis under Cristina. When the government tried to raise the export tax for agricultural products last summer, Argentina's farmers went on strike for several weeks.

Battle with the Farmers

The government's collision course with agriculture has created deep divisions within its own ranks. In a decisive vote in the congress, Vice President Julio Cobos voted against the government, and the planned tax increase failed. But the dispute with farmers is far from over. Because the government sets the prices for meat, more and more cattle ranchers are switching to the more lucrative business of growing soybeans. High taxes imposed on the sale of soybeans, an important source of vegetable oil, are a key point of contention between the farmers and the Kirchners. At the same time, farmers were recently plagued by the worst drought in half a century, when tens of thousands of cattle died of thirst and crops dried up in the fields. Now the country faces the possibility of severe food shortages, and experts expect that Argentina, world-famous for its steaks, will have to start importing meat by 2012.

The conflict has also divided the Peronists. Several renegade members of parliament have joined forces to form a dissident group opposing the Kirchner faction. Senator Carlos Reutemann, the Peronist former governor of the agricultural province of Santa Fe, has also withdrawn his support for the president. A former racecar driver and soybean farmer, Reutemann is eying a run for the presidency in 2011.

The non-Peronist opposition is also getting a boost for the first time, and it is pinning its hopes on a famous name: Ricardo Alfonsin. The son of former President Raul Alfonsin, who died in March, is expected to revive the prospects of his party, the deeply traditional Radical Civic Union (UCR), for winning a majority. With his moustache and droopy eyes, he looks like a younger version of his famous father. "We can break the Peronists' monopoly," Alfonsin assures his supporters.

After the ignominious resignation of former President Fernando de la Rua, who fled the presidential palace in a helicopter during the 2001 crisis, the country's oldest party fell into irrelevance. But the nation was deeply moved by the death of the deeply revered Alfonsin. Tens of thousands wept at the casket of the former president, who led the country out of dictatorship in the 1980s. Now politicians of all stripes are trying to claim his political legacy as their own.

Meanwhile, the Kirchners are seeking support among the Peronist old guard. Their campaign spokesmen include mafia-like union bosses and popular folk musicians like singer Nacha Guevara. Even autocratic Venezuelan President Hugo Chavez, an admirer of Peron, recently voiced his support for the beleaguered Kirchners. "I wish him luck; he is my friend," Chavez said, referring to Nestor Kirchner's congressional candidacy.

Chavez has bailed out the couple once before. During the 2007 presidential campaign, he sent a suitcase filled with $800,000 (€570,000) to Buenos Aires, presumably as a contribution to Cristina's campaign. He also spent $7 billion (€5 billion) on Argentine government bonds, rescuing the country from another national bankruptcy. But Chavez came empty-handed during his most recent visit, now that he faces problems of his own as a result of the temporary drop in oil prices. Nevertheless, Chavez and the Kirchners seem to get along famously. In El Calafate, the president and her husband served their friend Hugo roast lamb and stuffed dumplings.

Chavez was in excellent spirits. He posed for photos with cooks and waiters, handed out autographs like a pop star and admired the local glaciers. As he was saying his goodbyes, he asked for two bottles of Cristina's Patagonian house wine, a gift "for a special friend," Chavez said: Cuba's ailing leader, Fidel Castro.