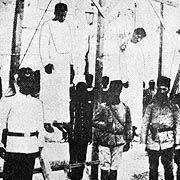 Picture circa 1915 of Turkish soldiers standing next to the hanged bodies of Armenians.

Stephen Walt is a down-to-earth man who doesnt like long sentences. He is a professor at Harvard and together with his colleague from Chicago John Mearsheimer he caused quite a fuss earlier this year. They published an article and then a book with the simple title "The Israel Lobby." Their central thesis: A small group of very influential friends of Israel have forced US foreign policy into an unconditional backing of Israel, which is damaging Americans' strategic interests.

When SPIEGEL ONLINE recently asked Walt if other interest groups had a similar influence in Washington, the realist wouldnt hear of it. He said that the actions of Armenian-Americans or Cuban-Americans would never have the same far-reaching effects on US foreign policy.

Really? Two days ago the House of Representatives' Foreign Affairs Committee approved a remarkable resolution. The mass murder of Armenians in the Ottoman Empire starting in 1915 was to be named genocide.

The result was a medium-level political earthquake. US President George W. Bush reacted with anger. Turkey temporarily recalled its ambassador from Washington, and Turkish newspapers seethed with rage. And all that even though the resolution is only symbolic in character and won't be presented to Congress for a vote until November. How could it go so far?

Armenians say that more than 1.5 million people were killed during the deportations and massacres during World War I, while according to Turkish figures between 200,000 and 300,000 Armenians were killed. Turkey still refuses to accept the description of the crimes as genocide and speaks instead of the "repression" of a rebellious people who were allied with the Russians during World War I.

The Triumph of the Armenian Lobby

Armenian-Americans have been fighting for years to have the massacre of Armenians be officially named genocide in the United States.

Concerns over a lasting cooling of relations between Turkey and the US had always prevented a genocide resolution being passed -- President Bush had failed to stick to his election promise to work towards the recognition of the genocide. He regularly declined to use the word genocide in his annual speech in April to mark the beginning of the massacres. In 2000 a similar draft resolution was pulled when US President Bill Clinton intervened at the last moment.

The fact that it has now been approved is a triumph for the "Armenian Lobby," if you want to call them that. Around 1.2 million Americans have Armenian forefathers and many of them grew up listening to the tales of the suffering of their people.

Armenian-Americans are particularly active in California, New Jersey and Michigan -- which happens to be the constituency of Nancy Pelosi, the Democratic Speaker of the House. Her Californian colleague Adam Schiff, who promoted the resolution, has the issue to thank for his own political career. His predecessor in the constituency lost his seat when he failed to push through the resolution in 2000.

Armenian groups have been bombarding their representatives over the past few years with an unusually massive PR drive. Their most important umbrella group "Armenian Assembly of America" has 10,000 members and an annual budget of over $3.5 million. It employs four different influential PR firms in Washington to keep the suffering of the Armenians on the agenda in the US capital.

The Turkish government couldnt do enough to counter them, even though for years it has invested millions of dollars in presenting its arguments. Ankara engaged prominent former representatives like Republican Bob Livingston, who even produced his own video in which he argued against unnecessarily damaging relations with Turkey. And he said that Turkey was still an important symbol of how a Muslim society can build democratic structures.

In the complicated intertwining of minority representation in the US, many Americans with Armenian roots also say the approval of the resolution as a sign that they have arrived in the center of American society. They compare their lobby work with the success of the Jewish lobby in the US, which has anchored the commemoration of the Holocaust in Americans' collective memory.

Admittedly they have a long way to go: the massive protests against the resolution showed the effects of its passage a day later. Of course, some representatives ruefully admitted that perhaps it was not the best of the timing. According to the hearing, the congressional representatives are already considering another resolution -- one that would stress how important relations with its Turkish ally are to the US.

And President George W. Bush immediately expressed his concern, saying the initiative undermines relations with a close ally in the fight against terrorism. All eight living former US Secretaries of State signed a letter of protest against the resolution. Secretary of Defense Robert Gates sought to remind people that around 70 percent of all air transports for the US troops heading to Iraq go through Turkey. And US Under Secretary of State for Political Affairs, Nicholas Burns, tried for an entire day at the beginning of the week to convince members of Congress to veto the resolution.

That's an awful lot of attention paid to a vote about an historical event about which very few Americans (or even Europeans) know the details. But because the memory of the Armenian suffering is still a delicate subject for modern Turkey, any attempt to deal with it risks being a powder keg for the once-warm relationship between the US and Turkey.

The relationship has been approaching a crisis for some time -- recently more than ever because the Turks are agitated about the attacks by militant Kurdish troops in Iraq and are even considering a military attack. The US wants to avoid this at all costs. Turkey's logistical support for the US-led Iraq invasion is, in turn, still highly controversial. A current poll reported that 83 percent of Turks would wish to discontinue such support if the US Congress votes to pass the Armenian resolution.

The Turks have proven in the past that such threats are not empty promises: When the French parliament passed a resolution making denial of the Armenian genocide a crime punishable by law in 2006, the Turkish broke off their military relationship with France. But up until now there has been no clear sign -- aside from the short-term departure of the ambassador to Washington -- that they would go far beyond symbolic gestures.