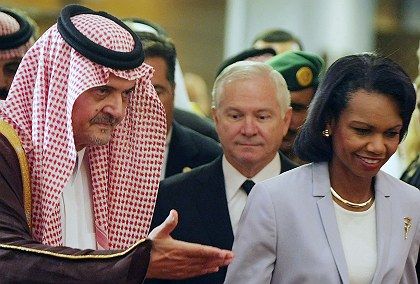 Karsten Voigt, the German governments Coordinator for German-American Cooperation, was completely gobsmacked last week. How Washington could encourage democratic change in the Middle East by selling Saudi Arabia billions of dollars in weapons, he said, was a huge question mark. The Islamic kingdom might be a US ally in name, but it wasnt particularly democratic, said Voigt, and its oppressive family regime continued to be a fertile breeding ground for Islamic terrorists.

At a summit meeting at the end of July, top US officials announced a deal to send major new weapons systems to Saudi Arabia, Egypt, Israel and other governments in the Middle East to counterbalance Iran's growing influence there.

Voigt wondered whether it was a wise move. "The region is not suffering from a lack of arms, but from a lack of stability," he said. "I have strong doubts whether stability could be achieved with these weapons."

But such arms deals have a long tradition in Washington. The enemy of my enemy is my friend was a maxim of several US governments during the Cold War. Washingtons foreign policy often sanctioned selling weapons to questionable regimes promising to help contain the communist threat regardless of the potential consequences.

The deals frequently ended as debacles: US soldiers have all too often stared down the barrels of guns their own government sold to the armies of countries that used to be their supposed allies. The convoluted US-Iranian relationship is a textbook example of such policies.

After the Shah of Iran consolidated his power with CIA help in 1953 in what is known as Operation Ajax, the country became Americas most important ally in the Middle East after Israel. In return for access to Irans bountiful oil fields, Washington sold the Shah an arsenal of modern weapons. With state-of-the-art fighter jets, new rockets and powerful tanks, Iran became a leading military power in the Persian Gulf. Some 40,000 US military advisors taught Iranians how to use the weapons.

After the Islamic fundamentalist regime led by Ayatollah Khomeini toppled the Shah in 1979 and sparked a crisis by taking 52 Americans hostage, it became painfully clear to Washington that its weapons were now in the wrong hands. And so the US government quickly turned to the biggest enemy of the religious fundamentalists -- Iraqi dictator Saddam Hussein.

For eight years -- until 1988 -- Hussein waged a brutal war with his eastern neighbors, supported with weapons and know-how from American sources. Even Donald Rumsfeld, who would go on to plan the current war in Iraq as defense secretary under US President George W. Bush, visited Hussein in 1983.

As a sweetener, the Americans offered Baghdad classified aerial photographs that allowed Husseins generals to inflict great damage on Iranian forces -- sometimes using chemical weapons. Only a few years later, of course, US soldiers would wage a war with the very Iraqi military that Washington had so meticulously helped build.

Land Wars in Asia, and Elsewhere

The United States also supplied Afghan freedom fighters in the 1980s with money and arms for their struggle against occupying Soviet troops. One of the best customers for the CIA back then was Saudi millionaire Osama Bin Laden. Two decades later, US commandos are hunting for the worlds most notorious terrorist and his Taliban helpers. Military and civilian aircraft flying over Afghanistan are still forced to make evasive maneuvers to avoid Stinger missiles fired at them which were originally supplied by the United States to fight the Communists.

Washington protected and supported Panamanian dictator Gen. Manuel Noriega for years. Despite all the cash and weapons from America, he also was deeply involved in the drug trade. That led the father of the current US president, George Bush senior, to depose the strongman by sending troops to the Central American country in Operation Just Cause. Noriega was sent to jail in Miami.

The Americans also had little luck with their strategy in the Philippines. As Ferdinand Marcos came to power in Manila in 1965, it appeared as if both sides would benefit. The new president sent Filipino troops to bolster Washingtons flagging war effort in Vietnam. In return, the United States supported the regime in Manila both politically and militarily -- even though it was clear that Marcos henchmen were using US weaponry to oppress the countrys opposition. The instability that continues to plague the Philippines today is part of that legacy.

US Secretary of State Condoleezza Rice defended the latest string of weapons deals during her recent diplomatic tour of the Middle East. "We are determined to maintain the balances -- the military and strategic balances -- within the region," she said. But American weapons have a way of outlasting the shifting goals of American foreign policy.