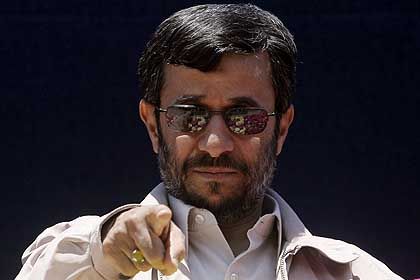 Only you can prevent regional conflict.

It's hardly surprising any more when Iranian President Mahmoud Ahmadinejad threatens Israel with destruction. It wasn't so long ago that he suggested the country be moved to Alaska. Or just wiped off the map.

But in a Thursday speech at Isfahan broadcast on state television, he issued a threat more direct than any that had come before. If Israel, he said, were to go to war against Lebanon again this summer, it would be destroyed.

"If this year you repeat the same mistake of the last year," the Iranian president intoned, "the ocean of nations of the region will get angry and will cut the root of the Zionist regime from its stem."

The speech came just hours after a report by the UN's nuclear watchdog, the International Atomic Energy Agency (IAEA), warning that Iran's ongoing enrichment of uranium meant that the country could have a nuclear bomb within three to eight years.

The IAEA report just came in time for the UN Security Council to impose a third round of sanctions on Tehran for its lack of transparency in what Iranian leaders insist is a peaceful nuclear program. Ahmadinejad flaunted the threat of sanctions in his Thursday speech. "The enemy wants Iran to surrender so it won't have any say in the world," he told a gathering of Iran's elite Revolutionary Guards. "If we stop (the nuclear program) for a while, they (Iran's enemies) will achieve their goals."

In his speech, Ahmadinejad also referenced recent violence in the Gaza strip. "If you think that by bombing and assassinating Palestinian leaders," he said addressing Israel, "you are preparing ground for new attacks on Lebanon in the summer, I am telling you that you are seriously wrong."

He went on to reference Israeli history. "Sixty years of invasion and assassination are enough. If you do not cease invasion and massacre, soon the hand of power of the nations of the region will rub you criminals with Earth," he said.

Israeli experts have been talking for months about the possibility of another war with Lebanon this summer, but it was seen as unlikely because last July's conflict with Hezbollah was so inconclusive.

Thursday's IAEA report mentioned diagrams in Iran's possession -- among other suspicious documents -- showing how to shape uranium so it would fit into warheads. Otherwise it was brief, and noted for the first time that the IAEA's understanding of some aspects of Iran's nuclear program was "deteriorating."

The IAEA's chief, Mohamed ElBaradei, said it was probably too late to force Iran to freeze enrichment. He suggested Iran should be allowed to keep some elements of its enrichment program and recommended "a comprehensive dialogue" as a way to keep Tehran from joining the nuclear-weapons club.

On Monday, US and Iranian diplomats are scheduled to hold direct talks in Baghdad on how to stabilize Iraq. Nuclear weapons won't be part of the talks officially, and in the meantime the Pentagon has sent two aircraft carriers and seven other warships to the Persian Gulf as a show of force. Iran has also detained at least two prominent American-Iranian citizens.

ElBaradei on Thursday advised the US to tone down its rhetoric against Iran. But an under secretary of state for policy in Washington, R. Nicholas Burns, spoke freely to the Associated Press. "Iran is out of compliance," he said. "Iran is thumbing its nose at the international community. We're not going to accept limited enrichment, not going to accept that 1,300 centrifuges (in Iran) can continue to spin."

UN Security Council consultations on new sanctions were likely within days, according to AP.