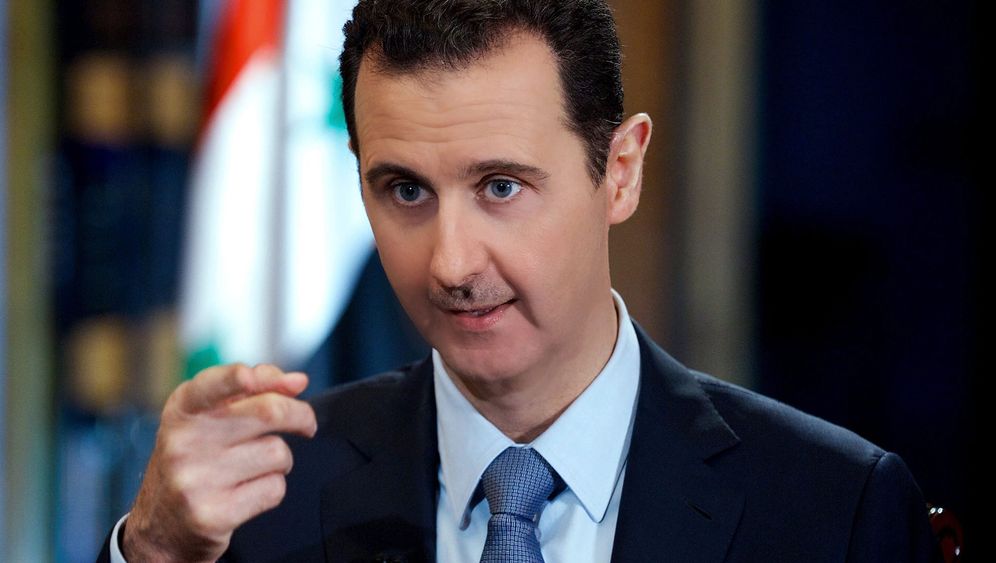 Sex sells. And al-Qaida is eager to grab attention. But the combination of the two -- sex jihad -- is simply irresistible. Scores of young women are reportedly offering themselves to jihadists, according to one of the latest horror news stories coming out of Syria. A sheik from Saudi Arabia has allegedly issued a fatwa that allows teenage girls to provide relief to sexually frustrated fighters.

In late September, 16-year-old Rawan Qadah appeared on Syrian TV and gave a detailed account of how she had to sexually satisfy a radical insurgent. After the Tunisian interior minister stated that young women from his country were traveling to Syria for sex jihad -- and having sex with 20, 30 and even up to 100 rebels -- the story started to make headlines in Germany, as well. In Germany, the websites of the mass circulation Bild newspaper and Focus magazine have titillated readers with articles about this supposed "bizarre practice."

In the wake of the poison gas massacre on Aug. 21, the regime in Damascus has launched a major PR offensive. Beyond the official line of propaganda, though, there is a second campaign: a secret and elaborately staged effort to sow doubt and confusion -- and divert attention away from the Syrian government's own crimes. Like many of these bogus news stories, the sex jihad tales aim to convince supporters at home and critics abroad of the rebels' monstrous depravity.

No other leader in the region -- not Saddam Hussein in Iraq, nor Moammar Gadhafi in Libya -- has relied as heavily on propaganda as Assad. His PR teams and state media are churning out a steady stream of partially or completely fabricated new stories about acts of terror against Christians, al-Qaeda's rise to power and the imminent destabilization of the entire region. These stories are circulated by Russian and Iranian broadcasters, as well as Christian networks, and are eventually picked up by Western media.

One prime example is the legend of orgies with terrorists: The 16-year-old presented on state TV comes from a prominent oppositional family in Daraa. When the regime failed to capture her father, she was abducted by security forces on her way home from school in November 2012. During the same TV program, a second woman confessed that she had submitted to group sex with the fanatical Al-Nusra Front. According to her family, though, she was arrested at the University of Damascus while protesting against Assad. Both young women are still missing. Their families say that they were forced to make the televised statements -- and that the allegation of sex jihad is a lie.

An alleged Tunisian sex jihadist also dismissed the stories when she was contacted by Arab media: "All lies!", she said. She admitted that she had been to Syria, but as a nurse. She says she is married and has since fled to Jordan.

Two human rights organizations have been trying to substantiate the sex jihad stories, but have so far come up empty-handed. It appears that the Tunisian interior minister had other motives for jumping on this rumor: Hundreds of Islamists have left his country and traveled to Syria, and he is apparently trying to stem the tide by discrediting these fighters. Furthermore, Sheikh Mohammad al-Arifi, the man who is allegedly behind the sex jihad fatwa, denies everything. "No person in their right mind would approve of such a thing," he says.

It is difficult -- and, at times, even impossible -- to verify all the horror stories emerging from the civil war in Syria. This holds especially true when they are disseminated in a roundabout way, as is the case with most of the reports of persecuted Christians.

For example, on Sept. 26, the German Catholic news agency KNA issued a report -- citing the Vatican news agency Fides -- stating that Muslim legal scholars in the opposition stronghold Douma, near Damascus, had called for "the property of non-Muslims to be confiscated." Fides said that it had a copy of a document that was signed by 36 Muslim religious figures. Yet although this appeared to be a serious story, it turned out to be based on a forgery: a fictitious text with real signatures. It actually came from a 2011 statement calling for civilians to be spared during the fighting. On a number of occasions, Fides has accepted as true propaganda fabrications released by regime-affiliated portals, such as Syria Truth.

This also includes the myth of the beheading of a bishop -- a story also spread by Assad in an interview with SPIEGEL. The fact of the matter is that a jihadist from Dagestan killed three men in this way, but they weren't Christians. After getting the stamp of approval from the official news agency of the Vatican, such rumors generated by Assad's propaganda machine are circulated around the world as bona-fide new stories.

The facts were twisted in a similar manner when an image of a woman tied to a pillar in Aleppo appeared on the LiveLeak video portal in mid-September. The website claimed that the woman was a Christian from Aleppo who had been abducted by al-Qaida rebels. In reality, although the photo was taken in Aleppo, it dates back to a period when Assad's troops still controlled the entire city. A video of the scene, posted on YouTube on June 12, 2012, shows regime-loyal militias berating the woman.

The regime also concocted the legend of the destruction of the Christian village of Maaloula. In early September, rebels belonging to three groups, including al-Nusra, attacked two military posts on the outskirts of town held by members of the local Assad-loyal Shabiha militias. Then the rebels withdrew. But the regime's version, which even managed to become an Associated Press story, was as follows: Foreign terrorists looted and burned down churches -- and even threatened to behead Christians who refused to convert to Islam.

This didn't match with reports from the nuns of the Thekla convent in Maaloula and the Greek Orthodox patriarch of Antioch. They said that nothing had been damaged and no one had been threatened on account of their beliefs. A reporter from the satellite news network Russia Today unwittingly cleared up the confusion. While accompanying the Syrian army, he filmed the tank attack on Maaloula -- in which the local monastery was shelled.

This ongoing reinterpretation of events reflects a conscious policy -- and bending the truth is much easier now that Syria has become such a confusing and chaotic theater of war. Most news publications shy away from the risks and efforts of verifying stories on the ground. Actual events, such as when jihadists burned down a church in the northern Syrian town of Rakka, are mixed together with trumped-up atrocities staged to sway global opinion.

Even blatant inconsistencies are often accepted without question. After all, tangible evidence to the contrary rarely exists. When state-run media reported that the prominent imam Mohammed al-Buti, a supporter of Assad, was killed by a suicide bomber at his mosque in the heart of Damascus on March 21, all rebel groups denied having anything to do with the attack. Of course, that doesn't necessarily mean much. But even an untrained eye would have to notice that the photos showed no signs of an explosion: Chandeliers, fans and carpets were all intact. Instead, there were bullet holes clear across a marble wall, and pools of blood apparently showed where the bodies had lain. Many of the victims were wearing shoes, which is highly unusual for Muslims in a mosque. There were also no witnesses. All of this feeds the suspicion that the victims were forced into the building and murdered -- as a backdrop for an attack that never occurred.

After the poison gas attack in August, though, the propaganda cover-up failed. Inundated by a global wave of indignation, the regime floundered in its attempts to explain the situation. First, Assad said that nothing had happened. Then state television showed images of an alleged rebel hideout containing a barrel with the blatantly obvious label: "Made in Saudia." The TV report maintained that this was sarin gas from Saudi Arabia for "terrorists" who had inadvertently gassed themselves to death.

The source of the story was a little known news website called Mint Press, based in the northern US state of Minnesota. One of the authors later denied having anything to do with the research. The other, a young Jordanian who writes under a number of pseudonyms, merely responded to queries by saying that he was currently studying in Iran. In an online comment on an article in Britain's Daily Mail, though, he gave the following detail that was missing on Mint Press: "Some old men arrived in Damascus from Russia and one of them became friends with me. He told me that they have evidence that it was the rebels who used the (chemical) weapons." A few days later, the Russian foreign minister quoted the report from Mint Press as proof of Assad's innocence.

An entirely different explanation for the alleged gas attack by the rebels was presented to British broadcaster Sky News by Assad's top media adviser, Buthaina Shaaban: She said that terrorists had abducted 300 Alawite children from Latakia, taken them to Damascus and murdered them so they could be presented to the world as victims.

And now comes a new line of defense that neither relies on chemicals nor argues that the rebels killed themselves: In a SPIEGEL interview, Assad states that sarin is a "kitchen gas" because "it can be made anywhere." But this flies in the face of a United Nations report, which states that rockets carrying sarin gas could only have come from a military base run by government forces.

Although Assad likes to cover up his crimes with a crisis-driven media blitz, he actually prefers to meet with the press and directly tell his side of the story. This includes presenting his regime as a final bulwark against global terror, even though he has his agents carry out the very kinds of attacks he is warning the world about and attributing to his rivals. For example, police in Turkey and Lebanon have charged the Syrian intelligence agency with responsibility for the most devastating attacks in years. After two bombs in Tripoli killed 47 people on Aug. 23, a Lebanese court issued an arrest warrant against two Syrians -- for planning acts of terrorism.