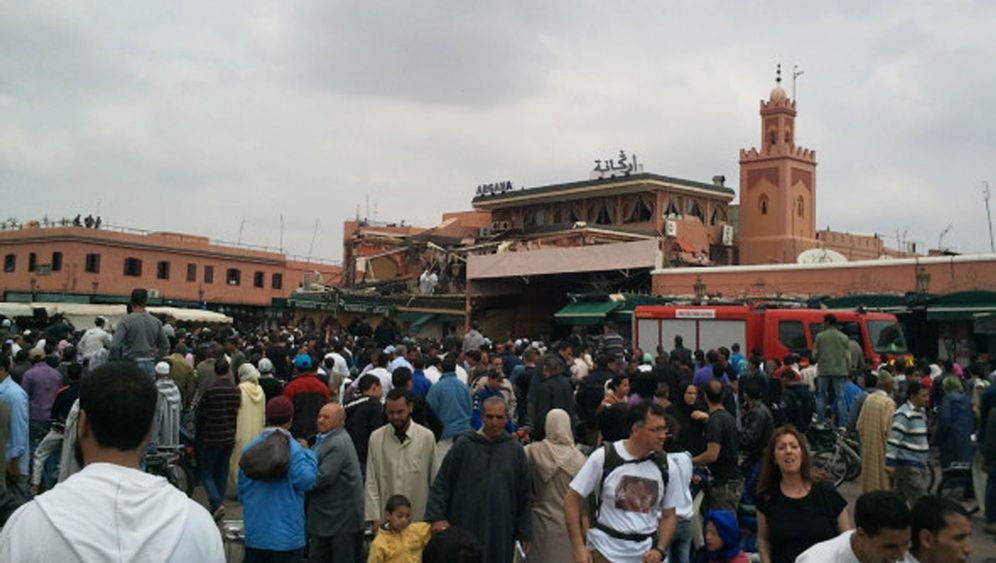 An apparent terrorist attack shook Marrakech, Morocco on Thursday, killing more than a dozen and injuring 20 more. Eleven of the dead are believed to be foreigners, possibly tourists.

The probability it was a terrorist attack is high given that the Argana cafe is a tourist magnet in the picturesque desert city. The restaurant's terrace offers spectacular views of Djemaa el Fna Square in the city's bazaar quarter. The historical buildings and surrounding grounds are designated as a UNESCO World Heritage site.

Eyewitnesses reported that debris from the building had fallen onto the square. The explosion was so powerful it could be heard as far as 2 kilometers away.

The bombing attack is the first major strike on Morocco since a series of suicide attacks shook the port city of Casablanca in 2003. The attacks on Western and Jewish institutions there killed 45 people, including 12 suicide bombers.

The suspected perpetrator of Thursday's attack is likely to be al-Qaida's North African branch, al-Qaida in the Islamic Maghreb (AQIM). The local branch of Osama bin Laden's global terror network is based in Algeria and northern Mali, but also has representatives in Morocco and has conducted several attacks on North Africa in the past that have targeted tourists or Western facilities. That could also explain the site of the explosion, one of Marrakech's most popular attractions, visited by tourists year round.

It cannot, however, be ruled out that a local terror group, independent of al-Qaida, planned and carried out the bombing. Several such groups exist and have carried out attacks in the past. Andrew Lebovich, a researcher at the New America Foundation who tracks AQIM, says that, while the Thursday attack fits the al-Qaida pattern, one cannot ignore the existence of other militant groups in Morocco. It is too early to pin the blame on AQIM.

AQIM originated in 2006 out of the Algerian terrorist group GSPC and has increased its activities in recent months in the region, particularly in the Sahel. In statements, the leadership has said that the West, its people and its interests are prime targets of the terror group. Just a few days ago, AQIM released a video showing French hostages. In recent years, analysts believe, AQIM has amassed money in the double-digit millions through ransom payments. In 2009, AQIM men killed a British hostage. During August of the same year, AQIM operatives also attacked the French Embassy in Mauritania.

AQIM Wants to Establish a Theocracy

The group has deployed suicide attackers several times since 2007, including attacks on Algerian government institutions that have in some instances caused dozens of deaths. Numerous arrests of suspected members of the group have been made in Morocco. Last July, French and Mauritanian special forces worked together to storm an al-Qaida base. At the time, officials hoped the operations had helped to foil plans by the group to commit terrorist attacks.

Al-Qaida in Islamic Maghreb's stated goal is to establish a theocracy, but also to "reconquer" the former Muslim areas of Spain and Portugal. They are also avowed enemies of France, and the organization has criticized President Nicolas Sarkozy over French integration policy, including the newly passed burqa ban.

But experts disagree on the question of how close ties are between global al-Qaida leader Osama bin Laden and AQIM leadership. A few weeks ago, AQIM declared that the French government must negotiate the release of French hostages directly with bin Laden. It was an obvious attempt to embarrass Paris -- but it also sent the message of a strong bond with al-Qaida central. The Qaida central leadership, in the meantime, has signalled that they hope that AQIM will conduct a spectacular terrorist strike in Europe, but so far it hasn't gotten that far -- either because AQIM doesn't have the capacity or because the group doesn't want to operate outside of the their ancestral region due to tactical considerations.

Attacks on tourists have long been a hallmark of al-Qaida terrorists because they fulfil three aims at the same time: They kill Westerners, they embarrass local security authorities and they damage the tourism industry and thus indirectly, local regimes which the terrorists deem insufficiently Islamic.

The explosion in Marrakech would certainly fulfil all these goals. Morocco is one of the most peaceful and stabile countries in the Arab region and has been spared terrorist violence in recent years. This year, it has also managed to avoid the kind of grassroots revolution that has toppled regimes across North Africa and threatened several others in the Arab world.

A jihadist attack in North Africa at a time when al-Qaida has been incapable of coming up with any meaningful response to the uprisings in countries throughout the Arab world would be useful to the terrorist network because it could demonstrate to its supporters that it still has a strategy and the ability to strike.

It would be very difficult to imagine that a terrorist group other than AQIM could be behind Thursday's attack. If it is confirmed to be a terror attack, it will almost certainly be attributed to bin Laden's cohorts. As of late Thursday, however, no group had yet taken responsibility for the attack.