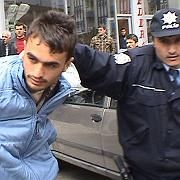 A suspect is detained by Turkish police following the killing of three employees of a Christian publishing house in Malatya, eastern Turkey.

Attackers in eastern Turkey murdered three employees of a Bible publishing company, including one German, on Wednesday.

The victims had their hands and feet tied and their throats slit, reports said. A fourth person escaped by jumping out of a window and is being treated in hospital.

The CNN-Turk news channel reported that six suspects have been detained. It showed bodies being carried out of the building of the Zirve publishing house in the town of Malatya. The company publishes Bibles and other Christian literature.

The Zirve publishing house had been the site of previous protests by nationalists and the company's director Hamza Ozant told CNN-Turk that his employees had been threatened recently.

The government and other officials in Turkey have in the past criticized Christian missionary work in the country while the European Union, which Turkey hopes to join, has called for more freedom for the small Christian minority. The country is 99 percent Muslim, though officially secular. Some Turkish nationalists see Christian missionaries as enemies working to undermine Turkey's political and religious institutions.

Malatya is known as a hotbed of nationalists, and is the hometown of Mehmet Ali Agca, who shot Pope John Paul II in 1981. Police are investigating the possibility that an Islamic militant group, Turkish Hezbollah, could be involved in the attack.

Last year a priest was shot dead in the Black Sea province of Trabzon, which coincided with worldwide protests over cartoons of the Prophet Muhammad. Two other priests were also attacked last year.

Earlier this year, Armenian-Turkish editor Hrant Dink was murdered by an ultranationalist, which prompted extra security measures to be taken for writers and journalists. Dink was also from Malatya.