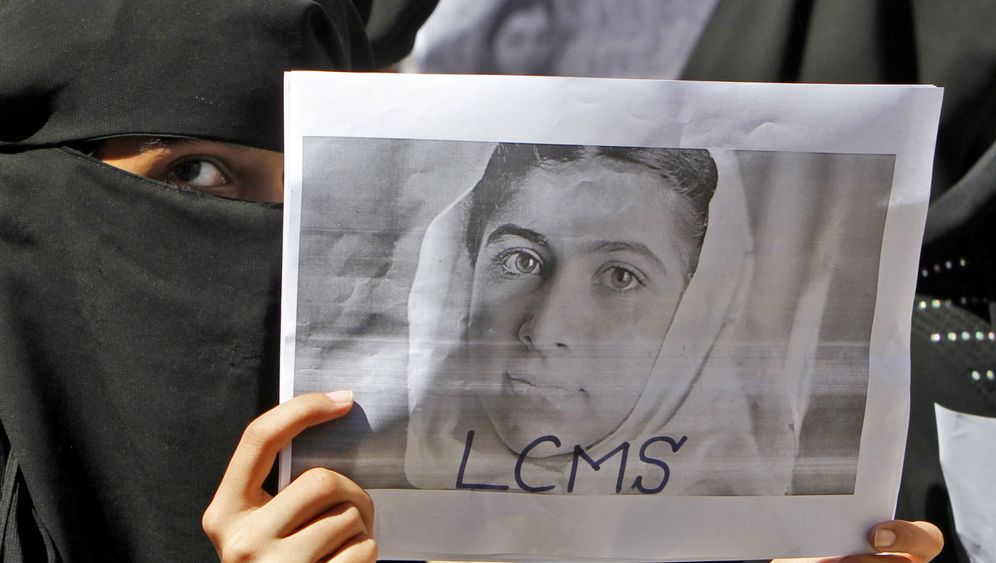 People in Mingora, Pakistan, speak of a "very strange feeling" that has crept over them since Tuesday. The gruesome images are suddenly back, memories of the Taliban marauding through the streets, throwing women on the ground and whipping them, and publicly executing their rivals. The extremists ruled here in northern Pakistan's Swat Valley for two years, until the Pakistani military drove them out in the spring of 2009. But the shooting that took place here on Tuesday has brought back their fears, people say. It's as if the Taliban had never left.

Merchants, teachers and workers say that two men tried to kill a young schoolgirl on a bus in the middle of the day. Their target was Malala Yousufzai. During the Taliban's rule, the 14-year-old girl had written a blog about the horrors of everyday life under the extremists for the BBC's website. Since then, she has publicly championed girls' right to education. Yousufzai was shot in the head and shoulder. Two other passengers on the bus were wounded, one severely.

The Taliban are apparently afraid of a girl who dared to raise her voice against them. Three years ago, when they still ruled over the Swat Valley, they warned her to stop writing the blog, which she had penned under the pseudonym Gul Makai for her own safety. In December 2011, when Yousufzai was awarded Pakistan's first National Peace Prize, Ahasnullah Ahsan, a spokesman for the Pakistani Taliban, announced that she had been placed on the extremists' hit list.

After this week's attack, the same spokesman told reporters that Yousufzai is a "symbol of Western culture" and was propagating it in a Pashtun area. "She is against Islam and spreads secular thoughts," he said. He also added that, if she survives, she will remain a target for assassination -- as well as her family and, in particular, her father, who runs a private school in the Swat Valley. "According to Islamic law," he said, "whoever acts against Islam must be killed." The girl's shooting, he said, is a "warning to all young people involved in similar activities that they will likewise become targets if they don't stop."

On Friday, Pakistani police announced the arrest of a number of people suspected of involvement in the shooting. But the announcement has done little to calm the worries of people in the Swat Valley. They fear the Taliban is regaining strength. Pakistan's military regularly stresses that it defeated the militants during its operations in 2009. But, in reality, it only succeeded in dispersing them and, at the time, it didn't arrest or kill any senior Taliban military commanders. Indeed, if you ask around, it doesn't take long before you are put in contact with a Taliban representative. "We are afraid that they will be back on the streets again soon, spreading fear and terror," says one merchant who claims the extremists have ransacked his store multiple times.

Yousufzai has survived the attack. She was treated in a hospital in the Swat Valley before being airlifted by military helicopter to Peshawar, where doctors removed the bullet from her shoulder. Mumtaz Khan, a doctor, reported that she had made movements but remained unconscious. Although he couldn't say whether she would have permanent damage, he predicted that her chances of survival were very good. On Thursday, Yousufzai was flown to a military hospital in Rawalpindi, reputed to be among the best in Pakistan. There, she will be cared for by leading surgeons in the Pakistani army.

The doctors say that she will be taken abroad for treatment if her condition stabilizes. Dubai, England and Germany are reportedly under consideration. Several politicians and governments have indicated a willingness to cover the costs of her treatment.

The episode has sparked outrage and protests of an intensity rarely seen in Pakistan. Mian Itikhar Hussain, the information minister of Khyber Pakhtunkhwa province whose son was shot dead by the Taliban in 2010, announced a bounty of 10 million rupees (roughly €80,000 or $100,000). Prime Minister Raja Pervez Ashraf called for battling the "mind-set behind this deed." Speaking before parliament, he added: "Malala is my daughter, and yours as well." "If the mind-set of the perpetrators establishes itself," he asked, "then whose daughter will ever be safe?"

Even the charity organization Jumaat-ud-Dawa, a part of the terrorist organization Lashkar-e-Taiba, wrote on its Twitter feed that the deed was "shameful, despicable (and) barbaric," adding that it is "shameful … to justify this horrendous attack through Islam."

General Ashfaq Parvez Kayani, the head of the Pakistani army, visited the young girl in the hospital on Wednesday and circulated a press release saying: "The cowards who attacked Malala and her fellow students have shown time and again how little regard they have for human life and how low they can fall in their cruel ambition to impose their twisted ideology."

Still, the Taliban isn't impressed by such statements. Reached by phone, a Taliban commander told SPIEGEL ONLINE: "These statements show who represents the true Islam and who merely uses the religion as an adornment."

Comments like this are proof that the Taliban are unwilling to compromise or negotiate, that they are still striving to assume power and that they are pursuing a society in which girls are not allowed to go to school. In recent years, they have destroyed over 200 schools in Pakistan.

There have also been loud protests against the assassination attempt outside of Pakistan. US President Barack Obama called the act "reprehensible, disgusting and tragic." US Secretary of State Hillary Rodham Clinton said she hoped that advocates of women's rights in Pakistan would be bolstered in the wake of the attack. United Nations Secretary-Germany Ban Ki-moon called it a "heinous and cowardly act." And Catherine Ashton, the European Union's foreign affairs chief, said: "This vile aggression is an assault both on basic human values and against all human rights defenders in Pakistan."

American pop star Madonna even discussed the attack on Yousafzai during a concert in Los Angeles on Wednesday. "The 14-year-old schoolgirl who wrote a blog about going to school. The Taliban stopped her bus and shot her. Do you realize how sick that is?" Madonna said to a sold-out crowd of 18,000, according to the Hollywood Reporter. She had also stenciled "Malala" on her back for the concert and dedicated a song to her.

On Friday, a number of schools in the Swat Valley held a moment of silence to show solidarity with Yousufzai -- and to express their hope that the Taliban never returns to power. 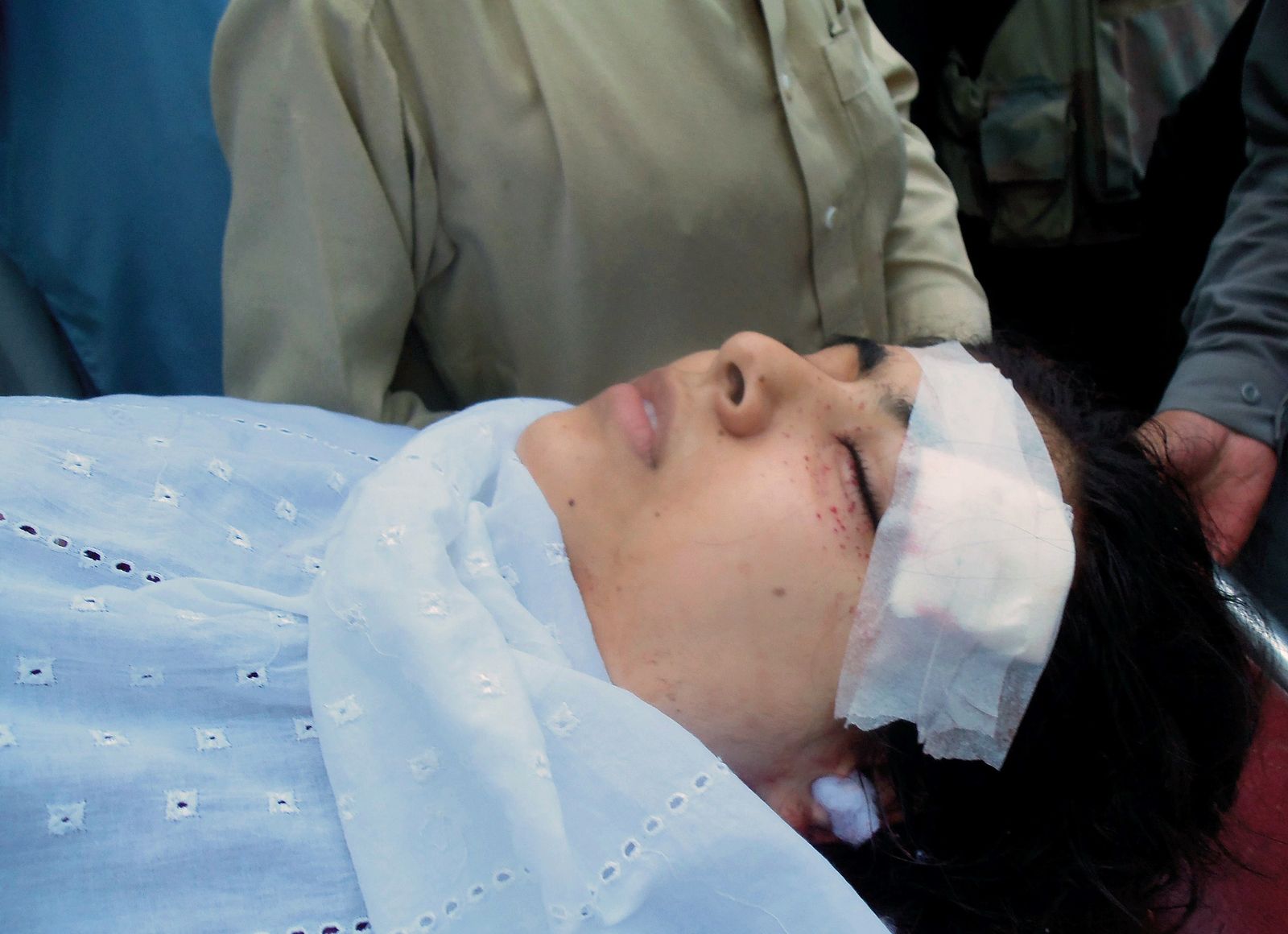 Three years ago, when the Taliban still ruled over the Swat Valley, they warned her to stop writing the blog. In December 2011, when Yousufzai was awarded Pakistan's first National Youth Peace Prize, Ahasnullah Ahsan, a spokesman for the Pakistani Taliban, announced that she was on the extremists' hit list. After this week's attack, the same spokesman told reporters that Yousufzai would remain a target even if she survives.