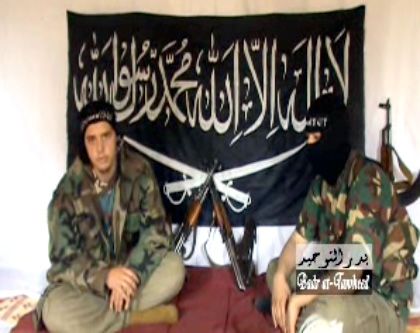 Eric B. calls on his brothers in Germany to join the jihad.

The news spread like wildfire through the offices of Germany's intelligence agencies. Two new terrorist videos had turned up on the Turkish-language Web site "Time for Martyrdom," which has become an important mouthpiece for Islamist propaganda. And once again there were was a clear connection to Germany.

German terrorist investigators are alarmed at the new videos. After an initial assessment, it was clear that the two short films feature the German Islamist Eric B. from Neuenkirchen in Saarland. For the past few weeks, a publicity campaign in Kabul has focused on finding him and his presumed accomplice Houssain al-M.

The new images are militaristic. The 20-year-old German convert is seen in the first film standing in front of a mountain, with a machine gun thrown over his shoulder and wearing an ammunition belt. Abdul al-Gaffar, B.'s nom de guerre, addresses his audience in barely audible and unusually halting German. First of all he praises the suicide attack carried out by Cüneyt Ciftci, the 28-year-old German-born Turk who blew himself up in the Afghan province of Khost at the beginning of March. B. describes this as a "good deed" which sent many infidels "to hell."

A masked man next to him asks him to send a message to his "brothers in Germany." B., who only converted to Islam in 2007, tells the camera: "When you love God and his messengers, then join the jihad, because that is the way to paradise." Those who aren't able to come and fight are asked to help with money or to support the jihadists at the front with prayers. No Muslim should stand by and watch while the "infidels shame our women in our countries and jail and torment our brothers," he says.

The Internet messages are a sign for the German investigators that their worst nightmare could come true. Since the beginning of April, fears have grown that B. and his 23-year-old travelling companion Houssain al-M. have been preparing an attack in Afghanistan or Pakistan. The two men have close ties with the so-called Sauerland Cell who are thought to have been planning a terror attack in Germany.

The two men were spotted in the Pakistani city of Peshawar, near the border with Afghanistan, at the beginning of April. A few days later, the German foreign intelligence service, the Bundesnachrichtendienst (BND), received information that B., at least, was in Kabul.

The investigators called the alarm. The Federal Criminal Police Office (BKA) has now launched a search for the two men. Officials in Kabul have issued large wanted posters -- they were even included in the US army newspaper Stars and Stripes two weeks ago. The concerns about a possible attack were raised by an e-mail B. sent to his family from Peshawar. In it, he said he would not be coming back to Germany but instead would carry out his last mission in combat. The BKA had not received any more information about the two men before the video turned up.

Both men have kept the authorities on their toes for months now. According to information obtained by the BKA, the men travelled to Pakistan via Egypt and Iran in September 2007 and apparently completed training in a terror camp of the Islamic Jihad Union. According to the investigators' internal analysis, al-M. is considered the "leader" and "dominates" the young German. Agents suspect that a third, undisclosed man may be involved in addition to B. and al-M., but have yet to reach a definitive conclusion in that regard.

Both short videos were released on Monday evening on the Turkish-language Islamist Web site "Time of Martyrdom." The Islamic Jihad Union has used the online platform several times in the past to publish messages and terror videos. The video also includes the logo of IJU's media department. The organization, now believed to be based in Pakistan, originated with a group of militant Uzbeki Islamists and has close contacts to al-Qaida, the Taliban and Pakistani jihad groups.

German officials were first alerted about IJU at the end of 2006, when US intelligence agencies warned German security officials that German Islamists in Pakistan had established contact with members of the group. The tip-off led to spectacular arrests in summer 2007 of a terror cell in the Sauerland region of western Germany, where suspects Fritz Gelowicz, Adem Y. and Daniel S. had begun to build explosives for one or more bombs in a holiday apartment.

Pictures at Every EU Entry Point

The IJU showed one more time that it has access to recruits in Germany. In mid-March the group released a statement saying that Cüneyt Cifcti, who was also raised in Germany, had carried out a suicide bombing in the name of the IJU in Afghanistan. Since then the organization has released almost a half-dozen videos showing the attack and Ciftci's final hours. Yesterday the group also released new material about the man, as a sort of testament. Experts are studying the clip now.

Two American soldiers and two Afghans were killed by the Bavarian Islamist on March 3. His guilt is now beyond doubt.

Security officials think of Ciftci as a potential role model for Eric B. and his accomplice from the Saarland. The German has recently appeared without a mask in an IJU propaganda video, something many analysts read as a bad sign. They believe it means either that he's been selected as the next bomber in Afghanistan (or even Germany), or that he's already waiting on a definite mission. Like Ciftci, who was evidently filmed over and over while he trained, Eric B. may be seen as a potential new role model for German converts.

Unlike Ciftci, in any case, Eric B. has not yet announced an attack in any video.

The video has spread worries that it's now just a matter of time before the two German Islamists mount an attack. Their pictures now hang at every European Union entry point, and in all German airports. Officials are also taking steps to try to confiscate al-M.'s German passport. But no one believes these measures will keep any of them from trying to carry out their plan.