Ken Steward flew almost 15,000 kilometers (9,320 miles), from Sydney to Istanbul. He then spent two days relaxing in an Istanbul hotel before taking a six-hour bus trip to the tip of Turkey's Gallipoli peninsula. Now that he has reached his destination, the 76-year-old is standing in a small cemetery at the shore. He removes his cap and says, with a sigh: "So this is where he landed, and this is where it all began."

He is referring to his father's brother, an Australian soldier who, together with 12,000 of his fellow soldiers, jumped from their landing craft along the west coast of Gallipoli on April 25, 1915.

Steward's uncle survived, but thousands of other soldiers died far from home, casualties in the first major war effort of the young Australian nation. Their Turkish adventure ended in disaster. But the commemoration of the event has since undergone an unusual metamorphosis: Today many Australians view the Battle of Gallipoli as evidence of their country's special military capability.

Thousands, including an increasing number of young people, make the annual pilgrimage to the battlefield. In Sydney, Perth and elsewhere in the country, Australians commemorate the anniversary of the landing on Gallipoli with solemn church services, colorful parades and raucous celebrations. April 25 is the country's most important official holiday, and in 2008 a law was passed so that if it falls on a weekend, the following Monday also becomes a national holiday.

The last veteran of Gallipoli died in 2002, but the soldiers who fought in the battle live on as heroes in Australia's collective memory. "The disaster created a sense of identity and a place in the world for our young nation," says Brendan Nelson, director of the Australian War Memorial in Canberra.

The Commonwealth of Australia had only been in existence for 13 years when Great Britain entered the war in 1914 -- and the faraway former colony, as a dominion of Britain, readily lent its support to the Allied cause. Many Australians saw it as a good opportunity to actively fight alongside the British, thereby demonstrating both their independence and their loyalty to the British Commonwealth.

There was no lack of volunteers. Young men with a thirst for adventure crowded into the recruitment offices. A similar situation unfolded in New Zealand, so that within a few weeks a joint army was formed, the Australian and New Zealand Army Corps, or ANZAC.

The first troops were shipped out to Europe in the fall of 1914. Their mission was to assist in the capture of Gallipoli, a long peninsula in the Aegean Sea. Capturing the peninsula would enable the Allies to control the Dardanelles, a strait between Europe and Asia as narrow as 1.4 kilometers (.9 miles).

The strategically significant strait led to Constantinople, or present-day Istanbul, then the capital of the Ottoman Empire. The Allies wanted to force their way into the Black Sea, thereby establishing quick and ice-free access to Russia.

British and French warships had already attempted to break through the Dardanelles in mid-March, but had failed miserably. It was too easy for the Turks to secure the straits with artillery on both sides. They had also installed a dense chain of mines in the water.

The Allies' next step was to attempt a land campaign. Winston Churchill, the First Lord of the Admiralty of the British Empire, had devised the plan. It was a controversial mission, especially as the invading troops would be facing strong enemy forces in inhospitable terrain.

But Churchill prevailed, and British, French, Australian and New Zealand units landed on Gallipoli in the early morning hours of April 25, 1915. The ANZAC troops came ashore in a bay along the west coast.

As a result of either outdated maps or poor navigation, the troops had landed in the wrong place, a few kilometers from their actual target. The invaders had expected gradually sloping terrain, but instead they landed on a narrow strip of sand against steep hillsides leading up to a plateau, where the Ottoman units had taken up their positions.

As the ANZAC troops waded toward the rocky shore or fought their way through thorny brush to the hilltop, the Turks fired on them from above with mortars and rifles. They were forced to entrench themselves and build barricades only a short distance from the shore, while those who had made it farther inland became disoriented in the rugged terrain.

The invading troops made some headway, even while suffering tremendous losses. But the enemy, under the command of Mustafa Kemal, who would later embark on a political career as Atatürk and become the founding father of modern Turkey, prevented them from gaining any significant amount of territory.

The two sides dug themselves into trenches, often only a few meters apart. Sometimes hand grenades were thrown back and forth before fulfilling their deadly mission. Soon there were thousands of bodies lying in the narrow strip of no-man's-land. As on the Western Front, the adversaries persevered for months in grueling trench warfare.

It took the British High Command until December to admit that it couldn't win the campaign. Six days before Christmas Eve, the Allied forces finally began their withdrawal, ending one of the bloodiest and most senseless battles of World War I. Churchill had already resigned from his post by then.

About 130,000 fallen soldiers lie beneath the earth in Gallipoli, including more than 11,000 ANZAC soldiers. They are commemorated in 31 cemeteries and several memorials, in an area that is maintained like a national park.

A Pillar of Australia's Founding Myth

For many people Down Under, it remains unclear to this day that their country's first important military mission was a devastating defeat. And although more Australians died on France's Western Front later in the war, and the Australians also experienced military successes there, the day the ANZAC troops landed on the peninsula in the Aegean Sea is still considered a pillar of the nation's founding myth.

"It's hard to say why Gallipoli has become so important for Australians," says prominent historian and author Jonathan King, "but it certainly has something to do with the heavily censored newspaper reports from the front, which painted the bloody disaster as a brilliant and heroic feat." Domestic gazettes outdid each other in their expressions of patriotism and enthusiasm for the "Diggers," as the soldiers were known. The Sydney Morning Herald celebrated the landing on the Turkish peninsula as the "most glorious act of heroism in this war."

By the time the truth came to light, the many losses were bemoaned and the defeat had to be acknowledged, it was too late. The legend of a glorious military campaign had long since taken hold. By early 1916, the public was seriously debating whether to name Australia's planned new capital Anzac instead of Canberra.

"They died so that we can live in peace," schoolchildren were soon reading in their textbooks. And when multimillionaire Alan Bond's sailing yacht won the America's Cup in 1983, Bond enthusiastically proclaimed: "This is Australia's greatest victory since Gallipoli!" When conservative Prime Minister John Howard visited Australian troops in Iraq in 2004, he told the soldiers: "Your values belong to that great and long tradition that was forged on the beaches of Gallipoli in 1915."

Today hundreds of thousands of people in most Australian cities celebrate April 25 as Anzac Day, an act of national self-assurance. The holiday always begins with the "dawn service," an event filled with addresses, prayers and national hymns that takes place at 4:30 a.m., the same time the troops landed off the Turkish coast. "If you want to understand Australians, watch us on Anzac Day," Prime Minister Julia Gillard said last year.

The festivities will reach a new climax in 2015, the 100th anniversary of the Gallipoli landing. In addition to commemorating those who died in faraway Europe, Australians will also remember the troops that represented the fifth continent in other military campaigns since World War I, from Vietnam to Iraq to Afghanistan.

Almost every community will stage its own festival to mark the event. Streets will be decorated and squares will be named after war heroes. The government in Canberra plans to spend more than €90 million ($124 million) on official acts and state and church services. "The 100th anniversary of Anzac will be one of the most outstanding commemorative events we will ever experience," promises the festival committee in Canberra. "100 Years of Anzac - The Spirit Lives" is the official motto.

The national park on the Gallipoli peninsula is expecting an onslaught of visitors. To avert chaos, Australia, New Zealand and Turkey have agreed to allow only 10,500 people to attend the "dawn service." Tickets will be awarded by ballot, and applications must be submitted by the end of January. 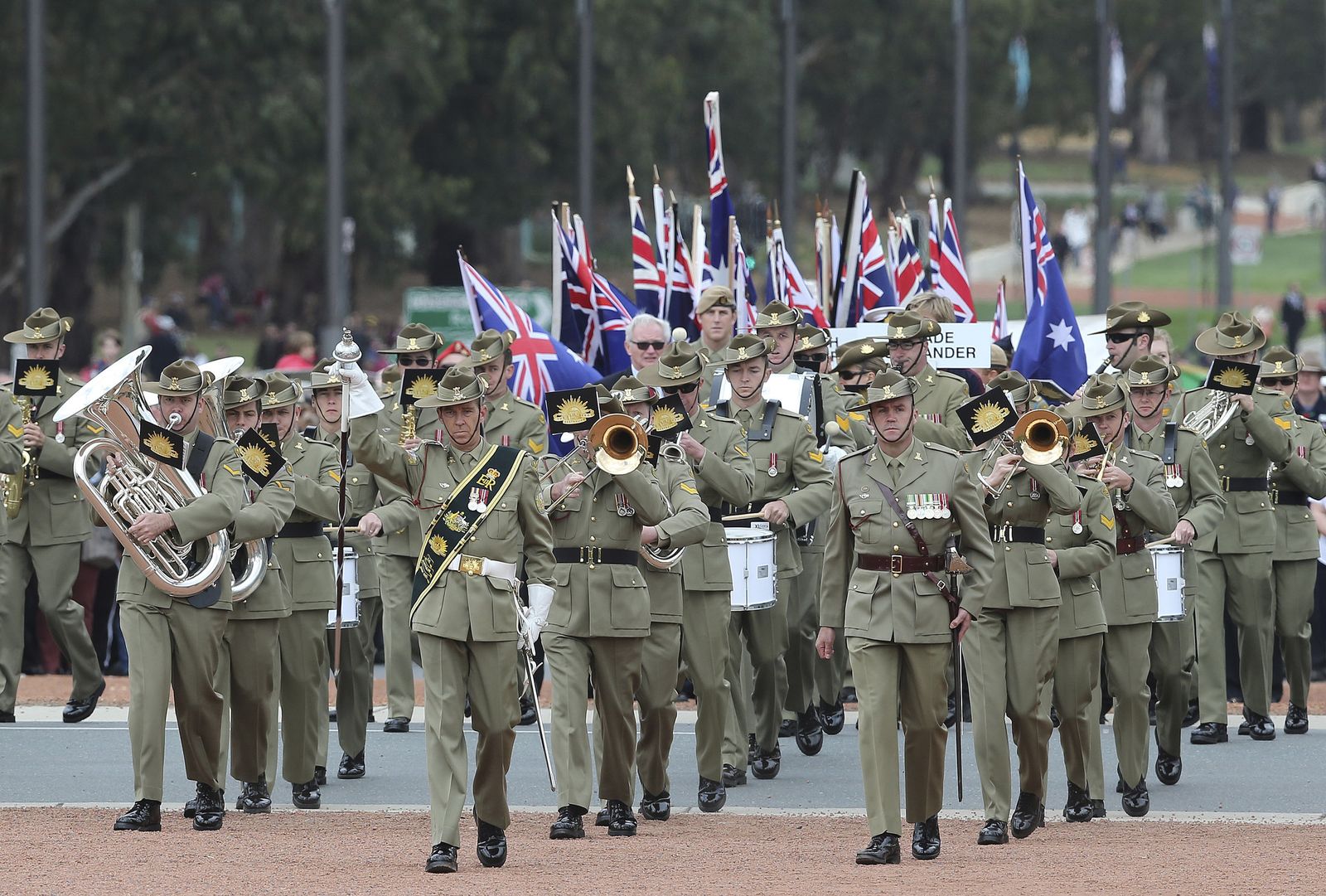 A military band marches onto the parade ground on Anzac Day at the Australian War Memorial in Canberra on April 25, 2014.