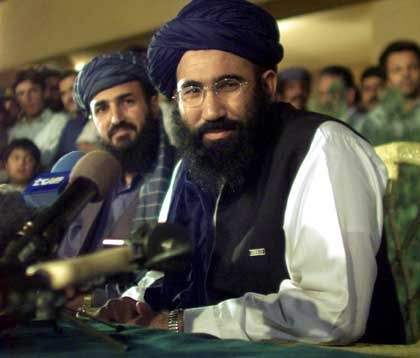 Abdul Salam Zaeef pictured in 2001 before his capture and transfer to Guantanamo.

Zaeef is sitting on a gray plush sofa in a villa in western Kabul. Policemen guard the entrance to the estate, which is surrounded by a high mud-brick wall. A stocky bodyguard stands inside.

The cleric displayed the same contempt for "faranji" or foreigners when he denounced what he called the United States' "war of genocide" in Aghanistan five-and-a-half years ago. Back then, he was standing on the veranda of the Afghan embassy in Islamabad, Pakistan.

It was during the time right after the Sept. 11, 2001 attacks, when the Western superpower, seeking revenge, hunted Osama bin Laden in the mountains of the Hindu Kush and bombed the fundamentalist regime of the Taliban out of power.

"We don't possess any chemical weapons but our morale is even higher than all those who have nuclear bombs," Mullah Zaeef insisted at one of the press conferences he used to hold daily, speaking in his melodic, almost incomprehensible English. Kabul's man in Islamabad was the public face of the Taliban, since there was no footage of Mullah Omar, the one-eyed spiritual leader of the self-described holy warriors.

Bin Laden escaped his pursuers and Mullah Omar went into hiding near Kandahar. The United States is still searching for both of them. Before Mullah Omar disappeared, though, Zaeef asked his leader by phone for final instructions on how to proceed. "I don't know what to do either," Mullah Omar is said to have mumbled: "You have to decide for yourself."

Pakistan made the decision for Zaeef and handed him over to the US military, which wanted to know two things from him: Where was Osama bin Laden, and where was his Afghan friend and son-in-law hiding? Zaeef was unable to answer these questions: "For this was one of the best-kept secrets of the security system. Now, six years later, I know even less than before."

The US suspected Zaeef was trying to obstruct their inquiries, and, by his own account, they made him pay for it -- by beating him, depriving him of food and making him stand at attention naked at night, in the snow at Bagram Air Base. Then came three-and-a-half years in Guantanamo.

Following his release, the cleric  now aged almost 40 -- chose to move to Kabul. Karzai's government is seeking to integrate the so-called "good Taliban" as part of a reconciliation program, offering them incentives. Zaeef -- and his two wives and eight children -- were provided with a handsome guest house, located in the dusty modern neighborhood Khosh Hal Khan. Former Taliban Foreign Minister Wakil Ahmed Muttawakil lives around the corner. Like Zaeef, he was once a confidant of Mullah Omar.

"I'm under total observation, everything is wire-tapped," Zaaef says, explaining the limits to his freedom of speech. This might account for his insistence that he is not in contact with the Taliban fighters who have again become dangerously active in the south of the country. "That would be to my disadvantage here," the cleric says in order to justify this lack of contact. "I've gone through enough already."

But Zaeef has in no way renounced the teachings and attitudes of his former companions. Why shouldn't chopping off hands and the public execution of women in stadiums be acceptable forms of punishment, when those punished are thieves and murderers? Who in the West, he asks, is seriously bothered by the application of sharia laws in Saudi Arabia, a Western ally? "Today we have no sovereignty here, no security, no national unity and stability," the mullah lectures with growing fervor. "Instead we have crime, corruption and foreigners inside the country who behave like an occupying force."

The Afghans must be given the right of self-determination to choose the form of government and society that is appropriate for them, argues Zaeef, a member of the Pashtun ethnic group. "The majority wants the Islamic system," he says. "You'll achieve nothing here by means of violence. Do you want to shoot an entire people dead?"

The former diplomat prefers not to speak about the possibility of the Taliban returning to power. Nor does he make a case for the immediate withdrawal of NATO troops -- perhaps because he fears a replay of the civil war that killed more than 50,000 people in Kabul alone, during the early 1990s.

Zaeef, Muttawakil and other "good Taliban" recently visited Karzai for negotiations. Afterwards, the Afghan president let it be known he didn't trust this man in the black turban.

Zaeef, on the other hand, sees Karzai as a "prisoner" of the United States who is not allowed to act freely. For example, he is not in the position to form a government of national unity whose political breadth would leave room for people like Mullah Omar or the feared warlord Gulbuddin Hekmatyar. Hekmatyar also recently made an offer to engage in talks with the leadership in Kabul.

Zaeef is convinced a unified government supported by all forces in the country could provide the West with the very thing it seems to want most -- "a guarantee that terrorist activities will not be supported from within Afghan territory again." Then the "faranji" could confidently leave the country.