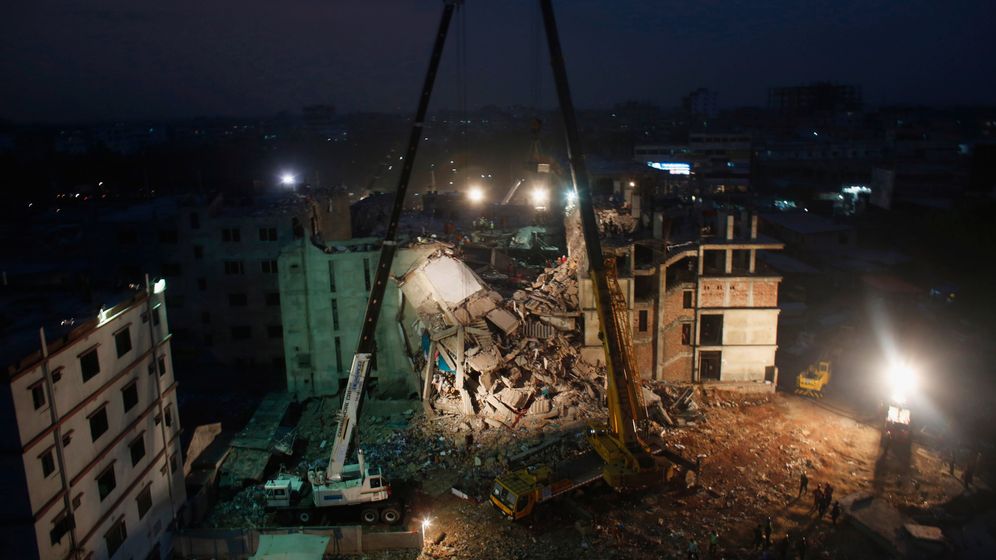 Mushamat Sokina Begum, 27, was at her sewing machine in a fifth-floor factory when the Rana Plaza building where she worked in Savar near the Bangladeshi capital of Dhaka collapsed on the morning of April 24 , killing over 1,000 people. Begum was pulled from the rubble three hours later with an injured leg. She spoke to SPIEGEL ONLINE editor Hasnain Kazim about her hopes for her future and those of her two children.

I don't really want to start working again. Most people here feel the same way. We're afraid. I just heard about another factory where there are cracks in the walls. And I know of another unsound building that's also said to belong to Mohammed Sohel Rana (the owner of the Rana Plaza building). Last week there was another factory fire and people died. Things like this happen constantly. I believe God wants to punish us for something. I just don't know what yet.

Our working conditions are horrible. We basically never get a day off. If there's a death in the family, the bosses say, "Well, there's nothing anyone can do about that. If someone's dead, he's dead. Why do you want to go there? You can't do anything anyway. If you absolutely want to take the day off, then take it. But you won't earn anything that day."

We only get money if we're at the factory. There's no paid vacation. We sometimes work until 11 p.m., always under pressure, always being told we should work faster so the orders are finished on time. We worked late into the night right before the building collapsed, too -- even though many of us have children. When we tell our superiors we want to go home because our children are waiting for us, they say, "Why are you even coming to work if you have children? Stay at home and take care of them! But if you want children, you can't work for us!" We hear comments like that all the time.

And then there's the unbearable heat! In the room where I worked there were just four small air conditioning units for several hundred people. We kept asking when they would at least buy fans. The managers answered, "Production isn't going well. If we make a profit, then we'll be able to buy fans. Work harder, then we can talk about it."

That's how things were at our company, which I think was called Ether Tex. The name is written on my employee card, in English. But I can't read or write, so I don't remember the name. I'd only been with the company a couple of weeks.

Working conditions in our industry are bad. It wasn't really clean in our factory. Many of the workers smoked and cooked, even though they weren't supposed to. There was a garbage dump behind the building and it stank. There are always people watching over us. They scold us when we have to go to the bathroom. They're there all the time and we're not allowed to take any breaks, not even to go over to the window for a moment and take a few breaths of fresh air. Now and then they'll slap one of us.

'I Don't Want to Complain'

We put up with all of this. I don't want to complain -- we earn enough to get by. The factory owners are rich and they invest a lot of money in the machines. We're just poor workers. We live how we can afford to live. We don't have a choice. Why should I be envious of rich people? I don't expect to be rich one day.

But we should at least receive our wages on time. Unfortunately, many of the factory owners pay late. Then we go on strike, sometimes for several weeks at a time. Why should we work if we don't get any money? We have to pay our rent by the 10th of each month. That's hard to do when we don't get our pay.

We haven't gotten anything for the month of April and now that the factory no longer exists, no one knows whether we'll ever get the money. So far I haven't seen any representative of the company offering us our wages or any compensation.

Like all the women at the factory, I worked from 8 a.m. to 5 p.m. I earned 4,000 taka (about €39 or $51) a month. After 5 p.m. we were paid overtime of 27 taka (€0.26) an hour. All together, my monthly salary could be up to 5,500 taka (€53). I don't feel any anger toward the foreign textile and trading companies. They place the orders and pay money for them, and a bit of that money comes to us. It would be terrible if the orders stopped coming and the factories closed. How would we make a living then? We have large families, and we want to send our children to school. We need jobs.

Life in a big city like Dhaka is unbelievably expensive. Rent is very high. Four of us live in one room: my husband and I and our two sons, 11 and nine years old. We pay 1,850 taka (€18) a month for the room. My children sleep on the floor, my husband and I have a bed. There's a shared kitchen with two ovens on our floor. There are also two toilets in the hall and one bathroom for everyone.

On our floor, all together there are seven families living in eight rooms. The owners live in two rooms and the other six are rented. There's running water, gas and electricity. I like our room. A room of their own for my sons wouldn't be bad, of course, but how can we afford that? My children go to school and that costs 500 taka (€4.80) a month per child, plus the school materials. Education is more important than a second room. My husband drives a bicycle rickshaw, transporting goods. He doesn't earn much.

'I Have No Expectations for the Future'

We women have few choices aside from the textile industry. Of course the accidents scare us. I know many people who say: We'd rather live back in the village again and earn nothing, than to go to our deaths in the city factories. In my factory, which was on the fifth floor, there were only three exits. Two of them were always closed. The other factories where I'd worked before weren't any better. We often complained and asked, "What if there's a fire?" But they didn't care. The improvements we wanted were little things -- more space in the factory rooms, fans, more exits and stairs. And to be treated fairly.

Personally, I have no expectations for the future. What should we workers hope for? Everything depends on the whims of the factory owners. For example, it only takes a little bit of rain before there's mud and water half a meter high. How often did we tell the managers they had to do something? We arrive at work soaking wet and get sick. They promised us they would take care of it. But of course nothing changed.

It would be nice to have my own sewing machine. That would be a way of ensuring my livelihood. Then I could take on orders and work from home -- I know women who do that. But I can't afford a sewing machine. My husband's salary isn't anywhere near enough. I'd like to earn enough to pay for my children's education. I want to make a better future possible for them. They shouldn't have to work in the textile industry, or drive a rickshaw like my husband. So I need to find a job, because otherwise my sons will have to work and they won't be able to go to school, which means they'll never find good jobs. That's my greatest worry.

I want my children to have fewer worries than my husband and I do. We're not educated. I only went to school for a very short time. Far too short. I want to protect my sons from the same fate. Best of all would be if they could find jobs in the government.

The person I blame most for this whole calamity is the building owner, Sohel Rana. He didn't have a permit to build such a high building. He was in the building himself on the day it collapsed. He miraculously survived, but instead of helping rescue others, he just disappeared. That's something I would like to ask him: Why did you leave? Other people in the neighborhood, people with no connection to the building, came and helped.

The day of the catastrophe didn't start well for me. My father had fallen ill during the night, so ill that we had to take him to the hospital. I was ill as well. But I had no choice but to go to work, because they had threatened not to pay me if I didn't.

That morning, before the building collapsed, a lot of people were standing out front. No one dared to go in. Everyone had this gut feeling that it was dangerous. Around 8:10 a.m., the managers came and ordered us to get to work. They said we shouldn't worry, everything was safe. "We're here too," they said, and told us there were a lot of orders and we were under considerable time pressure. I had turned on my sewing machine when the building caved in behind me. I ran toward the exit, but the floor fell away under my feet. All of a sudden I was buried up to my hips in a pile of concrete.

But if we hadn't gone upstairs to the factory, we would have lost our jobs. So we obeyed.