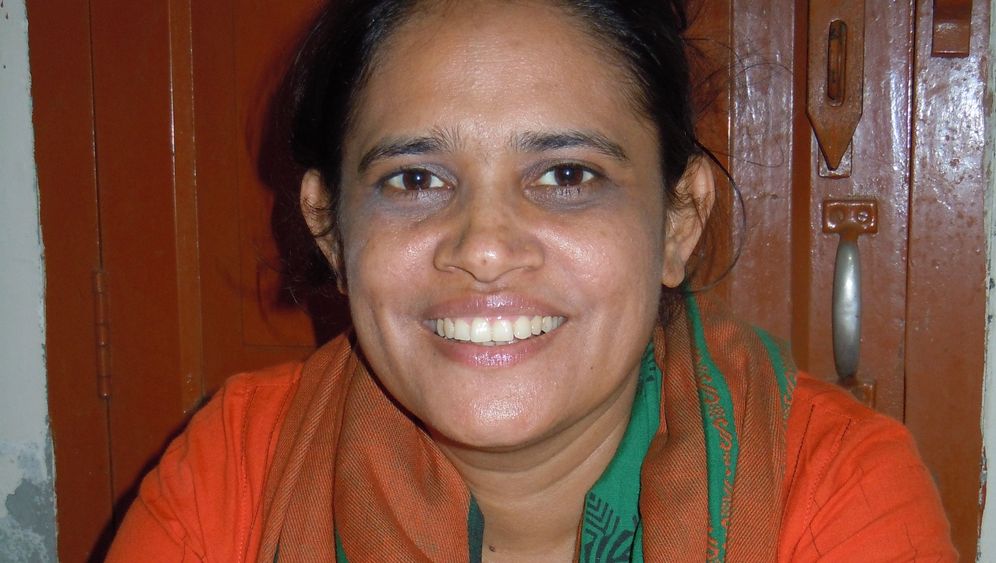 At the age of 11, Nazma Akhter started work in a garment factory in Dhaka, Bangladesh. At 14, she was beaten up by hired thugs and tear-gassed by the police when she joined fellow garment workers in a protest against working conditions in her factory. Today, 39-year-old Akhter is one of the most respected and influential labor leaders in Bangladesh.

Akhter recently flew to Germany for an appearance on a leading national television talk show to discuss the collapse of the Rana Plaza building near Dhaka in April. Some 1,129 people perished in the disaster, and it prompted an intense international debate about precarious working conditions in the Bangladeshi garment sector, which is the third largest supplier of clothing in Europe. After asking her a few basic questions, host Günther Jauch -- who is also the face of the country's "Who Wants To Be a Millionaire" franchise -- left her to languish on the sidelines while his German "experts" analyzed the situation in her country and whether or not Germans should buy clothes "Made in Bangladesh."

If Jauch had bothered to include Akhter, she could have provided a great deal of insight that would likely have surprised his viewers and injected new ideas into an otherwise predictable discussion. The subject of Bangladesh's textile industry and its relationship with global capitalism, argues Akhter, is much more nuanced than the way it is largely being portrayed in the West. If worker conditions can be addressed, she says, the garment factories present a unique opportunity to move women from the margins to the center of Bangladeshi society.

'When a Woman Knows Her Rights, She Can Demand Them'

For starters, Akhter has absolutely no patience for campaigns that target certain Western companies. "Garment workers earn the same salary regardless of whether the factory is supplying a discounter like KIK, Lidl, Aldi or Primark or a high end brand like NIKE or Hugo Boss," she says. "A campaign against a few companies doesn't help. Western consumers should pressure all the brands."

Akhter set up the Aware Women's Action for Justice Foundation, widely known as the Awaj Foundation, in 2003 in order to educate female garment workers about their rights. Today she serves as executive director of the labor rights organization. "You have to understand," she explains, "most of these women come from the countryside. This is their opportunity. But they don't know that they have rights, so they cannot say anything. But when a woman garment worker knows her rights, she can demand them from the factory."

In addition to teaching women their basic rights, the Awaj Foundation also works together with major clothing companies to improve their practices in Bangladesh. Since 2008, for example, Akhter and her colleagues have worked closely together with German discount clothing chain KIK to provide health care to garment workers. The company has been a lightning rod for criticismabout the conditions for workers in the companies it contracts to produce its dirt cheap clothing, and working with the Awaj Foundation has provided it with a needed opportunity to burnish its image.

The Awaj Foundation receives significant funding from the German government through GIZ, the German development organization, as well as a number of respected international organizations for a variety of projects to train and assist garment workers.

In 2005, GIZ helped Akhter set up and furnish her offices and worked with her to develop labor rights and leadership training programs and legal services.

GIZ's program officer in Dhaka, Shatil Ara, developed a plan for "women's cafés," where tired garment workers could stop off after work for a cup of tea. Ara says the idea was borne of her own intense frustration as a young woman in Bangladesh. According to the traditional norms of purdah, the country's social and religious custom of secluding women, she was confined to home or school while her brothers were free to roam the streets and sit at tea stalls.

Today, the Awaj Foundation has a staff of 37 and 18 women's cafés. The cafés, which are located in the slums near the garment factories, are open every day of the week and buzz with activity. Women drink tea, eat snacks and learn about their labor rights, through an ingenious educational board game designed by Ara or through formal instruction by one of the foundation's 10 trainers.

Since 2005, the Awaj Foundation has used these programs to educate tens of thousands of garment workers. At the same time, the trainers keep their eyes peeled for women who could serve as peer educators and factory floor cell leaders. This latter group of women are given additional training in labor law, communication, negotiation and leadership. The Awaj Foundation today has over 75,000 members, and its cell leaders have helped settle thousands of disputes on issues such as wages, overtime, holidays and maternity leave in hundreds of factories.

When the cell leaders fail to reach an agreement with factory managers, Awaj's legal aid program swings into action. Three full-time lawyers file around 50 new cases each month. They spend their weekdays in court and meet with garment workers on the weekends. The lawyers have counselled over 17,000 workers since 2005, and the foundation, by its own account, has achieved the reinstatement of 1,110 workers who were improperly dismissed in their previous jobs.

Akhter's work has even attracted the attention of politicians in Germany. This week, the labor activist received a visit from Renate Künast, the head of the Green Party's parliamentary group. "The Awaj Foundation's work is very important, because it is only through stronger union organization that Bangladesh's textiles industry will be able to push through the right to fair working conditions and appropriate wages," Künast says. "But the EU and Germany also need to finally live up to their responsibility as (Bangladesh's) leading trading partner." Künast has called for continued trading priviliges the EU bestows on Bangladesh to be linked to fair working conditions.

In addition to her work at the Awaj Foundation, Akhter is also president of the Combined Garment Workers Federation, one of over 50 labor union federations in Bangladesh's garment sector.

Labor activists continue to face brutal repression from factory owners and the police, as Akhter did in the early 1990s. "Our entrepreneurs and the government have been very slow to accept that labor unions are necessary," says Akhter. "But the labor unions themselves have not helped. There are too many federations -- and they compete for workers in the same factory." She also laments a lack of unity within the unions and an overemphasis on politics within the labor movement.

Furthermore, the unions are heavily male dominated and the male leaders do not understand or address the needs of female garment workers. Women workers have a double work load: they cook, clean, do the laundry, take care of their children. Then they go to the factory. They need child care facilities -- a service that less than 500 of the factories offer. When they get home, there is more work to do. Domestic violence is a big issue.

Most live in very poor conditions. Although wages in the garment sector are comparable to wages in the rest of the economy, the constant stream of garment workers from the countryside to the cities of Dhaka and Chittagong has made affordable housing a critical problem. It is not unusual for workers to pay over half their salary for a few square meters in which to sleep and eat. And it is also not unusual for landlords to raise the rent as soon as a garment worker gets a salary increase.

Women are more malnourished than men -- and this applies everywhere in Bangladesh, not just in the factories. The garment workers pay the rent, buy clothes and support their children and their parents, so they skimp on food for themselves. They are tired and underfed, so they get sick. When they are 40, they do not have the strength to continue working in the factory. But they have very little savings, because they have sent any extra they had to the village for their children and parents.

Nevertheless, Akhter insists that the readymade garment industry still represents an important opportunity for Bangladeshi women and progress for the country. She is adamant that the readymade garment sector is absolutely crucial for the well-being and empowerment of women in Bangladesh. "It is good that women have this job opportunity and are coming from the countryside. There is now less dowry, less early marriage. Women are gaining independence. They work at night, they move around the city, and make their own decisions. They support their children and their old parents in the villages. All of this is a very positive sign for our country."

The single greatest source of foreign currency in Bangladesh is the export of clothing. The sector employs around 3.5 million workers, of which around 80 percent are women. On average, the women earn between €35 and €40 per month. Pressure from groups like Akhter's have helped to ensure in recent years that these wages are steadily growing. Often, women who work in the factories are the bread winners in their families, making up to twice as much as men.

Akhter views her cell leaders as the foundation of a new kind of labor movement in the garment sector. Her Combined Garment Workers Federation has around 30,000 members. But through its cell leaders, Awaj has a network of around 400,000 workers. And both organizations are growing: "We are gaining many more members today. We are optimistic that the government will ease restrictions on labor union formation and that this will be very good for our country, in the short, medium, and long term."

After the Rana Plaza disaster, Akhter was also invited to speak on a number of Bangladeshi talk shows. Unlike her experience on Günther Jauch's show in Germany, in Bangladesh she got a chance to say what was on her mind. In one particularly acclaimed appearance, she lashed out at the profit mongering, corruption, and political posturing of the elites in her country.

"We don't do politics," she insisted, "We earn our livelihood by hard labor." While politicians "are continually quarrelling" and entrepreneurs "are building factories to make quick money," garment workers are "earning their bread and butter through hard work and are making garments in Bangladesh that are famous throughout the world."