Salma Akhter first heard about the virus at the textile factory where she worked. She was sitting at her machine on the second floor, sewing zippers onto pants. "Wash your hands with soap," she remembers one of her supervisors announcing over a loudspeaker. "A virus from China has arrived in Bangladesh."

Soon the workers received additional warnings. Don't take off your masks while at the factory, Akhter and the others were told. They were also sprayed with disinfectant before their shifts. But it wasn't until March 26 that the 24-year-old Akhter felt the consequences of the pandemic first-hand when her factory closed down. A few weeks later, she was informed via text message that she had been laid off.

She is sitting on her bed in her two-room apartment, a face mask with a floral pattern hanging from her headscarf. She has almost no savings. "How are we supposed to survive now?" she asks. "I have to pay my rent. We have to eat."

Akhter lives in Gazipur, an industrial city with more than a million inhabitants and hundreds of textile factories. Tens of thousands of seamstresses work here, sewing wares for companies around the world, including in Germany. Their low salaries would never pass muster in Europe.

For many years, Bangladesh lived from the promises of globalization in its simplest form: Rich countries had access to cheap goods while people in poor countries received an income in return. But ever since the arrival of the coronavirus, this arrangement has been put on ice.

In much of Europe, the shopping streets were deserted for weeks and have only just now started to hesitantly open up again, with clothing stores only allowed to let a limited number of people inside at a time. As the industry continues to grapple with revenue losses and layoffs, much of the economic pressure has been passed far down the line. In Bangladesh alone, foreign companies have cancelled or put on hold orders worth 3 billion euros ($3.3 billion) in recent weeks. These include textile giants like Primark, C&A and the Spanish company Inditex, which owns Zara. Akhter sewed hems and zippers for Inditex.

Even those companies that have remained loyal to their suppliers may not be able to order as much from abroad in the future. In countries that are relaxing their lockdowns, demand has been slow to pick up. People may be allowed to go shopping again, but many still seem to be wary of going out. And many others may not be able to afford it: More than 10 million workers in Germany have had their hours reduced, while in excess of 38 million unemployment claims have been filed in the U.S. in the past nine weeks.

Less Than 105 Euros a Month

But across supply chains, it's the weakest who have been hit the hardest. Women like Akhter. Roughly a quarter of the 4 million textile workers in Bangladesh have lost their jobs in recent weeks, while hundreds of thousands of workers in textile factories in Cambodia, Myanmar and India have met a similar fate.

For Alexander Kohnstamm, director of the Fair Wear Foundation, the crisis has revealed a fundamental problem in the global textile industry. "Too many in the industry have relied on a business model that relies on high volumes and small margins. Now there are no reserves to survive the crisis," he says. This applies to large clothing chains in Europe just as it does to factory owners in Bangladesh, and it is the workers who suffer the most. Unlike employees in Germany, they have no personal savings or welfare to fall back on.

Khondaker Golam Moazzem has a similar view of the situation. Moazzem is the academic director of the Center for Policy Dialogue think tank in Dhaka, the Bangladeshi capital. "Most textile workers are in serious financial trouble right now. They will be dependent on government food parcels," he says.

Akhter, for instance, received her last wages, paid in cash, in mid-April, a total of 9,800 taka, or just under 105 euros. That's minimum wage, but it's only just enough to pay for rent and food, and she has almost no savings. "We barely have money for soap to protect ourselves at home," she says. A hunk of soap costs 40 taka, or about 40 euro cents.

The German Ministry for Economic Cooperation and Development has called on companies to "meet your responsibility to suppliers' employees and along the entire supply chain, even during the crisis." Companies like Otto and Tchibo have pledged to take part in an aid package from the German government for textile manufacturers, a ministry spokesperson said recently. The aim is to help companies change their production over to making face masks. The ministry is also in talks with the Bangladeshi government to help it with a national aid program that would allow wages to continue to be paid to workers in the textile sector. The government of Prime Minister Sheikh Hasina already promised factory owners nearly $590 million (541 million euros) in federal aid in late March so that they could keep paying their workers. But those payments didn't have the desired effect. According to a survey conducted by BRAC University in Dhaka, roughly half of all workers did not receive their wages in the first two weeks of April.

The textile industry has been a source of significant suffering in Bangladesh in the past. Seven years ago, the Rana Plaza building collapsed, killing more than a thousand people, most of them seamstresses. But the factories have also brought new prosperity to the country, with many of the social advances that have been made recently traceable back to the textile industry.

Women in particular have been able to find work and a sense of empowerment -- indeed, women in Bangladesh today work just as much as men. Furthermore, the fertility rate has fallen from six to just over two, while average life expectancy has jumped from 53 to 72. At the same time, Bangladesh is one of the few developing countries in which more girls go to school than boys.

"Single mothers and housewives have found work in the textile industry. This work has changed our lives," says Akhter. "If the factories close, all these women will die without food."

Bangladesh's textile industry is now the second largest in the world, after China's. The industry recently generated sales of around $40 billion, accounting for 84 percent of the country's total exports and 13 percent of its gross domestic product. It's not an exaggeration to say that the sector is the engine of the Bangladeshi economy. And recently, that economy had been growing at an annual rate of 8 percent. This year, though, it could grow only 2 percent, according to a World Bank forecast, with the lockdown that Bangladesh imposed to curb the spread of the SARS-CoV-2 virus further exacerbating the fragile situation. Hunger and unemployment have increased, while diseases that would otherwise be easy to treat are on the rise.

Moazzem, the economist, believes it is possible "that the textile industry will recover in six months to a year." That's how it was during the financial crisis. Back then, global demand for cheap textiles bounced back after just a brief interlude -- as did production in Bangladesh.

But for that to happen again, Bangladesh must be able to do exactly that: produce. To stop the spread of the new coronavirus, all factories had to close down temporarily. Now, even though demand is low, many owners believe they can't afford to keep their factories closed. Textile manufacturers in countries like Vietnam and China, which for the moment appear to have put the worst of the pandemic behind them, are once again attracting customers, leading Bangladeshi company owners to worry about what Fair Wear manager Kohnstamm refers to as the "travelling circus" -- corporations that move from one country to the next in search of the lowest prices.

Bangladeshi authorities even issued a call to the more than 4,000 factories in the country to reopen as soon as possible. The Bangladesh Garment Manufacturers and Exporters Association (BGMEA) has issued guidelines to ensure workers' safety during the pandemic, calling on seamstresses to keep their distance from each other, wear face masks and wash their hands regularly. But Kohnstamm says the question is: "Will the new standards be obeyed?"

Factory owners who are under financial pressure could decide that safety is something they can't -- or simply don't want to -- afford, and they likely don't have to worry about consequences. No one is going around checking whether factories are following safety protocols, after all, since such inspections are currently prohibited due to the government's concern that inspectors who don't know they have the virus could transmit it from factory to factory.

BGMEA President Rubana Huq called the situation a "brutal dilemma." If the factories remain closed, people could literally starve to death. But if the factories open, people would also be in danger of dying. Many of the coronavirus infections seen in the country have been concentrated in the slums that surround the factories.

Workers like Akhter are more afraid of a future without work than they are of getting sick. Meanwhile, the courtyard that Akhter shares with eight other families is an ideal place for an infection to spread. Around 30 people share two kitchens and two toilets. Neighbors hang their clothes up to dry in the courtyard too.

Akhter, who is 24, has worked in the textile industry since she was 16. Normally, it wouldn't be difficult for someone like her, with all her experience and skill, to find a new job, she says. "But who's hiring now?"

But now that the factories are reopening, she still wants to try. 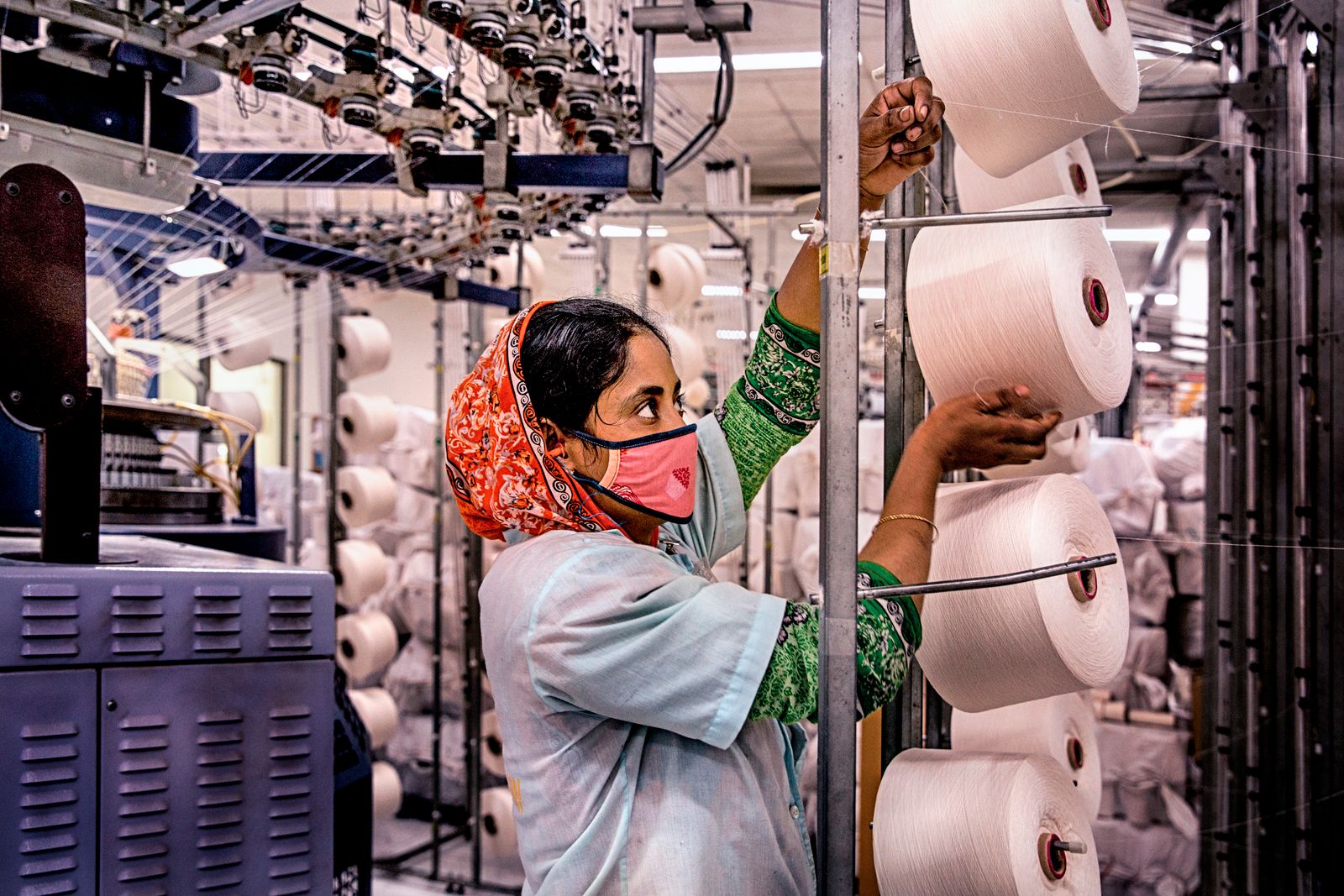 A textile worker in Tongi, Bangladesh: Orders worth billions were cancelled.