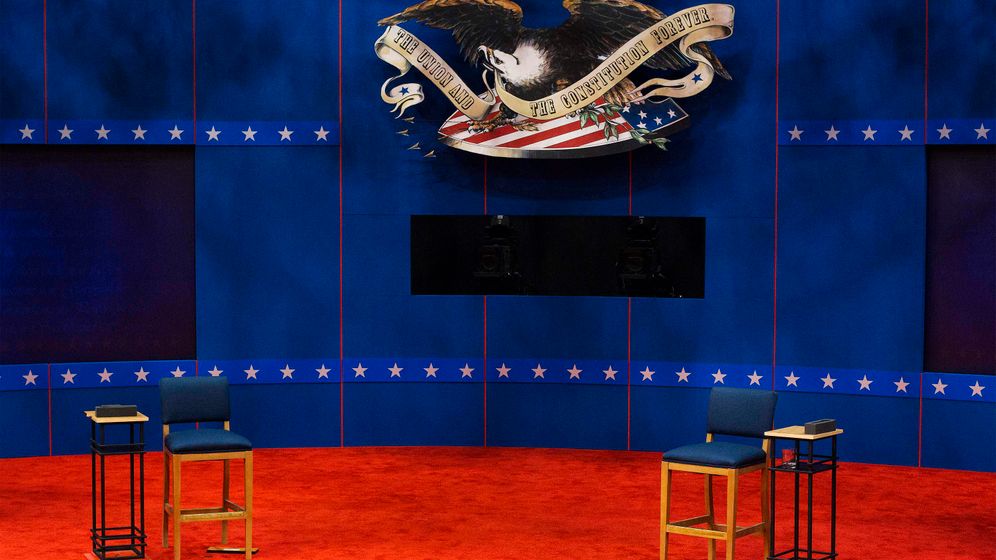 On Tuesday evening in America, there were two different Mitt Romneys on display. One Romney stood on the stage at Hofstra University in Hempstead, New York for the televised debate with President Barack Obama, watched by a TV audience of 60 million. The other appeared in campaign spots both before and after the debate, in the endless attack ads that the Obama campaign has been airing for months.

The president's campaign team believe they have managed to tame the first Romney. Seldom has a sitting US president been so determined going into a campaign debate. After his debacle in the first debate in Denver, an advisor must have mustered the necessary courage to tell the most powerful man in the world that in a live debate, it doesn't hurt to show a little life.

From the first minute onwards, Obama reproached his rival for being untruthful and deceptive. He blasted the Republican candidate for promising a tax model that can't possibly work. He accused him of criticizing China even as he has been active in the country as a private investor. And he attacked him for trying to attract female voters even as he intends to treat them unfairly on the labor market.

In short, the president meticulously laid out why he believes that Willard Mitt Romney is an untrustworthy, perhaps even a brazen, politician. Obama made clear that he sees Romney as little more than average. Even conservative Washington Post columnist Charles Krauthammer, speaking to Fox News, said that "on points, Obama came out ahead."

But the president has a problem. The Mitt Romney that he vanquished in Hempstead has little to do with the Romney in the attack ads aired by the Democrats. In the spots, Obama's campaign team doesn't portray him as Mr. Average. Rather, he is depicted as Mr. Monster.

In the ads, they indirectly accuse the Republican of having stopped at nothing when buying and selling companies as the head of Bain Capital. They accuse him of being a cynical politician who simply ignores the concerns of half of the electorate and sees nothing wrong with paying a lower tax rate than the average secretary. They portray him as a hypocrite who belts out "America the Beautiful" while bunkering his millions in tax havens around the globe.

But did Obama present this Romney on the stage in Hampstead? No, and that is his greatest failure. When Romney, worth an estimated $250 million, dodged the question as to why he thought his lower tax rate was justified, the president didn't follow up. He failed to land a blow aimed at Romney's car elevator in his beach-front home in La Jolla, California, or at the sinfully expensive dressage horse belonging to his wife Ann. He even waited until the very end to mention the secretly taped video in which Romney seems to accuse 47 percent of the American population of being lazy.

This Romney, the evil candidate from the campaign ads, was not unmasked on Tuesday night.

Whereas Obama may have won "on points," he didn't follow his campaign's plan of attack. Early on, it was clear to the president that he couldn't win re-election on the strength of his White House accomplishments alone -- his record is simply too mixed. Instead, his advisors are determined to "frame" Romney, to paint an image of him as an ice-cold capitalist who can't be trusted by average Americans.

It is a strategy that George W. Bush pursued to perfection in 2004. Even then, he was unpopular, but his Democratic challenger John Kerry couldn't capitalize because the Bush campaign was successful in painting him as a "flip-flopper."

During the campaign, Bush stayed on message, even in the debates. But Obama seems to be veering back and forth. In the first televised debate, he didn't come close to presenting Romney as Mr. Monster, in the second he did so only half-heartedly. If Obama had kept true to the kinds of attacks aired in his ads, the public would have come away wondering if Romney was indeed cold-hearted, the candidate of the 0.1 percent who would divide America.

There is plenty of room for doubt as to whether Romney would have had good answers to such an onslaught. As it was, he wobbled several times, when discussing US policy in Libya, for example. But without a constantly attacking Obama, Romney had plenty of time to accuse the president of not doing enough for economic growth and, more importantly, to present himself as being the opposite of cold. And the more often Romney can do that, the more Americans will warm up to him.

There is an historical parallel for that scenario too. In the 1980 campaign, the Democratic incumbent Jimmy Carter was in trouble. Gas prices were rising, the unemployment rate was on the upswing as well and US hostages were imprisoned in Iran. Nevertheless, Carter was slightly ahead in the polls until the very end because many Americans didn't trust Ronald Reagan, who Carter's campaign tirelessly portrayed as an unpredictable Cold Warrior. But in televised debates, Reagan came across as harmless, in contrast to the image Carter's ads painted. And Reagan ended up winning in a landslide.

That isn't likely to be the outcome when Americans go to the polls on Nov. 6. Obama is a stronger president than Carter was and Romney is a weaker candidate than Reagan. The margin on election night will be razor thin. Partly, that is because Romney has the easier task. He doesn't have to present himself as a new political messiah, as the second-coming of the candidate Obama. For Romney, refraining from frightening the electorate could be enough. 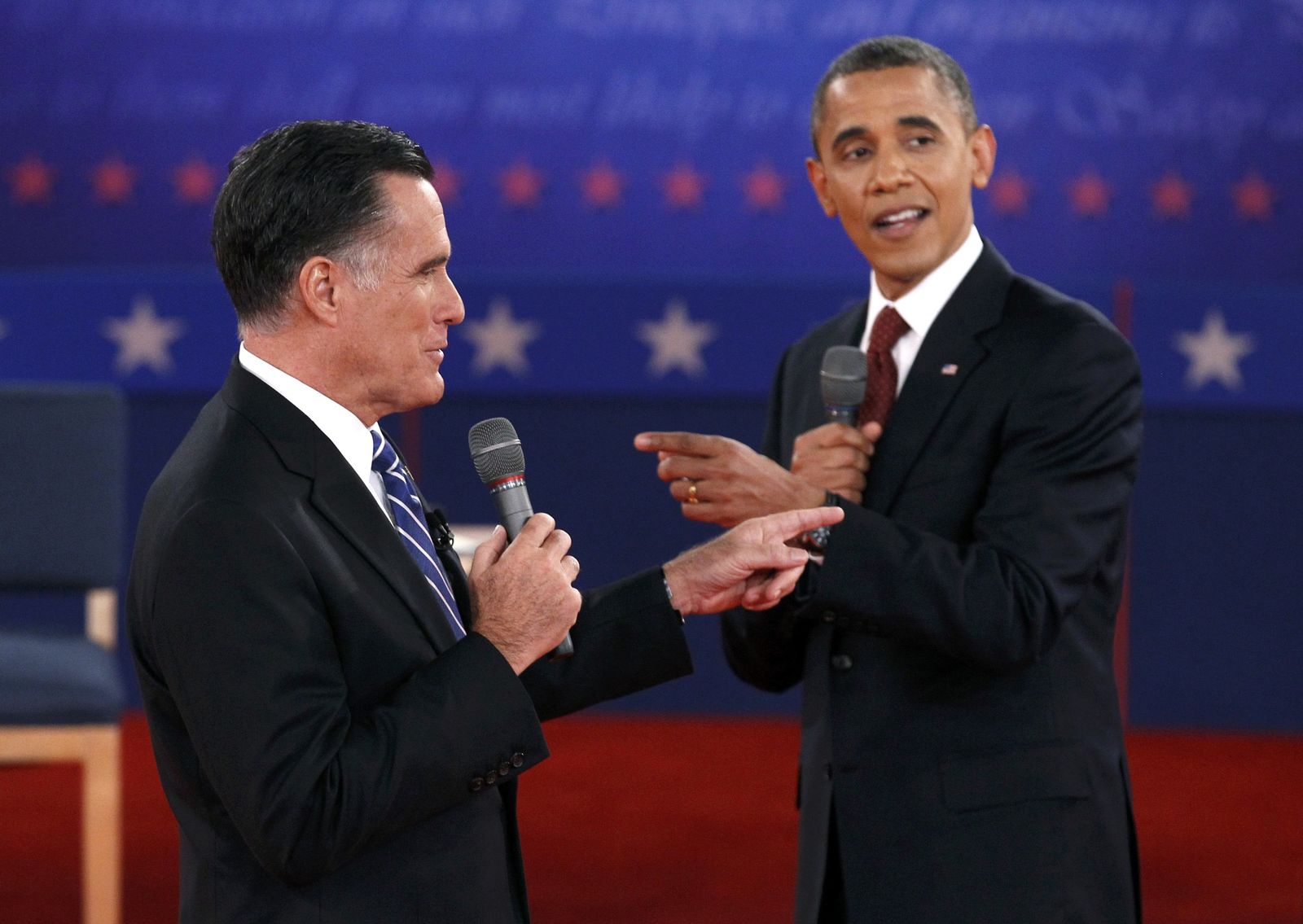 Obama abandoned the aloof bearing he cultivated in the first debate and jumped into the trenches, accusing Romney of not telling the truth on numerous occassions.