Former German Chancellor Gerhard Schröder is hardly a popular figure in Germany these days. His own party, the Social Democrats, has distanced itself from the reforms he made to the country's welfare system. And his decision to take a post-Chancellery job with a company owned by the Russian state-owned fossil fuels firm Gazprom has been widely criticized.

This week, however, he seems to have nothing but friends. Ever since former US President George W. Bush's memoir hit the bookshelves, former German government officials have joined Schröder in questioning the veracity of Bush's portrayal of Germany's position in the run-up to the Iraq invasion.

Indeed, one official, Schröder's former spokesman, has even gone so far as to question Bush's intelligence.

"We noticed that the intellectual level of the (US president) was exceedingly limited," Uwe-Karsten Heye, Schröder's former government spokesman, told the television news station N24 on Wednesday in reference to Bush. "As such, it was difficult for us to communicate with him."

'Fixated on Being a Texan'

Heye continued: "He had no idea about what was going on in the world. He was so fixated on being a Texan. I think he knew every longhorn in Texas."

Heye's comments come just two days after Schröder himself accused Bush of not telling the truth in his memoirs, "Decision Points," which hit the shelves on Tuesday. In particular, Schröder takes Bush to task for his interpretation of a Jan. 31, 2002 meeting in the White House. Bush says that Schröder offered him support on Iraq.

Bush wrote that, when he told Schröder he would pursue diplomacy against Iraq but would use military force should the need arise, the German leader responded, "'What is true of Afghanistan is true of Iraq. Nations that sponsor terror must face consequences. If you make it fast and make it decisive, I will be with you.'"

Bush continued: "I took that as a statement of support. But when the German election arrived later that year, Schröder had a different take. He denounced the possibility of force against Iraq."

The former US president, Schröder said on Tuesday, "is not telling the truth." He claims he told Bush that, were there a demonstrable link between al-Qaida and Iraq, the US would have Germany's full support. "The connection, however, as it became clear during 2002, was false and constructed," Schröder said.

'Not a Free Pass'

Two additional former German officials have supported Schröder's version of the story this week. Speaking to the Berlin daily Tagesspiegel, Wolfgang Ischinger, who was the German ambassador in Washington during Schröder's chancellery, said "nobody could have interpreted the meeting as a German blank check for military action against Iraq."

Dieter Kastrup, Schröder's foreign policy advisor, added: "Schröder expressed himself in such a way that could not have been understood by Bush as a free pass to start a war against Iraq with German assistance."

The fact that the two leaders didn't like each other was no secret, even when the two were in office. Heye insisted in the autumn of 2002 that "there are no problems in the German-American relationship. There are just differences of opinion on an issue."

Even by then, however, the ice age between Bush and Schröder had begun in earnest -- particularly after Schröder made his opposition to the Iraq invasion a major plank of his re-election campaign in 2002.

"As someone who valued personal diplomacy, I put a high premium on trust," Bush wrote in his book. "Once that trust was violated, it was hard to have a constructive relationship again." 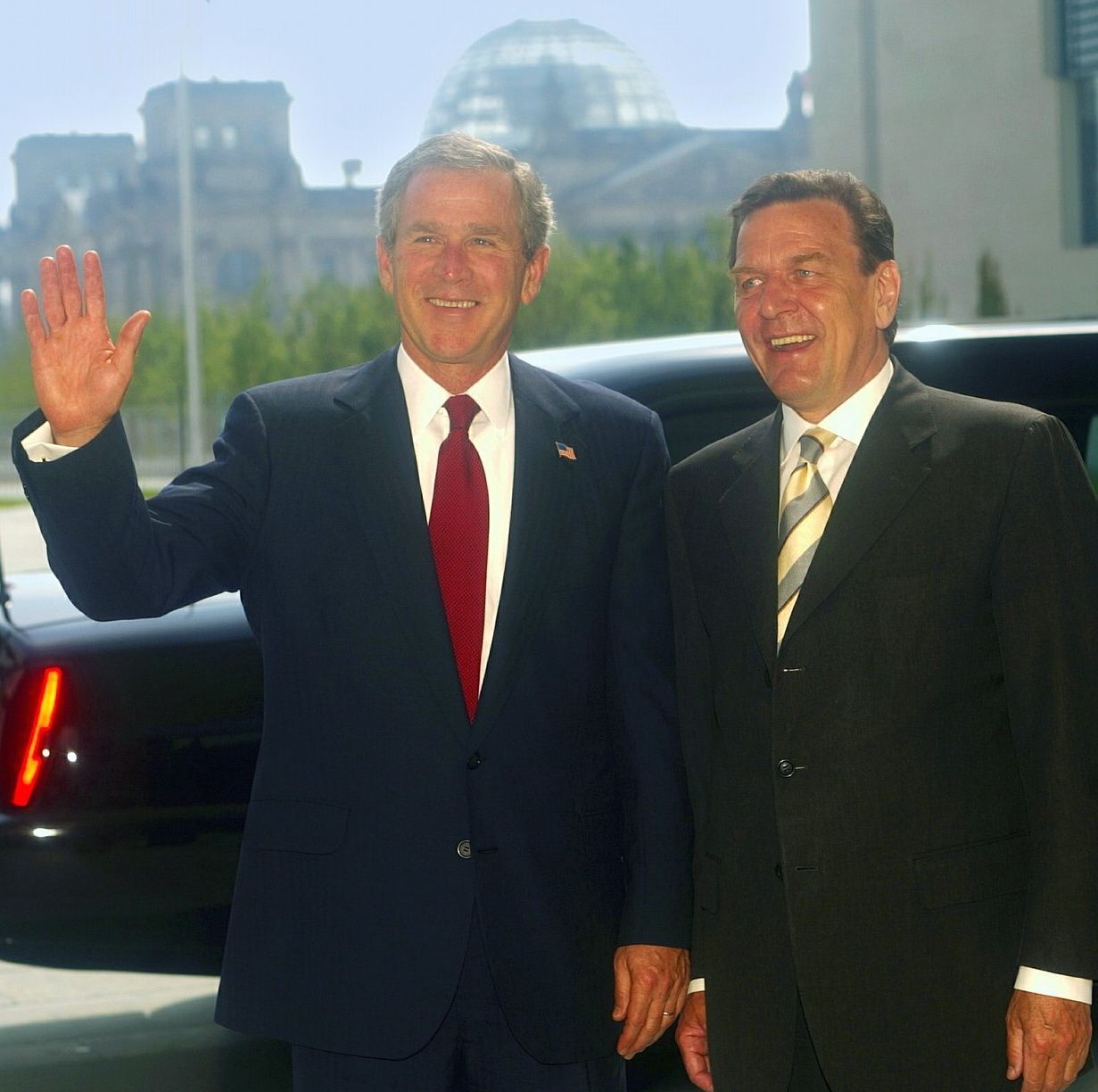 US President George W. Bush and German Chancellor Gerhard Schröder in the Berlin Chancellery in May 2002.