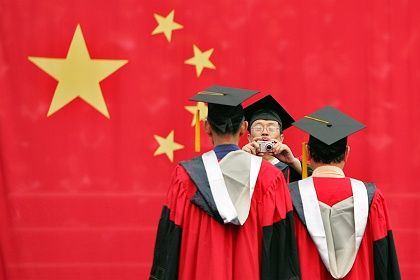 It's a foggy morning on the Beijing Normal University campus and eight students are lined up on a small street. "One, two, three, join the student union!" they chant, while handing out application forms. They want to recruit new members so they can put pressure on the university directors to improve studying conditions.

"Our dorms are too small and too old," complains a 19-year-old literature student who calls herself "Melody" and sports elegant glasses. "And the opening hours for the shower rooms are far too short."

After a long search a fellow student, 22-year-old Mei Lan, has finally found a place in the overcrowded cafeteria. "There are too many students here," she complains, eating rice with vegetables and pork from her steel tray. "We stand in line in front of the library at five in the morning so we can study in peace. I had to rent a room outside the university to take my final exams because there is no room anywhere else." She shares her 12-square-meter (129-square-foot) room with seven other students. It's extremely difficult to study there and the lecture halls are booked all day.

And there's hardly any space in the lessons either. "There are between 70 and 80 students on my course," says Mei. "That means questions or discussions are just not possible." Her parents, merchants in Zhejiang Province, are paying an annual fee of 5,500 yuan (€550) for her four-year university program. The room with four bunkbeds for eight students costs an additional 650 yuan (€65) a year.

Cramped quarters, overcrowded classes, expensive tuition fees that "young people from the poor west of the country could never afford," as Mei says: That's what university life is like for students -- not just at Beijing Normal University -- but throughout China.

"There are too many students here"

And yet education and research are again considered precious goods in China -- 40 years after Mao denigrated intellectuals as "the stinking ninth category." And now a well-trained young generation is meant to transform the country into a scientific superpower, at least if the Communist Party has its way. Government and party leader Hu Jintao has declared that science and technology play an "important role in driving economic and social development and guaranteeing the country's security." 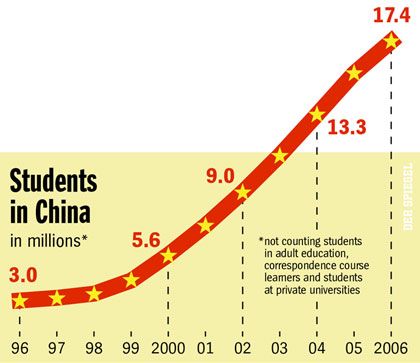 But the road to becoming an educated nation and scientific superpower is a long one. Only 5 percent of all Chinese people between the ages of 25 and 64 currently hold a university degree. The figure for the European Union is 21 percent, while in Japan it is as high as 34 percent. In order to catch up, the Chinese government is pumping more money into education every year -- about €46 billion ($62 billion) in 2006. But some representatives of higher education in China, like Xu Zhihong ( see Spiegel interview) believe that's still too little.

There are more than 1,700 public universities and technical colleges in China. But of the 8.8 million applicants who took the tough entrance exams last year, only 5.4 million made it into one of them. The remaining 3.4 million high-school graduates had to settle for a private university or look for a job -- although they can apply to study at a state-run university again next year.

Only a tiny elite -- usually systematically prepared for the entrance exams at top schools in the major cities -- successfully makes it into the best universities. The selection process is tough and school and university tuition fees are constantly rising. Indeed, higher education is becoming the privilege of members of the new urban middle class who, according to the Bank of China, are investing the bulk of their savings in their children's education instead of in new cars or apartments. For the millions of talented children of farmers and workers, on the other hand, a university degree remains a distant dream.

In order to ensure Chinese science will be able to compete internationally, most funding is now being channeled towards 38 key universities. The other universities -- some of which are heavily in debt -- will have to fend for themselves. Beijing Normal University, with its 17,000 students, along with Peking University, is part of the elite. It recently built an impressive library -- a bold glass construction with a huge projecting roof. In the foyer, students can use computers to check which of the library's 2.9 million books are currently in stock.

The campus is the size of a small town. It is equipped with daycare centers, schools, sports fields and supermarkets. Gray residential accomodation buildings for employees and professors lie between modern, austerely furbished teaching facilities. New apartment blocks have been built for postgraduate students -- but they're already too small: Four young researchers are forced to share each room.

Dozens of colorful thermos flasks stand in front of one small house. The campus inhabitants come here to fetch hot water, because there is none available in the dorms. Retired employees sit beneath the trees chatting and, at lunchtime, students flock to the cafeteria and the "Hollywood" restaurant.

But those who leave the self-enclosed university campus after their final exams can no longer expect to be automatically provided with employment, as was still the case at the end of the 1970s. Of the roughly 4 million students who graduated in 2006, one-third still didn't have a job that matched their qualifications eight months later.

One reason why the transition into the working world is so difficult is that the universities are theory-heavy and relatively far removed from practice. Even though foreign investors like Heinrich von Pierer, who leads the supervisory board at German engineering and technology giant Siemens, are full of praise for the more than 600,000 engineers and technicians that China's universities produce every year, only about 160,000 of those graduates meet the standards of international corporations and Chinese top companies, a recent study by McKinsey, the management consulting firm, found.

Experts lament that China's higher education lacks creativity and critical thought and is out of touch with the professional world. Like those who once aspired to become imperial clerks, today's students are mostly expected to acquire and demonstrate theoretical knowledge. In China, they are often mockingly called "stuffed ducks" because they are reminiscent of poultry that is force-fed by farmers to produce a culinary delicacy.

Social skills, practical experience or the ability to think for oneself are given little or no consideration in entrance exams. "China will produce no innovative talent until we change the examination system," says Zhu Qingshi, president of Anhui University of Science and Technology in Anhui Province.

Dressed in her blue anorak, literature student Mei Lan is unfazed by such considerations. She is exactly where she always wanted to be: at Beijing Normal University. Four years ago she achieved over 600 points in her exams, making her one of the best pupils from her native province. Now she is simply hoping that this mightily expanding country -- one that is discovering the blessing of scholarship -- will provide her with a good career. She would like nothing better than to become a high school teacher.