The United Nations General Assembly is widely expected to recognize a Palestinian state on Thursday, but torn between political loyalties, Germany won't be among the 193 member countries casting their votes on the controversial issue.

Foreign Minister Guido Westerwelle confirmed on Thursday that Germany would abstain on the issue, citing fears that the enhanced status could damage the peace process with Israel.

"In our view, there are doubts about whether the step the Palestinians seek today serves the peace process at this point in time," Westerwelle said. "We fear that it is more likely to lead to a hardening of the situation." While Germany supports an independent Palestinian state, this is better achieved through direct negotiations between the Palestinians and Israel, he added.

The Palestinians' bid is set to enhance their status to "non-member state" -- the same position that the Vatican holds -- which would grant them recognition as a state in the West Bank, the Gaza Strip and east Jerusalem, areas taken by Israel in 1967. It would also grant them access to the International Criminal Court, where it is thought they might try to bring war crimes charges against Israel.

Both Israel and the United States are strongly opposed to the bid, preferring bilateral negotiations instead, and both could withhold funding to the Palestinians in response. But the Palestinians are confident that they will easily garner the simple majority necessary to pass the measure, having already been recognized as a state by more than two-thirds of UN member states, with many of their sympathizers in the developing world.

The issue is much more sensitive in Western nations, though, and the Palestinians have reportedly been lobbying to convince them of their cause, particularly in Europe, where more than a dozen countries have reportedly offered their backing. Having strong European support strengthens the Palestinian bid for recognition in the face of US resistance, and they have likely found it in Austria, Denmark, Norway, Finland, France, Greece, Iceland, Ireland, Luxembourg, Malta, Portugal, Spain and Switzerland. Meanwhile the Czech Republic and the Netherlands appear to be leaning toward a "no" vote, while Britain could abstain along with Germany.

But the division among the European nations, and the failure of its economic leader Germany to make a definitive decision raises questions about the ability of Europe to take a unified approach on important issues.

"It is regrettable that once again, Europe is failing to speak with one voice," said Gernot Erler, deputy floor leader of Germany's opposition Social Democrats, in a statement on Thursday. "The German government has, through its own tactical maneuvering, failed to come to an understanding with its partners. This will further diminish the weight of Europe in the Middle East."

But Germany, a key political ally of both Israel and the US, is in a difficult spot trying to maintian balance on this issue, according to Hans Kundnani, a German foreign policy expert and the editorial director for the European Council on Foreign Relations (ECFR). "There has been a complicated shift in the region, and Germany is desperately trying to stick with its traditional policy, which is solidarity with Israel," he says.

Germany plays an important mediating role in the peace process, and the abstention may be an attempt to maintain that neutrality, he says. But it is also a reflection of the country's varied political interests on the issue, which include support of Israel as a key part of Germany's post-World War II rehabilitation, using this relationship as a means of strengthening ties with Israel's main ally, the US, and economic interests in the Middle East, he says. "That tends to produce this kind of balancing act," he says. "But either way, it will be criticized on both sides."

European Unity Was 'Never a Possibility'

Indeed, Kundnani's colleague, Director of the ECFR's Middle East and North Africa Program Daniel Levy, says an abstention -- which is a slight move away from its unwavering support of Israel -- was actually the "most forward-leaning vote" possible for Germany, given both the domestic situation and Berlin's international position. Polls show that Germans are becoming increasingly frustrated with their country's staunch support of Israel.

As for the criticism that Europe has failed to take a unified approach on an important foreign policy issue, Levy says such an expectation is unrealistic. "There was never a possibility because this is an issue that crosscuts domestic and historic issues, trans-Atlantic ties, trade relations and public opinion," he says. "I actually think that even a two-way split would be a mini-achievement."

The fact that most of Europe seems to be in support of the Palestinians' bid may also be a sign that the Continent is poised to "up their game" in the Middle East peace process, albeit slowly, he says.

Many will remember that this isn't the first time Germany has abstained from an important UN decision in the recent past. Last year, Berlin was heavily criticized for opting out of the Security Council vote that established the no-fly zone in Libya. Could the latest non-decision invite a similar reaction?

The situation is different on two levels, says Kundnani. First, while Germany is isolated from some of its European partners in a similar way this time, it hasn't necessarily broken with the tradition of US and European solidarity as it did on Libya, he says.

"And on this question, Germany is closer to the US than many other European countries," he adds. "I don't think Germany stands out quite in the same way it did with Libya." 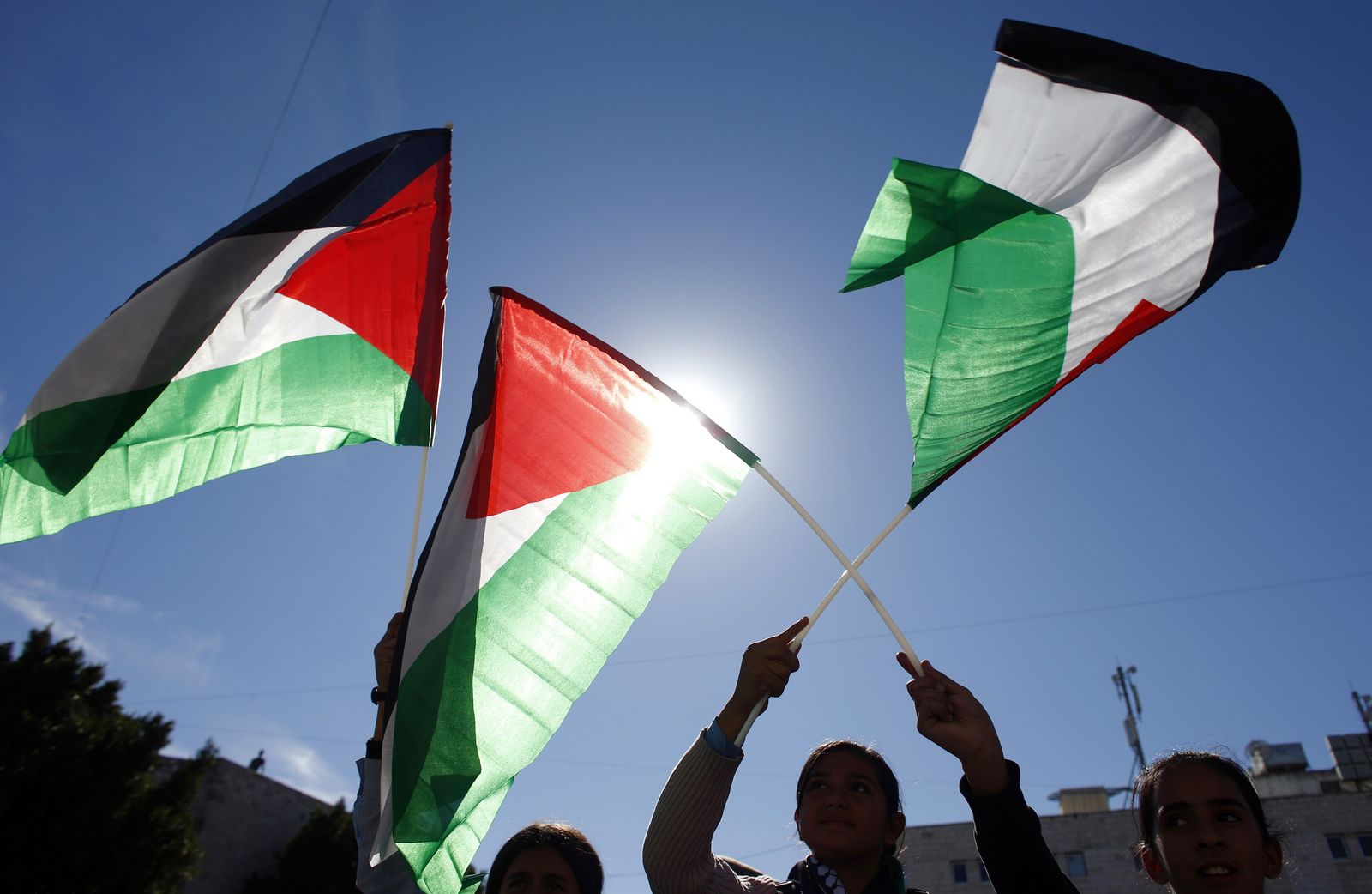 Palestinians demonstrate in the West Bank in support of their bid for recognition of statehood at the United Nations.