Old Ganya is one of the last of her kind: the people of Chernobyl. The 78-year-old wraps a white scarf around her head and tames her unruly eyebrows with a comb. Then she steps out of her wooden hut and walks across the courtyard with small steps. The syrupy tree sap trickling from the large maple tree behind her house gives her "the strength of the bear and the agility of the rabbit," she says. "I'm not afraid of the radiation."

The Ukrainian farmer returned to the restricted zone only a year after the massive explosion at Chernobyl. She refused to simply forget her native village of Kupowate. "I prayed for Jesus to walk in front of me, so that the guards wouldn't catch me," says Ganya. More than 1,000 others like Ganya also returned home illegally.

Now the "Zone of Alienation," as the restricted area around Chernobyl is officially called, is slowly losing its population. Only about 300 residents, most of them old and frail, persevere in the 4,300-square-kilometer (1,660-square-mile) area. The people of Chernobyl are dying out.

Unlike the elderly Ganya, the rest of the world would be all too pleased to forget about Chernobyl and the surrounding villages, and with them all their problems: thousands of square kilometers of contaminated soil, radioactive seepage, the crumbling sarcophagus, all the past mistakes and the ongoing lack of funding. The global community has argued over the future of the contaminated area at four donor conferences since 1997.

Before the 25th anniversary of the disaster on April 26, experts met once again in Kiev. Still under the impression of the massive nuclear disaster in Japan, the European Union and the governments of 28 countries have now promised to provide €550 million ($780 million) to build a new containment, although €190 million are still needed for the new shell. It is designed to cover the old sarcophagus the Soviets built in only 200 days in 1986.

So far, engineers have had great difficulty preventing the collapse of the dilapidated ruin. If it did collapse, another cloud of radioactive dust would rise up from the site. But will the money truly help prevent this from happening?

Some €864 million had previously been pledged for the construction of a new containment, and much of that money has already been used up. The German Environment Ministry warns in a report of "substantial project risks" and criticizes the lack of transparency in the use of funds. Most critically, there is no long-term plan for dealing with a radioactive legacy that will remain for several millennia.

Work on the new sarcophagus hasn't come far. Surveillance cameras and three rows of barbed wire protect the construction site. All photography and filming is forbidden, "out of fear of terrorist attacks," explains project manager Viktor Salisezki. Some 500 employees of Novarka, an international consortium, are currently preparing the site for the planned construction of the new structure.

Men in white overalls are driving one of the 396 piers that will form the foundation of the massive structure 25 meters (82 feet) into the contaminated ground. The new semi-circular shelter will be 105 meters high, 150 meters long and 257.5 meters wide -- a hangar four times as large as Hamburg's main train station.

Not a Long Time

Salisezki's men are assembling 18,000 tons of steel, more than was used for the Eiffel Tower in Paris, for the frame alone. To protect the workers from radiation, the construction site is located several hundred meters from the reactor. The project manager hopes that the sarcophagus will be ready by the fall of 2015, which would be 10 years later than originally planned. It will then be pushed over the reactor along special rails. Moving the steel structure alone will take two weeks.

"The new shelter will last 100 years," says Vladimir Rudko of the National Institute for Nuclear Power Plant Safety. And that, he adds, isn't a very long time. Rudko, a thickset but soft-spoken man, has already devised a timeframe for the complete disassembly of the ruined reactor. "First we have to develop the necessary technology," he says, "and then we'll need another 40 to 50 years for the salvage operation."

However, Rudko adds, no one knows where the radioactive wreckage of the ruined reactor and the roughly 30,000 tons of material containing fuel are to be stored. In eastern Ukraine, where there are many mines and tunnels, the population is strongly opposed to a permanent repository. As an alternative, Rudko proposes drilling a deep shaft in the restricted zone.

He doesn't like temporary solutions, perhaps because he himself is still working in a temporary location. His office is on the third floor of the Chernobyl kindergarten, evacuated in 1986, where colorful drawings of butterflies still adorn the building's entrance.

Rudko's office is where the data taken from the interior of the old sarcophagus is collected. Hardly anyone is more familiar with the countless cracks and holes in the old shell than Rudko. But he also knows that 40 percent of the reactor's interior still hasn't been investigated. How far down into the concrete foundation has the nuclear lava penetrated? How great of a threat is it to groundwater? No one knows the answers.

"We have to disassemble and dispose of the reactor. We owe that much to our grandchildren," says Rudko. So far, however, there is neither a plan nor funding for such an undertaking.

Instead, short-term measures to limit the damage will have to suffice for the time being. To prevent the radioactivity from continuing to spread, members of the fire department stand guard on high observation towers in the summer. Forest fires could release radioactive materials that have accumulated in the ground and in plants. In 1992, for example, a large fire blew radioactive particles all the way to the Lithuanian capital Vilnius, about 500 kilometers away. The fine particles are highly carcinogenic if they enter the human body.

The fuel rods from the still-intact Chernobyl reactors 1 to 3 present another problem. About 20,000 radioactive fuel rods have been kept in temporary cooling ponds for years. The nuclear experts with Greenpeace Russia fear that these wet-storage facilities are now more dangerous than the ruined reactor itself.

The French nuclear company Areva was building a new storage complex until 2003. But the concrete began to crumble in the first Ukrainian winter, and cracks had to be filled with plastics. Furthermore, the storage facility had already proven to be too small for the old fuel elements. And the facility has been empty for years, a memorial to the costly planning errors at Chernobyl.

A US company is now set to build a new temporary storage facility at an estimated cost of at least $300 million. "It's become something of an international sport to blow as much money as possible on Chernobyl," says Vladimir Chuprov, a nuclear expert with Greenpeace Russia.

Theft and nepotism threaten to drive costs up even further. The German Environment Ministry warns that it is sometimes difficult for the donor countries to "comprehend the cost increases in detail," because the Ukrainian authorities are playing their cards so close to their chests,

They are also acting arbitrarily. In 2009, for example, the Ukrainian nuclear regulatory agency, ignoring the concerns of Western experts, approved the construction of a permanent repository bunker for low and intermediate level radioactive waste.

Meanwhile, the water problem remains unresolved. Each month, 300,000 liters of radioactively contaminated water have to be pumped out of the plant. Some of it is precipitation that enters the sarcophagus through cracks and holes. And some of it is groundwater, which has risen artificially as a result of the 22-square-kilometer cooling water reservoir.

Alexander Antropov, 53, a Chernobyl veteran, is charged with pumping out this basin. He worked in the nuclear power plant for three years, and until the day of the disaster he lived in a prefabricated building on the "Street of the Heroes of Stalingrad" in the nearby city of Pripyat. Now he is worried that radioactivity could be flushed into the Pripyat River.

"We have to lower the water table, or else cesium-137 and strontium-90 could percolate into the groundwater," he warns. Through the Pripyat, these substances could reach the large Dnieper Reservoir north of Kiev, which provides drinking water to the Ukrainian capital Kiev 90 kilometers away.

Meanwhile, a small group of Chernobyl tourists is walking along the streets of the abandoned city of Pripyat, now overgrown with trees. The head of the Chernobyl Interinform agency advises his charges not to stray from the group. But his concern does not stem from radiation but from the predators that now hunt amid the ruins. "The people have left," he says. "Pripyat is now the territory of wolves and bears." 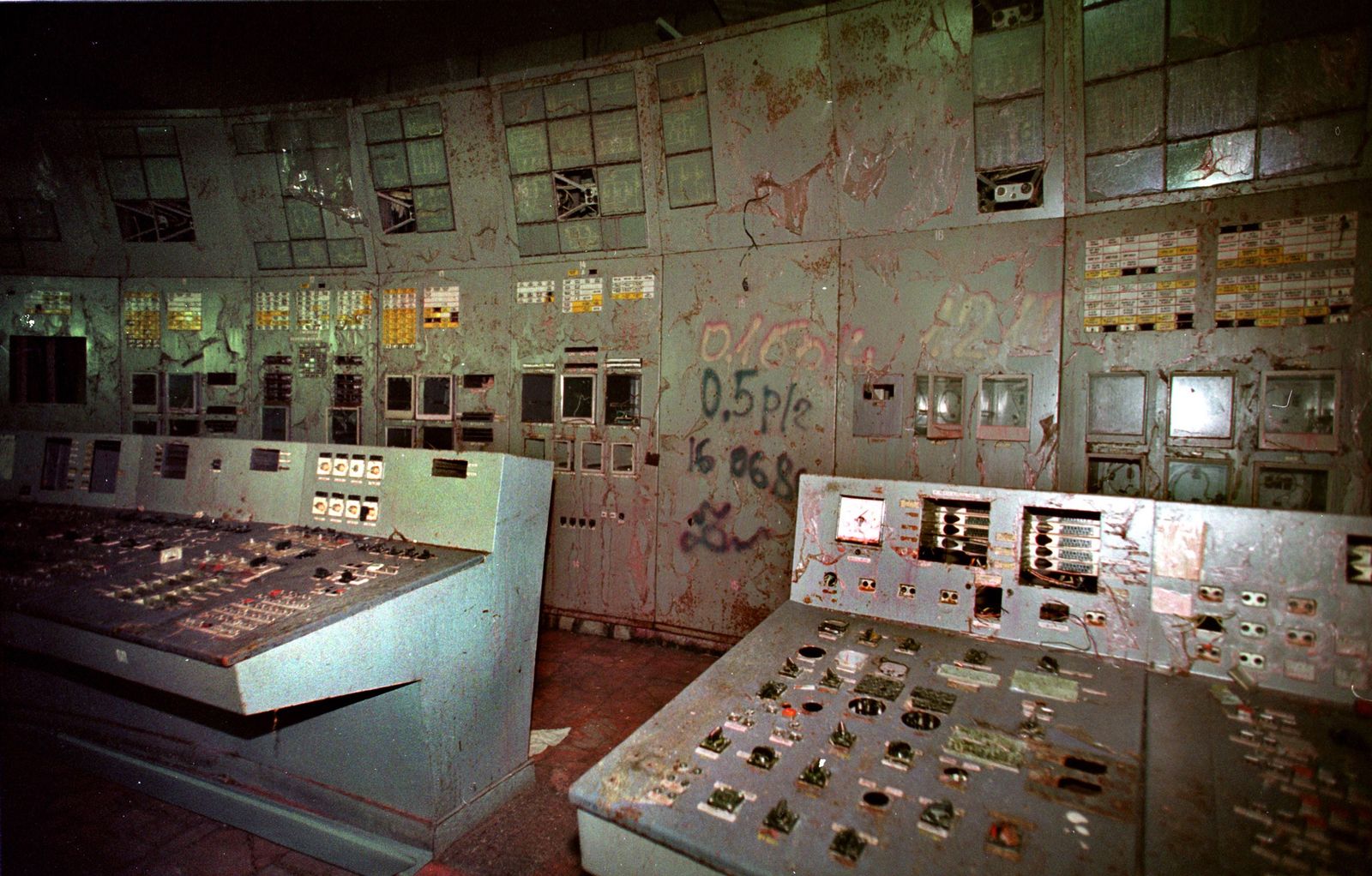 A look inside the control room of Chernobyl reactor 4, which blew up on April 26, 1986.