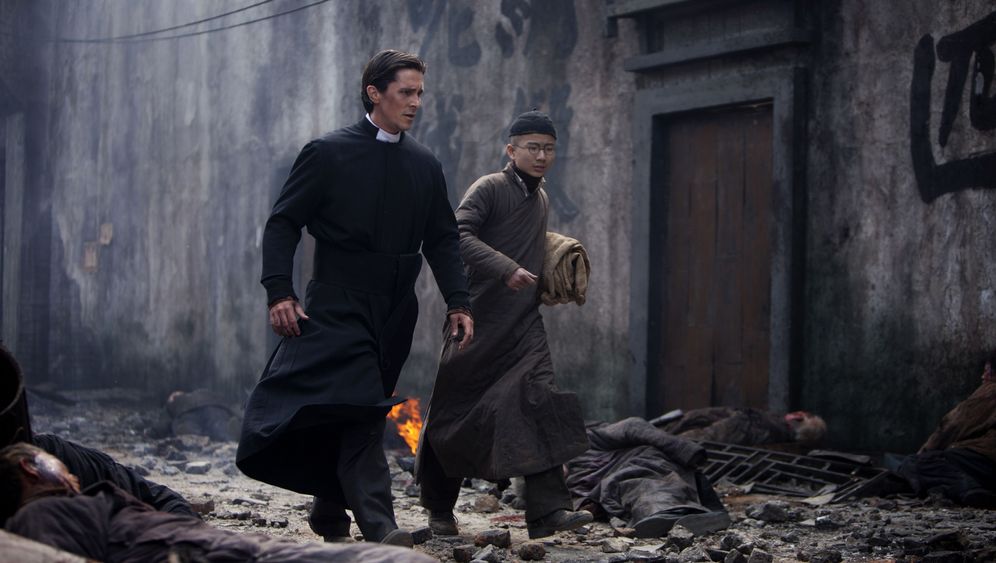 Zhang Yimou has seen just one German film, viewed on a pirated DVD. "The wiretapping film," he explains, placing his hands over his ears to resemble the headphones worn by actor Ulrich Mühe in his most famous role: as an agent of the Stasi, or East German secret police, in the 2006 German feature film "The Lives of Others." "Many Chinese people like that film," Zhang says with a smile.

What he leaves unsaid: "The Lives of Others" is a portrait of a dictatorship persecuting and corrupting its best artists.

Director Zhang, 60, is in his offices in a high-rise in southern Beijing. Outside, the city is mired in smog; inside, next to an IKEA couch, stands an air purifier, the new status symbol for wealthy, urban Chinese. The Chinese edition of the Steve Jobs biography is lying on a conference table and the walls are decorated with posters of Zhang's films, such as "Raise the Red Lantern," "Hero" and "House of Flying Daggers."

Zhang Yimou has been making films for 25 years. He's China's best-known director in the West and a star here at home. Zhang's career can be seen as an allegory for China's ascent to world power status, but it can also serve as an example of the toll that ascent takes.

Zhang made his directorial debut in 1988 with "Red Sorghum," which won him a Golden Bear, the highest award at the Berlin International Film Festival, or Berlinale. Some of his subsequent films were banned in his home country, yet he was tapped to direct the opening and closing ceremonies of the 2008 Summer Olympics in Beijing. His is a unique career, even by Chinese standards.

This week, Zhang will be back in Berlin, where his new film "The Flowers of War" will show at the Berlinale, although this time as an "out of competition" selection, meaning it's not in the running for the festival's Golden or Silver Bears. The main objective is to get the film into global distribution, and to that end, an agency in Los Angeles is overseeing its marketing. The film's presentation at the Berlinale marks the high point of a global publicity campaign, with China stepping up to challenge Hollywood.

"The Flowers of War" is the most expensive Chinese film ever made, with production costs of $94 million (€72 million) and a Hollywood star in the leading role: British Oscar winner Christian Bale, famous for his portrayal of Batman. Bale, too, is expected in Berlin this week.

In "The Flowers of War," Bale plays a fictional American who becomes entangled in a real life tragedy -- the 1937 Nanjing Massacre, also known as the "Rape of Nanking," one of the worst war crimes of the 20th century, in which Japanese troops murdered or raped hundreds of thousands of Chinese citizens when they occupied the city, then the capital of the Republic of China. That period strains relations between China and Japan to this day.

"China's younger generation doesn't know much about the events in Nanjing," Zhang says, something he noticed while working on the film. "But almost everyone here knows 'Schindler's List.' Hollywood movies have a big influence on us in China. What we need to do now is further develop our own film industry. We need to produce films that Chinese people want to see -- and, of course, foreign audiences as well."

The Politics of Cinema

Cinema in China is a political matter, and no one personifies that better than Zhang, who was born in 1951 and is therefore just two years younger than the People's Republic of China itself. His father fought as a soldier with the Kuomintang's army -- in other words, against Mao Zedong's Communists.

At first, the soldier's son wasn't allowed to attend university. For years, Zhang Yimou had to work in agriculture and at a textile factory. Not until 1978, after the Cultural Revolution ended and a cautious measure of liberalization began in China, was he admitted to university in Beijing. Artist Ai Weiwei was a fellow student but, Zhang says, "we studied in different departments, he in painting and I in film."

Zhang directed his first film in 1987. "Red Sorghum" told the story of a young woman living in rural China in the 1930s, who manages to maintain her dignity until the point when Japanese soldiers arrive, sowing death and destruction. "Red Sorghum" caused a sensation at the 1988 Berlinale. Zhang portrayed China as the West had never seen it before, strong-willed, creative and full of life -- the film was a celebration of the strength of the individual. Zhang also gave world cinema a new star, leading actress Gong Li, who became Zhang's partner when he left his wife for her.

The Golden Bear for "Red Sorghum" was China's first-ever festival success in the West, and it caused unease on the part of some cultural bureaucrats in Beijing. After the regime's tanks crushed the 1989 student protests at Tiananmen Square, censors started making Zhang's life difficult. They suspected, and were not entirely wrong, subtle criticism of the regime. "Raise the Red Lantern," for example, the 1991 film that is perhaps Zhang's best work, presents itself as a marital drama, but hides a deeper study of a system of violence, an examination of assimilation, resistance and the resulting consequences. The heroine of the film ultimately goes insane.

At this point, Zhang was producing his films with financial backing from investors in Hong Kong and Japan. Often, filming took place in China, but the footage was developed and edited abroad, keeping it out of the reach of the Chinese authorities. The bureaucrats then took revenge in their own way, by banning "Raise the Red Lantern" and other of Zhang's films from Chinese theaters. Those bans "have never officially been rescinded," the director says. His films achieved popularity within the country as videos distributed on the black market.

In 1994, when Zhang wanted to travel to Cannes to receive an award, Chinese authorities refused to issue him a travel permit. They forbade him from giving interviews to Western journalists, or advised him not to comment publicly on certain topics.

Change in the New Millennium

The new millennium brought a radical change to Zhang's work. "Hero," nominated for an Oscar in 2003, is an action film that celebrates a despot, the King of Qin, who founded the first Chinese Empire more than 2,200 years ago. The king was responsible for the construction of the Great Wall of China, but also for the empire's transformation into a police state, as well as the assassination of countless political opponents. Mao Zedong liked to invoke the King of Qin to justify his own megalomania. "Hero" seems to express sympathy for the firm hand with which China's current leadership rules.

And Zhang has held to that course. More recent films such as "House of Flying Daggers" and "Curse of the Golden Flower" are sumptuous period pieces, no longer set among everyday Chinese citizens, but at the courts of dynasties from the distant past. Intricately choreographed crowd and battle scenes have become more important than psychology.

The development in this direction reached its peak with Zhang's opening ceremony for the 2008 Olympics in Beijing. The director used thousands of extras to form majestic, geometric patterns, a triumph of the masses over the individual. The New Yorker magazine compared Zhang to Leni Riefenstahl, the notorious director of propaganda films for the Nazi Party.

The charge that he's transformed from dissident to propagandist offends the director. "A lot of people think I'm close with the regime, but that's not true," he says. "On the contrary, because I'm so well known, the authorities watch me particularly closely."

So, is Zhang Yimou a member of the Communist Party? The director gives a booming laugh. "No," he says. "The considerable progress in this country consists of the fact that I can answer that question at all, and that I can talk about the fact that my father was in the Kuomintang. That wouldn't have been possible 20 years ago."

Still, the question remains: Which has changed more since Zhang began his career -- China, or the director himself?

"I believe I've remained true to myself," Zhang says. "Under a variety of circumstances, I've shot a variety of films. That shouldn't be confused with political views." In choosing his subject matter, he adds, he's always dependent on his financial backers. "The producers do the negotiating with the film authorities over approval," he explains. "I, myself, am not allowed to contact the authorities. No one can predict whether censorship will be abolished in 20 or 50 years. No one knows that, it's not even something we dream about. We simply hope it will ease somewhat."

It's generally considerably easier to get approval, Zhang adds, if the story takes place in the past.

Zhang's new film, "The Flowers of War," is based on "The 13 Flowers of Nanjing," a novel about the massacre. In the film, more than 20 young Chinese women hide from Japanese soldiers on the grounds of a Catholic church in Nanjing. These include female students from the convent school, as well as uninvited guests in the form of a dozen high-class prostitutes in slinky silk dresses. An American mortician named John Miller (Christian Bale), likewise stranded at the church during the fighting, becomes the women's reluctant protector. "This is not a film the government would normally approve readily," Zhang says. "Foreigners, religion, World War II, these are all complex topics. But it's also a film about the willingness to help others, which is why the government lent it its support."

It's true that the Nanjing Massacre was long a taboo subject in China, all the more so because the Kuomintang ruled the city at the time it occurred. Zhang's slow-motion, dramatic portrayal of courageous Chinese people dying in their attack on a Japanese tank serves first and foremost to aid China's reconciliation with its own past. Zhang also follows the official version of history, in that he seems to know only two types of Japanese: the evil and the really evil.

A clear concept of who the enemy is, no great fear of clichés, plenty of pathos and a bit of sex, Zhang's film shares these components with many war films produced in the West. "The Flowers of War" marks his permanent renunciation of art films for niche audiences.

In China, meanwhile, Zhang's film was the year's most successful local offering, trumped only by American imports such as "Transformers 3."

"People in China have been talking for years about stepping out into the world, into the economy, sports and culture," Zhang says. "That's something the entire nation wants. Films are no exception."

Chinese President Hu Jintao recently published an essay in a party magazine in which he lamented: "We must clearly see that international hostile forces are intensifying the strategic plot of Westernizing and dividing China." Hu suggested that China needs to intensify efforts to develop its own cultural products, and "should deeply understand the seriousness and complexity of the ideological struggle," adding that "the international culture of the West is strong while we are weak."