Once a week, the calendar of the approximately 40 executives at BioNTech, the research firm located in the southwestern German city of Mainz, includes a 90-minute appointment that cannot be rescheduled. At the BNT162b2 meeting, all vaccine-related divisions must present what they are currently working on to the board. They explain if the expansion of production is proceeding quickly, for example, or which approaches against the new mutants are being discussed.

In mid-January, there was a question on the meeting program that many parents have recently been asking themselves with ever greater urgency: When could the vaccine be approved for children?

At the time, the subject still seemed far away. Back then, the first doses of the Pfizer/BioNTech COVID-19 vaccine were being distributed globally and the entire company was concentrated on manufacturing more vaccine with the goal of delivering more, as fast as possible, to billions of adults.

Because children have a different physiology than adults, drugs for people under the age of 18 need to be examined and approved separately – a costly, lengthy process that usually takes years.

In January, the BioNTech researchers responsible for the clinical trials hoped to have the vaccine approved for all age groups by the spring of 2022, an unusually fast approval compared to the normal sequence of events.

But for Uğur Şahin, BioNTech’s CEO, and Özlem Türeci, its chief scientist, that was still far too slow. Both were especially worried about the new virus variants that were already becoming rampant – much more contagious, aggressive mutants like B 1.1.7. By summer, most adults would potentially be vaccinated, Şahin told the group, and herd immunity would strongly curb the virus, but what if children continue to be exposed to a mutated and potentially more dangerous virus in schools and daycare centers without protection?

"Children are particularly well protected by the vaccine"

At the January meeting, both BioNTech founders therefore made it an important priority to develop a vaccine for children. They set a clear goal: Before next winter, the vaccine is to have been tested for all children older than daycare age with the goal of having it approved for all age groups in September.

Things moved much faster. "We are well on our way to achieving these goals,” Şahin now says, a good three months later. "It’s very important to allow children to return to normal school routine and to make it possible for them to meet with family and friends.”

On Friday, the company applied to the European Medicines Agency (EMA) for approval of the BioNTech vaccine for children 12 and older. The evaluation usually takes a few weeks. The first schoolchildren could therefore be vaccinated by early June.

The second clinical trial, which involves around 4,600 young children, is also in the advanced stages. Vaccinations are being carried out in descending age order: If the 10-year-olds tolerate the vaccine well, then it’s the nine-year-olds’ turn. BioNTech have now reached the youngest group: children of six months and older.

"In July, we could have the first results for the five- to 12-year-olds, and in September for the younger kids. The evaluation will take about four to six weeks,” says Şahin. "If everything goes well, once the data has been evaluated, we can submit the request for approval of the vaccine for children in the respective age group in different countries.”

The BioNTech CEO is confident because, according to the study data they have already collected, the vaccine was 100 percent effective and well tolerated in kids above the age of 12. According to Şahin, these "encouraging results” suggest that "children are particularly well protected by the vaccine.”

Doses for Children Would Be Produced Separately

If the timeline does pan out, the consequences would be wide-reaching. Children have been hit especially hard by the pandemic since the first lockdown, when even playgrounds were closed for months.

Studies suggest that many children and youths will suffer far more than adults from the pandemic’s long-term psychological consequences, given that they have more difficulty compensating for and coping with the loss of social contacts.

In a representative online survey carried out by Hamburg’s Eppendorf University Hospital, 40 percent of children and adolescents between the ages of 11 and 17 said they had a reduced quality of life during the pandemic. One-third suffered from depressive symptoms and 44 percent had sleep disturbances.

Children from poor and educationally disadvantaged households are getting set back even further by the sometimes months-long school closures. It has also become clear in recent months that even young children can, in rare cases, become seriously ill with COVID-19.

If 12- to 17-year-olds are vaccinated in a span of a few weeks, then younger children could potentially get vaccinated starting in the fall, allowing a speedier return to normal operations for schools and kindergartens. This, of course, under the assumption that children won’t be relegated to the back of the vaccination queue.

Just last week, German Chancellor Angela Merkel said she would lift vaccine prioritization in Germany in June. Shouldn’t all school-age children then be vaccinated to allow a safe return to in-person teaching?

Because children and teenagers would have to be vaccinated with existing vaccine stock, this would mean that many 40- to 50-year-olds would need to potentially receive their doses later.

Younger people would get the vaccine in lower doses – probably only one-tenth of the dosage for the smallest.

Starting in late summer, BioNTech would produce the children’s doses separately. It’s unclear if these would be subtracted from the originally planned adult deliveries or if an additional contingent is possible.

"Children have the right to the best possible medical care"

This once again raises complicated ethical questions. What is desirable – and what is morally acceptable?

"Looking to countries like India, where millions and millions of vaccine doses are urgently needed for the elderly, we need to think about whether scarce vaccine doses are really best given to children in rich countries,” argues Harvard epidemiologist Michael Mina, for example.

Others believe that vaccinating adolescents, at the least, is inevitable. Virologist Angela Rasmussen of the Canadian Vaccine and Infectious Disease Organization (VIDO-InterVac) argues that there’s "no getting around it.” She explains that adolescents have especially large numbers of contacts outside of their own households – much more than, for example, six-year-olds.

To vaccinate 80 to 85 percent of the population, children will probably also have to be included in the vaccination campaign. This would be the only way to prevent the virus from spreading if it returned. "Only when children and youths are vaccinated with a vaccine that is approved for their age group can the pandemic be brought to an end,” says Jörg Dötsch, director of the Department of Pediatrics and Adolescent Medicine at the University Hospital of Cologne and the president of the German Society of Pediatrics and Adolescent Medicine.

As so often in this pandemic, the situation raises questions of solidarity and fairness, and about what the country’s top priority really is. A case has been made everywhere in recent months that schools and education are important not only for children and young people but for the future of the knowledge-based economy. But this has led to few concrete actions. School digitization hasn’t been successful, and schools haven’t been outfitted with technology like ventilation systems.

"According to the UN Convention on the Rights of the Child, children have the right to the best possible medical care,” says Thomas Fischbach, the president of Germany’s Professional Association of Pediatricians. "We therefore see it as right and necessary that children be immunized against COVID-19.” He argues that denying them immunization would jeopardize school reopenings and the younger generation’s participation in society. "It would be discriminatory,” Fischbach says.

But first, BioNTech must successfully complete the pediatric studies and prove that the vaccine isn’t just effective but also harmless. Wolfgang Becker-Brüser, the editor of Arznei Telegamm, an industry-critical journal, argues that this is far from certain.

"Children are a developing organism,” the physician and pharmacist explains, "they react differently to many things, so you can’t simply extrapolate from studies with adults to children.”

Pediatric investigative plans have been arranged with the European Medicines Agency (EMA) for all four COVID-19 vaccines that have been approved to date – BioNTech, Moderna, Johnson & Johnson and AstraZeneca. These plans specify which clinical studies on children and youths are necessary to prove that a vaccine is safe and effective in all age groups up to 18 years.

In response to a query from DER SPIEGEL, the EMA said that the clinical studies for testing vaccines on children are built so that, after the vaccine is first approved for adults, it is tested in adolescents and then, step by step, on children under 12, and in the youngest age groups. Once data shows the vaccine is safe and provides a good immune response in one age group, the researchers can submit data for market approval in that age group. If the data is very good, the length of the study can be shortened, it said.

According to BioNTech, there have been no signs of side effects thus far. Very rare adverse effects, however, wouldn’t show up until the vaccine’s introduction to the market, and after hundreds of thousands or millions of children and youths have been vaccinated. It is therefore important that the individual benefit-risk assessment for children is clearly positive. "Anything else would be unethical,” says Dötsch.

The German Society for Pediatrics and Adolescent Medicine favors COVID-19 vaccinations for children. That’s because young people may be less likely to contract COVID-19 than older people, but they are still not completely safe from the virus. Long COVID has been known to occur in children. In countries with especially high case numbers, like in Brazil, hundreds of children have reportedly died from the disease.

An estimated one in a thousand infected children also contract Pediatric Inflammatory Multisystem Syndrome (MIS-C). It occurs when – weeks after a COVID-19 infection, which is often asymptomatic – a misdirected immune system leads to violent inflammatory reactions in several organs. Numerous children have had to be hospitalized, including some in intensive care.

"We believe things can now happen pretty fast,” Şahin says. "The observations thus far on tolerability and efficacy are encouraging.” People around the world want to have their normal lives back, the BioNTech CEO says. "Especially our children.” 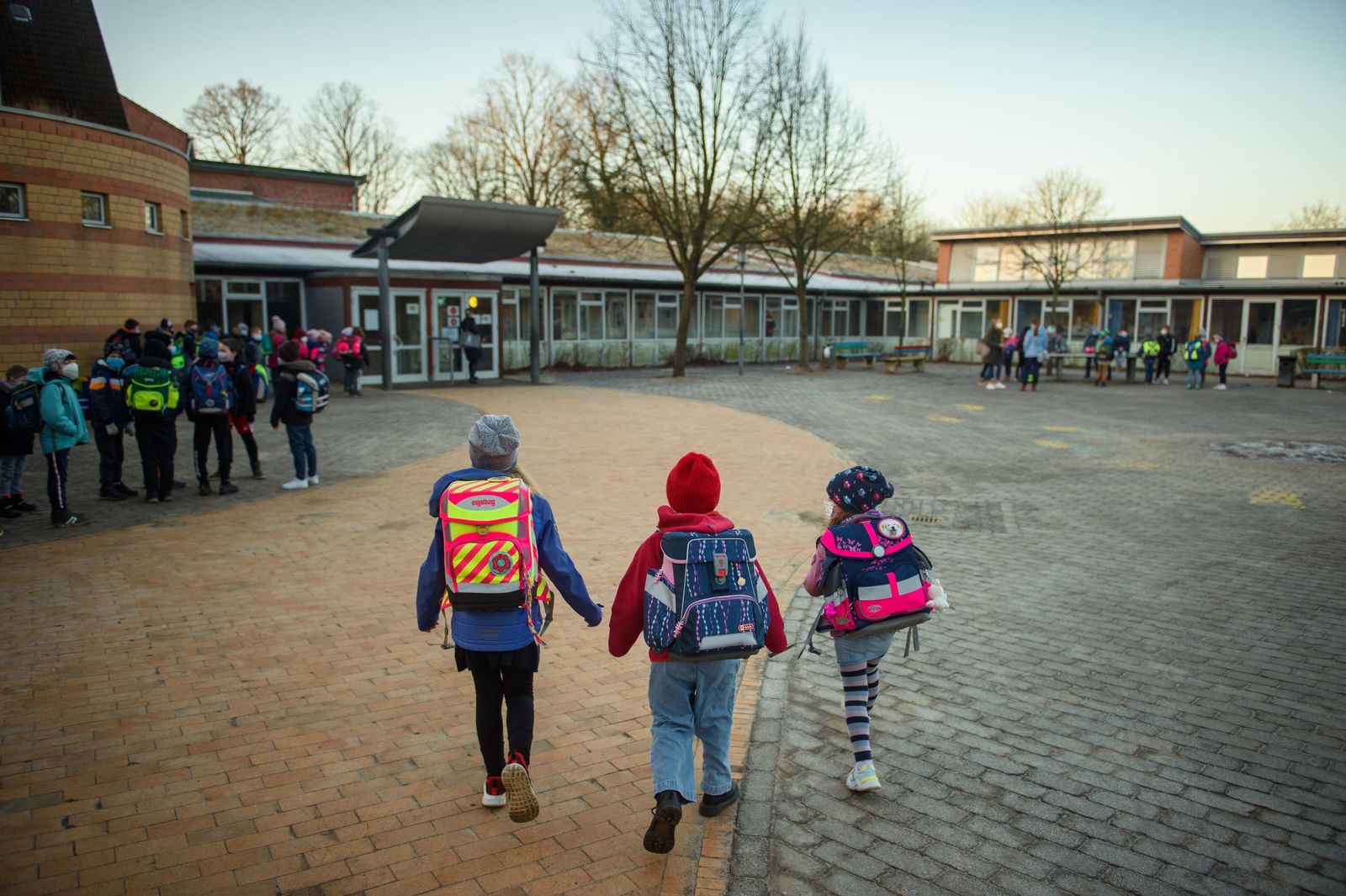 Children on their way to school: "It as right and necessary that children are immunized against COVID-19." 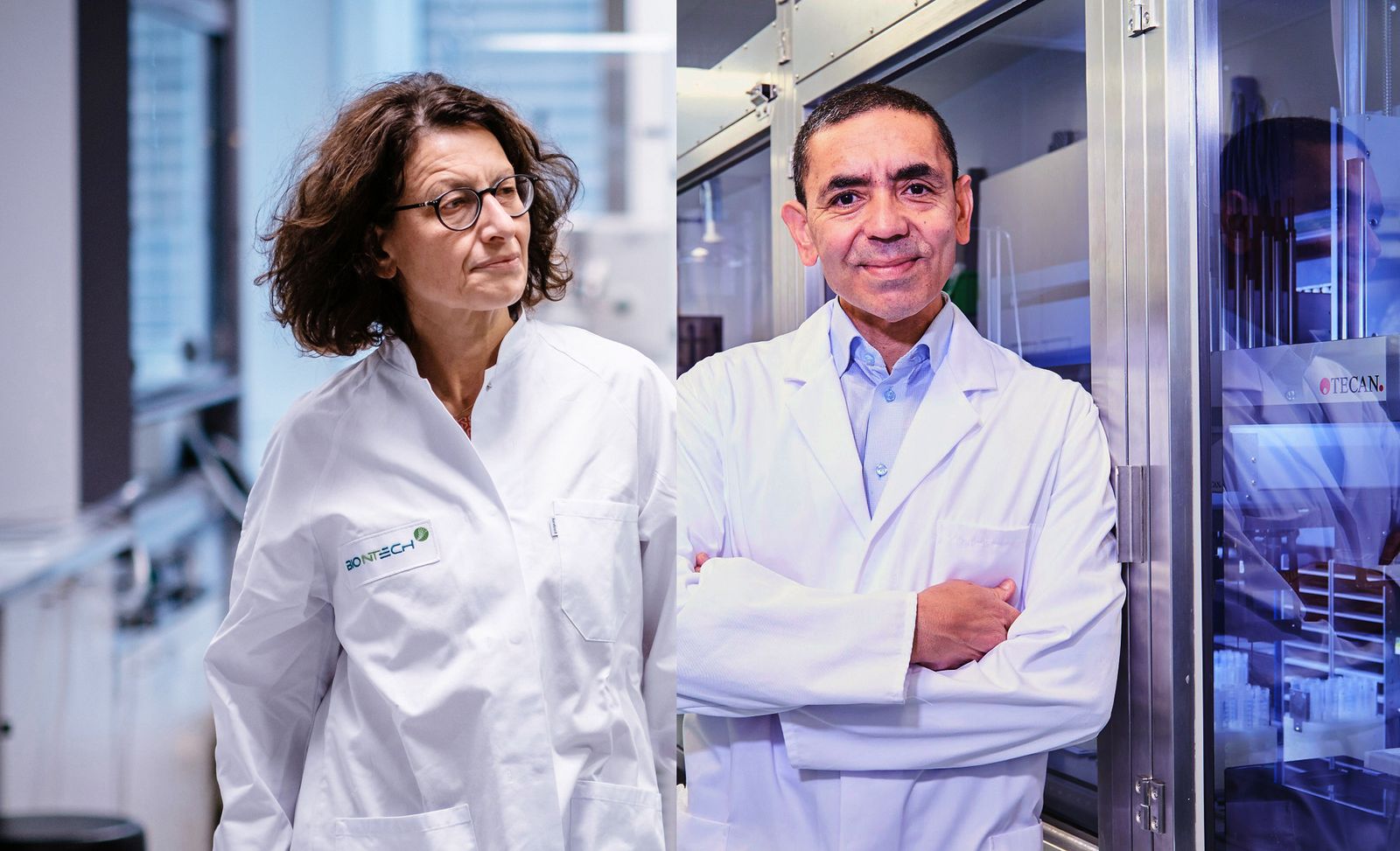 BioNTech heads Özlem Türeci and Uğur Şahi: "We are well on our way."